For just two short weeks (which already began on Tuesday), César’s at The Ritz-Carlton, Kuala Lumpur will be hosting a food promotion themed Arabian Nights. Serving an array of culinary delights from the Middle East such as Fatayer, Tabouleh, Baba Ghanoush, Basbousa and Malabi, the evening will definitely dazzle and captivate you with its fine cuisine and rather seductive entertainment. 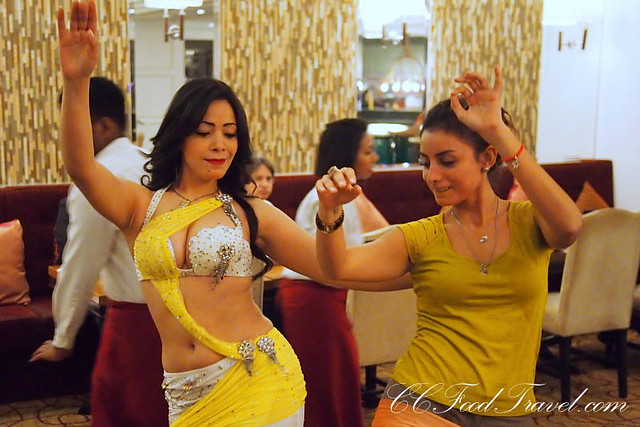 And obviously, food is evocative. It is the bit of culture that lingers even when language might be a barrier, and like Italians, Indians or the Chinese, Middle Easterners can be especially emotional about cuisine because it is such a core part of their culture. 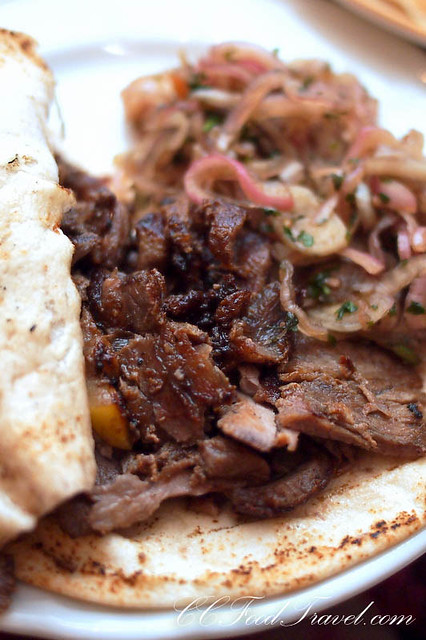 And thanks to The Ritz Carlton KL, this culture will be brought to our doorstep in the form of a food promotion from the 13 – 27th August, at RM168++ per head. Not only will there be a huge spread of exotic, Middle Eastern food (served ala carte style), but there well be a rather nubile belly dancer, named Rogina, who will gyrate and titillate to the sounds of an Egyptian band with live percussions and contagious Arabic rhythms. We missed the singer, Mai, who only made an appearance later in the night, but we heard she has an amazing voice too. 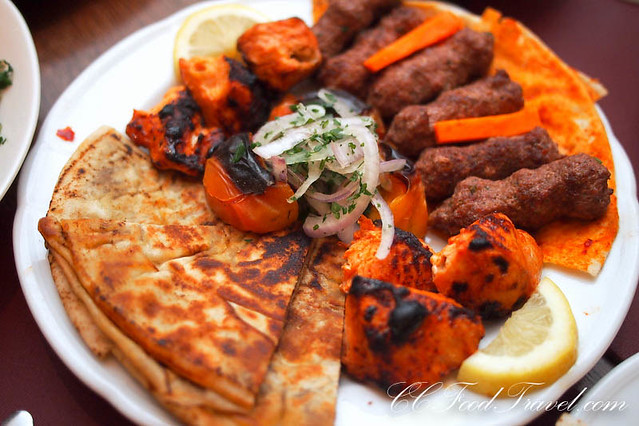 And if you get to watch Rogina glide and shimmy across the floor, you will definitely be mesmerized by her hypnotic movements. Each shimmy and graceful undulation, an expression of strength and femininity, and she executes this so well. The best thing about the performance is the crowd participation and how engaging the performers are. One of the best bands and belly dance I have seen in a long time. 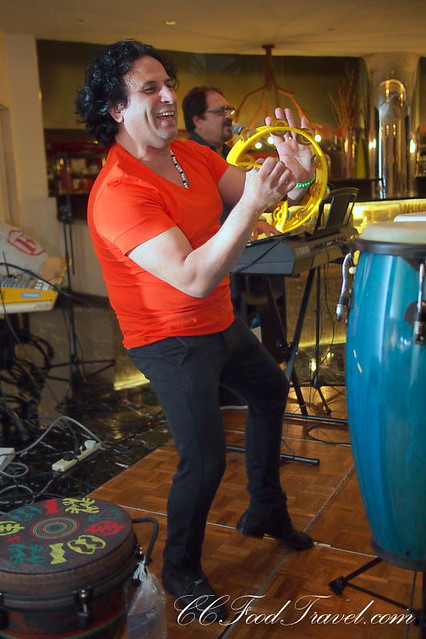 the percussionist was very entertaining and a real crowd motivator 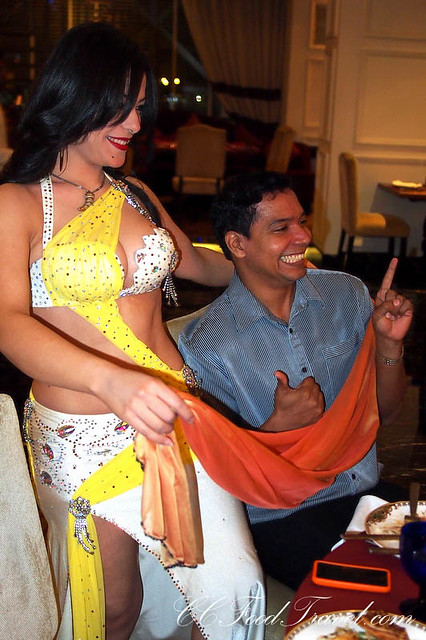 oo-lala… Caning feeling the heat… but not from the food!

So what about the food? Well, for the first course we had, a vegetable platter, mutabal, hummus tahini, baba ghanoush, tabouleh as well as fetush. But wait that was not all.. the waiter kept bringing out, one serving plate, after another, laden with fatayer, kibbeh, falafel, samosa and wara ainab. 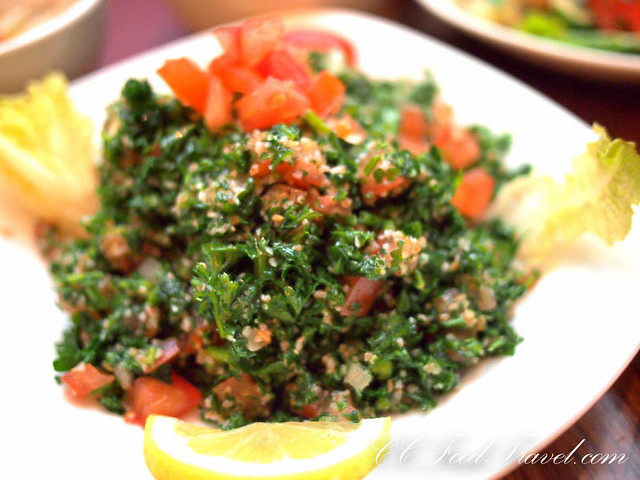 I loved the generous servings of hummus – a super creamy mash of chickpea dip made with tahini, olive oil, garlic and lemon juice. It was an enticing appetizer, served with pita bread. And perhaps the most widely recognized Middle Eastern food is falafel. The fried balls made of chickpeas, onions and spices make for a tasy appetizer or light vegetarian meal. Falafel makes a great sandwich inside pita bread with veggies as well. 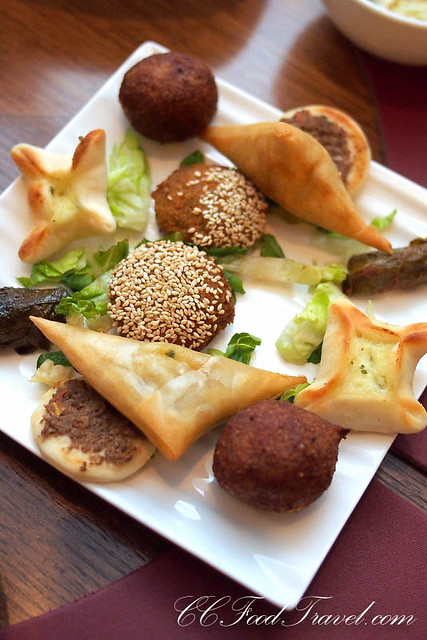 Then there was the Fatayer or Fitiir – an Arab meat pie pastry that is stuffed with spinach (sabaneq), or cheese (jibnah). Apparently this is eaten a lot in countries such as Kuwait, Turkey, Syria, Palestine, Egypt, Lebanon, Jordan, and other Arab countries in the region. 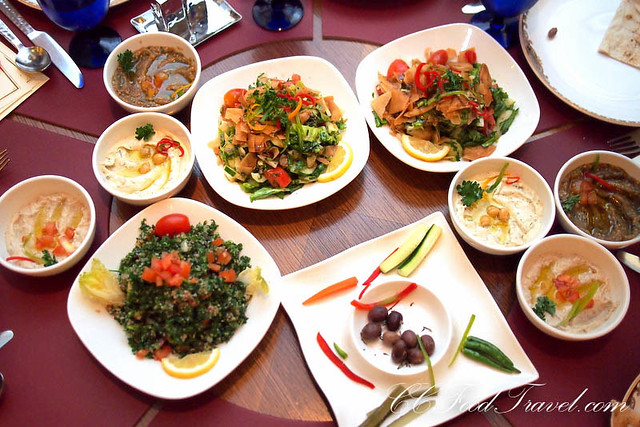 And my favorite side dish that I like to eat with everything (especially the heavier meats) is the Tabouleh. This deep green, super tasty salad has a nice “kick” to it. It makes a great alternative to a traditional salad – tabouleh is made of mint, parsley, tomato, cucumber, olive oil, and a generous dousing of lime juice. Love the way the lime infused tabouleh cuts through the grease in the other dishes. 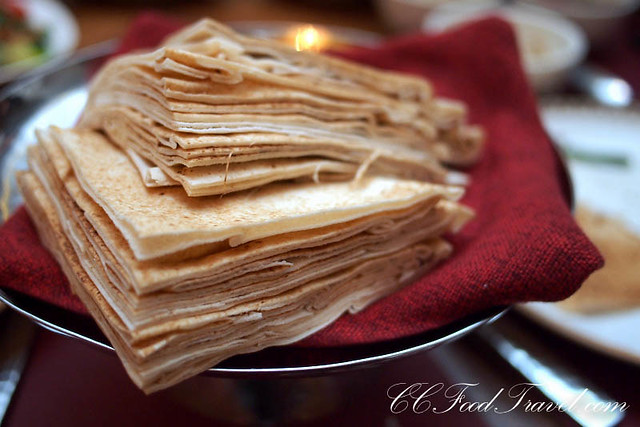 Pita or Khubz bread is so simple yet incredibly tasty. Warm, toasted, stuffed, or dipped, pita bread is the most heavenly thing on earth, and I like mine accompanied by hummus or grilled lamb and pickled onions. Baba ghanoush is another hot vegetarian favorite. Its smooth and creamy texture makes it ideal for dipping pita bread or vegetables. 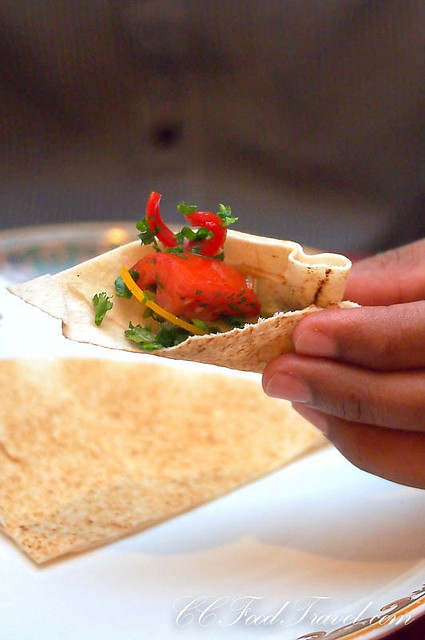 After the first course (yes all that, was only the 1st course!) comes the second course of grilled meats and platters. The Mixed grill was to die for – Shish Tawook, Shish Kebab and Lamb – definitely a carnivore’s playground. The Ouzi lamb platter was my favorite – hunks of lamb on the bone, served on top of bazilla rice, peas, raisins and nuts was just to die for. 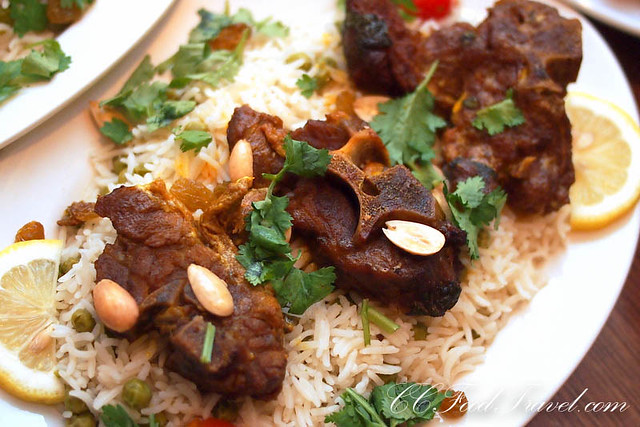 The long grain rice and the sweet raisins added a delicious flavor, whilst the nuts added texture to the dish. Then there was the Kebab Indi – grilled skewered spiced meats and the Shawarma Lamb to finish off the main course. 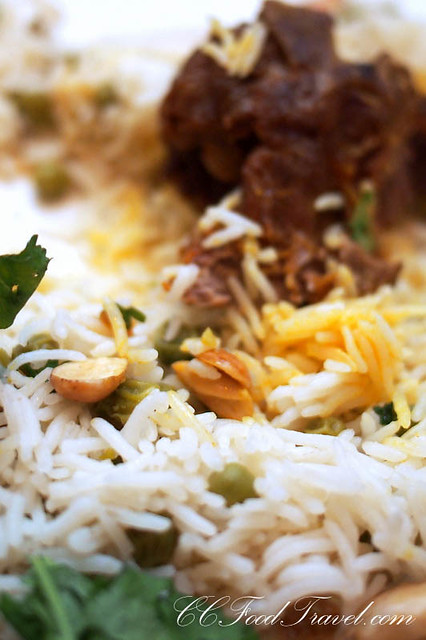 a Syrian speciality is bazilla, rice pilaf made with peas and spices 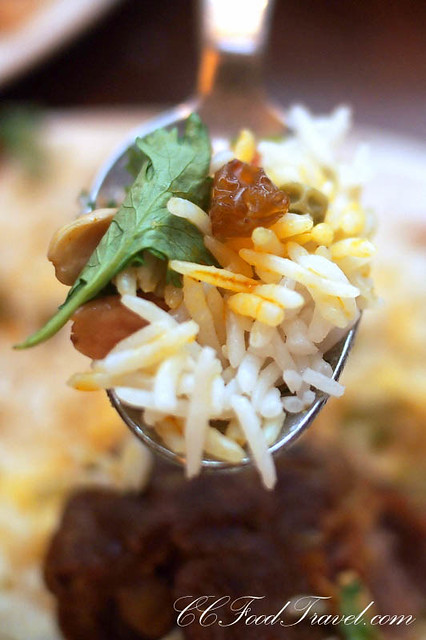 I was addicted to the Bazilla, which had an intoxicating aroma of lamb, raisins, nuts and coriander.. 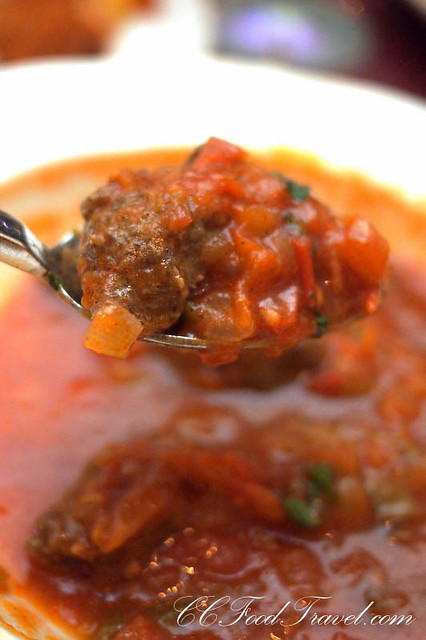 meat balls in tomato gravy – this went great with the long grain rice as well.. I worry I ate too much carbo that night!

The Shawarma lamb was another ridiculously delicious main course. The meat was placed on a vertical spit (yes they brought the spit into The Ritz!), and grilled for as long as a day. Shavings were then cut off the block of meat for serving, and the remainder of the block of meat was kept heated on the rotating spit. 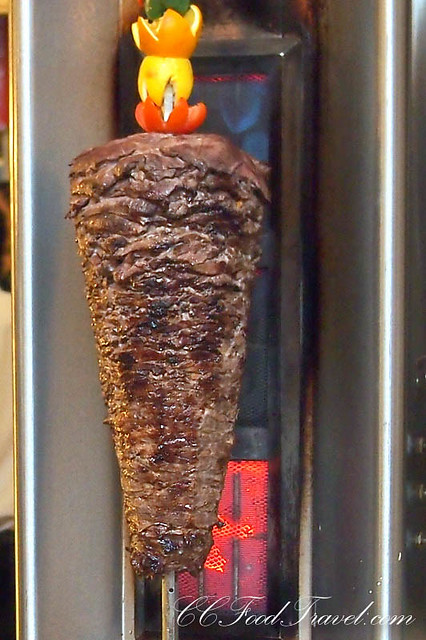 The Shawarma lamb was served between nice toasty pita bread, and served with pickled onions that had been soaked in rose water. I loved eating my Shawarma with tabbouleh, fattoush, taboon bread, tomato, and cucumber. You may also add toppings of tahini, hummus or dilled yogurt to elevate the flavours in each mouthful.

Finally, I must say that after all that blood pumping, hip jiggling excitement, desserts certainly had a soothing effect, especially the Malabi (or Mahalabia) milk custard, which is a kind of melting, Middle Eastern version of panna cotta flavored with orange blossoms and served with pistachio nuts and grated carrots. 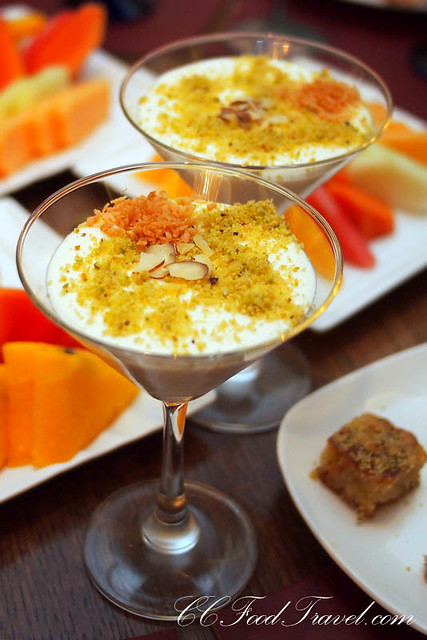 The Basbousa served was super decadent, but what would you expect of a dessert made entirely from a sweet, spongy, semi-soft semolina cake garnished with almonds or coconuts. Ah.. Sugar, semolina, butter ghee, almonds, shredded coconut, shredded pistachios.. the best combo ever, that would pacify the most sweet-toothed among us! 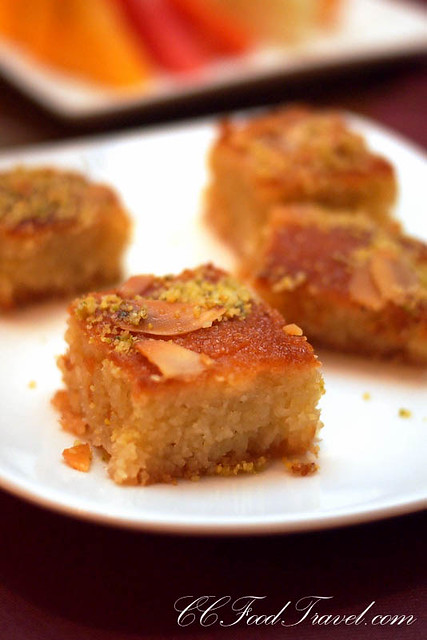 All in all, a terrific night. We highly recommend you check out Arabian Nights at the Ritz Carlton if you can. The best part is that for late birds, dining goes on till midnight. So the kitchen really keeps going till the stroke of twelve. This sensuous dining experience is not to be missed! 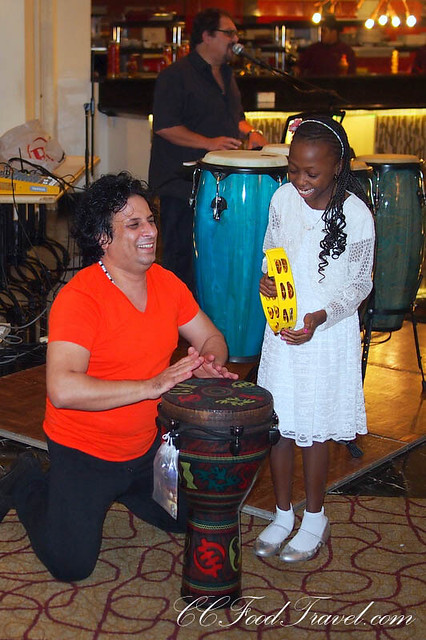 A quick update because we seem to be super swamped, come year end, as always! If you are a fan of fish head noodles,…