You haven’t experienced KL, if you haven’t had breakfast at Imbi Market..

On the weekends, it is a mad rush to wake up and get to Imbi, Kuala Lumpur before 8am.

Most of the good stuff is already sold out before noon, so you best get to Imbi Market early if you’re looking to fill your stomach with some nice hot Malaysian styled hawker breakfast. 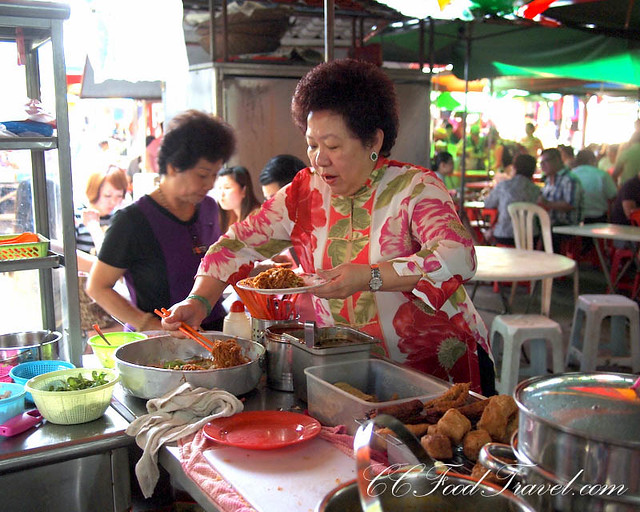 Possibly the only area left in KL with massive, ancient shady trees, that line the streets like sleepy watchmen, the walk to the market in the early morning is always sweet. Ah.. I hope they never cut down these beautiful creatures, whose arms reach high into the heavens, playing hide and seek with the sunlight. I love walking in the big shadow of the might trees on Imbi. There are colonies of clonal trees that have lived for tens of thousands of years, but there’s something majestic about trees that are able to thrive in the smoggy city center. It’s defiance of modernization and the fact that some of them probably even persevered through the fervent development of human industry is remarkable. They are a testament to the long view that Mother Nature takes in tending the Earth. 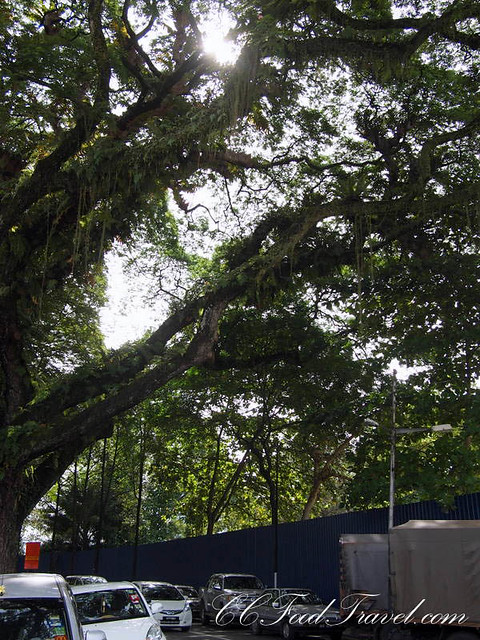 In contrast to the magnificent trees, and located just further up from Bukit Bintang area, Imbi market is somewhat of a sore thumb. Its makeshift awnings, and roof top tents, lend it a rather carnival feel – it seems more like a temporary premises for a market, rather than a real base. Even the folks of Imbi Market will tell you that the market itself was supposed to have been relocated to a permenant premises ages ago. 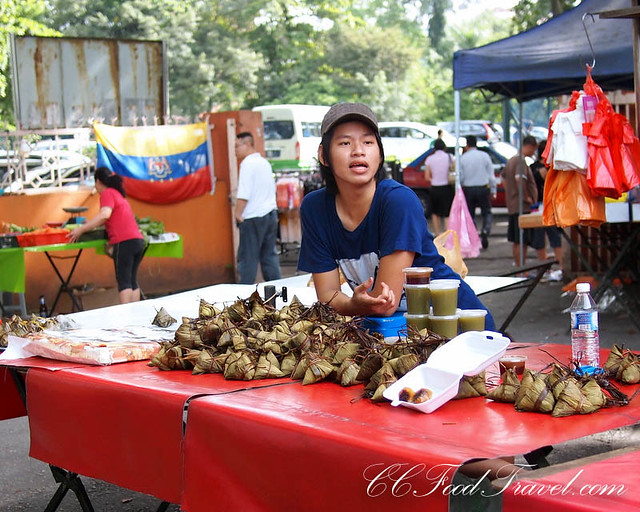 But where, nobody knows. No matter, folks of KL and PJ alike are happy to ask few questions, so long as they know that their hankering for the likes of Malay Nasi Lemak, Hainanese coffee, Crispy Popiah, or Pork Intestine Congee will always be satiated at Imbi Market’s Hawker center. 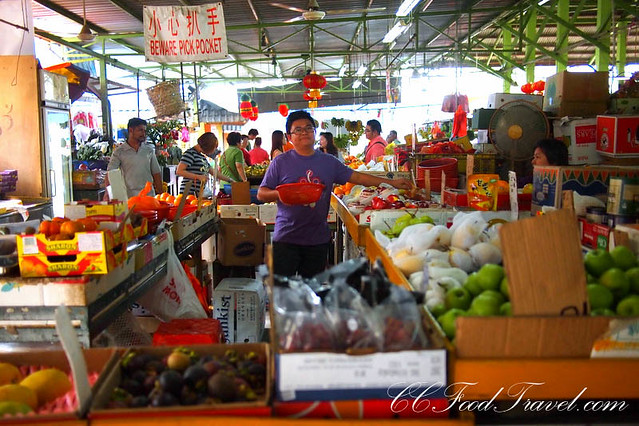 This wet market that’s just next to the hawker center is by no means the largest in KL (check out Pudu wet market) but it has enough of local produce, fruits and freshly butchered meat to keep the early morning market goer happy. Most spices and ingredients can be found at the Imbi market, and in abundance. 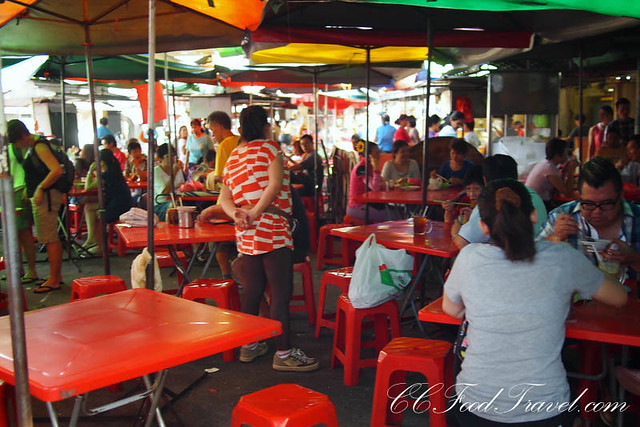 Right.. so with so much going one, where does one start?

Here are 10 Things to Eat for Breakfast, at the Imbi Market KL… 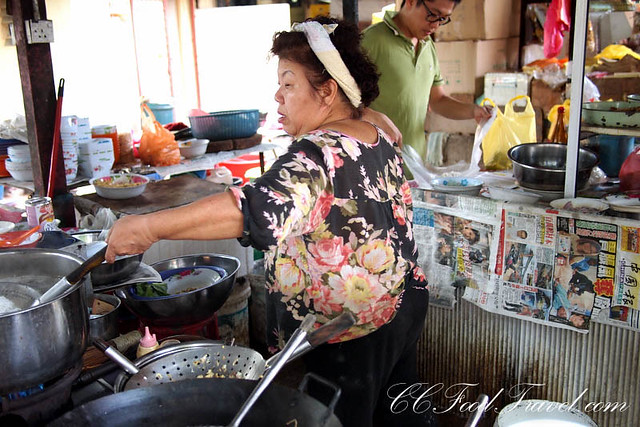 One of my favourites, but slightly too pungent for Cumi, is probably the Ginger and Wine Noodles, in this case, vermicelli (kai chow tong) RM7. 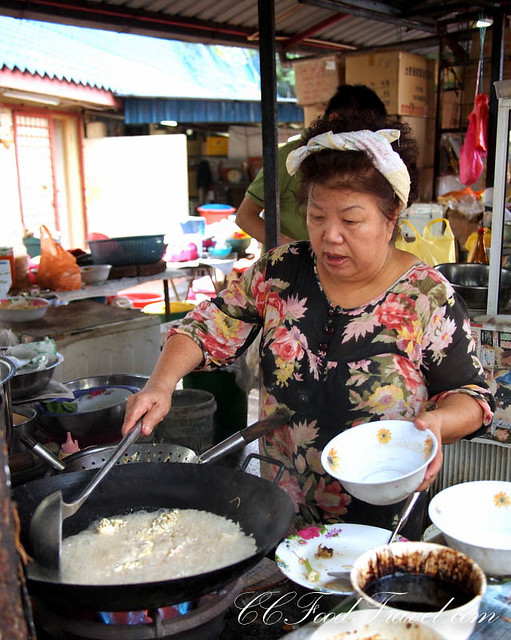 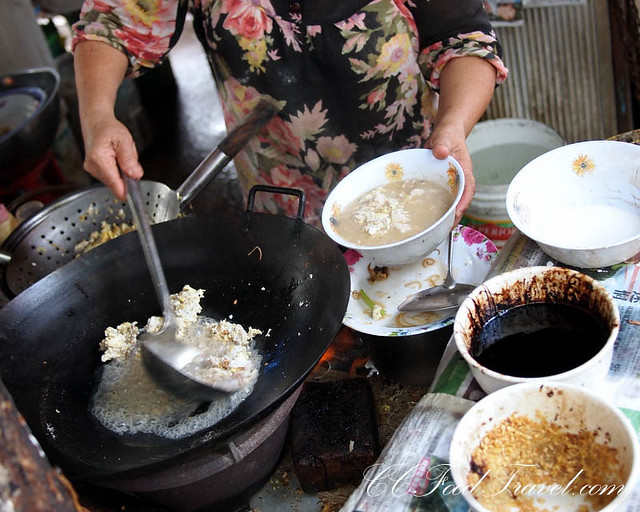 What looked like white blobs of a gritty, pasty material, was actually an egg and ginger concoction. 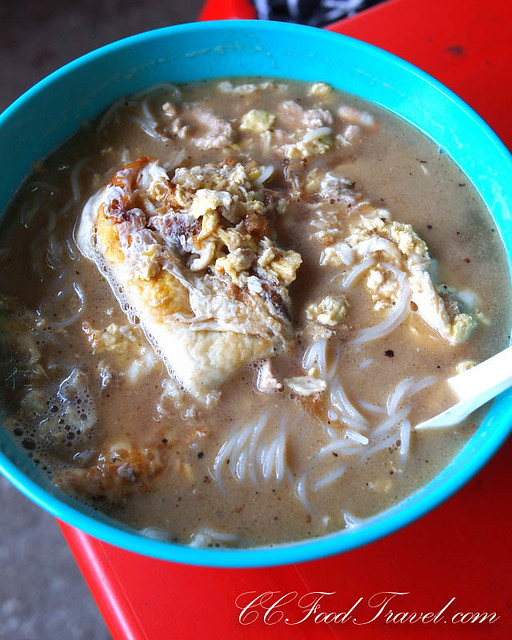 The soups that’s murky and bursting with egg, chicken, prawns, ginger, garlic, shallots, was enough to warm the cockles of your heart, and burn a hole through your stomach ! 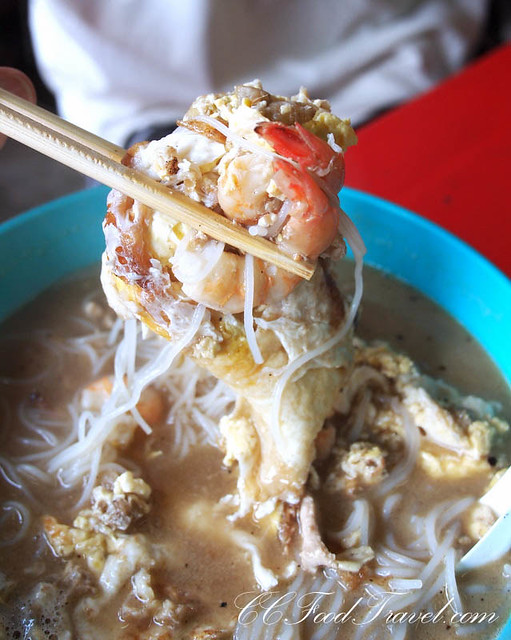 Honestly the ginger chunks in the egg and the chinese rice wine in the soup was so potent I felt like I had just delivered a baby and was paying my dues in confinement. Strong and pungent did not begin to describe this murky liquid in a bowl. Obviously though Cumi ordered this, I ended up finishing it because it was just too full on for him. 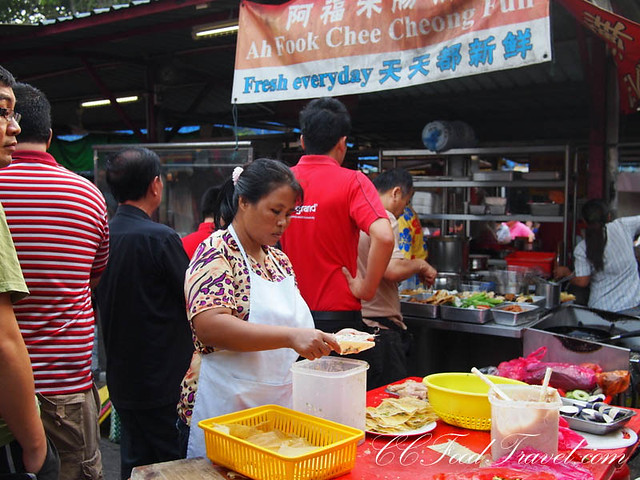 Follow the queue that snakes for ages and you will end up at the Chee Cheong Fun Stall.. so famous because it is Fresh everyday! (as opposed to fresh every other day? :P) 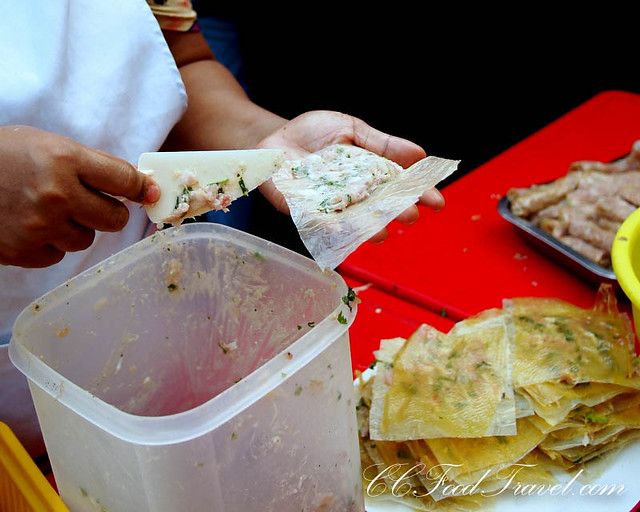 Of all the ingredients in the Yong tau Foo, we like the bean curd the best . It is two layers of bean curd that sandwiches a fish paste with tons of coriander and shrimp in it, which really adds a terrific flavour. 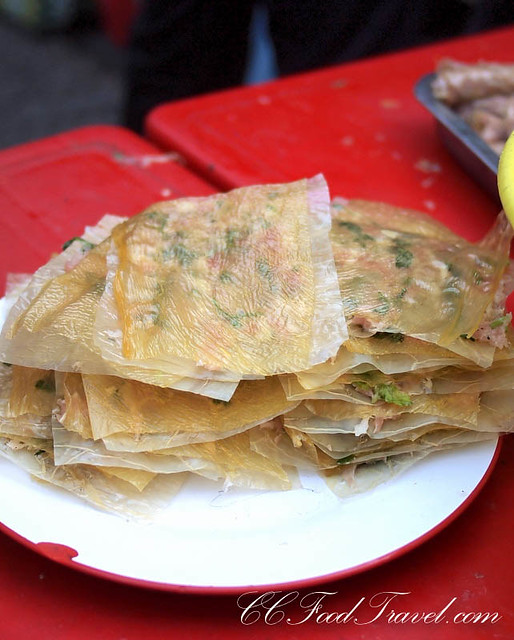 prepped and ready to hit the boiling wok oil! 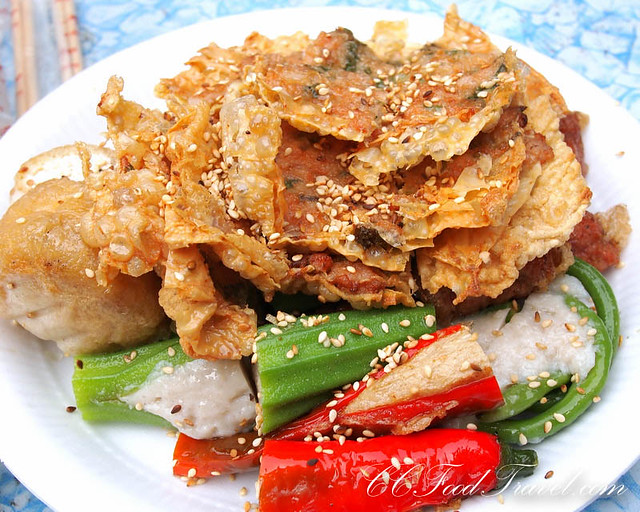 It is then deep fried till the perfect golden brown, and you eat it with sweet sauce and chili sauce but eating it on its own, is just as good. 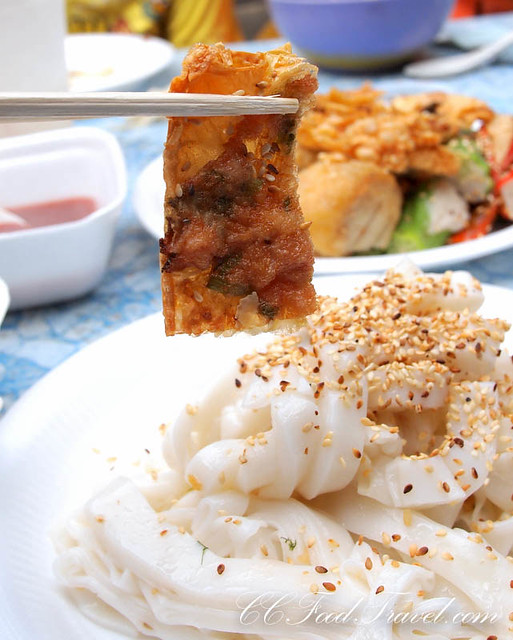 We had this with the chee cheong fun which had an acceptable texture and flavour, but not the best flat rice noodles we have had in town. Here is a better one, on Madras Lane. 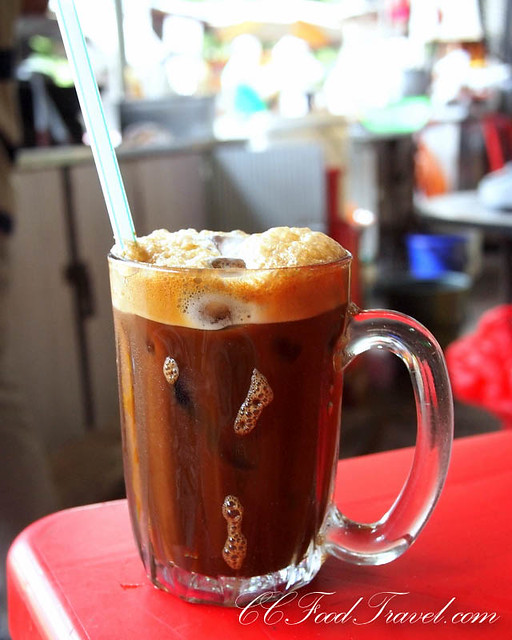 Believe us when we say, that there are also good things to drink here, at Imbi Market, not just eat. Ah.. what can we tell you about the Hainanese coffee.. dark, frothy .. and not very strong at all. It tasted great but don’t expect to get the same kick out of it as your Italian espresso. Sure it colored your teeth just as bad, but it was by no means a caffeine fix. But you know, that indescribable flavour is really rather comforting and reminds me of my hometown north of KL. Still a must have if you are already there, under the umbrella and having breakfast. 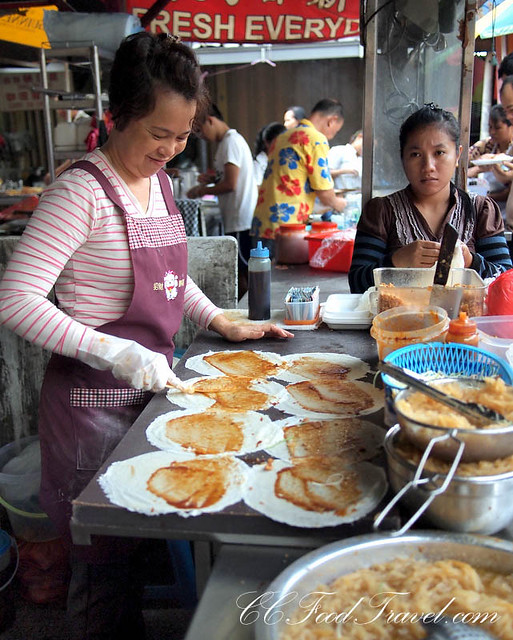 Crispy, tasty and for the perfect popiah, we like ours with tons of chili sauce. A must order if not for the mini explosions of shrimp, sweet sauce or hoisin sauce, spicy chili sauce, lettuce leaves, shredded yambean or jicama, fried bean curd, fried shallot crisps, once your teeth makes it through that chewy popiah skin. Oh bliss! 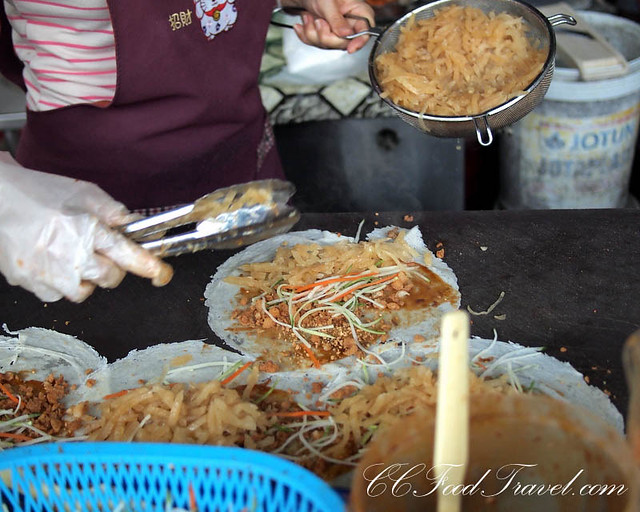 she sure is generous with the ingredients.. 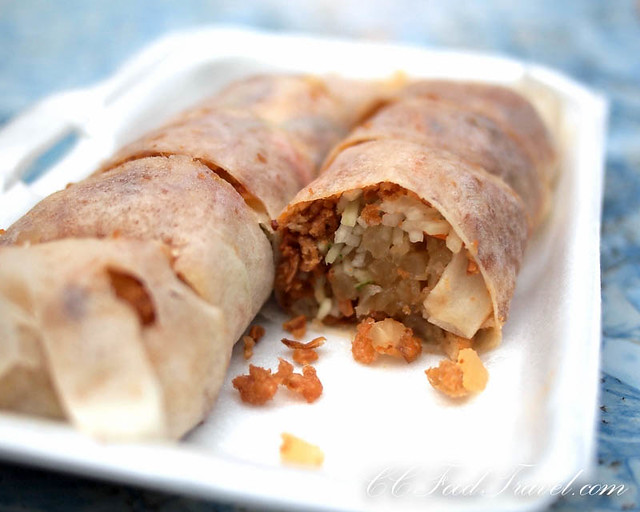 it is called crispy popiah due to the crispy ingredients inside – the special egg- fried till crispy, shallots, ground peanuts, crispy flour bits, and all topped with shredded yambean, cucumber and carrots. 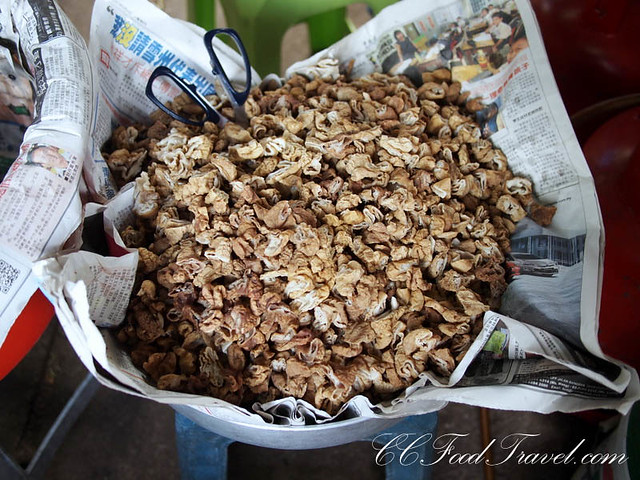 I grew up eating offal in Ipoh, because my grandma said it was good for me, and would make me grow up smart and strong. Now in KL, I eat chee chap chok (pork intestine congee), not only because of its supreme flavor, but also the flood of memories it brings. 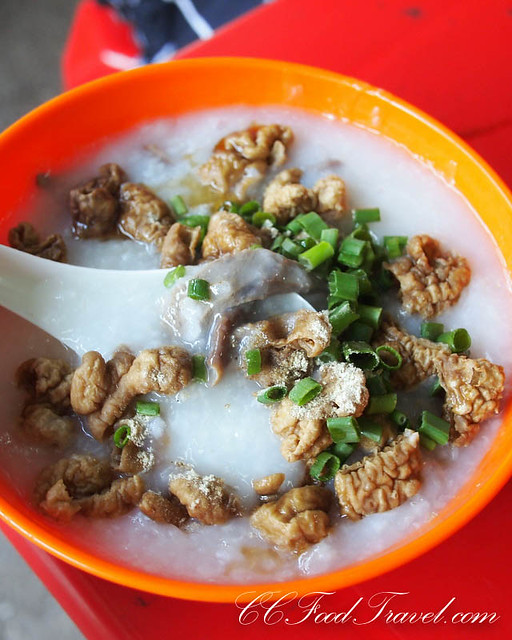 Here at Imbi, do not miss the Pork Intestine Congee. Insanely tasty and blissfully delicious. Another must order. Be sure to get tons of pepper into your bowl of congee! 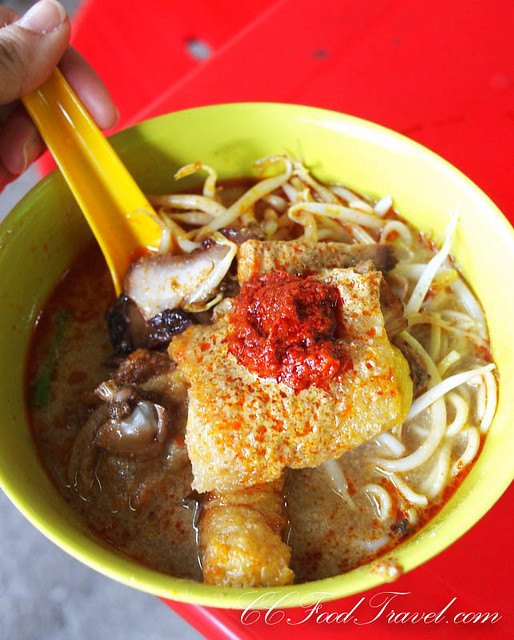 Curry Laksa at Imbi – not the best we have tried but the highlight is the super soft pig skin. Not easy to get soft and fluffy pig skin these days. The curry soup was just so-so as it lacked santan. A better place to eat this would be the late night, Pudu Market Curry mee/wantan mee stall. 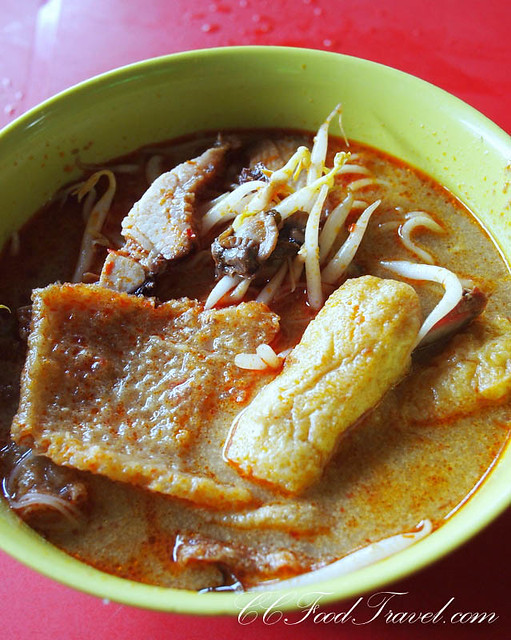 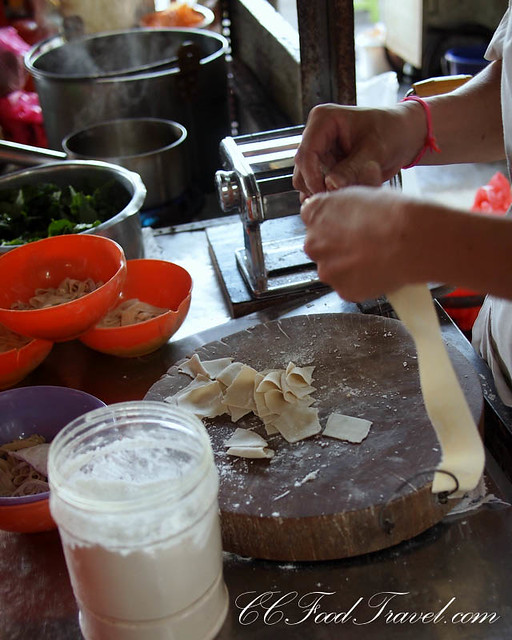 pan mee- a good option for the kids

I like the Pan mee that comes in soup, together with dried anchovies, minced pork, mushrooms, and a leafy vegetable, i.e. the sweet potato leaves or sayur manis. Some like it served dry with a thick black soya sauce (also known as dried pan mee) and some like it in curry broth or chili-based broth, but I like mine in soup. 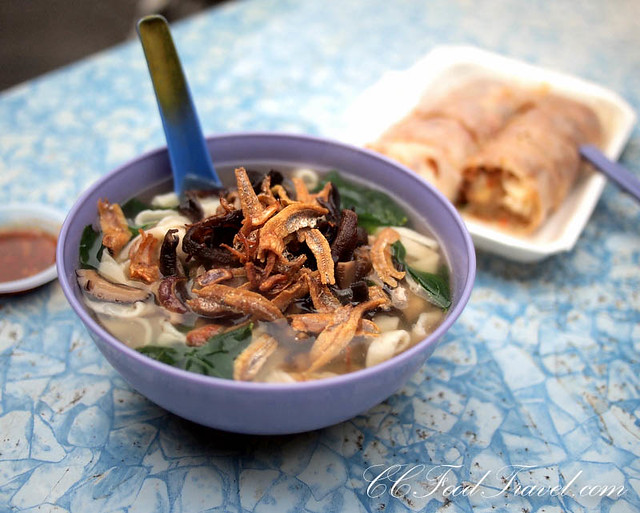 the pan mee at Imbi is generously topped with fresh crispy anchovies and has a sweet, light broth.

Always irresistible is the Char Kwey Teow – shiny with ingredients and steaming with promise.. and loads of aroma of the wok. Greasy and laden with Chee Yau Char (deep fried pork lard), I like mine super spicy. 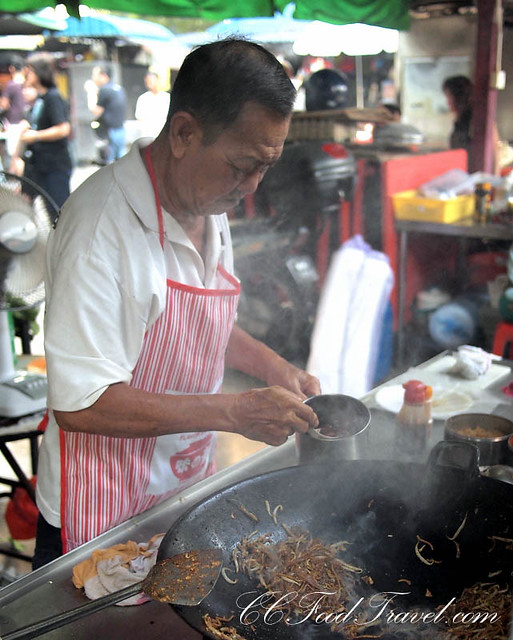 Forget the Pan mee.. make way for the greasy CKT!

Chinese apom – eggy, fluffy and moist at the center, but crispy on the edges.. what’s there not to like? 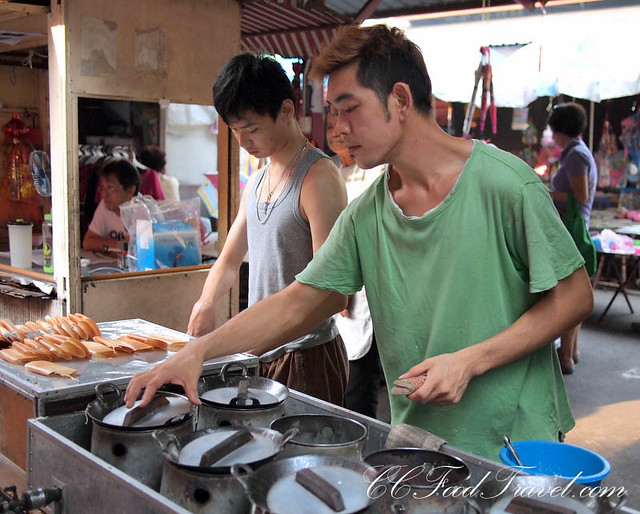 Apom stall – great to take this away for a snack

Finally, something that most Malaysians find irresistible.. egg tarts. These are the mini ones too, so you can eat like half a dozen and not feel it! 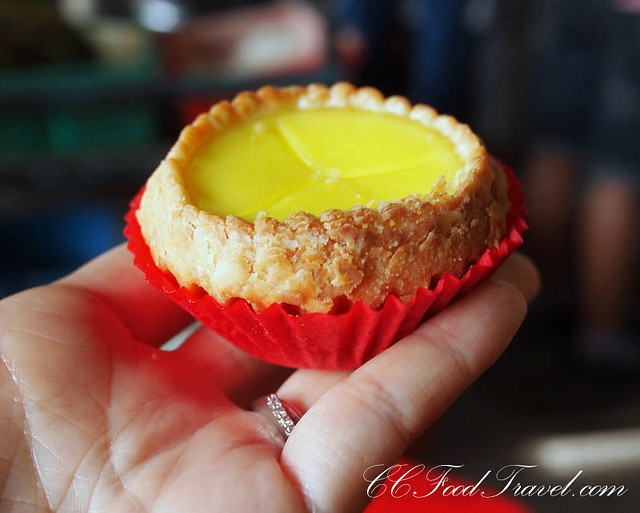 if you are into tarts, as my hubby is, don’t forget to try these flaky ones 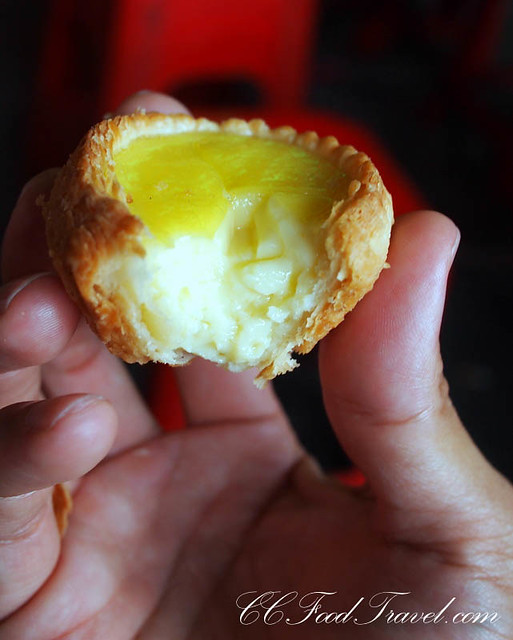 Egg Tarts from this bakery next to Ah Weng Kor.. soft, eggy and fluffy in the center, with a nice flaky, buttery pastry. Just gorgeous!

Well, that concludes our list of 10. There was also other delectables such as Wantan Mee, Hainanese Assam Laksa etc etc.. but we only had time for this.. but don’t worry, many more weekends will be spent here at the Imbi Market, for sure!

For just two short weeks (which already began on Tuesday), César’s at The Ritz-Carlton, Kuala Lumpur will be hosting a food promotion themed Arabian…