We had to get this post out real fast, because, a rather cool and accomplished chef, is visiting Mezze Bistro KL, for just this week. That’s right folks – all good things should and must be shared, and so, from the March 11th till 16th, you need to head on down to Mezze, to experience the whimsical but precise cooking style of top Chef, Baptiste Fournier. 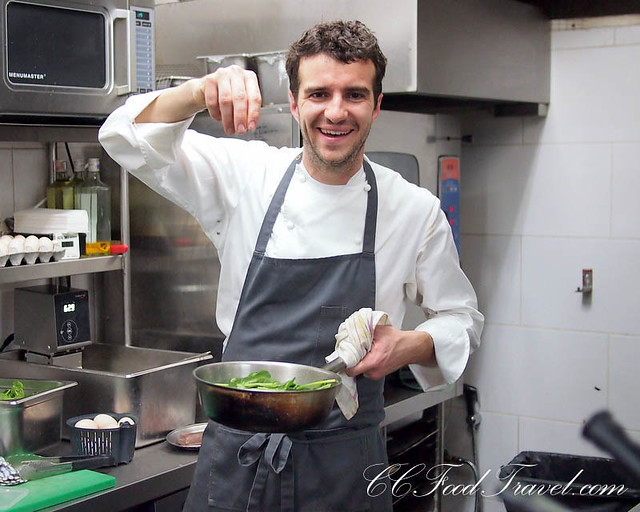 In collaboration with Mezze’s resident head chef, Yves Pierre Renou, they will present a week of cuisine’s that’s honest, fresh and surprising. Fournier is currently helming the La Tour, a one-star Michelin restaurant in the beautiful village of Sancerre in the Loire Valley, France and this is in fact, Fournier’s 2nd visit to Mezze Bistro. 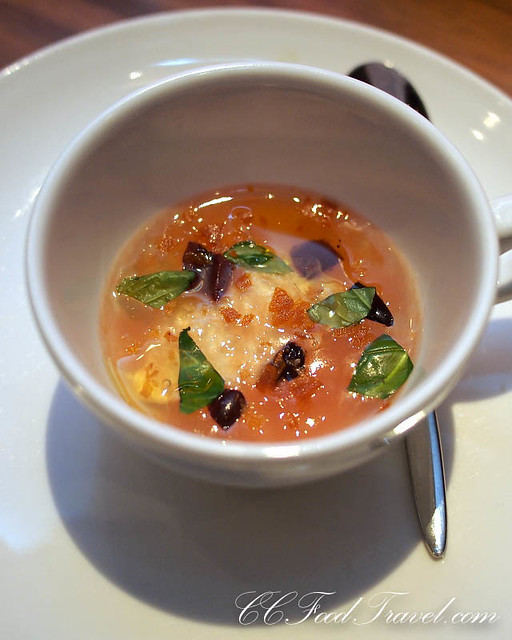 Voted as one of the top 6 young chefs in France by the famed Gault Millau guide, Baptiste took over the helm of the executive chef role from his father, Daniel at the family-owned La Tour at a young age of 29. Baptiste trained under the watchful eyes of famed chefs such as Alain Passard, from three-star Michelin restaurant, L’Arpege and Guy Savoy, another three-star Michelin Chef of his namesake restaurant. Baptiste has taken the food scene in Sancerre by storm with his cutting edge style and use of fresh ingredients. 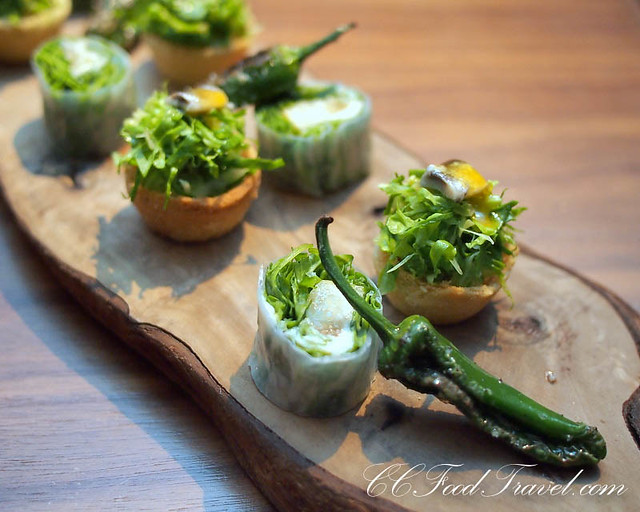 Without a doubt, strong connections with L’Arpege are apparent in his food. For those who missed him the last round – Chef Baptiste is already in town, and did his first night’s debut on Monday. You still have 4 more days to make a reservation and check out his menu as he will be in town till Saturday. 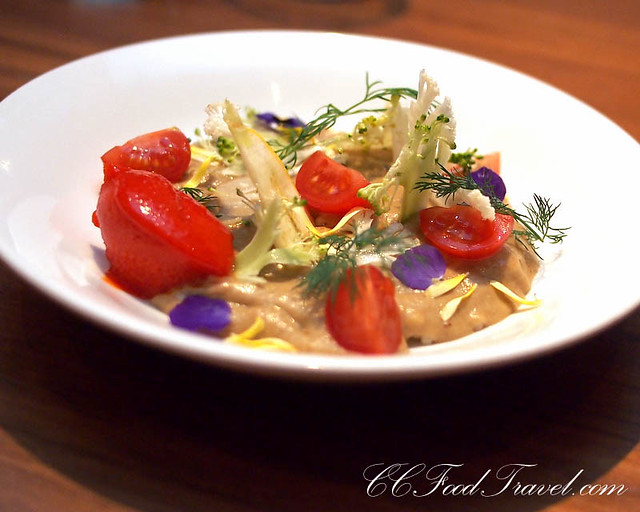 We were told that the contemporary menu would change during the week, so it would be exciting to see what different dishes the chef decides to create for his guests each night. 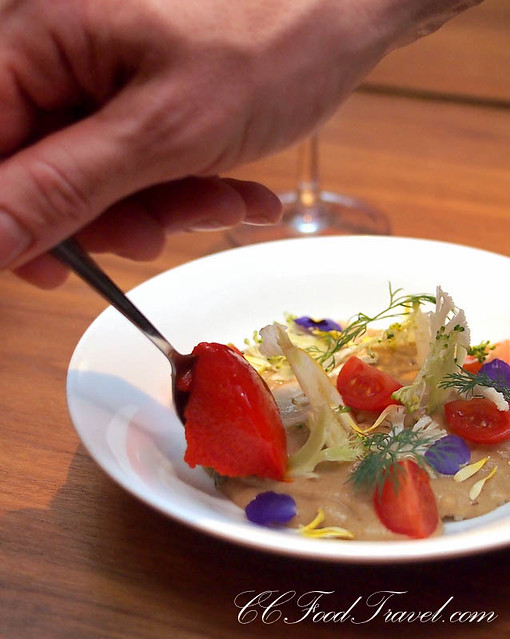 Chef Baptiste emerges from the kitchen and adds a dollop of the pepper sorbet to our beautiful vegetable garden!

You could tell that this chef takes great pride in his plating and exquisite creations. All the dishes were wonderfully presented and exhibited great balance in terms of aesthetics as well as taste. Everything merged harmoniously to present itself as a perfect mouthful. 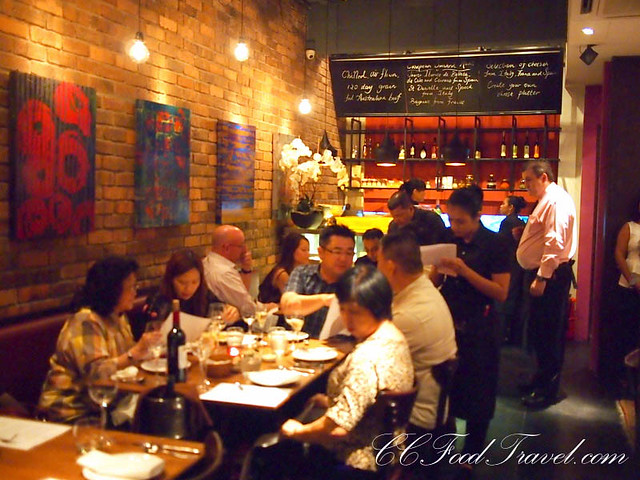 Mezze, packed to the rafters with diners, eager to get a taste of the Chef’s fine cooking.. 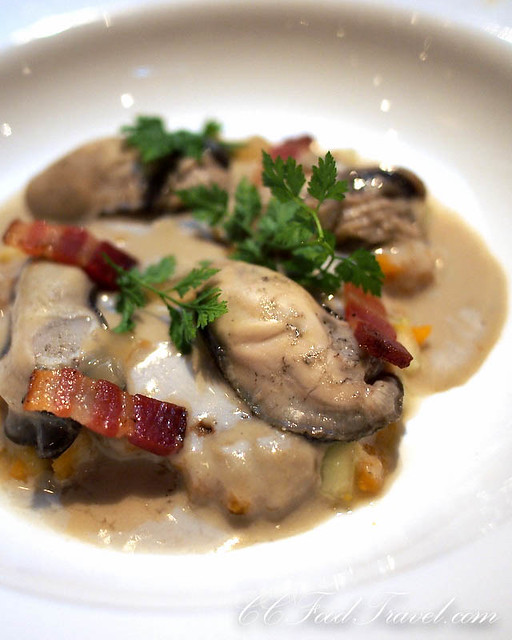 This gorgeous, succulent starter of lightly cooked oysters had a nice contrast of textures when paired with the crispy fried bacon. The Spanish Jerez vinegar really enhanced thy flavours of the oyster. 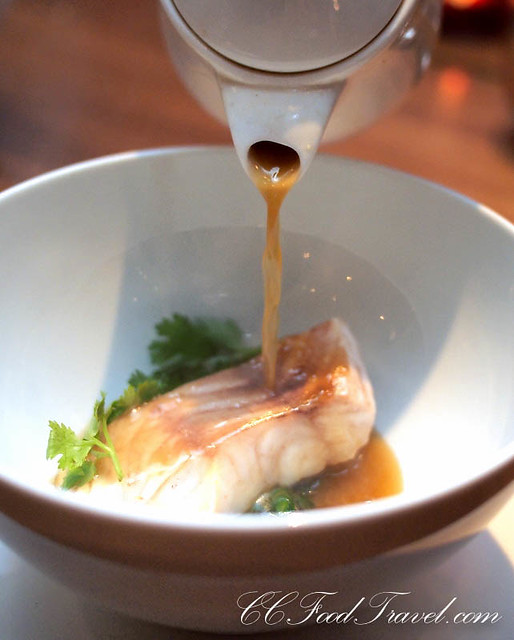 For the mains we had a poached red snapper in chicken broth, spinach and lemon, that paired well with the Muscadet Sevre & Maine/Lie APC Blanc 2010. This dish was one of the chef’s favourite dishes and we could see why. It had just a touch of international flavours, that’s representative of Baptiste, that’s what he told us. There was also a fun play on the sense of smell – where you could smell coconut in the dish, but not taste it. He loves to prepare this dish, and actually misses it when he gives it a break on the menu. 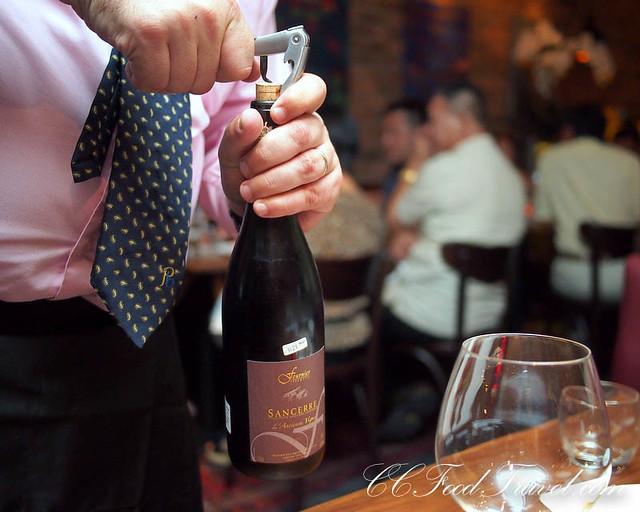 Our next mains would be the lamb, and the sommelier recommended that we pair this with the Fournier Sancerre L’Ancienne Vigne AOC Rouge which was a medium bodied wine. 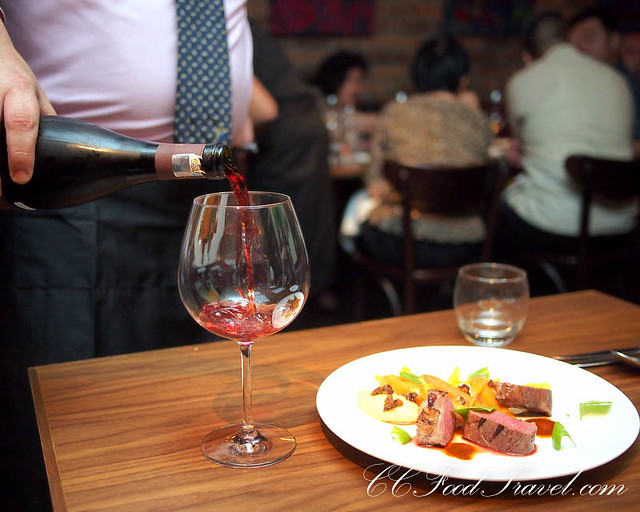 This wine was slightly tannic, had a nice easy finish, and paired well with the lamb 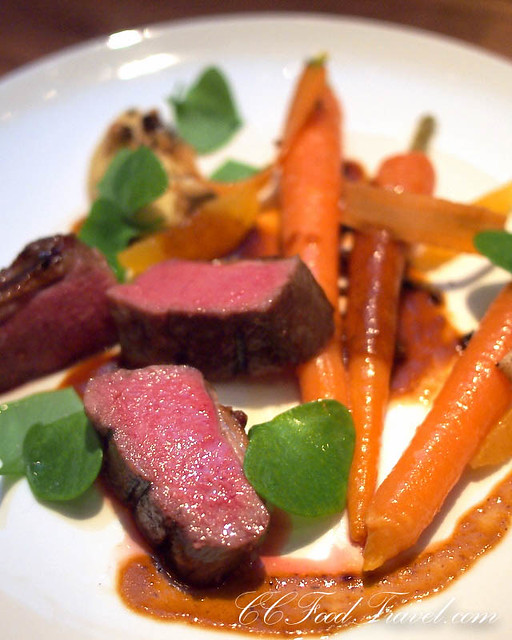 The perfectly cooked, medium rare lamb – moist and not in the least bit gamy. The flesh was exquisite. 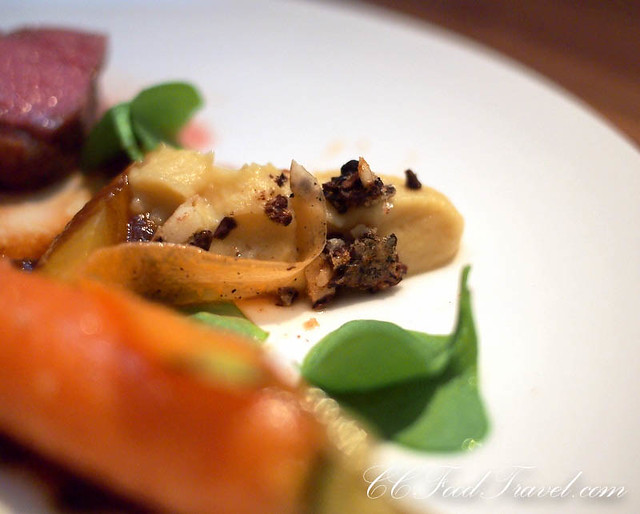 The cacao seeds were remarkably effective in conferring some textural contrast to the soft vegetables. They were toasted till they were warm and crisp, and biting into them caused the flavours of chocolate to emerge. An awesome dish indeed! 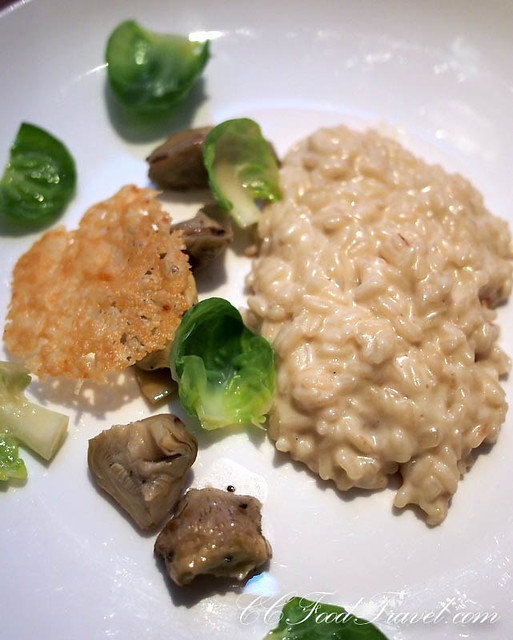 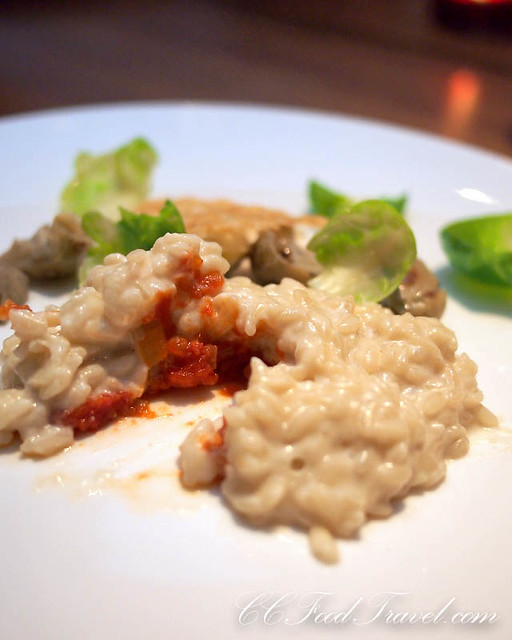 incase you were wondering if the chef forgot the confit of tomato, it was hidden under the risotto! 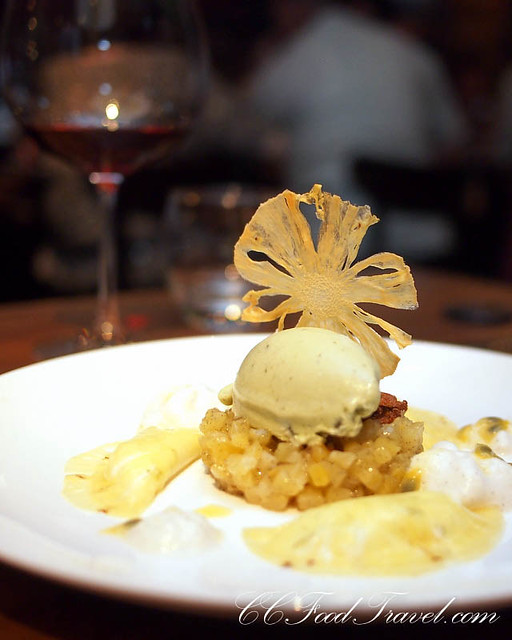 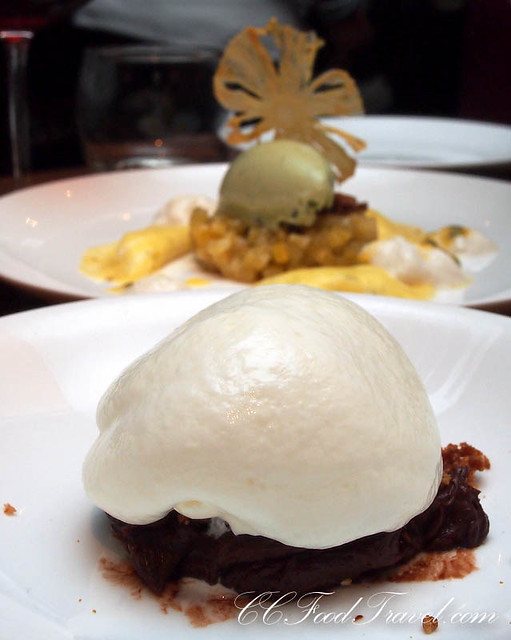 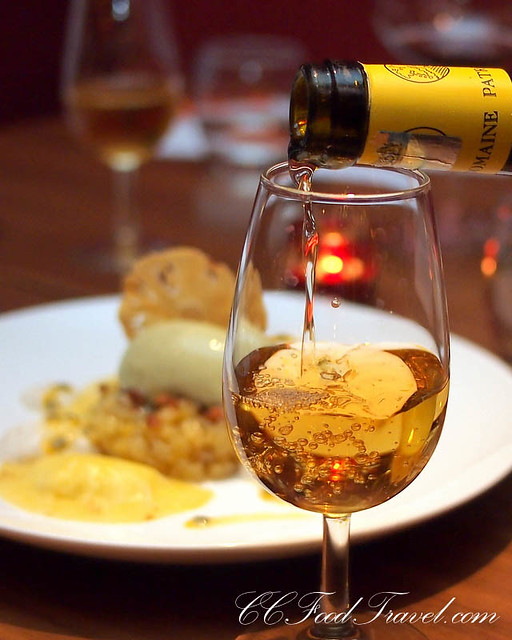 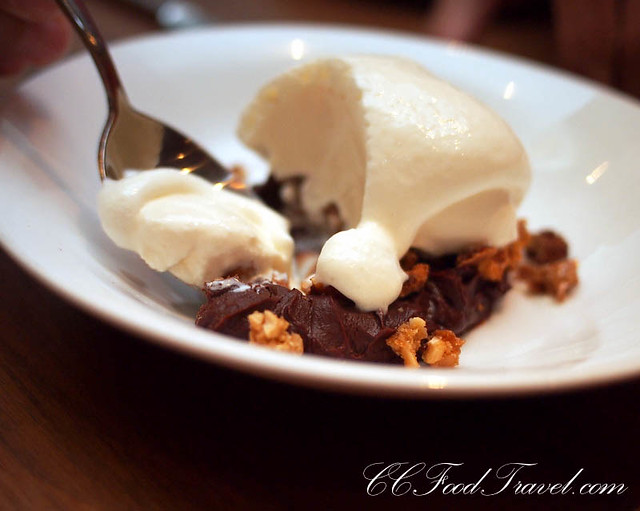 The chocolate cream and crumble was really the highlight for me. Adding a soft and billowy cream to the crumbly chocolate was just a marriage made in heaven. Too good for words! 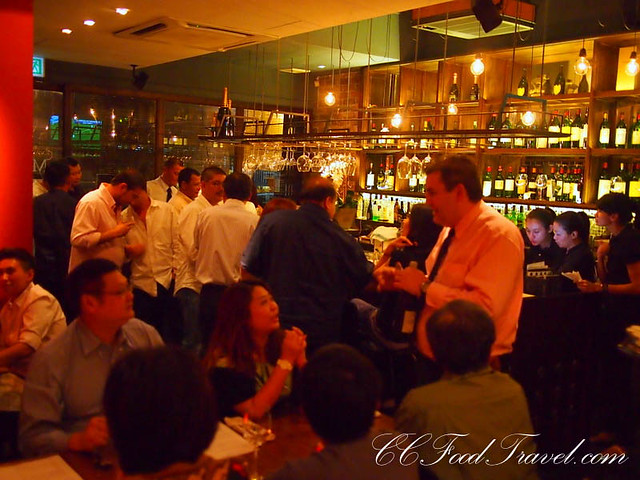 That’s right folks, you still have 4 days to catch Chef Baptiste Fournier at Mezze. Every night is nearly almost packed, so you best be quick about your reservations!

Head on over to our FB page for more foodporn!

One of the more memorable lunches for us was the Hennessy Paradis Imperial, food paired lunches at DC restaurant, which happened last month. Hennessy…