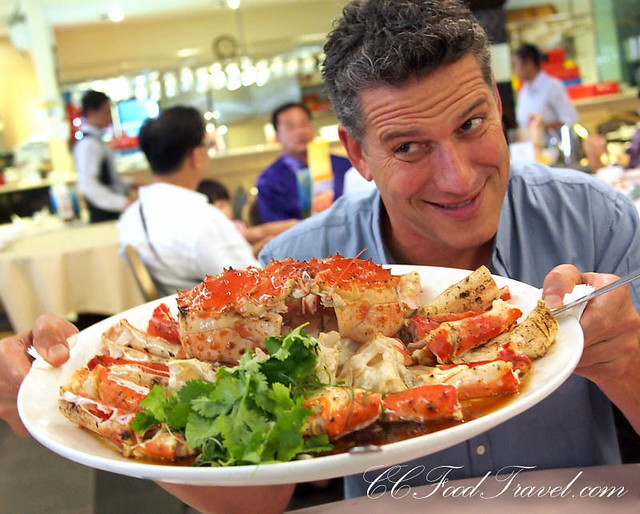 Bob has spent a lifetime cooking and exploring the outer limits of the food world, but there are still a few surprises out there, even for him. In World’s Weirdest Restuarants, host Bob Blumer takes a wild ride around the globe to find the wackiest, craziest and downright strangest places to grab a bite. 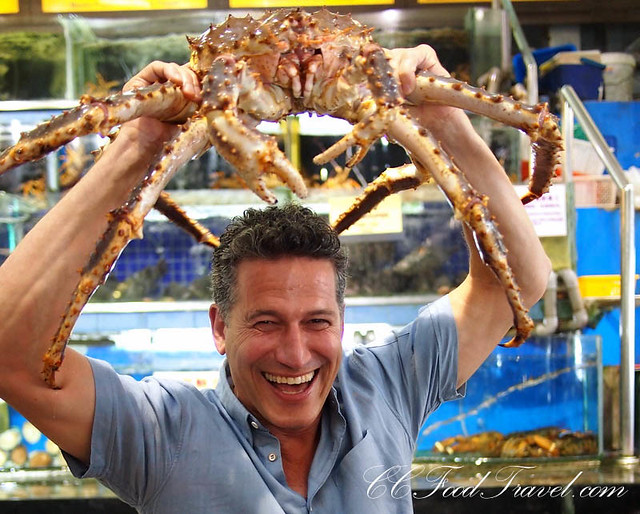 From monkeys that serve beer in a Japanese tavern to dining naked in New York and even eating curry out of mini toilet bowl in Taiwan, Bob seeks out the most eccentric and extreme dining experiences available. If you are a fan of Bob’s, you will really dig his voyage of discovery that takes him into a host of ‘believe-it-or-not’ dining subcultures and food adventures where the human imagination is the only limit. World’s Weirdest Restuarants premieres every Monday at 9:00 p.m., beginning January 7th, 2013. 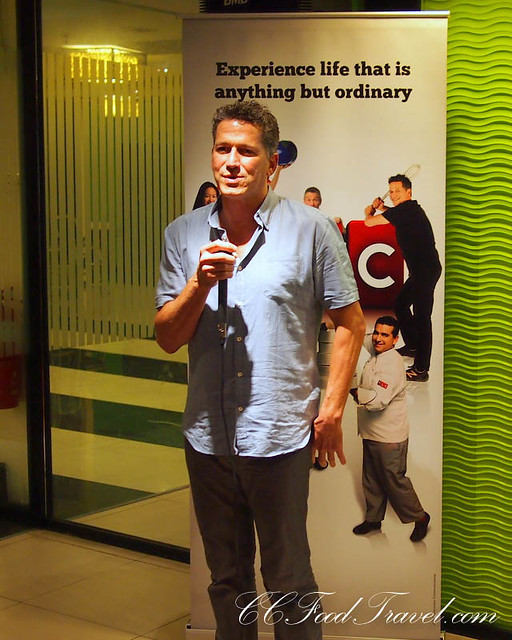 This show is a 13-part global extravaganza that features 52 off-the-wall eateries packed with crazy characters and extreme cuisine across U.S., Canada, Japan, Taiwan, Germany, Amsterdam, Czech Republic, England and many places in between – all served up with a side order of “weird”. Each colorful episode showcases four of the planet’s most eccentric and eclectic restaurants that’ll leave you begging for seconds. Best known for his surreal gourmet creations, Bob hops over to the other side of the table and peels back the multi-layers that go into creating an extraordinary odd dining environment, where food takes a back- seat to the strangeness of it all. 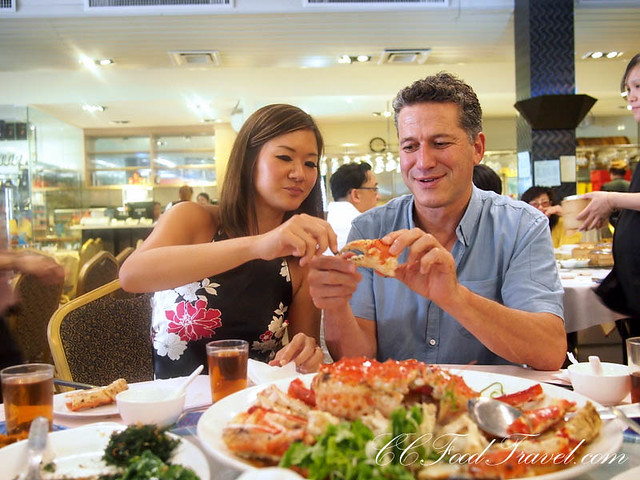 Bob says he wants to show me how to eat the Alaskan Crab.. 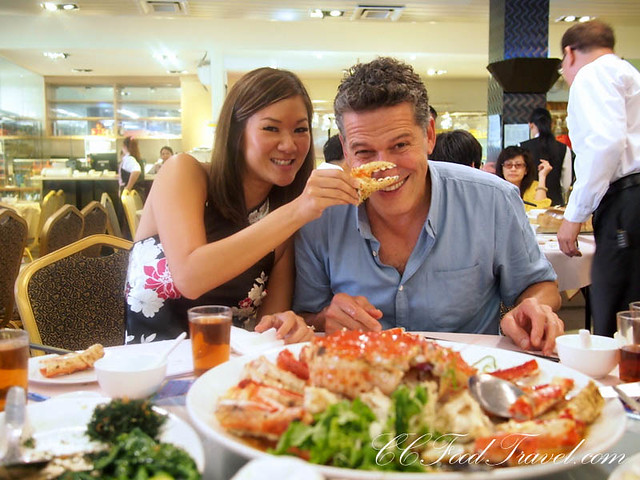 Little did I know, that he preferred to just play with his food!

Here’s a sneak preview of what will come..

Culinary Speed Dating
This episode takes you to Florida to “Clark’s Fish Camp”, a former bait and tackle shop, now a full service restaurant, that serves wild and exotic meat and offers customers the chance to feed the resident alligator. Then it is off to Vancouver to “No Fixed Address” for culinary speed
dating, where food and romance are blended together. Then head to the “Cos Cho Maid Cafe” in Japan to be spoon-fed by “maids” who dish up fun and games foodie-style. And end up in Milwaukee at “Safe House” a restaurant for double agents, counter intelligence and all manner of espionage.

Dinner Ninja Style
In this episode, you will see “Ninja New York”, where at any moment a loud Ninja-waiter might pop out of nowhere to scare the living daylights out of you, while serving up high-end Asian Fusion cuisine. Then we head to “XXXL” in Germany where you’ll need to bring a big appetite, because their schnitzel and burgers are of epic proportions. In Taipei, we take off at “Sky Kitchen”—a replica of the A830 airplane, and if you’re lucky, you might even get bumped up to First Class. Then we end up at “The Waffle Shop” in Pittsburgh for fresh fruit waffles, where
customers are invited to be a guest on their ongoing live Talk Show. It could just be your 15 minutes of fame.

Down For The Count
In this episode, Bob takes you to “Dark Dining” in New York City for an upscale meal you’ll eat blindfolded. Then we’ll travel to Asia, for traditional Thai cuisine, where the tables surround a regulation-sized boxing ring. In San Francisco, we check out “The Brainwash Café,” where you can do your laundry, watch a comedy show and eat the best flat-iron chicken sandwich on the coast. Later, we jet back to Japan, for homemade curry that’s cooked up by a conductor and delivered to your table on a miniature train. 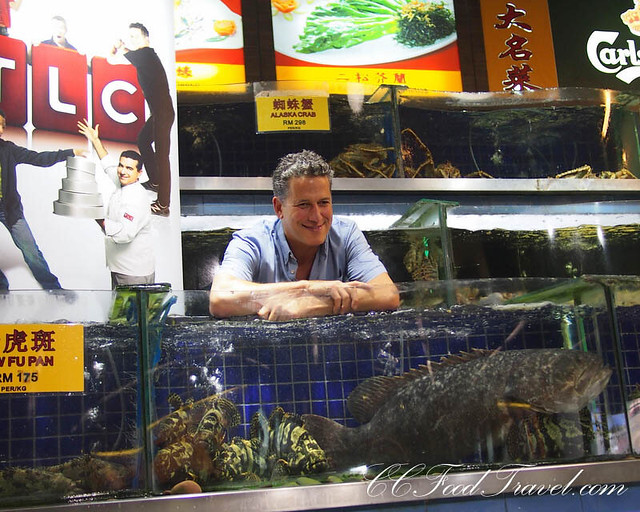 Escape From Alcatraz
This episode takes you to San Francisco to the famous “Tonga Room,” for an old-fashioned Polynesian Luau, complete with a roasted pig, limbo dancing and an indoor hurricane. Then we’re in Tokyo at the “Calico Cat Café,” which houses 53 resident cats. Customers who don’t
own their own pets can have a snack while spending quality time with the cats—and we’ll stop in at the “Deco’s Dog Café”, where locals bring their prized pooches out to join them in some fine dining. We’ll swing down to Southern Florida to “Tundra” where you can chill out with all
things icy—from cocktails served in shot glasses made of ice, to tuna tartar presented on ice plates smoking with dry ice. In Japan, we’re going to prison at “Alcatraz ER”—there’s no escape from the mad-scientist themed, Japanese cuisine, served up to you inside a cell, by men in white coats.

Going To The Dogs
This episode takes you to a “Modern Toilet” in Taipei where you’ll be served curry in a tabletop porcelain toilet. Then we’re off to “Voodoo Donuts” in Portland to sample divinely decadent donuts and witness a wild wedding. We jet to Germany where you can order classic Bavarian
cuisine delivered straight to your table on a unique rail system that merges modern technology with good old fashioned gravity. Later we head back to the Pacific Northwest, to the “Dining Dog Café,” where dogs slip into formal wear and dine on a four course gourmet meal.

Gone Fishing
This episode takes you to a restaurant in Japan, where you’ll have to reel in your own dinner. Then we’re off to Colorado to an off-the-wall Mexican hacienda with a secret tunnel, roaming gorilla and Acapulco-style divers, who leap from atop a 20-foot tall waterfall inside the
restaurant. Next, we’re in Tokyo at “Criston Café”, which caters to the local Goth crowd, serving signature dishes, like “Vampire Rolls” and a “Tower of Babel Salad”. We’ll finish in New York City at “Lucky Cheng’s” to sample some Asian fusion cuisine served by vivacious, sequined
drag queens.

Miraculous Mermaids
This episode takes you to Florida, to eat fresh seafood and watch miraculous mermaids doing underwater acrobatics, at the infamous “Wreck’s Bar,” a “sunken” ship, once frequented by Elvis Presley, Marilyn Monroe, and Joe DiMaggio. Then we’re going really weird at “Kagaya”
in Japan, a one-man show that will leave you out of breath with laughter, over delicious down- home Japanese cooking. In Tokyo, you’ll be pampered at the “Butler Café,” where tuxedo clad-servers will fulfill your every desire. We’ll end up in the Big Apple at a clothing optional
restaurant, where we will bare it all.

Monkeying Around
This episode takes you to the USA for down-home burgers and ribs at “Dick’s Last Resort”, where people pay to be abused by the rudest waiters around. Then we’re off to Italy to a restaurant built in a barn. You’d better stay on your toes—the servers will toss your plate
from across the room, scoop bacon and mushroom risotto from the back of a tractor with a handyman’s trowel and you might get a tableside visit by the resident donkey. We go off our diets at the “Heart Attack Grill” to gorge on four-pound bacon- cheeseburgers, all-you-can-eat fries and high-fat, chocolate milkshakes. And finally, we journey to a Japanese tavern for fresh sashimi, fried chicken and beer that is brought to your table by a trained monkey.

Operatic Eats
This episode takes you to London’s Theatre district, to “Sarastro”, for a crazy, kooky take on the art of opera, served up with terrific Turkish cuisine. Then we’re stopping in Taipei, for traditional Taiwanese food that’s so good, the resident “nurses” will keep checking your blood pressure and prescribing your next drink. In Vancouver, we’ll fall down the rabbit hole, into Wonderland, for fabulously fine food—but watch out—you can never be sure if it will make you shrink or make you grow. We’ll end up in Brooklyn, at a rockin’ bowling alley, that serves striking fried chicken and where the portions are anything but spare.

Prehistorical Royal Dining
This episode takes you to “Giligin’s” in Arizona where little people serve big portions of anything deep-fried and delicious. Then we’re off to Taipei where classic Taiwanese cuisine is served up with traditional fire-breathing puppets. In the Czech Republic’s “Pravek” we’ll eat meat, meat
and more meat, brought to the table by a caveman in a prehistoric cave dwelling. We’ll end up in England at “The Puddding Club” where you don’t have to finish your dinner in order to have dessert—in fact there’s no main course at all—just seven glorious courses of celebrated British
puddings.

Singing Your Supper
This episode takes you to Berlin, where we’ll be served roasted suckling pig while being entertained by a court jester and knighted by a Knight in Shining Armour. Then we’re off to “Supperclub” in San Francisco, to eat a four-star interpretation of pork belly and fish ‘n chips,
while being amused and mesmerized by a wily troop of performance artists. We’ll jet to Japan’s “Arabian Rock” for Middle Eastern food, genies and belly dancers. And end up at “Bom-Bane’s” in Brighton Beach, England, where a local, mechanical hat-wearing, eccentric musician sings
your supper to you.

This episode takes you to Taiwan to “Carton King” where everything is made from recycled cardboard—the tables, chairs, soup bowls—everything. Then we’re off to Amsterdam to “Kinderkookkafe”, a café where the chefs and servers are children who learn the art of cooking
in a kid-friendly kitchen. We’re in Taipei for tantalizing Taiwanese food in a sculptural 5-storey restaurant that feels like you’ve journeyed into the mind of the artist who created it. We end up in Manchester, England for a dinner in the haunted mansion known as the “Hellfire Club” for
some scary dishes like “Satan’s Crown Jewels,” “The All Seeing Eye,” and “Stake Through the Heart”.

Through The Looking Glass
This episode takes you to San Francisco to “Straw”, a carnival-themed restaurant, where you can play some of your favorite midway games while chowing down on donut-covered burgers and cotton candy. In the Czech Republic, we’ll sample the local beer while bathing in it. In Tokyo, we’ll fall down the rabbit hole into an “Alice in Wonderland” restaurant, to eat Cheshire Cat risotto, Queen of Hearts pizza and “off-with-her-head” desert. We’ll end up in Amsterdam at “Pallazzo” under a big top, where fine dining meets a Cirque de Soleil-style comedic tour de force. 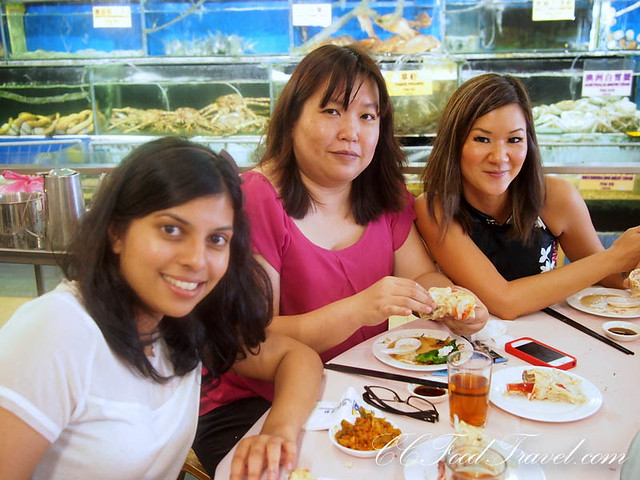 A thoroughly satisfying lunch.. we’re glad we got to meet Bob in person.. a crazy, fun loving guy! Thanks TLC for organizing it

Thanks for the whacky FB love!

Well well.. we might actually have like 2 minutes of fame, on AFC channel come this December 2013! You see, the Asian Food Channel,…