Sharone Hakman is such a dish. And he really knows how to cook one too!

This Chef from LA is the self taught chef who was placed fifth in the first season of reality TV series MasterChef US, and he has been touring Malaysia (KL specifically) giving cooking demonstration to his ardent fans, including Mid Valley Megamall, and a couple of weeks back, at BIG (Ben’s Independent Grocers), Publika. 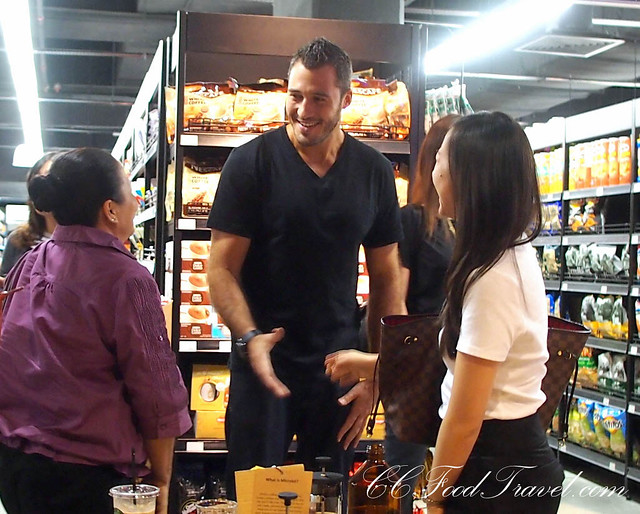 Sharone who comes across as unpretentious, laid back, and really fun to talk to, shared his cooking tips with us, at BIG Publika, which incidentally coincided with the Sunday premiere of the third season of MasterChef US on Astro’s Star World channel 711. Sharone was like a spiritual leader, leading his disciples, as he walked us through the BIG isle’s, picking up groceries as he went along, in preparation for what he was about to cook for us. Apparently the idea was for Sharone to interact with the food, we with him, so that we could get to know him a little better. We also asked him tons of pressing questions such as.. have you ever been to a wet market? Did the smell kill you? Have you ever been an underwear model.. those sort of important questions;) 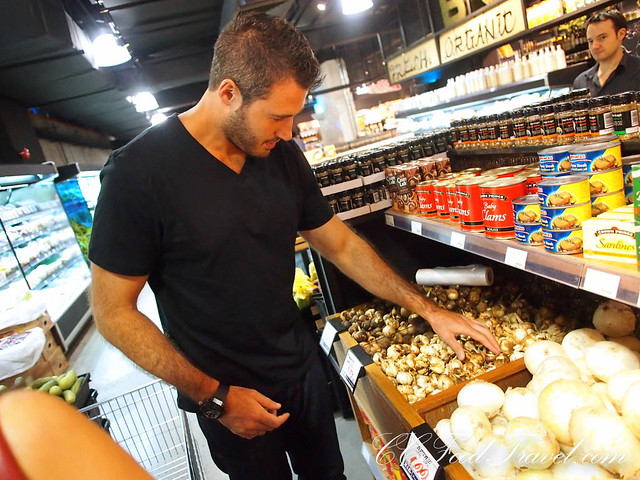 Sharone is very hands on.. he likes to touch everything.. 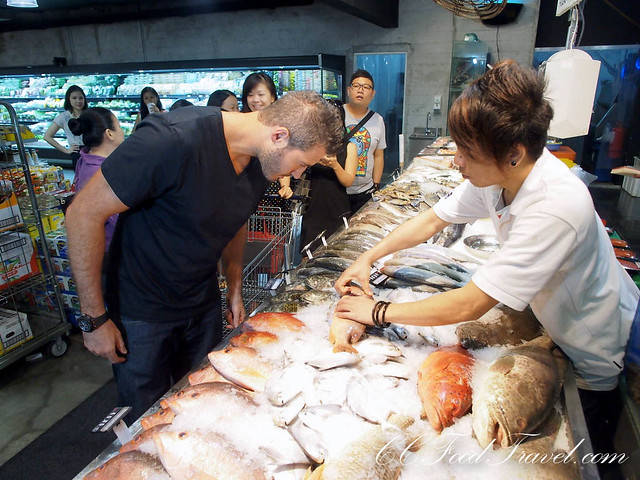 Formerly a financial planner, Sharone left the corporate world to follow his true love for food by pursuing a career as a chef. His standout performance on Fox’s hit show Master Chef was what put him on the map.. Now, a highly acclaimed chef, owner of a barbecue sauce company, dedicated family man and active lifestyle enthusiast, Sharone puts as much love into his food as he does into his zest for life. His celebrity clientele and international television success has not not changed him one bit – he’s just a guy who cooks with passion and let’s his creativity shine through his cooking. Of course it helps that he looks like a GQ model allright! 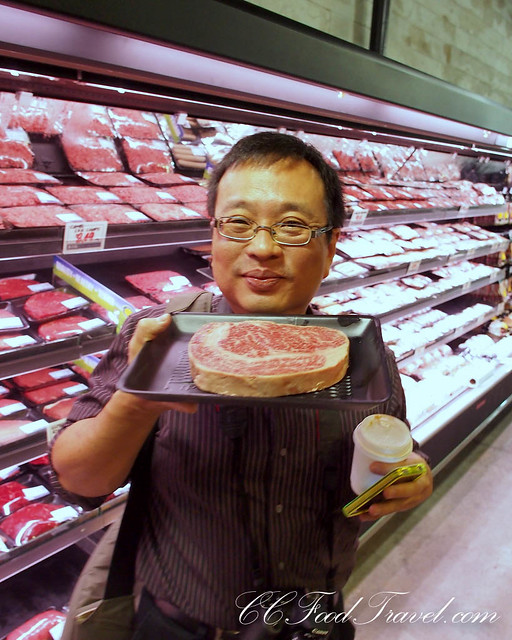 At some point Sharone tells Fatboybakes, to hold on to his meat for him, which FBB does, only too gladly:P 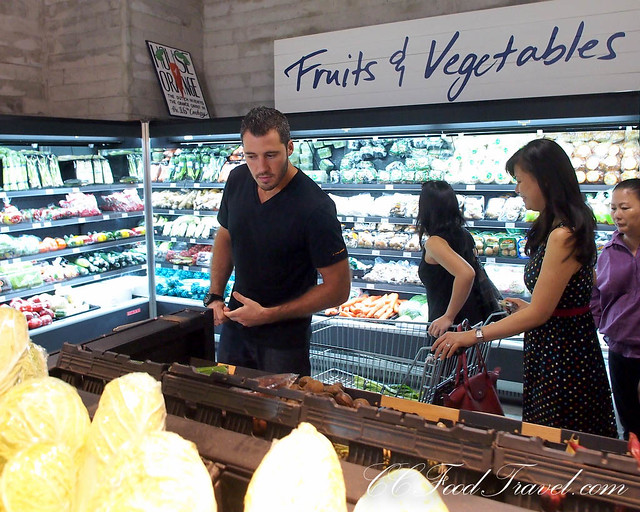 Once he started cooking for us, you could tell what an engaging fellow he was, and it would be hard for anyone, not to warm up to him. 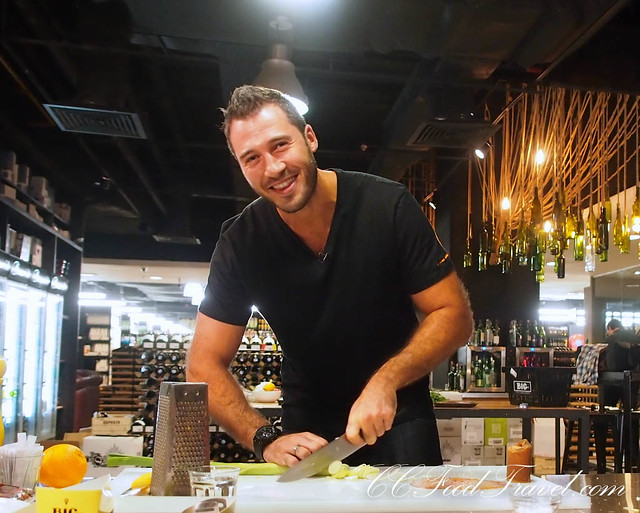 So Sharone cooks two things for us that day – a Red Snapper, Mediterranean style, and a huge hunk of Wagyu Ribeye, cooked Sharone style! 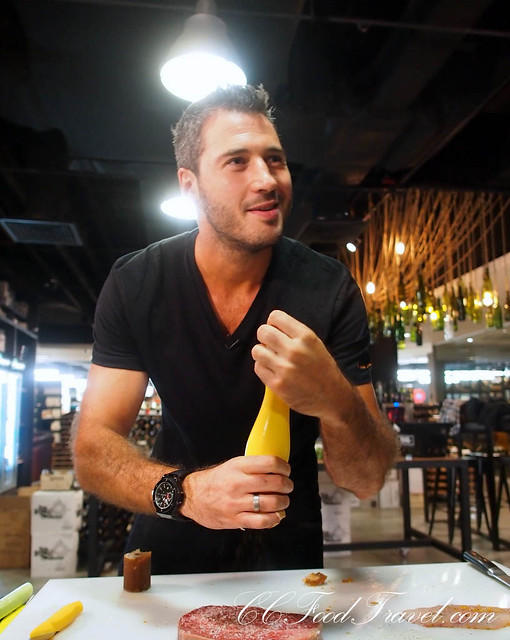 let the meat rest, then add salt and pepper, that’s all it needs, because all you will be cooking is the outer layer to produce a nice charred crust.. says Sharone.. 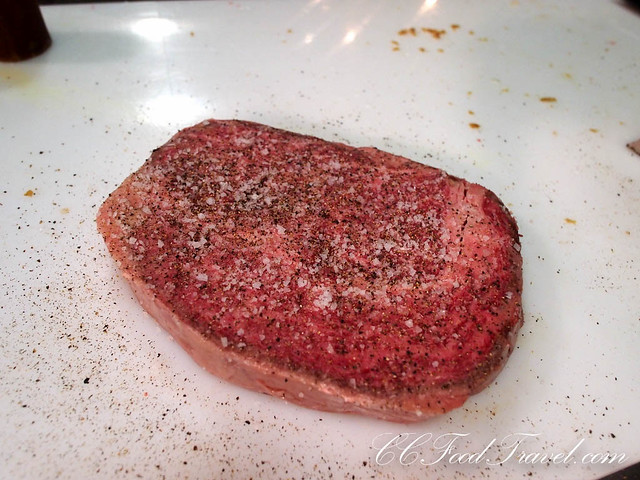 simplicity is best especially when you’re working with a divine slab of Wagyu Ribeye, which cost RM650/kg!! 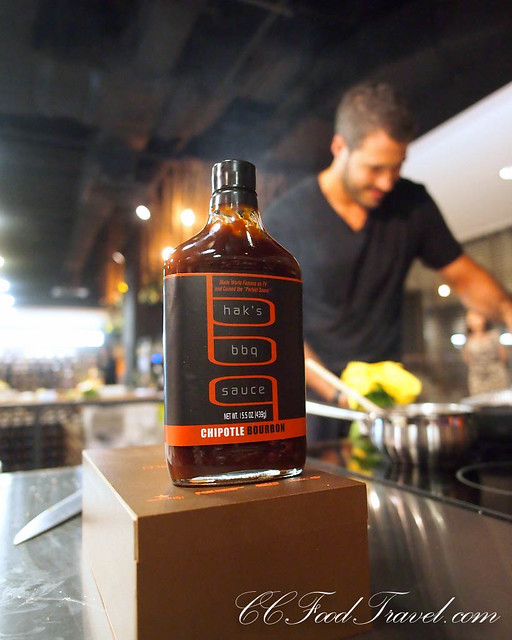 No steak is complete without a little Haks!

I asked Sharone if it would be a sin to add sauce to such a beautiful piece of prime cut wagyu steak. He told me – maybe with other sauces, but his BBQ sauce made with the freshest ingredients, did not have preservatives and only employed naturals sugars. So the flavour whilst smoky and tangy, is not cloyingly sweet nor overpowering, unlike your average BBQ sauces. 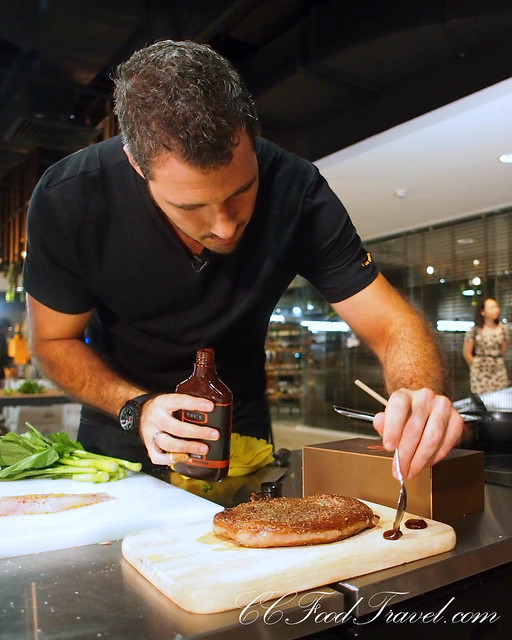 And once I had a taste of the Wagyu ribeye, cooked medium rare, with just a dab of Hak’s, I was a believer. Out of this world.

Hak’s BBQ Sauce is indeed a gourmet BBQ sauce. Sweet and tangy flavors hit first, then caramelized onion and garlic. Finally a smack of bourbon and smoked and roasted chiles round things out. You’ve just had a mouthful of Hak’s Chipotle Bourbon BBQ Sauce! We were certainly honored to be among the first to review this delicious gourmet BBQ Sauce as it is not even in the market yet .. but soon to be at BIG!

This sauce was actually known as the secret weapon on the MasterChef series, because when Sharone introduced it, he knocked the ball out of the park, even with the toughest food critics. As a finalist on the first season of FOX’s hit culinary competition series MasterChef Sharone’s refined sauces were praised throughout the competition, and now here we were, trying it out for ourselves. The ingredients include, apple cider vinegar, tomato paste, molasses, brown sugar, onion, garlic, less than 2% of each of the following: salt, spices, ground dried chili peppers, mustard flour, black pepper, natural flavors, soybean oil. And if you like thick dark sauces (non of that runny rubbish), you will like this – thick, chunky texture and a dark mahogany color.. there are tiny scattered bits of veggies and peppers that really make for a big taste in the mouth. 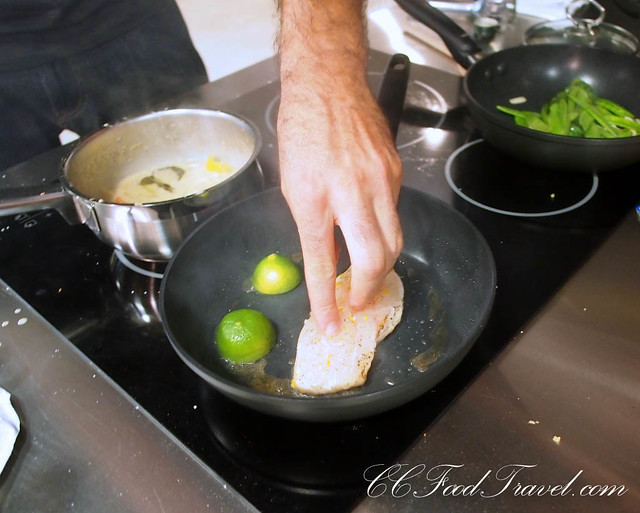 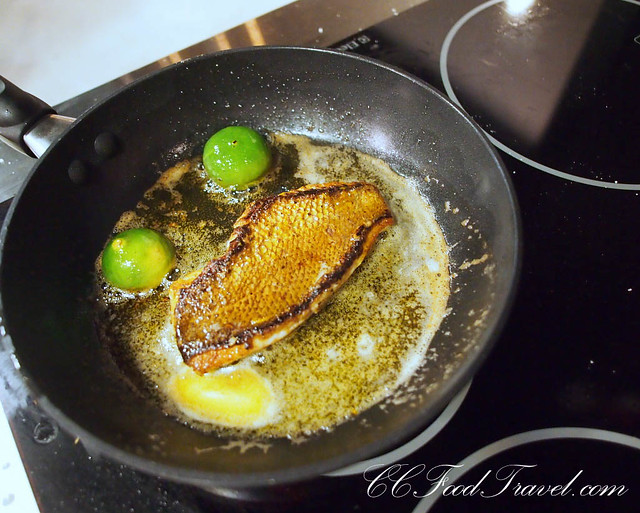 There’s orange zest and lemon zest, salt and pepper used to season the red snapper. Sharone also uses some gula melaka, as a substitute for palm sugar. For the fish sauce, he throws in the ginger, chili padi, kafir lime leaf, lemon grass, ginger flower, into some hot grapeseed oil. After sauteeing the herbs for awhile, he adds coconut milk, and palm sugar, and a crazy aroma of smells fills the room making us super hungry! 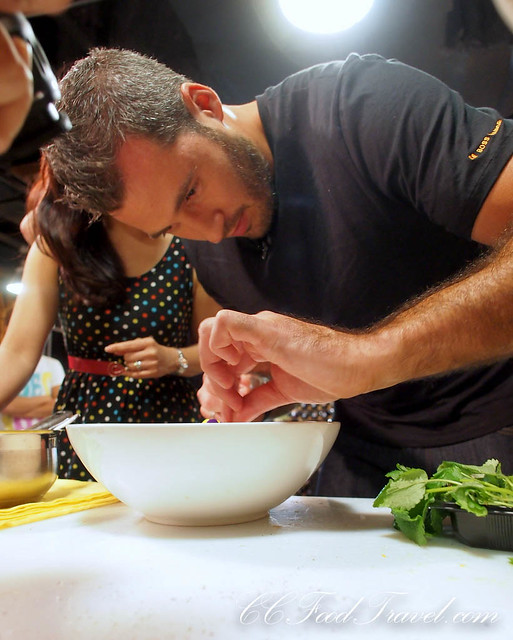 Such a big boy, but so gentle with it comes to putting the finishing touches to his food! 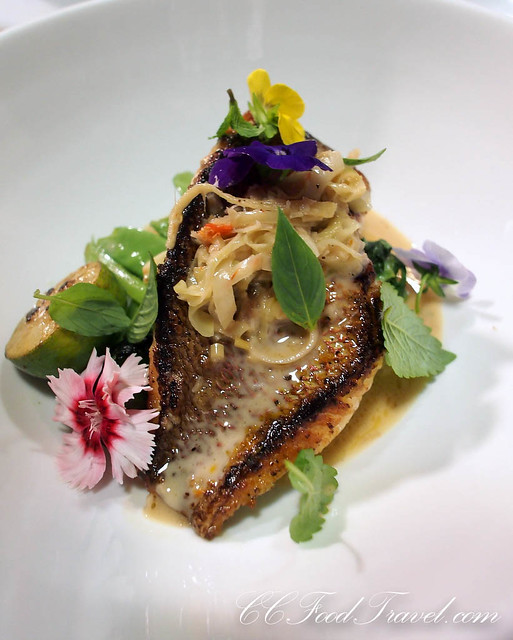 Check out the plating skills of Sharone! Terrific right?

Fiona Anne, senior manager of Fox International Channels Malaysia, said that Hakman was one of the most outstanding and engaging contestants in MasterChef US, and that he’s an immensely talented chef and a perfect role model for Malaysians passionate about food and who aim to make it big in the world of culinary art, and I am inclined to agree! He truly is that amazing! 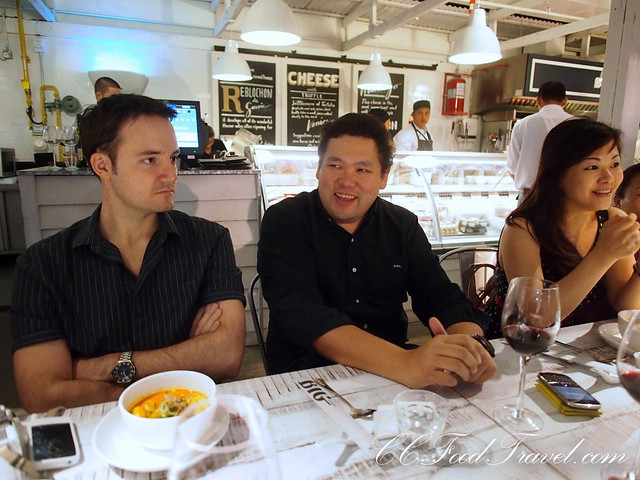 Well as if the entire cooking demo, rubbing shoulders with the super hot Sharone and eating his food and amazing gourmet BBQ sauce was not enough, we ended the event with lunch with Ben. That’s right – the “B” in BIG. That Ben 😉 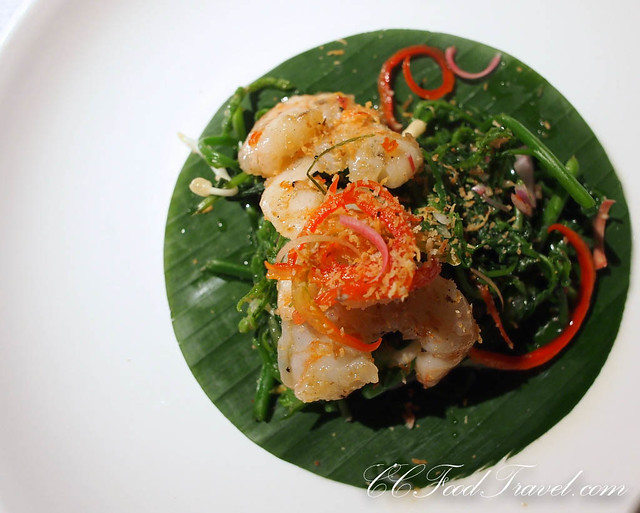 We had a 100% Asian style lunch at Ben’s General Food Store, which was fine by us – starters of prawns and baby fern shoots (pucuk paku)

Crunchy, springy prawns with a terrific limau purut flavour. The pucuk paku was soft, and delicate – the way I like it. I really dislike how some places serve you the old fibrous sort that are tougher to chew than cow hide. 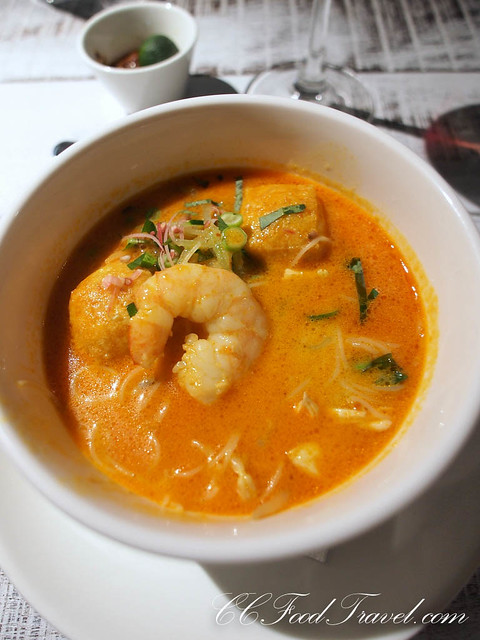 A thick, cream coconut base which was bursting with condiments.. loads of chicken, prawns and tofu pok – almost more than the rice noodles itself! 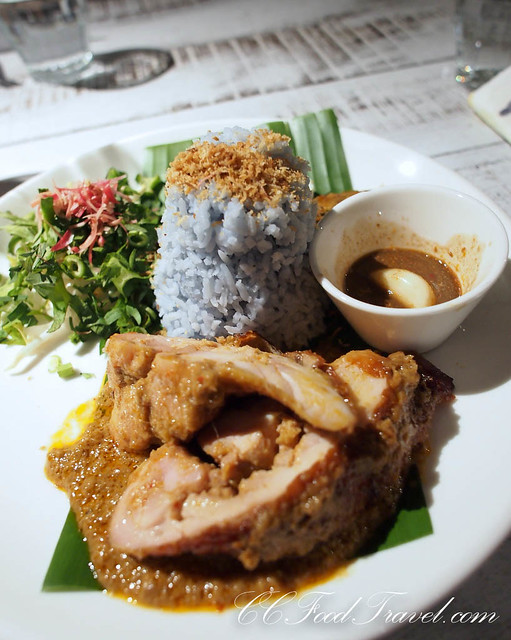 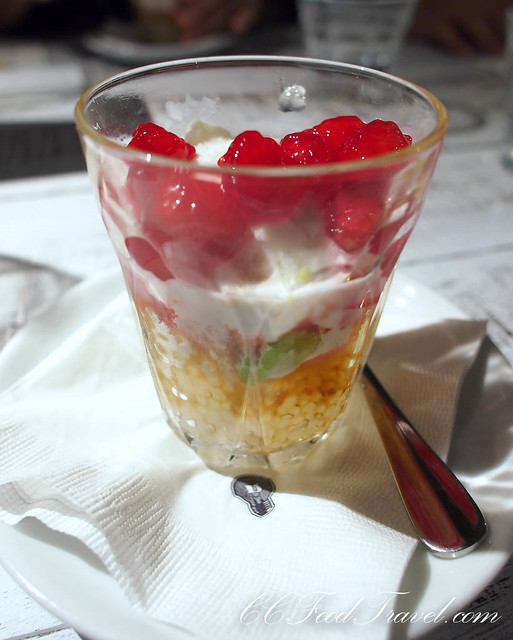 A lovely sago, and chestnut dessert drenched in coconut milk

Wow. What a day out. I was feeling a little star struck during the time spent with Chef Sharone Hakman, and the nice feeling kept me going through the day. I have a nagging suspicion that Hak’s sauce probably had something to do with the nice warm feeling in my stomach was well;) 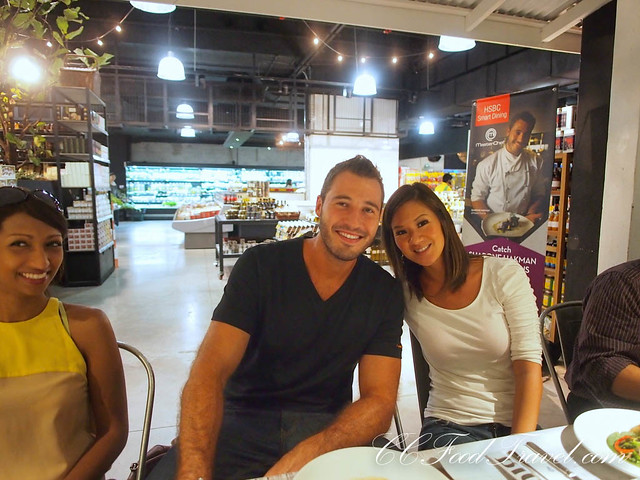