Famed for its beautiful, warm, turquoise waters of the Andaman, and pristine sandy beaches, Phuket is a paradise that many travelers find irresistible. A big part of Phuket’s beauty is that its beaches are lined with lush, green tress that offer shade and habitat for wildlife living along the shoreline. Long recognized as one of the world’s Top 10 diving sites, Phuket is one of Thailand’s most important tourist destinations, and it’s all about the water, water sports, titillating seafood and of course the infamous night life. 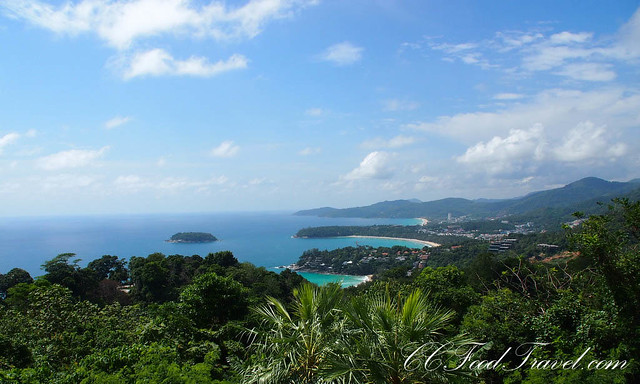 All in all, Phuket has 17 sandy beaches to choose from. Each beach has their own distinctive charm and many folks have their favourites, which they will keep returning to religiously, during the high season.

Here are 10 of my favourite beaches in Phuket, that I think are worth visiting.

Karon is the second largest of Phuket’s tourist beaches at 3 km length, some 20 kilometres from town. Generally quieter than neighbouring Patong Beach, it is especially popular among families and couples, and less popular with singles than Patong for obvious reasons (less late night action!) Karon is also, just a few minutes’ taxi ride from Kata, but has none of Kata’s noisy buzz. If you want to slumber in quiet, without being too far from the party, Karon is the beach for you. 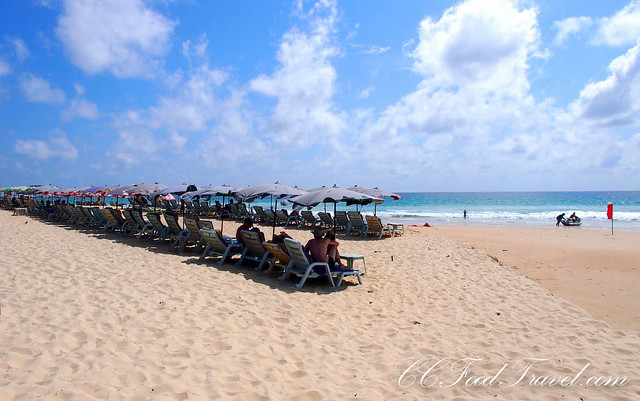 Large resort complexes line the opposite side of the road from the shoreline, but the long, broad beach itself has no development. The sand is very white, and squeaks audibly when walked upon. The southern point has a fine coral reef stretching toward Kata and Bu Island. Also, there is a wide pedestrian / bicycle path on the beachside of the road running the length of the beach. Most Restaurants, bars, tour companies and other non-hotel businesses are at the north central end, near the traffic circle, or near the south end, on Bangla road connecting the back road with the beach road. The northern third of Karon Beach is essentially undeveloped and flanked by Nong Harn Lake which is the largest beach side park in Phuket offering a nice exercise/jogging/cycling path. North Karon also offers white beach and clear water with no crowds. 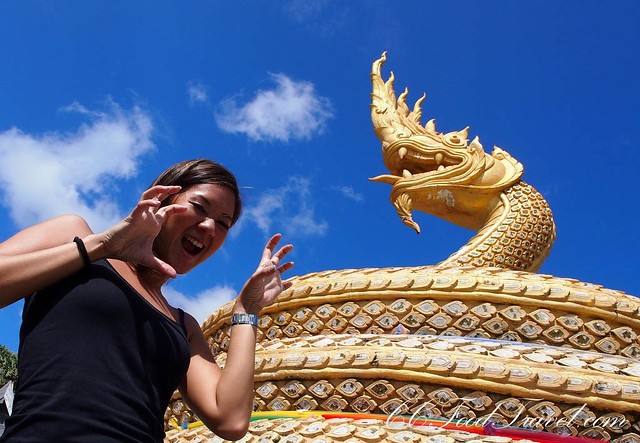 The best landmark for Karon beach would be the dragon serpent (Naga) – we took a photo here on our honeymoon 7 years ago, and now I am back to take yet another photo!

Bang Thao is a large open bay with one of Phuket’s longest beaches. It was once used for tin mining, but has since been developed into a luxury resort. Most of it is occupied by the Laguna complex, a massive five-hotel development with golf course. There are, however, accommodations available outside Laguna at the bay’s south end. 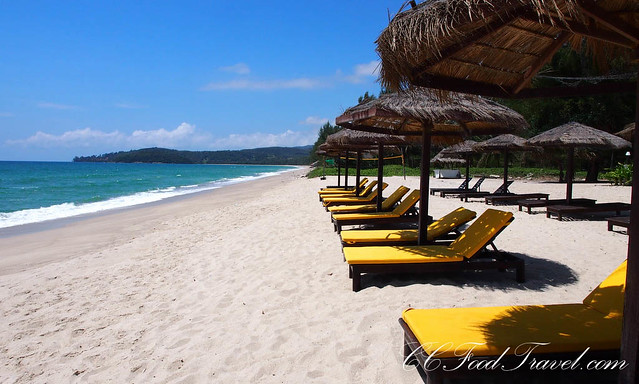 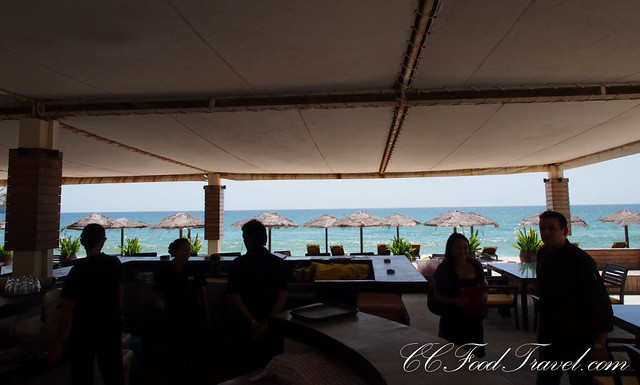 the clubhouse at Mövenpick, that faces the most pritine spot of beach on Bangtao

Dry season swimming is excellent, and at the bay’s north end is a smaller bay, almost completely enclosed, at the mouth of which is some fine coral. Plenty of places to eat, tour companies, and other tourist facilities are available either at Laguna or in the nearby town of Cheong Thale. Bangtao is arguably the most up-scale of Phuket’s beaches, and it happens to be my favourite! 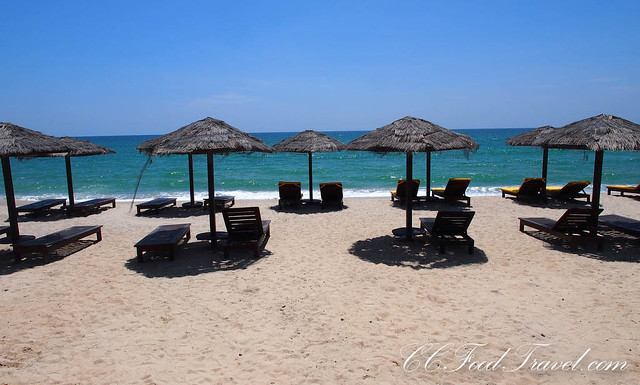 Patong beach needs no introduction. This is where the action is, and this is were tourists flock to, well, for the action of course. Patong Beach is the most popular and well-developed beach on Phuket Island. 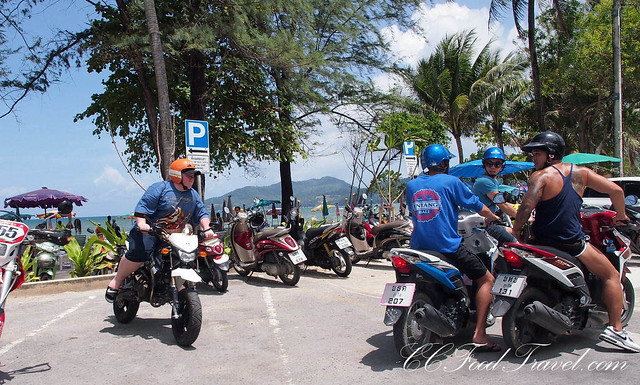 Actually, Patong Beach is perhaps more famous for its nightlife than the 2-kilometer beach that runs the entire length of Patong! If you walk along the streets, you will not be sort of bike rental shops, souvenir shops, girlie bars, pricey seafood restaurants, dive shops, travel agencies, hotels and everything in between. Scantily dressed Thai girls (and boys) booming sound systems, pulsating clubs, and copious amounts of ice-cold Singha will be consumed under the stars before the night is up. Boys checking out girls, checking out boys.. all part of the excitement of being on Patong – never a dull moment you can be sure. 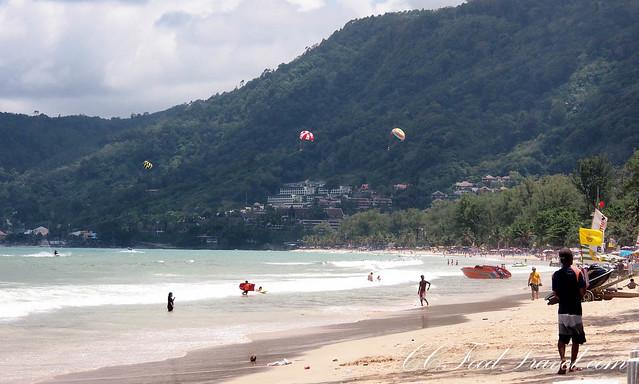 Hat Patong is the island’s most popular beach. Parasails dot the horizon at all hours of the day as people partake in water sports for kicks. On December 26, 2004, Patong Beach along with many other areas along the western coast of Phuket and Thailand were struck by a tsunami caused by the 2004 Indian Ocean earthquake. 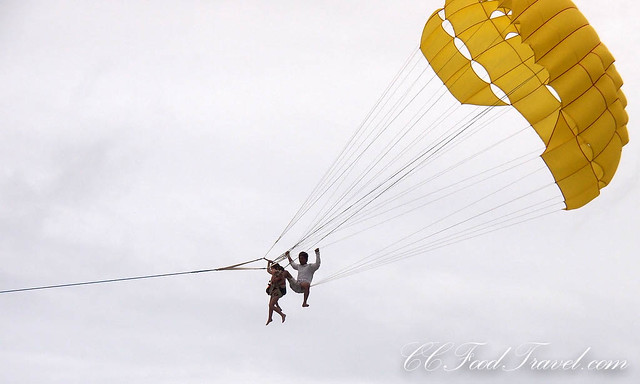 parasailing can be done in tandem with an instructor

The wave caused a great deal of destruction to the waterfront of the beach although the destruction was not nearly as bad as nearby in Khao Lak. It took probably less than 6 months to rebuild 80% of what was destroyed and 1 year after you could hardly not see any traces of destruction caused by the Tsunami. 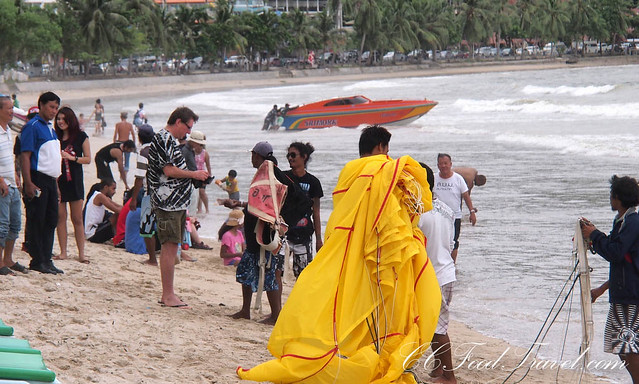 pay up for the short 10 minutes of a thrill ride!

This beach is a favoured spot for witnessing sunsets. Kamala provides a haven for those who prefer the quieter life. Although the southern end of the beach can get busy in the high season (end of October till middle of May), the northern end is peaceful all year round. 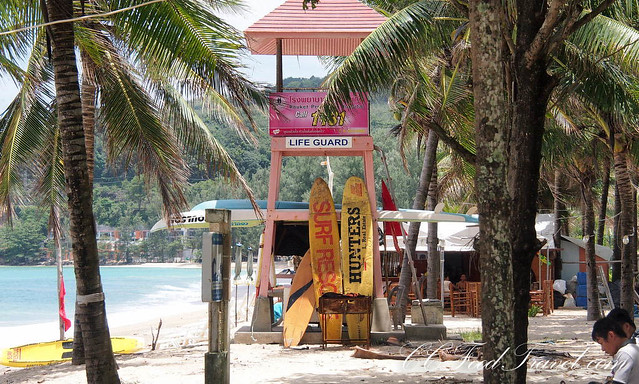 This is one of my favourite beaches too.. shady and cool, it reminds me of a sleepy beach town.. 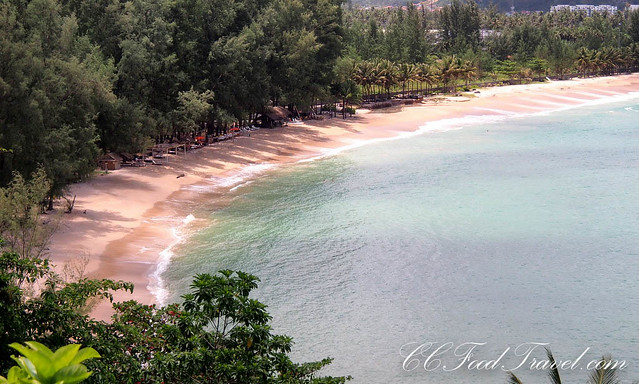 Kamala Beach has plenty of deck chairs to rent for those who want to just lay on the beach and enjoy the sun. In the early mornings, there is enough space to run and jog, play football or beach volleyball and there are plenty of food stalls and little bars for snacks and drinks. One of the best things is that the beach on Kamala has lots of green – trees and bushes and foliage makes it a beautiful beach indeed! 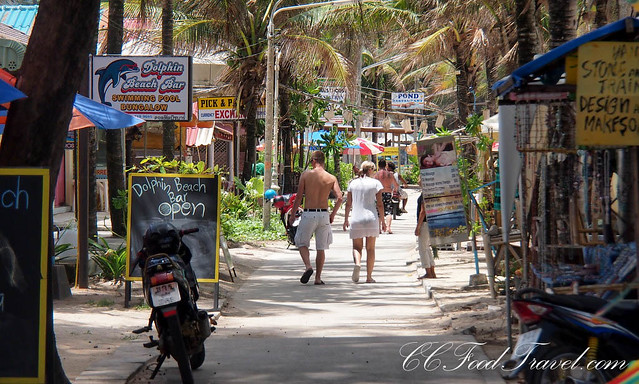 Situated 20 kilometres from town, beautiful Kata is a scenic gem, its clear water flanked by hills, and picturesque Pu Island sits offshore. Kata retains a village feel at its northern and southern ends and is perhaps more family-oriented, its one-kilometer long beach more peaceful than Patong. 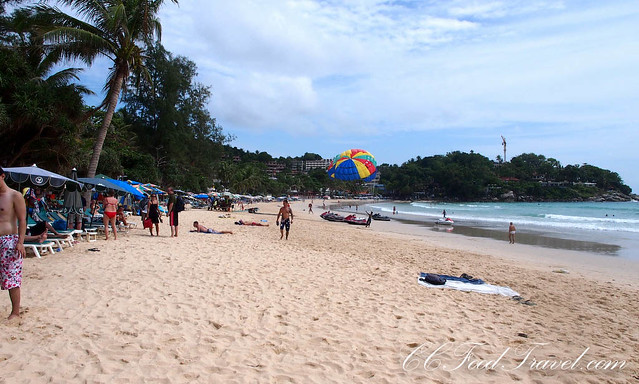 The main road runs from Kata center at the end near Karon Beach all the way to Kata Noi Beach. In Kata center you can find many shops that sell tourist gifts. These shops can be grouped into Gift, Suit, Music and Massage. Restaurants are well priced and food is good. Bars start further on down the road towards Kata beach.

Kata beach is split into two with Kata Yai Beach to the north, and the smaller and more secluded Kata Noi to the south. Kata Yai is a particularly scenic beach, with pristine powdery sand and gentle lapping waves. Kata Yai, like Karon Beach to the north, is a hit with families. Located on the southwest part of the island, Kata Yai and Kata Noi are located on a bay just south of Karon Beach. The beaches here are also superb. 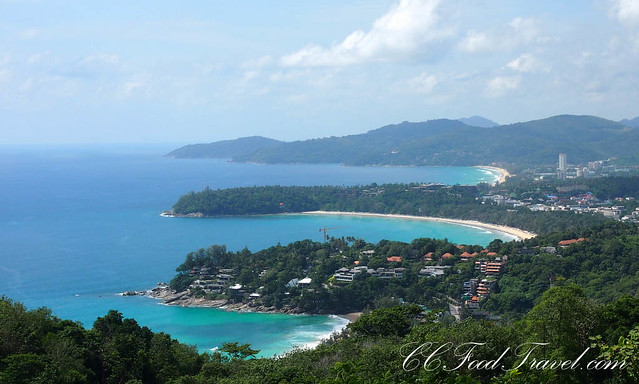 Easy to get to, only 7 km west of Chalong Circle, the area has developed a lot and is rather upscale now, with more than 30 hotels and bungalow complexes. It has less rural flavor now, but is less crowded and hectic than Patong. The two beaches, Yai to the north and Noi to the south, are divided by a rocky cliff. An island in the bay, Ko Pu, is within swimming distance of the beach and provides good snorkeling, as does the south end of Kata Noi.

No photos for this one because my battery died on me, but the northern part of Rawai beach is known as Hat Mittraphap, while the southern section has a village and port called Laem Ka. Rawai is located at the southern tip of Phuket. It is much less touristy than nearby Kata and Patong beaches and an excellent place to experience some real Thai culture. This palm-fringed beach is best known for sea gypsies, a formerly nomadic fishing minority believed to be of Malanesian descent.

The name means Lion’s Point. The beach is in a small, curving bay with rocky headlands at the foot of forest-fringed cliffs and is among Phuket’s most beautiful spots. I love this beach – it’s great for tanning and swimming, and even snorkelling and with great little restaurant on beach. 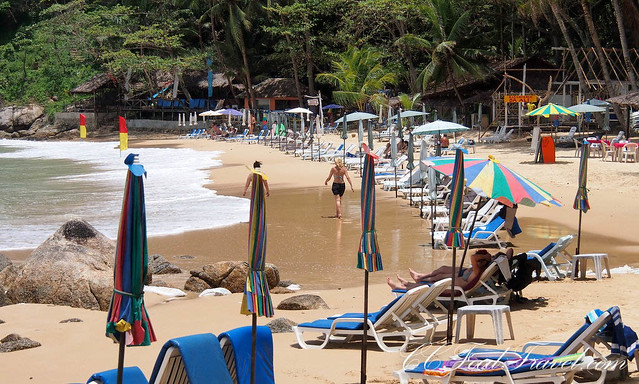 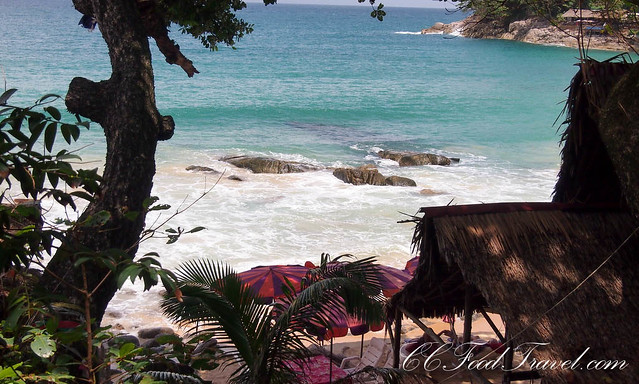 However, some might feel that the beauty of this beach might be marred by a number of beach touts who try persistently to sell people things they do not need. But no I guess that’s part and parcel of being in Thailand! There is a rather steep climb back to the car park at the end of the day , via some steps so that’s a great cardio work out for you as well. 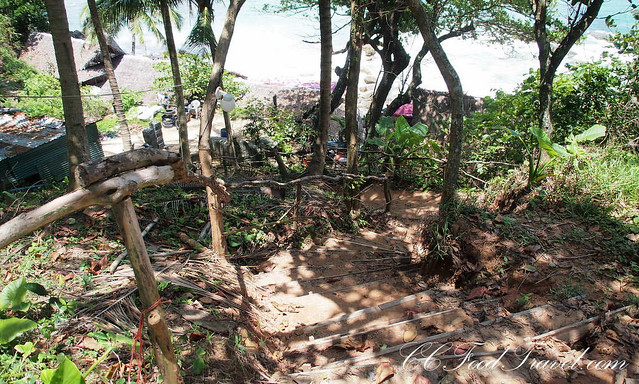 steep steps.. going down is easy, try running up!

Just north of Patong, Kalim Beach is a small bay with a rocky coastline and small sandy beach just steps away from the mountain coast road. Kalim Beach has spectacular sea views that encapsulate the whole of Patong Bay, which is stunning by day or night with it’s gorgeous beach and glittering night lights. 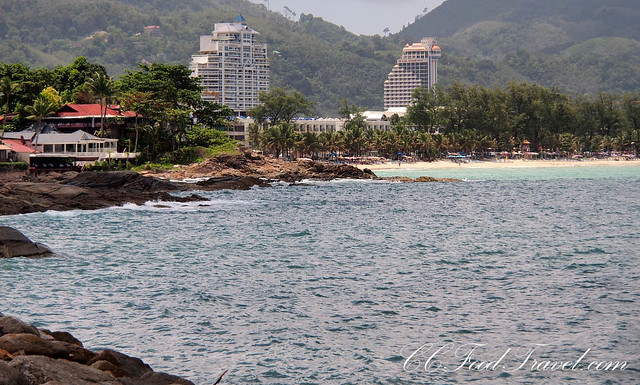 Situated on the beachfront and built into the hills, you can find on Kalim Beach, some mid range accommodation such as Orchid Hotel and Spa and Malibu Island Club Resort. More upmarket options include Diamond Cliff Resort and Spa and the Blue Marine Resort & Spa.

This beach is clean and peaceful as there is not much crowd. Restaurants and cafes located along the beach so its easy to grab a drink or bite. The waves are strong here though. Surin Beach lies a few kilometres north of Kamala, and has one of the most beautiful beaches on Phuket Island. 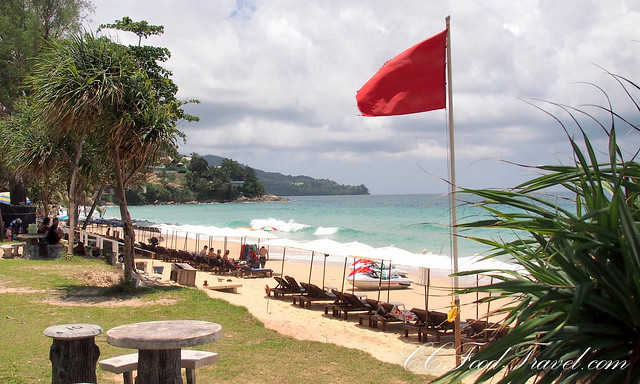 A soccer field, and the remnants of a over-grown golf course have kept the hotels well away from the sand, and it’s a shame that other beaches on Phuket haven’t developed in a similar manner. A fantastic mix of restaurants, food carts and bars. Take a drink or two at he coolest beach club on the Island Catch and then have a great dinner at Taste – just along the beach path, past the car park.

And that concludes our Top 10 Beaches in Phuket. If you’ve been to Phuket which is your favourite beach and why?