This is the first time I have ever set foot in Songket, and I was surprised to see the place so crowded with patrons. Songket serves authentic Malay food in a Malay-house setting, a restaurant located on Jalan Yap Kwan Seng.

If you are not familiar with the traditional Malay homes then you will be surprised to see that they are built on stilts and that they have a flight of stairs leading to the main hall. Songket is of course a more modern version of this Malay house, and whilst it is pretty traditional looking on the outside, there are no stilts. The proper Malay etiquette is that you are required to take off your shoes and clean your feet at the entrance, before entering the house.

Malay meals are not served in courses, rather, all food are presented at the same time. The staple is always rice, and then there will be a host of other dishes that go with the rice. Dishes with kuah (gravy) will have a spoon for your to scoop the sauce, but for dry dishes, you simply break away a piece of the food with your right hand from a communal dish, and proceed to eat with your hands.

In the traditional Malay set up, you sit on the floor to eat. The way men and women sit are notably different also. Men crisscross their feet in front of them – bersila. Women fold both their feet on one side – bersimpuh, and normally on their right side. 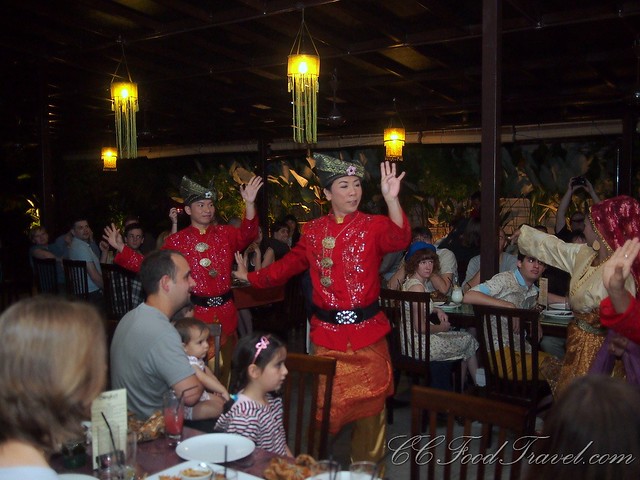 Well, luckily for us, Songket is a traditional Malay restaurant but with modern dining practices. We get to keep our shoes on, sit at a table and eat with cutlery and not our hands.

Looking around the place, with almost 80% of the clients being foreigners, you can tell that Songket’s positioning – introducing Malay food and culture to tourist, has rather hit the nail on the head. When we arrive, the place is packed to the rafters with Mat Sallehs/Ang-Mo (foreigners) , attending what looks to be a wedding celebration. 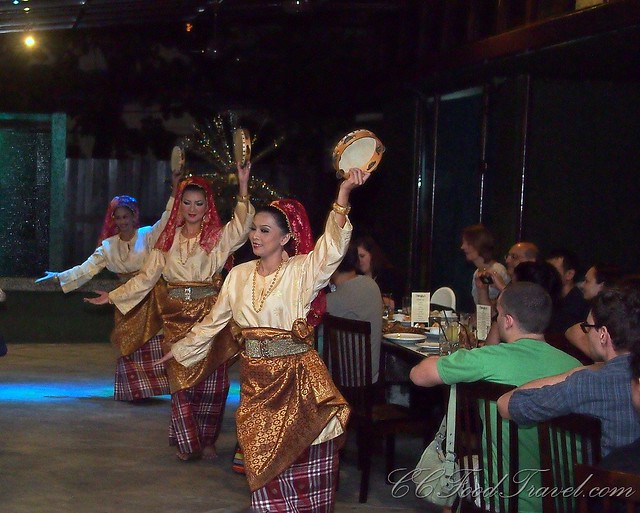 Here at Songket, their speciality is the rusuk panggang (roast beef ribs) but unfortunately, Head chef Mohd Zamri Jemintan was fresh out of rusuk, and I suspect the large wedding group had something to do with it. Apparently the Chef only uses chilled beef imported either from Australia or New Zealand for the dish and the meat is cooked for two hours until it becomes tender.. sigh.. too bad we missed it. To appease our growling stomachs, the Chef produced Lamb instead – not bad but the meat could have been more tender. Certain portions were hard. The Lamb marinade had an Asian spice and flavour to it. Some pretty tasty Malay rempah was employed in the seasoning of its meat, and the lamb hardly needed any sauce to enhance its flavour, though the dish came with peanut sauce. 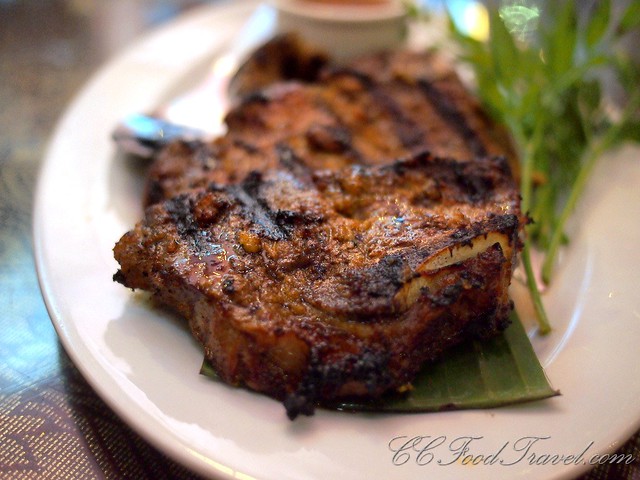 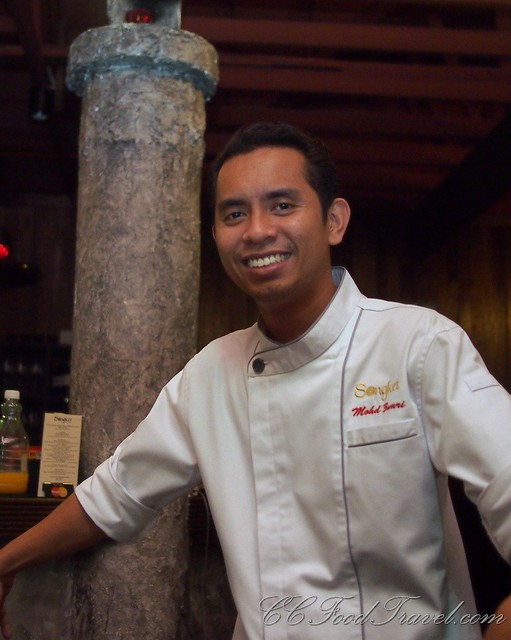 Among the must-try appetisers include the begedil/bergedil (potato and meat cutlets), cucur udang (prawn fritters), popiah goreng (spring rolls) and the kepak ayam (chicken wings). Of these, I liked the chicken wings best but the portions were really tiny. As for the main course, the ayam masak lemak (chicken and nangka hearts, cooked in a rich coconut curry) , the Kerabu Pucuk Paku Pakis (Wild Fern Shoots Salad) and the Kerabu Mangga (Mango salad) were my favourites. I could have just eaten this with tons of rice and called it a night. Some of the unusual highlights of this restaurant include interesting desserts such as the tiramisu made with durian, and a pandan pudding. The pandan pudding had a thick and rich consistency to it – drenched in gula melaka and coconut santan, I found this dessert rather delicious. 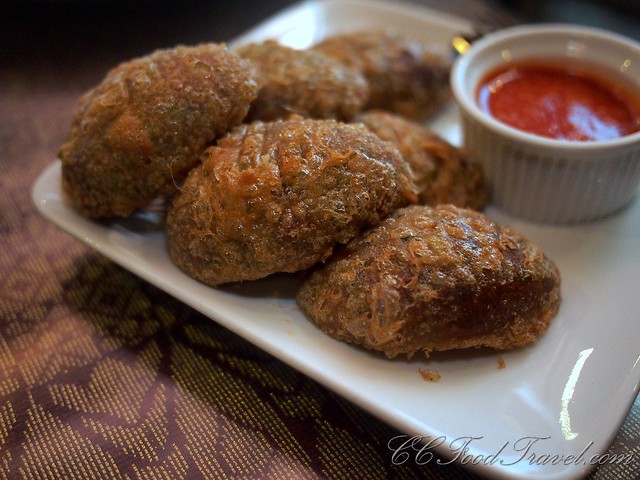 begedil – is a deep fried minced meat and potato cutlet. It contains sauteed onions, ginger, cloves, star anise, cinnamon stick. These are rolled into balls and flattened slightly. The the potato meat balls are dipped into an egg mixture and coated well before frying.

Bergedil is also an essential component in soto ayam and served as an accompaniment or a topping, together with cucumber, bean sprout and a few other garnishes. It can also be a delicious snack, when eaten on its own as an appetizer, like here at Songket. 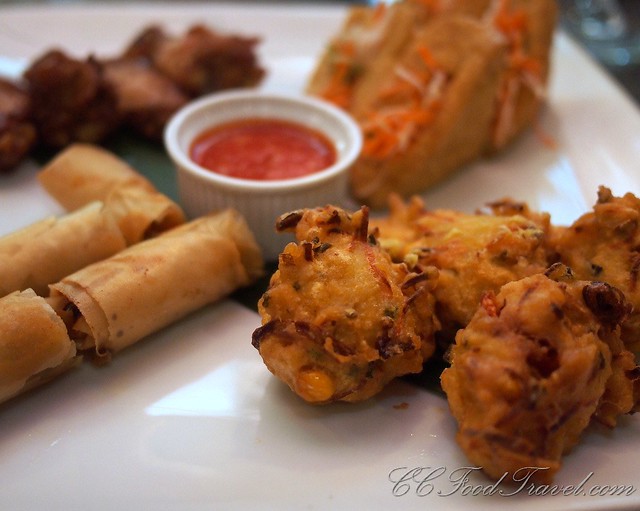 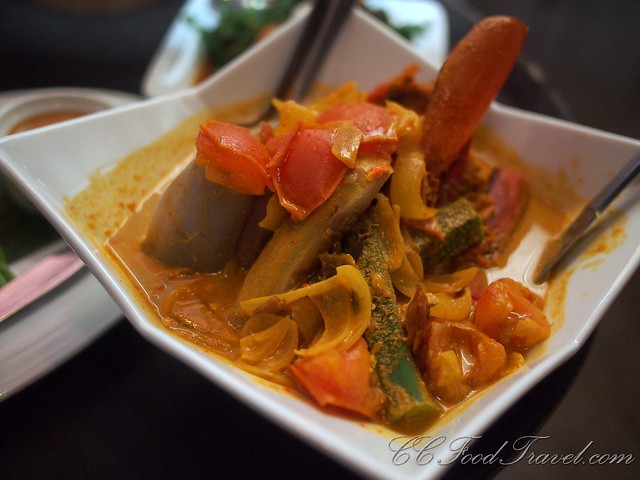 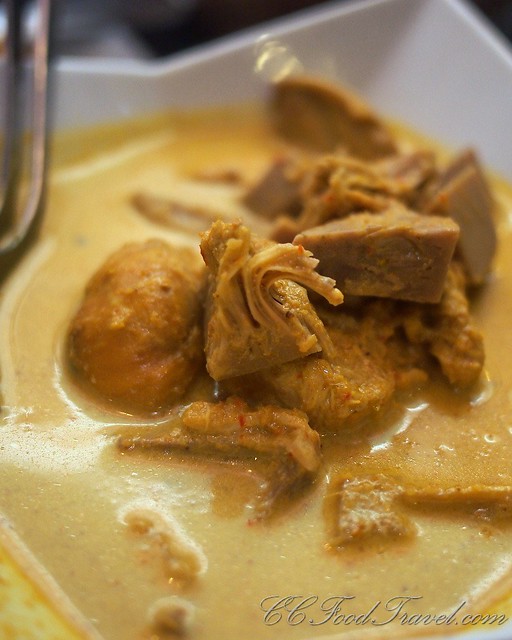 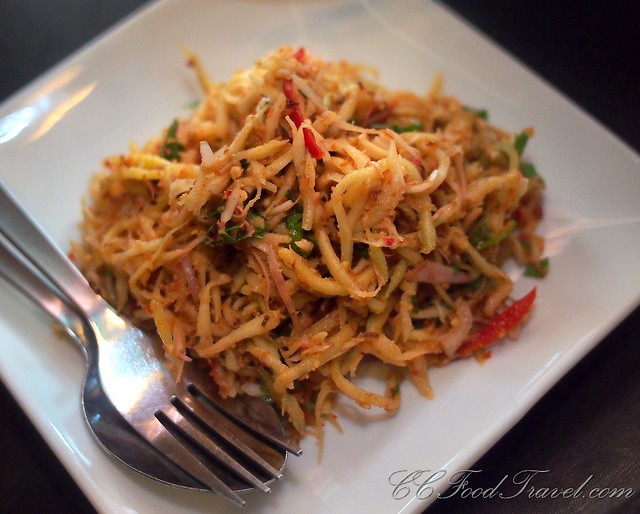 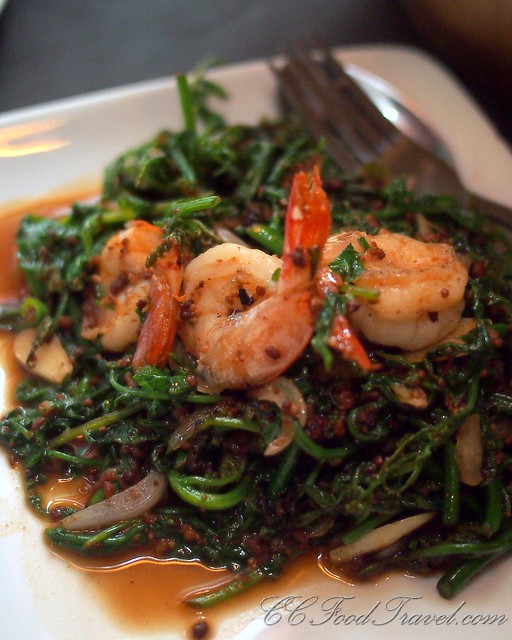 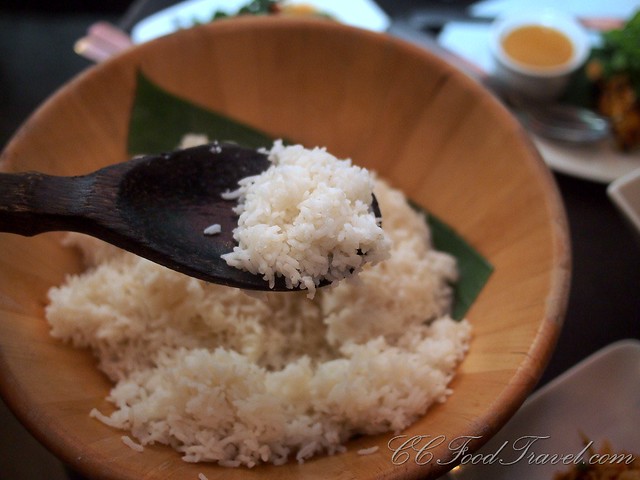 nasi .. the all essential RICE! 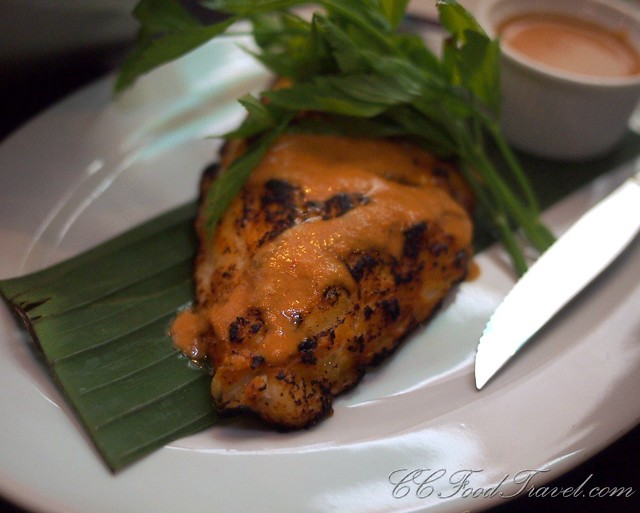 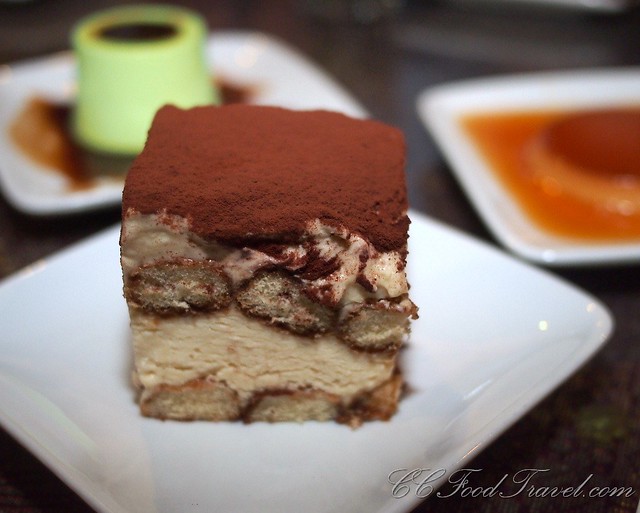 Here is the rather unusual durian tiramisu (which I don’t eat!) and also the best dessert that night was the pandan pudding (green – in the background)

Entertainment in the form of some cultural performances were really entertaining for the foreigners. These cultural performances are held from Mondays to Saturdays and include ethnic dances. Songket celebrates its 1st Anniversary this month. In conjuction with the celebration, Songket restaurant is holding it’s “Signature Delights” promotion from the 15th of March – 15th of May 2012. For RM80++ nett per person (min 2 pax), customers will get to enjoy all the Songket signature dishes plus dessert and also a signature mocktail. Sampling portions will be served so that customers do not need to commit to a full dinner portion. 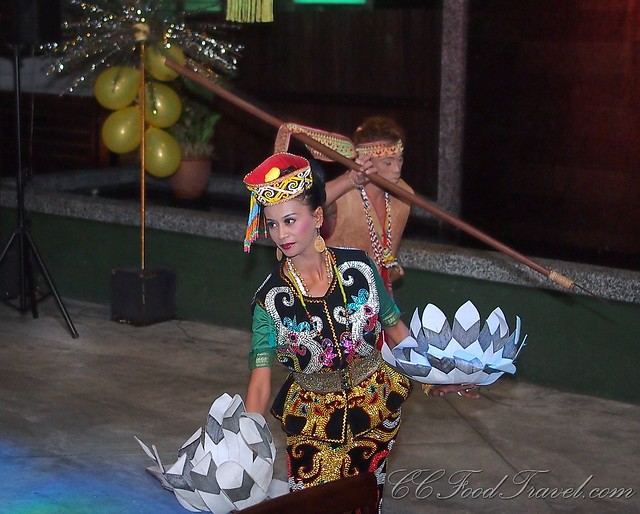 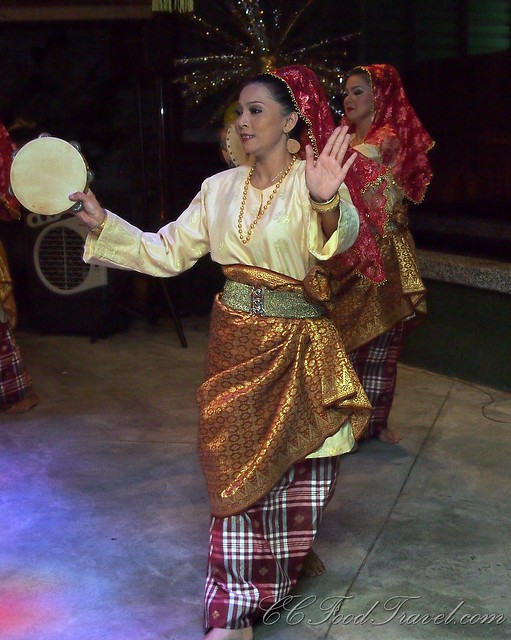 The restaurant is open for dinner every day from 5pm onwards.

Just to set things straight, it wasn’t all play and no work. I did make it down to the excel convention center for my…