One of the first words that a Japanese colleague ever uttered to me was, Mushashi ramen. It was one of the first ramen shops ever recommended to me, the first time I visited Japan, but it was several visits later, before I finally made it there, even though it was a short 10-minute walk from my hotel in Shinjuku. Call it ignorance, or the heydays before my foodie escapades kicked in but, yeah, it did take me a while to visit this cramped little ramen shop that always had a queue. This shinjuku shop was the pioneer stall and since then, they have opened 8 shops, each one varying slightly. The most interesting being the Kichijoji one, which has seasonal experimental noodles coming and going quite often.That was so long ago, back when I was still single and had just started working for this Japanese company. Ah, the glory days! 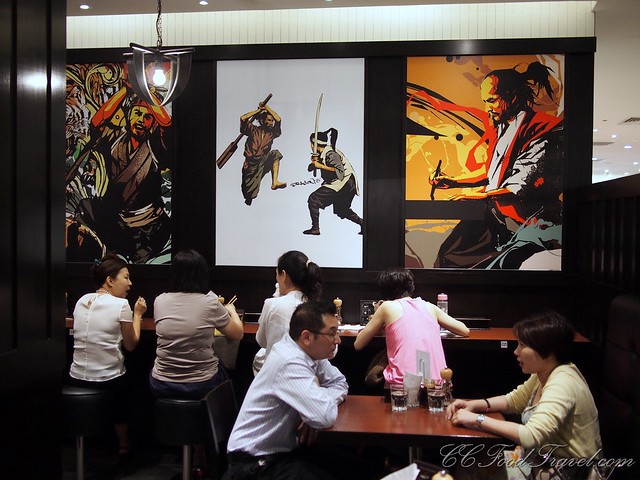 Menya Musashi.. true to form.. you have to queue for a seat at lunch time..

Menya Musashi is one of Tokyo’s best-loved ramen chains, and its founder Takeshi Yamada is often considered in the same league as Ippudo’s Shigemi Kawahara and Nantsuttei’s Ichiro Furuya. The shop is named after Musashi Miyamoto, one of Japan’s most legendary and revered warriors – he who famously wrote “The Book of Five Rings”. Illustrations of samurai with swords drawn can be plastered tastefully around the shop.

Now, this ramen holy of holies, has come to Petaling Jaya. Located on the 2nd floor of Isetan, the old-new wing of 1 utama the place is completely packed at lunch time. This entire second floor (a.k.a. Eat Paradise) is dedicated to Japanese and Korean dining, so it really is not unusual to be sandwiched between chattering Japanese ladies of leisure, slurping up on massive bowls of ramen. What makes Musashi ramen so special isn’t just their ramen, which is good to begin with.

A lot of times, eating ramen isn’t just getting a bowl of noodles to shove down your throat. The overall experience include the design of the shop, the service provided, and what I like best – the show that is put on in the kitchen. The open kitchen here is way cool, and the customers can watch the cooks preparing the ramen, behind a high counter ( you need to stand to see the hot pots of boiling water). When the guy that is cooking the ramen begins to drain the noodles, he lets out two super loud whopping yells, probably indicating the ramen is done. That’s just priceless – same as what is practiced in Shinjuku. 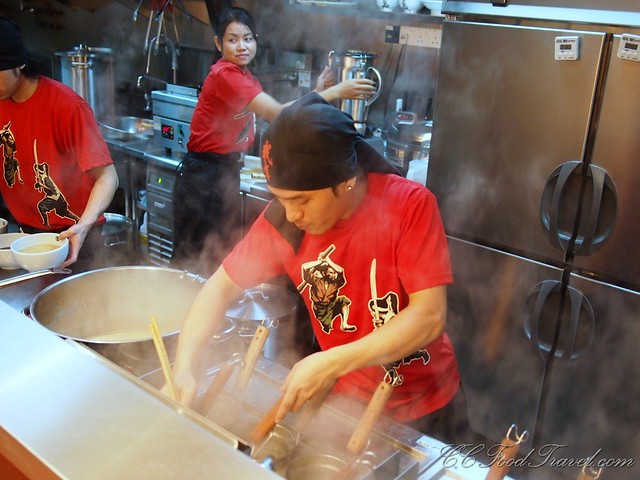 Open kitchen concept.. I love it when they put on a show! 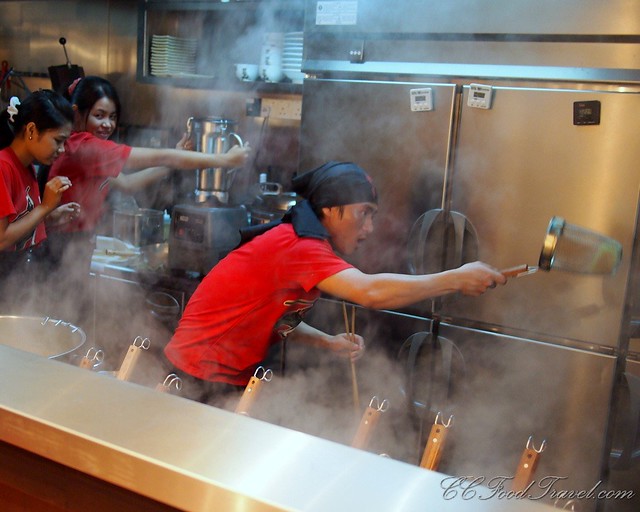 two yells, and we’re good to go! With a swift motion of a samurai executing a blow in a duel, he shakes the noodles out of the water and puts them into your bowl! So much steam.. this kitchen looks like a freakin onsen..

Anyway, after the lackluster experience at Yamagoya, I couldn’t afford to have my heart broken again, and I must say that Musashi ramen does live up to my expectations, and is Japan’s ramen at its finest, that’s found its way to our shores. These ramen are cooked in South Japan style, are of the thicker variety, and the soup is very rich, concentrated and flavorful. Their ramen is also made for eating warriors. Unlike Yamagoya, which I have always found to be slightly stingy with the amount of ingredients given their pricing, the serving here was more substantial and more bang for your dollar. Additionally, they also have Tsukemen, which is the dipping style ramen, and the portions are already massive – small being huge, medium being even larger and big, being monster sized! The price for ramen small, medium or large is the same, so just do the math and go for what you feel you can absorb comfortably! 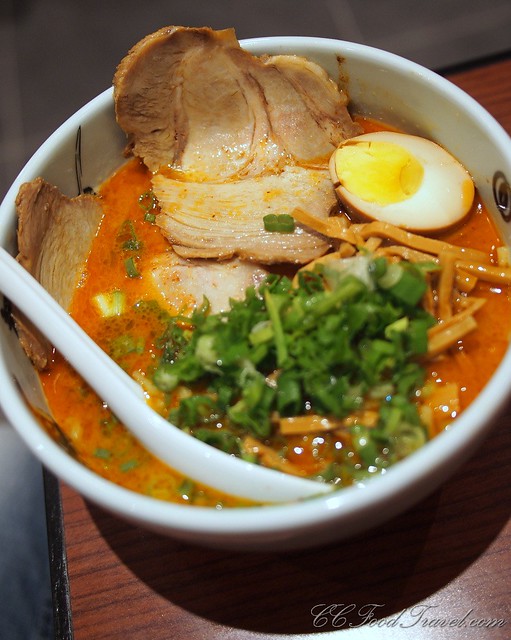 Signature Ramen, not to be missed! Kuro Musashi Ramen, RM26.00

Who can fault noodles that are insanely bouncy and thick? Menya Musashi’s noodles are different from the usual Sapporo and Kyushu types, cooked until al dente, with a slight chewy bite. The soup is mad tasty.. and the marinated eggs, divine. The 2 massive cuts of thick cha-siu/pork belly are really decadent. Talk about gigantic chunks, soft and tender after being stewed in sweet Japanese wine and soy sauce for hours. The murky broth of ramen that contained cha-siu, soft boiled marinated eggs, spring onions and bamboo shoots in tonkotsu broth was indeed a revelation. The light-brown broth, speckled with fat droplets had an orange-red hue to it because I chose the chili oil for my topping. 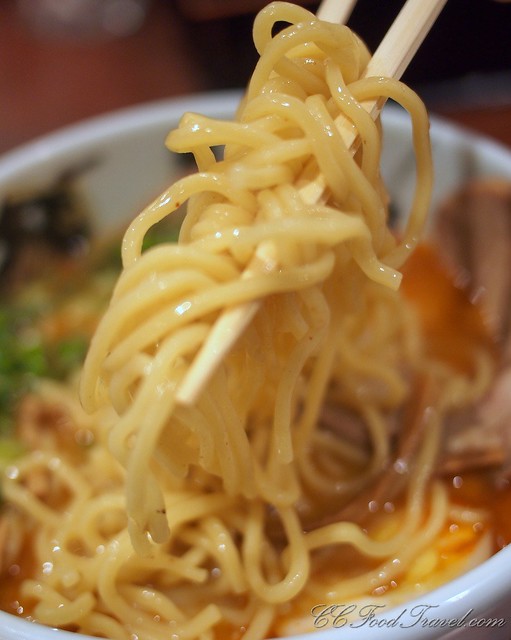 my Aka Musashi Ramen

Now back to the name that comes from a famous Edo-era swordsman, Miyamoto Musashi, that operates on the five key ramen principles of chi, sui, hi, kaze and ku to create an ideal bowl of Japanese ramen. There are three types of ramen soup base to choose from – the white (original), black (black sauce) and red (spicy). The black sauced ramen is a thick and salty broth cooked from a mixture of pork bones and dried saury fish. Collagen-rich with bits of marrow fat, this one is great for your skin;) The dark orange or red oil topping, is flavoured with sharp chilli oil, and is known as aka. This was my ramen oil topping of choice. 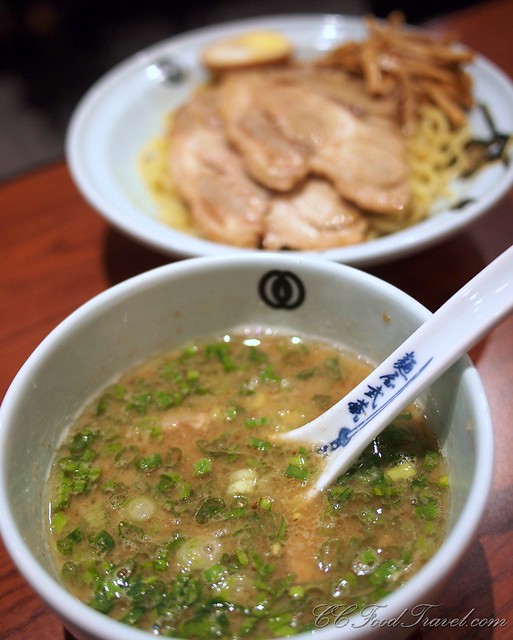 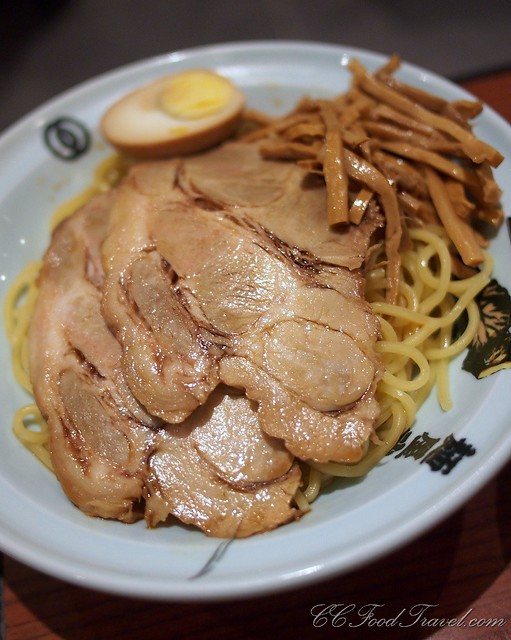 bloody massive portions and we are only having “small” ! Big eaters rejoice – you will be filled!

Popular in Tokyo also, are the ‘dry’ noodles – the Tsukemen, which is dipped in a richer soup-sauce.. salty as it is not meant for drinking. There are lovely fatty chucks of pork inside the soup which you are meant to dip and eat with your noodles. Another fab dish that is a must-order! 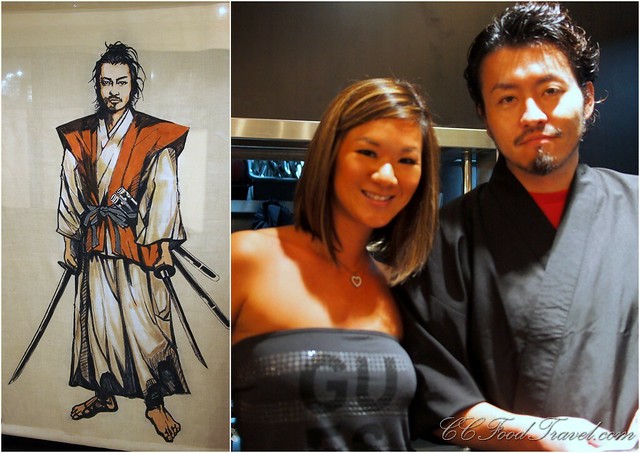 me and the super sleek samurai .. a.k.a. Chef Yamaguchi

Master Chef Yamaguchi is the boss of this ramen joint and he hails from Tokyo. He’s a cool guy, who speaks little English, but one of the Japanese- English speaking staff helped us get acquainted;) He was more than willing to take a photo with me! It’s times like these, that I wish I was “the ramen girl” cooking my heart out in the heart of the kitchen madness.

I like this place a lot, and not just for the dark and brooding samurai. Whilst I could not see myself hanging out at other ramen joints in KL before this, now I think I can. I have found a ramen joint worthy of my time, and stomach!

What would Christmas or New Year be like, without Mezze. Not very interesting I expect. But have no fear, if exciting your tastebuds is…