We’ve been asked by some readers and acquaintances on the PEN EP3 so today we’re putting up a review on the camera. We’ve had the camera for several months now and really enjoy using it. The camera came with a M.Zuiko 14-150mm (28-300 equivalent) lens for the micro four thirds.

Our other camera the PEN EPL1 is still actively being used. Fitted with a Panasonic 20mm f1.4 lens, that older model still provides excellent performance at various functions and locations. Now, armed with the EP3, a zoom lens and another Nissin di466 external flash, we are almost complete with long and short range shooting plus we don’t have to wrestle over camera usage as before.

We have another post on 2 other M.Zuiko primes lenses, f1.8 45mm and f2.0 12mm coming up soon. These new Olympus lenses made for the micro four third cameras can also be fitted on the Panasonic micro four thirds line. Olympus’s investment into more lenses for micro four third system demonstrates a long term commitment into expanding the product line and increasing the creative usage of the system. Great for us! We totally agree with the quality of the system as well since its been providing us with quality images and video this far. 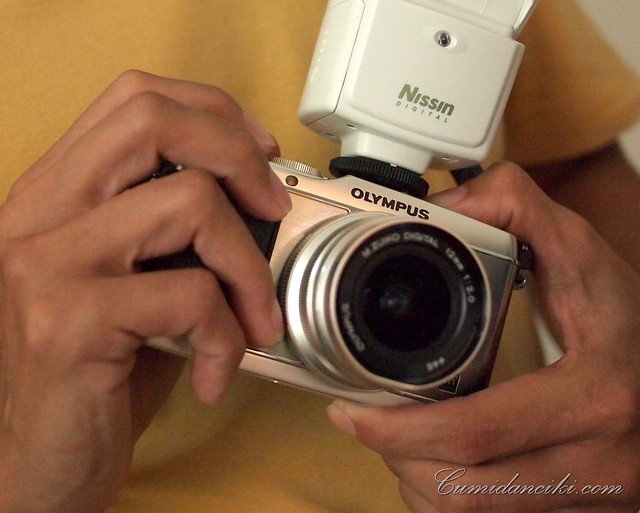 Why did we choose a prosumer level camera and not remain with a point and shoot? When we first started blogging, our camera was a red colored point and shoot Sony which was a good performer. The demands to upgrade to a better quality camera system came with our gradual improvement on our shooting techniques. Also uncompromising dimly lit dining environments produced less than spectacular shots and it was really time for a camera re-evaluation.

Of course there was a little social pressure as well. At events, we were constantly surrounded by many bloggers and journalists with their massive DSLRs making their signature shutter clicks and whirs, and external flash firings while we only had a wonderful digital shutter sound (that we eventually turned that off). Cumi bought a super zoom point and shoot, and an all weather camera for his work but these performed poorly in enclosed areas and dimly lit places, due to its small sensors. DSLR systems until recently, were very expensive, they were also heavy/large/cumbersome, and complicated to use so when the PEN system came out, we tried it and found its size suitable for packing ease and getting around.

Needless to say, the image quality improvement over our old point and shoot, was a great welcome. The PEN EP3 is one of the pricier micro four thirds. With such a high price tag, Olympus provides robust features for advanced photographers and budding photographers wanting more manual control but without having to lug around heavy equipment. 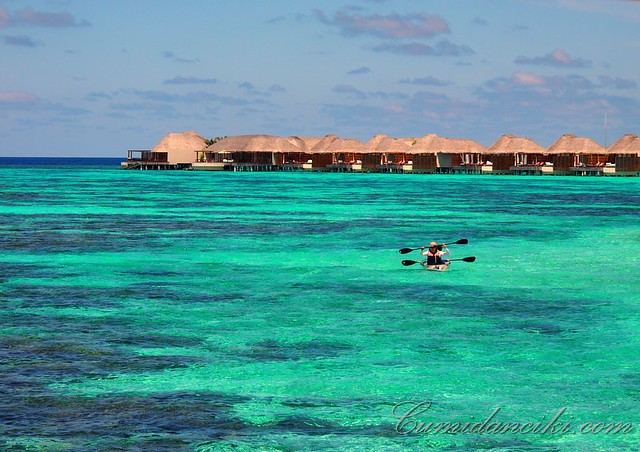 the maldives – taking great outdoor shots with your EP3 is easy

We did find out that having a DSLR does not necessary mean you have great images but having the ability to compose a shot draws the attention, and reduces the number of wasted shots filling up your memory (and your time to sift through it). To compose well requires learning and practice although some have a natural flair for this. Fortunately our dive into the PEN system provided a gradual learning curve to improve. To the naked eye, good images taken from micro four thirds rival some of those from DSLRs. 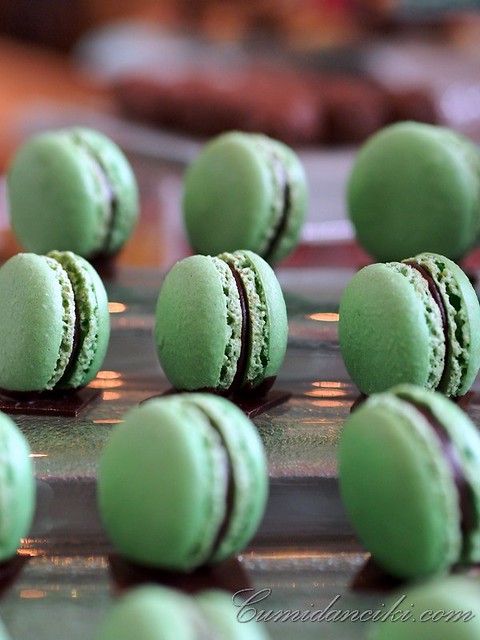 Like all models within the current digital PEN line-up the EP-3 takes its inspiration from the original Olympus PEN film cameras of the 1960s and 70s. The classic retro styling is certainly a head turner and will definitely accessorize whatever fashion you sashay with. If you prefer to be a stealth photographer, then choose the black color. The silver one just screams look at me plus its a bright shiny metal in the sun.

Ciki shares her view on the EP-3… 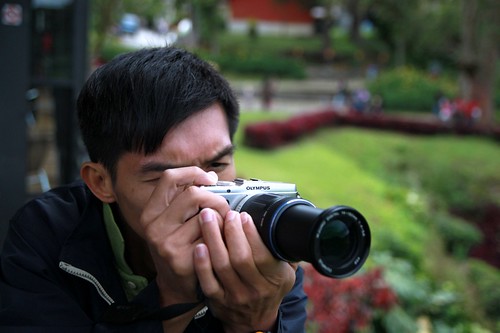 2. Less Cumbersome than the DLSR

It will satisfy someone who wants a camera that can take relatively straight forward photos that look great and don’t need the power of a full fledged DSLR. If these traits describe you, then chances are that the EP-3 is for you. 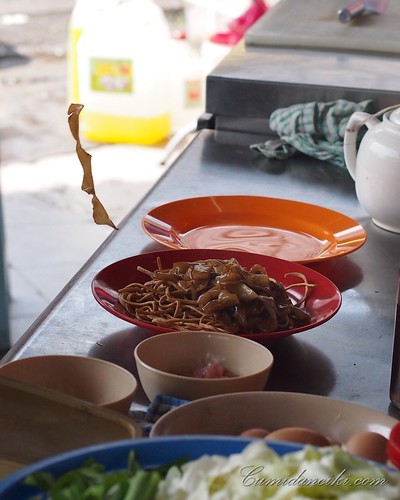 While the above image is captured by chance, it takes a good camera and fast lens (f1.8) to capture the fine details (note the flying noodle!)

The thing about the EP-3 that has taken it up a notch in performance is an all new sensor powered by a zippy dual-core Truepic VI processor. The 12-megapixel count is the same as the previous generation camera, but we all know resolution isn’t everything. If you purchase the EP-3 with an all new 12mm F/2 Prime lens, then this will take advantage of that new sensor, and deliver some images that puts Micro Four-Thirds in the same conversation as an entry-level DSLR. 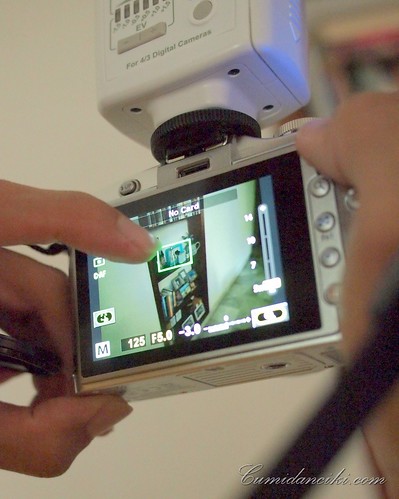 The touchscreen feature provides focusing capabilities, Live Guides (eg changing color saturation, brightness, image blur etc) and image controls (magnification, calendar view etc) when previewing. The touchscreen fast autofocus system is the fastest in industry currently and its a whole lot of fun especially when you want to capture candid moments.. stealthily. Just hold the camera up like you’re reviewing photos, touch the focus area as needed and you’ve captured a moment in all of its natural glory. You can even fine tune the focus frame with a slidebar on the right side of the screen. Olympus added in an anti fingerprint coating on the bright and sharp 614,000 dot Organic LED (OLED) so you won’t leave the screen all smudgy. 3 In-camera image stabilization mode improves image quality especially with our shaky hands. Because it’s built in, the image stabilization works on any type of lens attached. 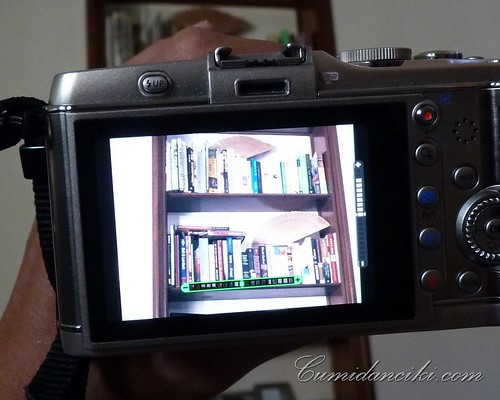 The Level Gauge mode is very helpful to frame a perfectly balanced camera or you could use it for carpentry work!

The EP3 captures movies at super high 1080i60 AVCHD format and can output the video for display via HDMI slot.

A wide choice of Movie and Still Compatible lenses available to provide fast focusing for still photography, and silent and smooth focusing for video capture. Better sound such as interviews or wind noise reduction can be achieved with the purchase of an external microphone SEMA-1 which attaches to the hot shoe mounting.

The EP3 comes with a built in flash that takes reasonably good photos in low light especially when you use slow sync and employ the help of a tripod. However, make sure that the zoom lens is retracted otherwise you will get a slight shadow at the bottom right corner of your screen. The flash works better with a non-zoom lens. The fill in flash works great with its less harsh exposures on subjects. We would have liked it better if Olympus kept the ability to pull back the flash for bounce light as what’s available in the EPL1.

You will definitely need an external flash to give you a muted and yet well exposed image. Olympus and Panasonic has several external flashes which is compatible with the EP3 but you can also try out the Nissin Di466. Other flashes might still work but without the TTL function (automated meter sync with the camera). You will then need to manually adjust the strength of flash. 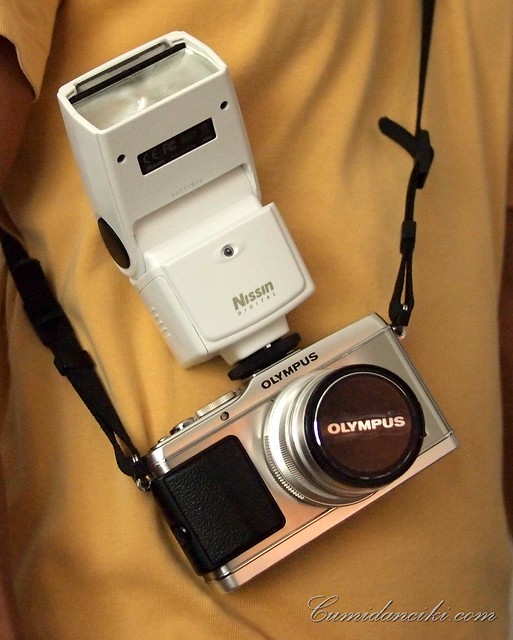 With its grip removed, the EP-3 is totally minimalistic looking but guys might have a problem with not having a good grip on the camera. Me, being a chick, I love the retro-inspired, all-metal build that feels dare I say it.. almost Leica-esque! Knobs, buttons and dials add weight to the camera but having said that, it’s not really a burden to carry. It is by no means, as heavy as a DSLR.

Olympus also has 10 art filters on the EP-3 They are as cool as the i-phone’s Instagram and Hipstamatic effects but you can get instant gratification if you shoot in the art filter mode. You don’t need to do any post production. Creative Art filters go beyond your traditional sepia mode, vivid mode, etc. You have some fascinating filters such as Pin Hole, Grainy film (noisy BW filter), Dramatic Tone (adding mood to the sky), Diorama (simulates tilt-shift lens photography), among others. Each of these Art filters has options to further add tweaks. 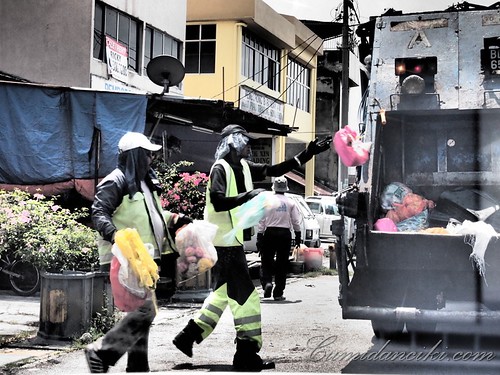 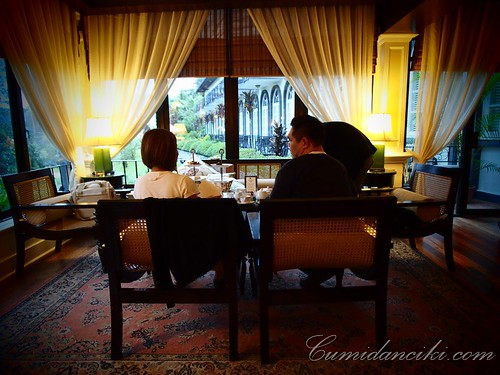 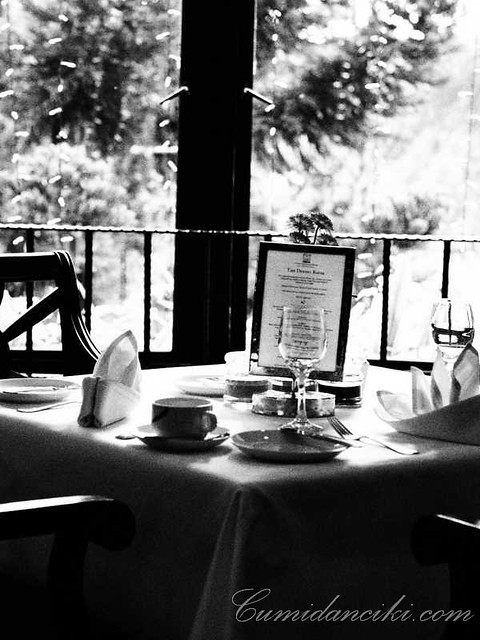 Future improvement we would like to see on PEN systems

1. In-camera view finder
A built-in viewfinder should be the next step for Olympus to draw-in more consumers to the PEN system. Although an electronic viewfinder can be purchased, having one already pre-built gives the photographer more freedom to compose his art and leave the hot-shoe for other accessories.

2. In-camera external microphone jack
Another little tweak which would draw more PEN consumers. Since the camera is able to shoot high definition video and with an assortment of new M.Zuiko movie and still camera lenses already available, an external microphone input provides budding directors to improve sound quality on the videos and just as above, frees the hot-shoe for other accessories.

3.Improved Menu Experience
As far as the camera itself goes, the settings menus can be a bit perplexing to access.

In Conclusion..
The great thing about the PEN, is that it is made to be small, light, convenient, inexpensive compared to DSLRs and competent. This is still an ideal camera for someone who wants quality shots, but are still not ready to cross the DSLR threshold. Olympus provides robust features for advanced photographers and budding photographers wanting more manual control but without having to lug around heavy equipment. Amateur photographers are not left out with the Intelligent Auto and Scene mode.

Should you buy a PEN too? Well, that’s entirely up to you.. and besides.. there’s just so many to choose from!

Kuala Lumpur has no shortage of Japanese food options, but how do you avoid those crappy california rolls and find yourself a truly exquisite…