One cannot help but be charmed by the weaves of narrow cobble stoned roads, spires and picturesque landscapes, that together, balance a modern city with an old world charm and historic presence. Impressive medieval architecture, panoramic vistas, quaint little shops and interesting restaurants, make Edinburgh an awesome city to visit, and I was pretty excited about exploring all its nooks and crannies, immediately, given what little time we had. 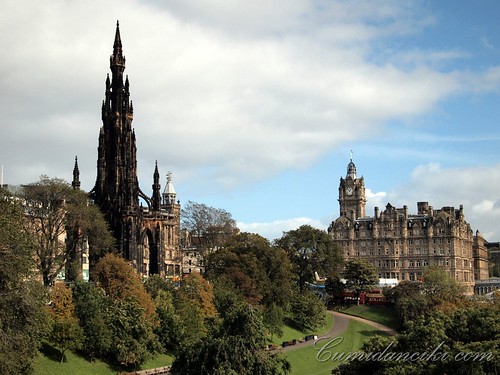 Stunning view of the Scott Monument (left) -in honour of author Sir Walter Scott,the Wizard of the North

Edinburgh is the capital city of Scotland, the second largest city in Scotland, and the seventh-most populous in the United Kingdom. A UNESCO City of Literature (as well as a World Heritage site) Edinburgh has been home to Sir Walter Scott, Sir Arthur Conan Doyle and Robert Louis Stevenson and continues to provide inspiration to contemporary writers like Ian Rankin, Alexander McCall Smith and JK Rowling. This is the city where the first and the last words of the Harry Potter chronicles were penned. A tiny church in the village of Rosslyn was made famous by ‘The Da Vinci Code’ by Dan Brown. This is a city where literature is a driving force and why visitors from all over the world, like nothing better than to attend the annual Book Festival of Charlotte Square. 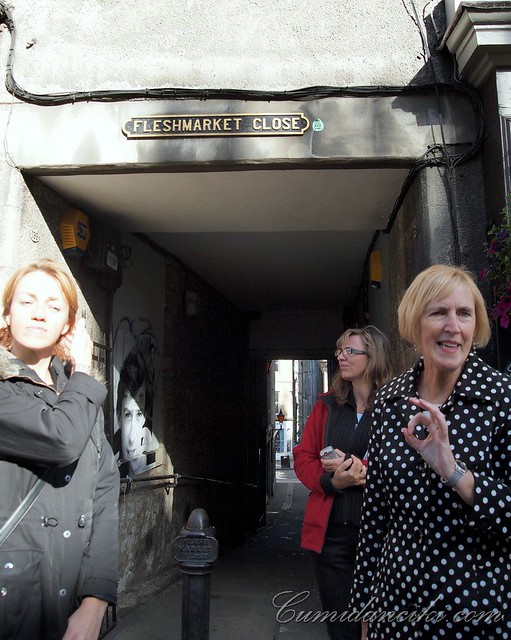 Exploring Edinburgh City on foot, with Lin Anderson and Alison. Fleshmarket Close, the setting for one of Ian Rankin’s most famous Inspector Rebus novels

On the first day in Edinburgh, we were introduced to its most famous strip. The Royal Mile. The Royal Mile is a succession of streets that run through the Old Town of the city of Edinburgh in Scotland. As the name suggests, the Royal Mile is approximately one Scots mile long and runs from Edinburgh Castle at the top of the Castle Rock down to Holyrood Abbey. The streets which make up the Royal Mile are Castle Esplanade, Castlehill, Lawnmarket, High Street, Canongate and Abbey Strand. The Royal Mile is Edinburgh Old Town’s busiest tourist street and by 11am, we saw tons of people milling about, busy snapping photos. It was pretty overwhelming and we were glad we got an early start. 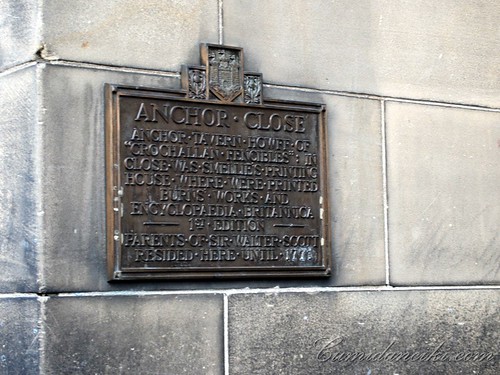 Anchor Close – that goes towards Cockburn Street from the Royal Mile

First we met up with Lin Anderson, famous author and screenwriter of Edinburgh. Lin was born in Greenock, Scotland and is a crime novelist and screenwriter, best known as the creator of forensic scientist Rhona MacLeod. The Rhona MacLeod books are currently being developed for TV as well. Together with another lovely lady called Alison, Lin took us on a guided tour of the Royal Mile. 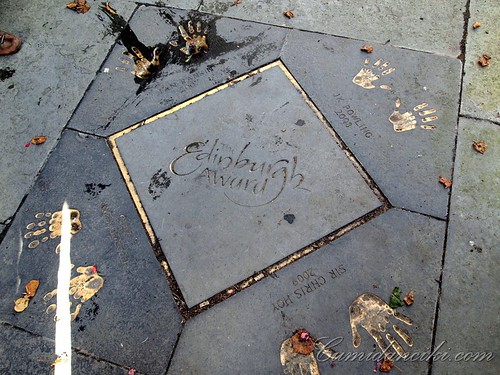 The Royal Mile is at the heart of Edinburgh’s Old Town, with Edinburgh Castle at its head and the Palace of Holyroodhouse at its foot. Its name comes from its tradition as a processional route for kings and queens for the last 500 years. The Royal Mile has retained many historic buildings to visit, Gladstone’s Land, the Writers’ Museum, Mary King’s Close, the John Knox House and the Museum of Edinburgh. To get a real taste of the past though, you need to explore the many closes and the narrow passageways that line the Royal Mile. Here in places like Riddle’s Court, Tweedale Court, Bakehouse Close and Dunbar’s Close you will feel transported back to the old city. 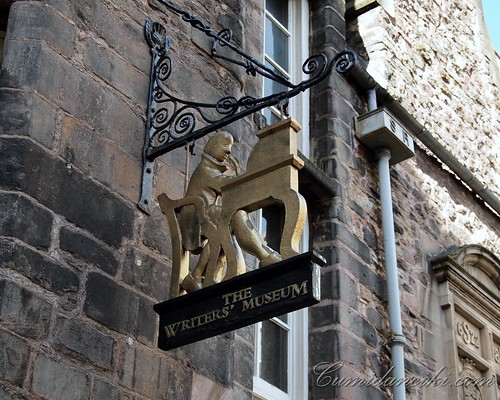 At the top of the Royal Mile is the Lawnmarket. Walking further along, is Gladstone’s Land on the north side, the best surviving example of an Old Town tenement from the 1600s. Further down lies High Street which runs from George IV Bridge to St Mary’s Street, the location of the Netherbow, and the limit of the pre-19th century burgh of Edinburgh. Anchor Close (connecting to Cockburn street) is an interesting route to take, because it is so narrow, you can stretch your hands out and touch each side as you descend the stairs! 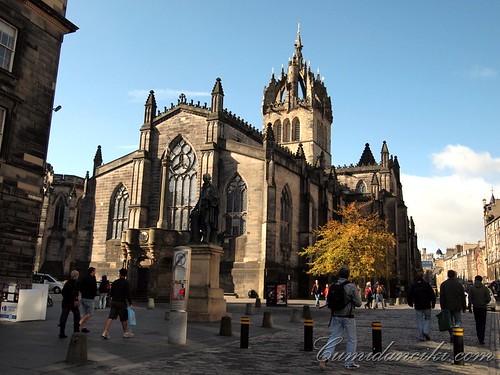 St Giles’ Cathedral, also known as the High Kirk of Edinburgh, is the historic City Church of Edinburgh. With its famed crown spire it stands on the Royal Mile between Edinburgh Castle and the Palace of Holyroodhouse

On High Street is also the eye catching St Giles Cathedral, founded during the reign of King David I in the 1120s. Outside the cathedral is a heart shape in the pavement where the old Tolbooth stood. The Heart of Midlothian, a heart-shaped pattern built into the setted road, formerly the centre of administration, taxation and justice in the Burgh. From the point of its demolition, locals used to spit on the site of the prison (I was careful not to step there!) The prison had been described by Sir Walter Scott as the “Heart of Midlothian”, and soon after demolition it occurred to the city fathers to place a heart on the site. Parliament House, which is situated close to St Giles Cathedral, was the home of the Scottish Parliament from 1640 until its union with the English Parliament in 1707. At the time of the Union the parliament consisted of 314 members, of which 247 were aristocrats. 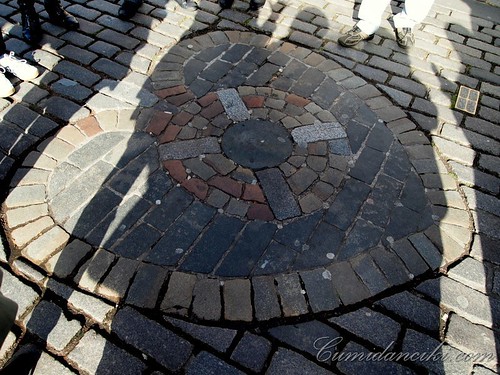 Incongruously located just to the west of St. Giles Kirk in Edinburgh is the Heart of Midlothian, which consists of a heart-shape set in the cobble-stones of the street

The crossing of St Mary’s Street and the Royal Mile marks the location of the Flodden Wall raised after the defeat of the Scots in the Battle of Flodden Field in 1513. East of the wall lay another burgh the Canongate, which refers to the canons of Holyrood Abbey. Today, at the bottom of the Royal Mile is the Scottish Parliament, designed by Enric Miralles. Abbey Strand ends the mile with the Palace of Holyroodhouse initiated by James IV in the 16th century and remodelled by Charles II in 1670. Close by is Holyrood Abbey, founded in 1128 by King David I. 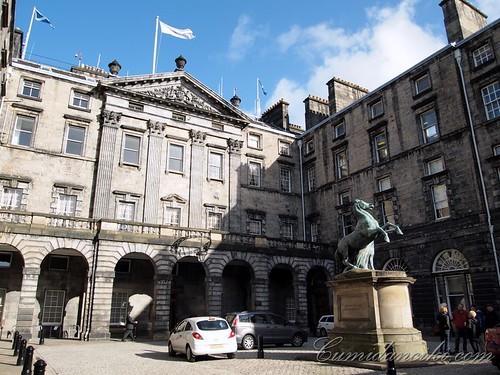 Parliament House in Edinburgh, Scotland, was home to the pre-Union Parliament of Scotland, and now houses the Supreme Courts of Scotland. It is located in the Old Town, just off Edinburgh’s High Street, beside St Giles Cathedral

All in all a great experience, and that we got to walk down the roads, touch the bricks and seats where these famous people once lived, sat and wrote was just such an awe-inspiring experience that words cannot describe. I will definitely be back one day soon, as Edinburgh requires much more time to explore and digest than what I got out of this short trip. I would love to spend at least a couple of weeks here, in the presence of great literary people of the past and present – who knows, I may even end up writing a book or two of my own, should inspiration find me;)

True sushi connoisseurs are to normal folk what shorn monks are to heathens. They eat their uncooked fish with a quiet, almost monastic reverence…