Every year at around this time, we celebrate MIGF, i.e. The Malaysia International Gourmet Festival in Kuala Lumpur. The MIGF has been around since year 2001. In the beginning, this festival was initiated in response to the industry’s need for a rejuvenation of the then, rather obscure fine dining scene. Though Malaysians have always enjoyed dining out, their overriding preference was for traditional restaurants and hawker food. However, today, Kuala Lumpur is very different and the appreciation for fine-dining has really taken off.

Chalet, the Swiss restaurant at Hotel Equatorial Kuala Lumpur is one of the participating restaurant of the Malaysia International Gourmet Festival (MIGF) 2011. They have been participating in this event for at least 10 years now. This year, Chalet’s theme is “Exquisitely Swiss”, and as they are renown for their authentic Swiss dishes, we were expecting something really terrific out of the restaurant. During this MIGF period, there will be many attractive packages up for grabs, if you dine at the participating outlets – at Chalet, you might stand to win a week-long dream trip to Switzerland valued at RM34,000! Not bad at all. We were invited to the preview of MIGF at Chalet recently, with special guests and sponsors of the night,  the Lufthansa MD and Swiss Ambassador officiating the dinner. 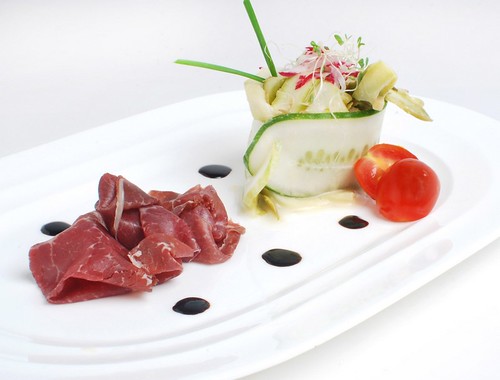 Bouquet of Green Asparagus Apple Balsamic dressing and Air-dried “Buendner” beef
To start off the night, we had a delicious starter of air dried Buendner beef, whose salty flesh was tempered by the sweetness of the green asparagus apple balsamic dressing. 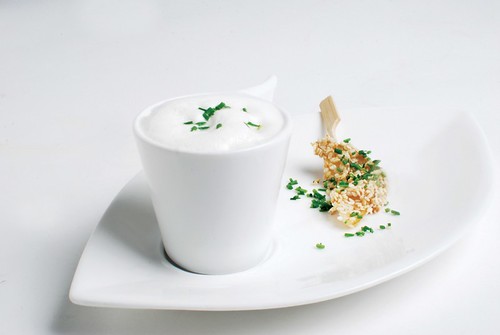 Cappuccino of Morels with Caramel Pear Skewer
Then came the soup dish. This creamy morel mushroom soup possessed an earthy deep flavor, and this went well with the lightly baked pear slices. The pear was rather nice, as it was served crunchy, wrapped in sesame seeds and caramel sugars. Again a lovely balance of sweet and salty flavours was evident. 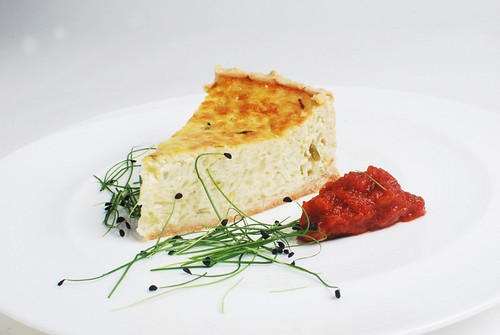 Onion Tart “Basel” with Tomato Coulis
We were then served a ‘quiche’ pie with a tomato pasta-like sauce. The tart had a creamy texture and was nicely savoury, which complemented the sweetness of tomato paste. 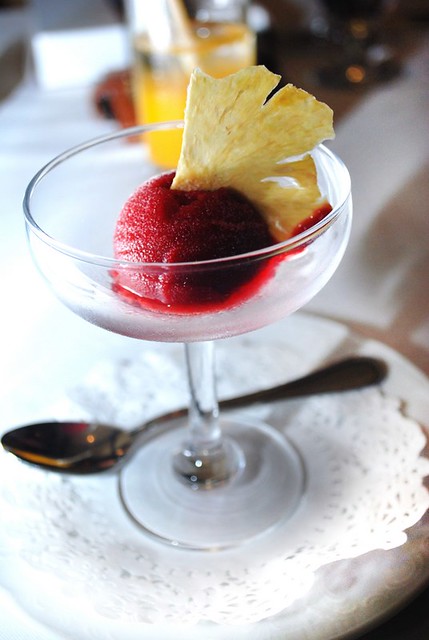 Sour Cherry Sorbet with Pineapple Crisp
The palate cleanser came in the form of a tarty cool cherry scoop, whose tanginess was unlocked with a sweet pineapple crisp. 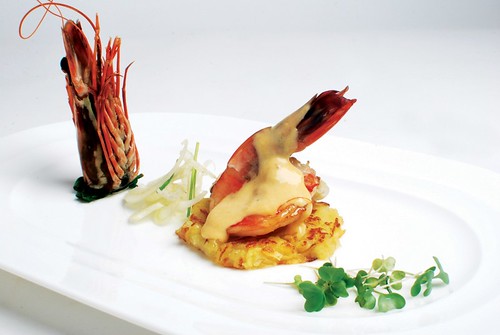 Pan fried Giant Prawns with Poire Williams-Vanilla Sabayon and Roesti Potatoes
A delightfully crunchy prawn cooked in a wine based sauce and served over baked potatoes. No complaints here. 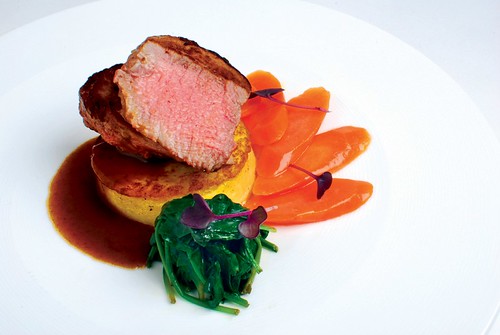 Sauteed milk-fed Veal Steak “Aargau”on Semolina Cake
The highlight of the dinner was the veal served medium, grilled and done in the style of Aargau. The meat was still moist, tender and tasty, doused with a wine based sauce and serve on top of a somewhat bland tasting semolina cake, which brought out and accentuated the meat flavors to perfection. 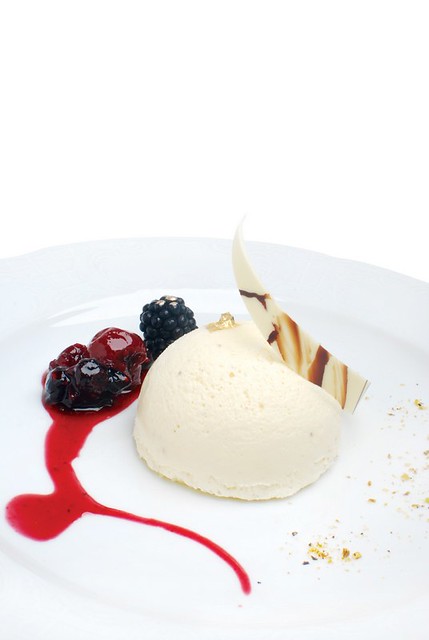 “Saanen” Mustard Ice-cream
As the grand finale, we were served a lovely timbale of ice-cream and fresh berries. A great end to the evening.

All in all this was a rather fresh and not to heavy menu from a quaint little swiss restaurant in Equatorial. The dishes were well balanced and my favourite of the night, was the veal. The wines served were mainly Chilean and Italian, reds and whites and in my opinion, they did not do the food justice. The selection of wines could have been improved, I thought.  At the dinner, I noticed a display showing a champagne bottle being opened with a sword. I actually wanted to do the trick if offered the opportunity.. but no such luck.

Speaking to Fritz Tschantre , the Guest Chef at Chalet this October for the period of MIGF, we found out that he hails from Aargau, a village in Switzerland. Chef Tschantre is married to a Malaysian Chinese. He informed us that he didn’t use any cheese in the dishes because he felt many Malaysian palates do not take to cheese flavors. We actually told him that now a days, many Malaysians love cheese. All the ingredients we dined on were fresh and specially flown in, except the local vegetables. The Morels mushrooms, which was a rather expensive item, were especially flown in just to create that particular soup dish. Veal is served medium in Aargau. However guest can request it done differently if they so choose. Chalet’s Chef de Cuisine, Hafizzul will also be around to show off his contemporary version of Swiss dishes. Diners will stand a chance to win a fabulous vacation to Switzerland for two persons. Check it out, at their website.

The Storyline: Esteban Espinosa (Ricardo Darin) is a master taxidermist and an epileptic who often speculates about committing the perfect crime. When his friend…