Another great place to visit if you’re ever in Glasgow, is its School of Art. It was founded in 1845 as the Glasgow Government School of Design, but in 1853, it changed its name to The Glasgow School of Art.  By the end of the 19th century Glasgow School of Art was one of the leading art academies in Europe and after early success in the fine arts, the late 1890s saw Glasgow’s reputation in architecture and the decorative arts really taking off. Which brings me to the person this post is centered around – at the very heart of this success was a talented young architect and designer, Charles Rennie Mackintosh whose reputation was to quickly spread beyond his native city and who, over a century later, is still regarded as the father of Glasgow Style. If you check out his photo at the end of this post, you will see that the guy really does look rather like a rebel;) Born in Glasgow on 7 June 1868, Mackintosh was apprenticed to a local architect John Hutchison, but in 1889 he transferred to the larger, more established city practice of Honeyman and Keppie.

When we entered the Glasgow School of Art, we noticed that it was in fact, still a working art school, not a museum, therefore, there were staff and students going about their daily work. After a quick intro by one of the student at the Mackintosh building, we were taken on a tour of the building that lasted about an hour. 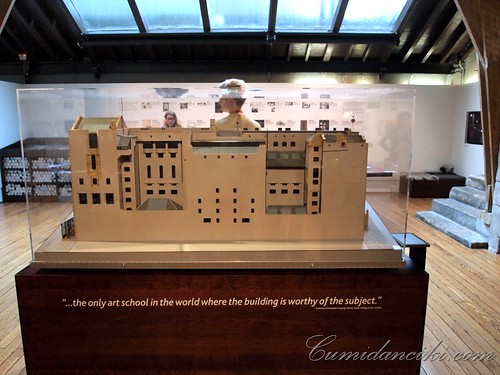 “.. the only art school in the world where the building is worthy of the subject”.. 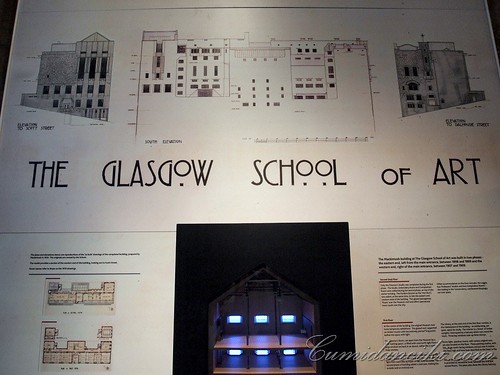 This place is so cool.. even the font you see above is copyrighted to Mackintosh / Glasgow School of Art!

During the tour, our guide led us through the two phases of ‘Mackintosh’s Masterwork’, the Mackintosh building at the Glasgow School of Art.  Inside, we witnessed the maturing of Mackintosh’s unique architectural style, identified elements of Japanese architecture combined with Scotland’s own baronial tradition, and learned about the ethics of both Arts & Crafts and Art Nouveau movements.  Throughout the tour, we saw Mackintosh’s original tile and iron work, stained glass, furniture and artwork in some of his most famous and celebrated interiors, including the Library and the newly opened Furniture Gallery. 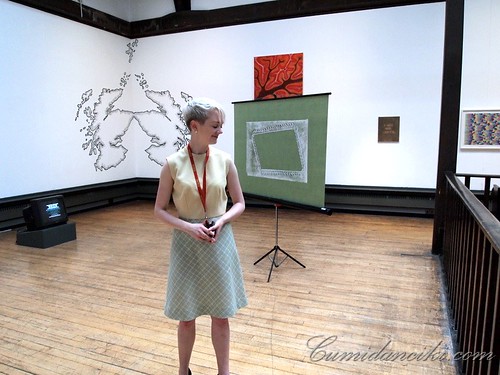 the tour guide leads us upstairs to an art exhibition space 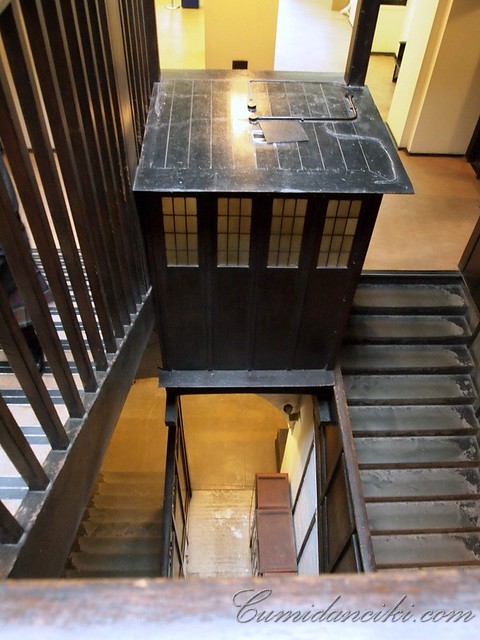 As we go up the stairs, we pass this Japanese inspired lantern-looking lift, which looks like it’s floating up the stairs when it’s dark. The funny thing is, we were told that Mackintosh had never been to Japan. So, why the Japanese influence, nobody can quite say.. 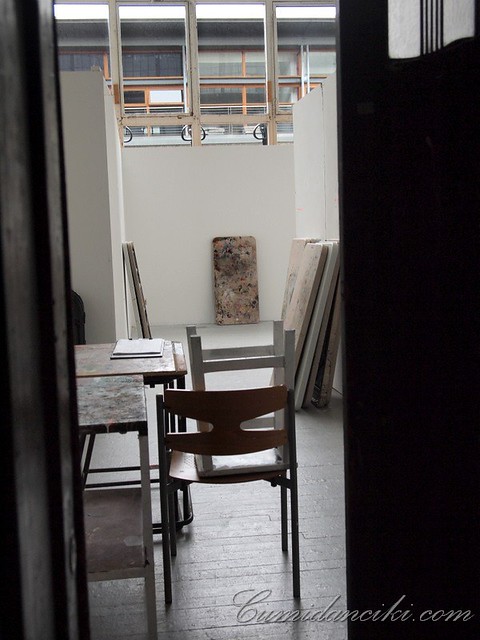 The building massing and facades reflect its context richly. The north side, facing the major street, presents a simple, horizontal rectangular mass with large, industrial windows which light the studios, alternating with masonry piers. This facade is set behind a stone and iron railing, interrupted at the center with an art nouveau iron arch under which steps lead up to the asymmetric entrance. 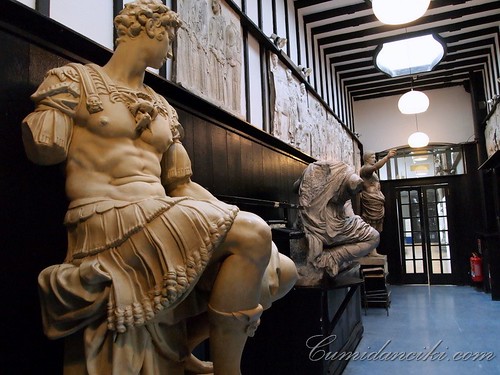 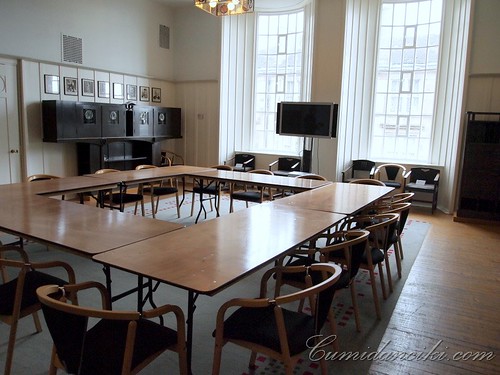 One of the Mackintosh meeting rooms

Check out the chairs and their funky design. Every piece of furniture you see in this room is modern looking and the huge windows let in tons of natural light. Another quirky thing we were told to look out for, was the “moustache” in all the designs around the school – check out the design above the fireplace. They were nicknamed “Mackintosh’s Moustache”! (See final photo below for resemblance!) 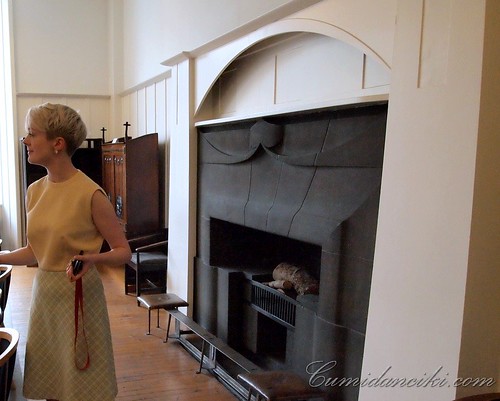 The moustache design above the fireplace.. 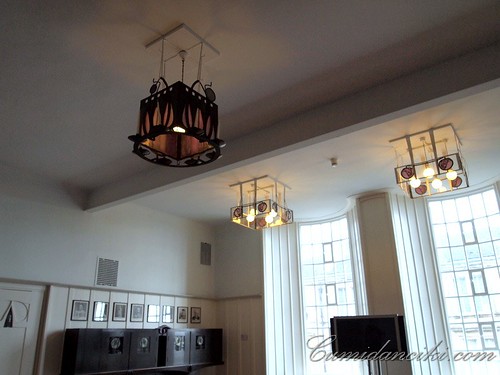 In contrast the east and west facades are narrow, tower-like masonry walls above the steeply sloping streets, into which small paned metal windows recall Scottish baronial architecture. The museum skylight and the “hen run”, a glazed gallery connecting fourth floor studios are just two elements of the lively composition of the stuccoed walls. The interiors were designed with equal emphasis in collaboration with Margaret Macdonald. Art nouveau floral and geometric motifs bring scale and color to the rooms in details of mantle-pieces, lighting fixtures, carpets, furniture, and crockery. 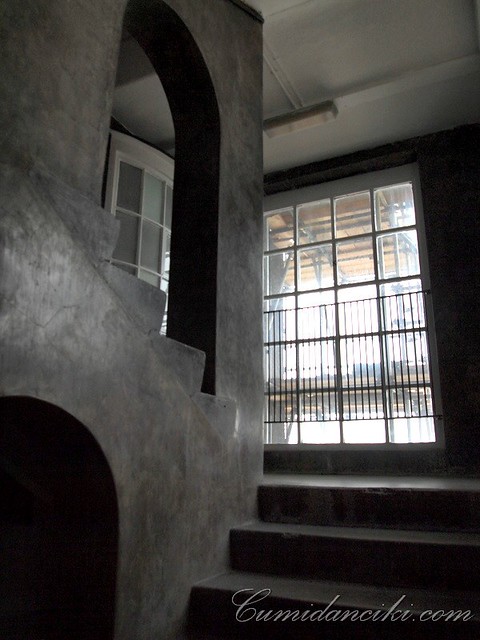 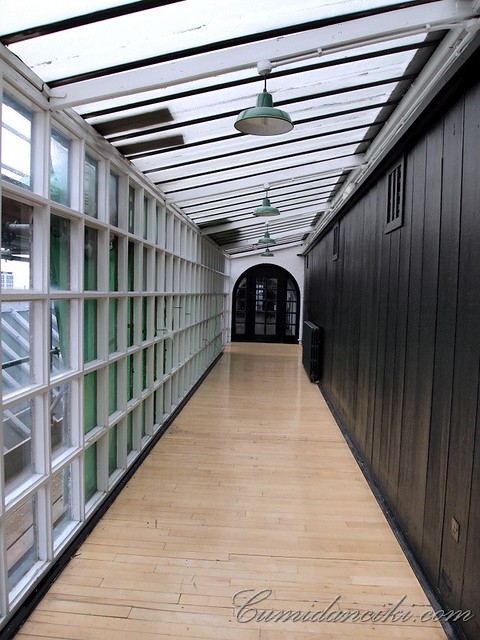 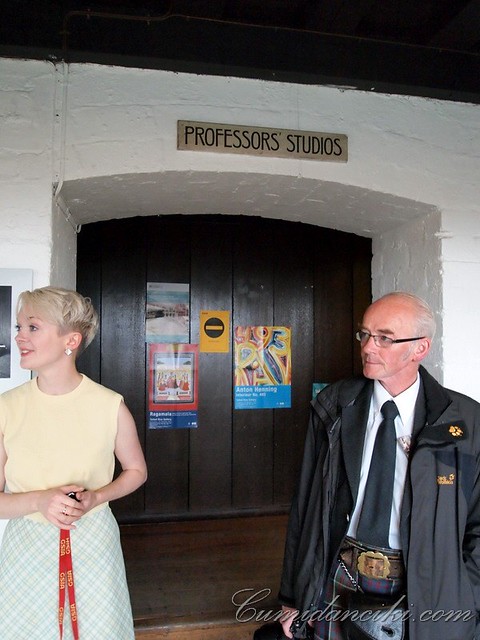 The library was redesigned and built later in 1906, a two story volume with a mezzanine overlooking the first floor. A darkly finished wood structure supports the mezzanine and ceiling. The pendant light fixtures, glass book cases, carved balusters, chairs and work tables are all designed with art nouveau motifs, polychrome paint and metal details. 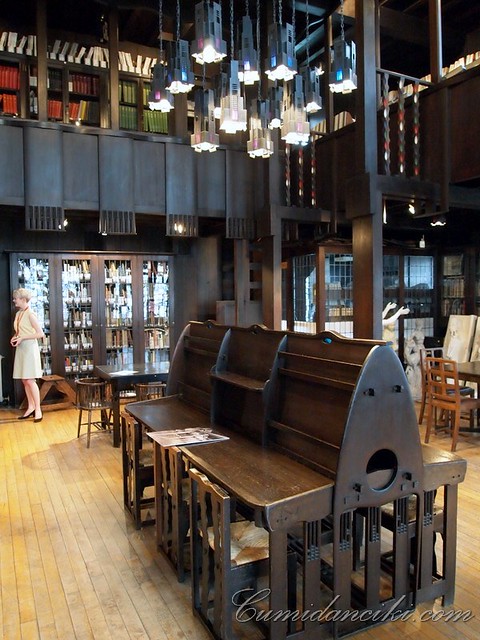 the library,  a two story volume with a mezzanine overlooking the first floor 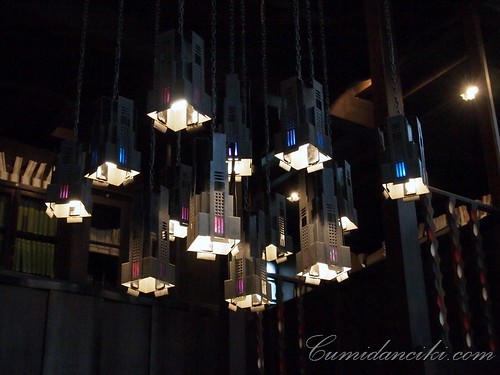 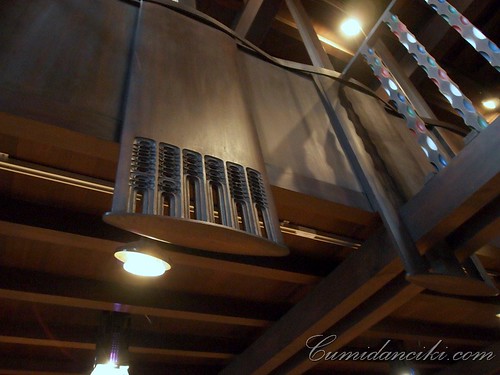 These designs that hang from the second floor are suppose to mimic leaves.. and none two are alike (the carvings are all by hand) 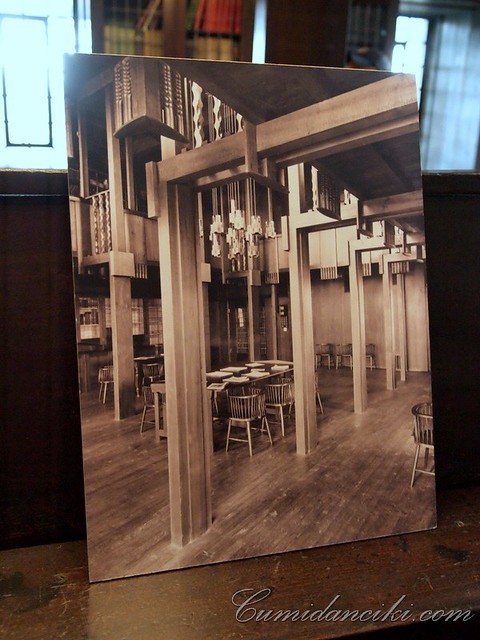 In a career of only twenty-five years, Charles Rennie Mackintosh designed well over 300 pieces of furniture, the majority in two relatively short periods, 1897-1905 and 1916-1919. The range of works are quite remarkable, featuring not only the elongated chairs for which Mackintosh is most remembered, but also tables, bookcases, beds, bathroom fittings, and even a pulpit and an organ. The pieces range stylistically from the more routine late-Victorian pieces of his earliest period, through the white-painted OEpook School furniture of 1901-03, to the geometrical severity of Mackintosh’s work for W.J. Bassett-Lowke in 1916-19. Mackintosh is a designer whose influence has only recently begun to fully realize itself, and it is a must for both students and aficionados of design to visit this place and see the collection! 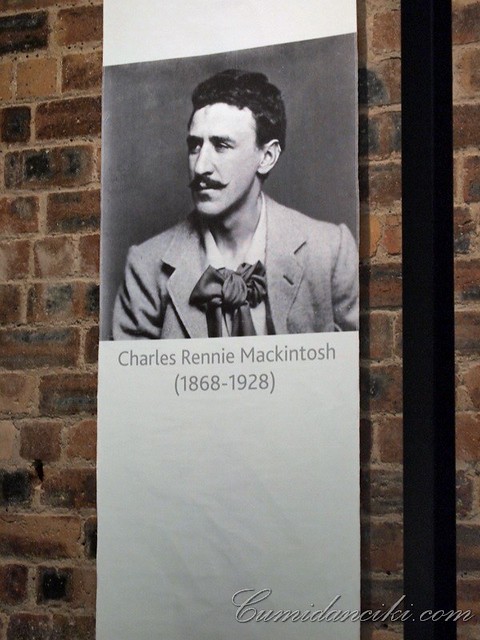 the man himself.. and it is true.. what a handsome moustache! 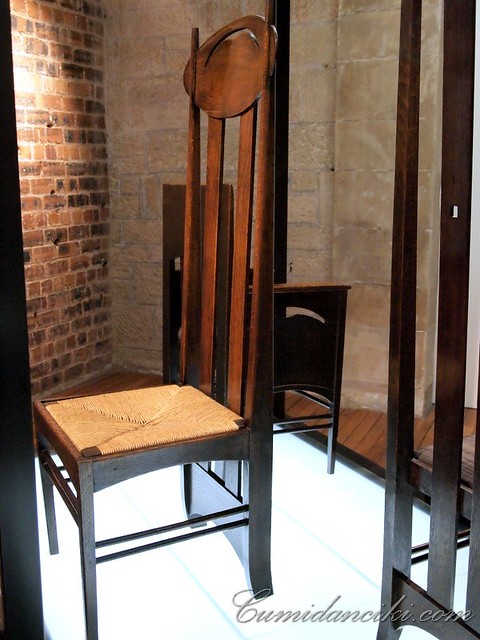 the famous high back chairs of Mackintosh – The Argyle Chair 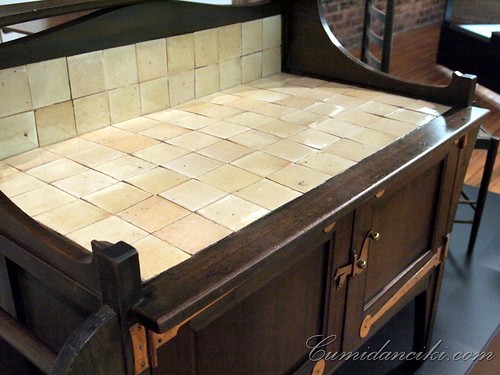 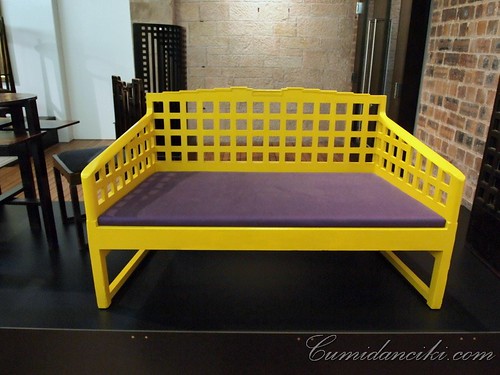 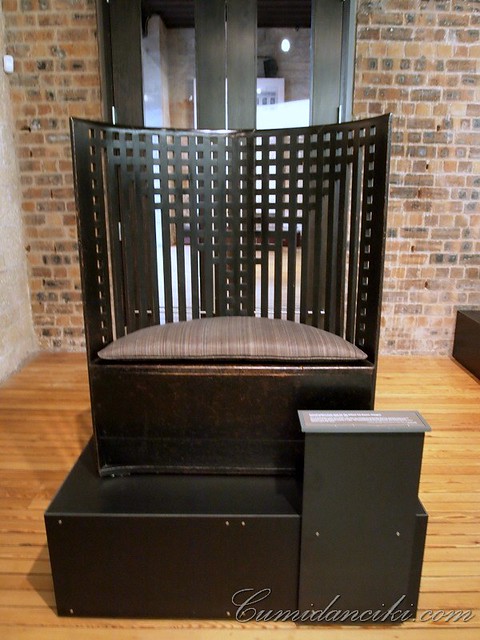 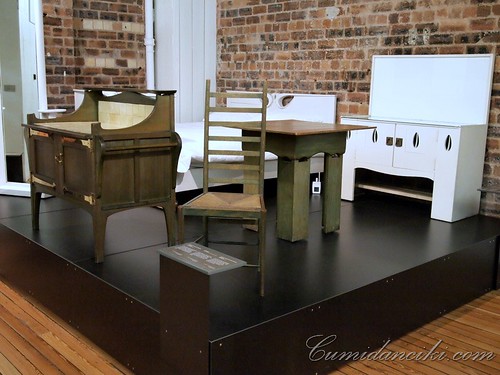 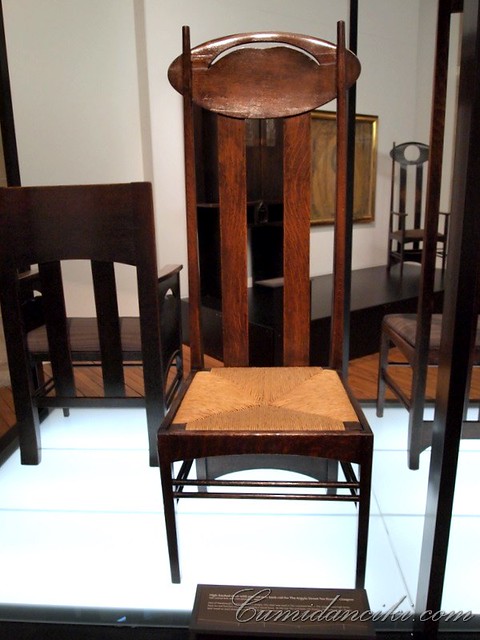 The Argyle Chair is made after Mackintosh’s design for a dining chair in the Luncheon Room of the Argyle Street Tea Rooms in Glasgow circa 1897. This Mackintosh Chair is a very rare example of Mackintosh Furniture. Hand crafted in the finest oak and using sea grass for the seat pads very few have been produced.

Cumi recently picked up a relatively flat looking packet of Kimchi at the The Malaysia Food and Beverage Fair at KL Convention Center. It…