So did you figure it out – did you figure out where Cumi & Ciki were, and why the Backgammon ? Well, we were actually about to have dinner at Al-Amar Express, a great place for Lebanese food. Backgammon comes from the Ottoman empire influence, just like the chawarma and the shisha. The Ottomans, through two great Druze feudal families, the Maans and the Shihabs, ruled Lebanon until the middle of the nineteenth century. The Lebanese adopted the game Backgammon and it was common practice to take part in leisurely activities like playing cards or backgammon and smoking the hookah (or shisha). The cuisine of the Ottoman Empire was partially made up of what had become, by then a “rich” Arab cuisine.

In Lebanon, the traditional menu is made of a selection of small hot and cold dishes that the diners share as appetisers. These dishes are called mezze. Like all mediterranean countries they use a lot of olive oil and tomatoes in their cuisine. In Lebanon, it is not uncommon to find a wide range of vegetarian dishes in their daily meals. This makes Lebanese cuisine a lot more healthy than people think. 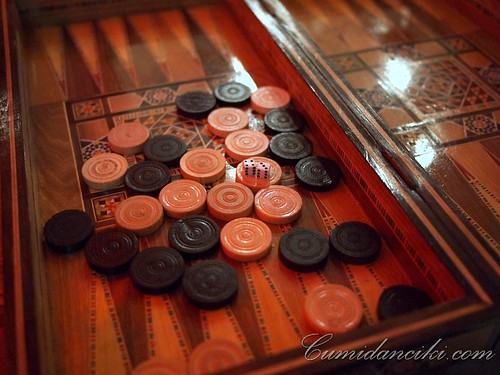 Similar to the tapas of Spain and antipasto of Italy, mezze is an array of small dishes placed before the guests creating an array of colors, flavors, textures and aromas. Mezze may be as simple as pickled vegetables or raw vegetables, hummus, baba ghanouj and bread, or it may become an entire meal consisting of grilled marinated seafood, skewered meats, a variety of cooked and raw salads and an arrangement of desserts.

A typical Mezze will consist of an elaborate variety of hot and cold dishes and may include salads such as the Tabouleh and Fattoush, together with dip such as Hummus, Baba ghanoush or Moutabal, Kebbeh, some patties such as the Sambusac and stuffed grape leaves. The Lebanese flat bread is a staple to every Lebanese meal and can be used to replace the fork. Just mop up the dips with your piece of flat bread and that’s it. Throw away the fork! 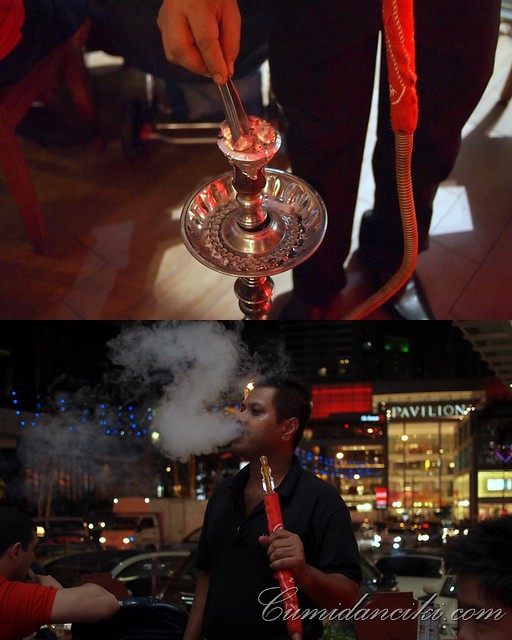 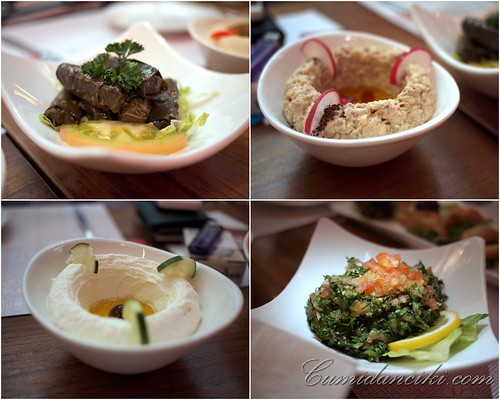 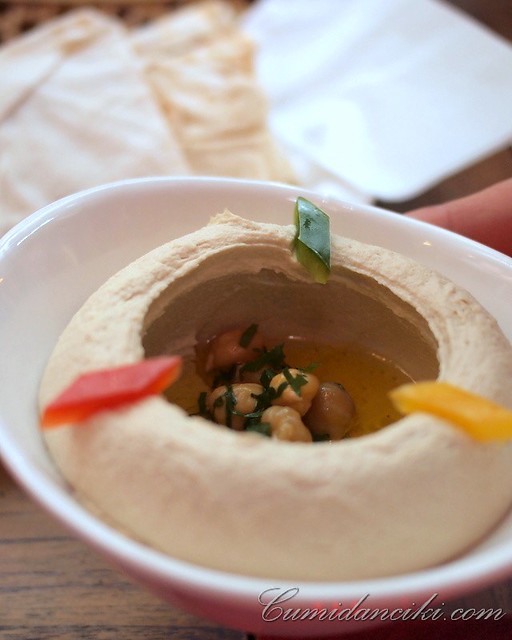 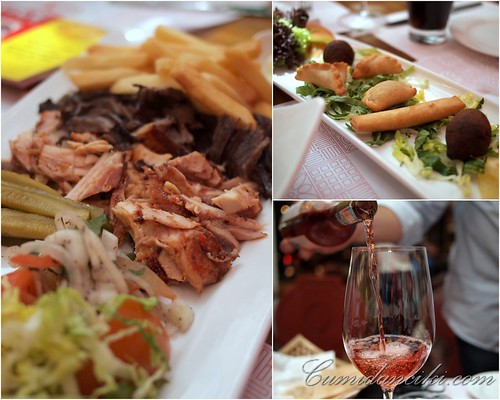 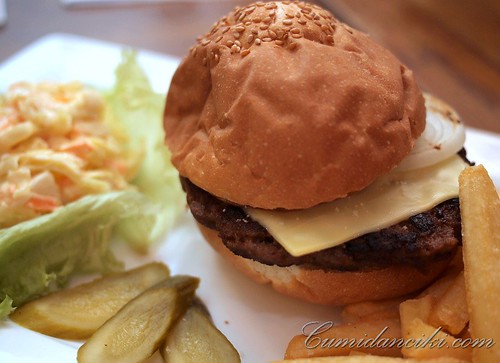 Al-Amar Burger – a super tasty, chargrilled beef patty with melted cheddar cheese, tomato, pickles and onions burger, served with fries by the side

Enter Joseph Sabeh Afaki, the owner of the restaurant. He showed us the right way of eating this burger which was to stick fries in between the burger and beef patty, slather them generously with some signature garlic dip and then take a nice, big bite out of it. The burger tastes awesome – now that’s a burger! 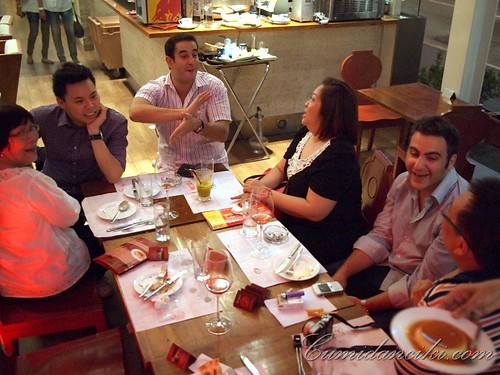 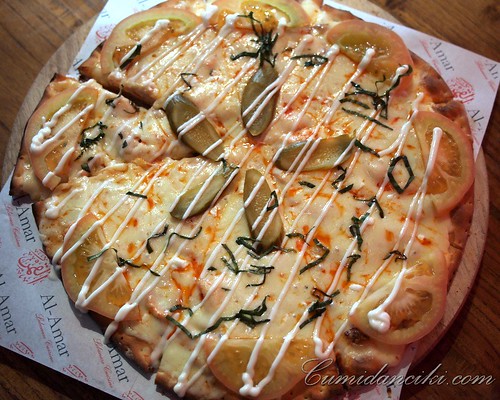 Lebanese Pizzas – which are called Manakeesh 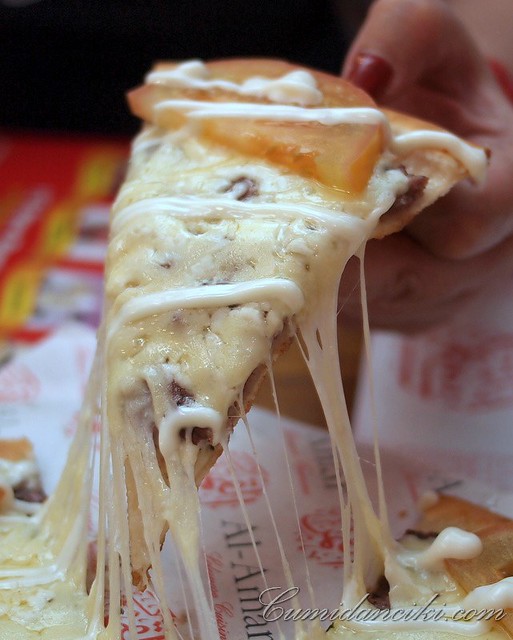 We had two different pizzas but my favourite was the Spicy Chicken and Kafta manakeesh which was spicy and completely coated in a rich Lebanese cheese, tomatoes, and topped with pickles. Fabulous. 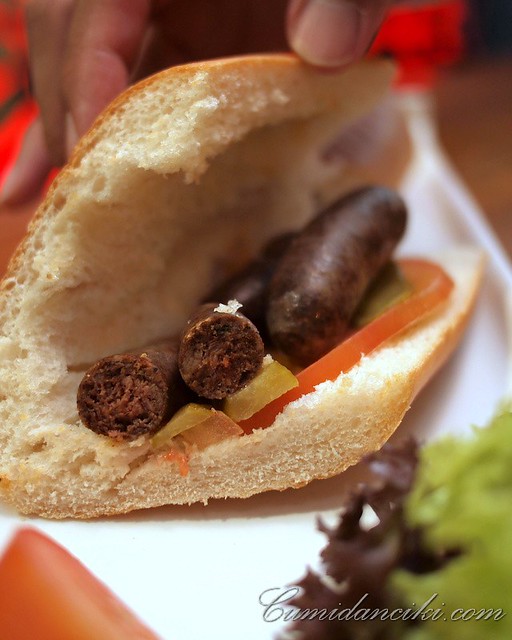 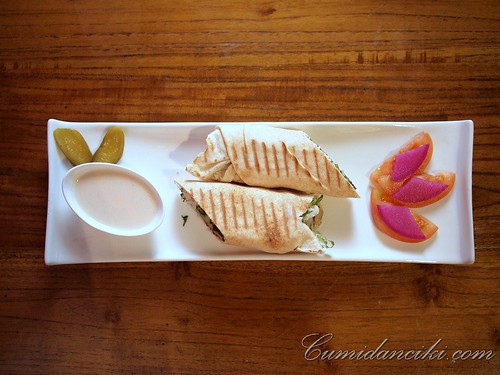 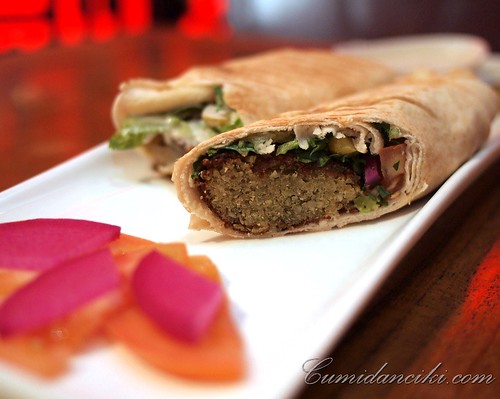 One of my favourites for the night was the Falafel. I loved the texture of the fried beans and the aroma of the chickpea paste, parsley and sesame seed paste all rolled into one was just heavenly. If you have to skip the meats,  then the falafel is the ideal snack. 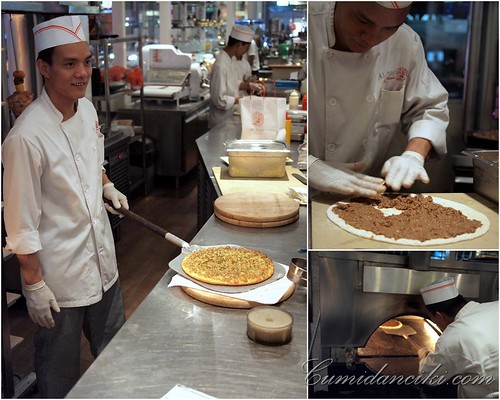 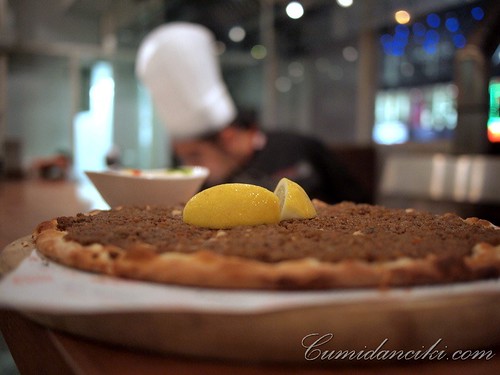 Pizzas galore.. and they send it over piping hot and good to eat! 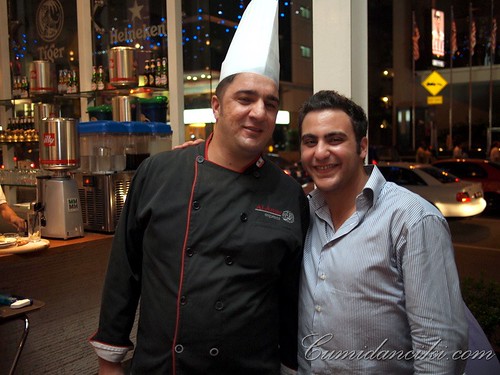 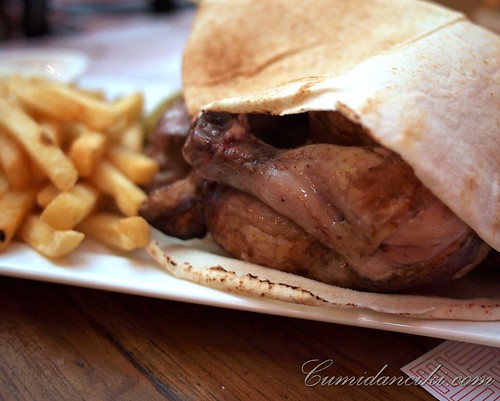 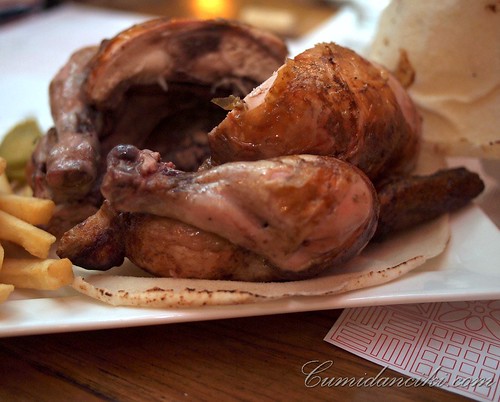 Apparently this roast chicken is a big hit with the Chinese clientele at Al-Amar, and I totally agree that it tastes great. Succulent and moist, this is one tasty bird;) 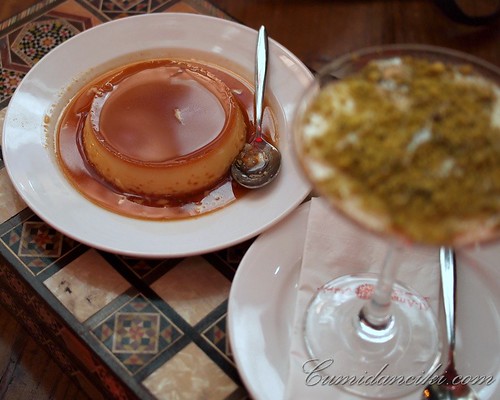 Although simple fresh fruits are often served towards the end of a Lebanese meal, there is also dessert, such as Baklava, and coffee. Although Baklava is the most internationally known dessert, Lebanese sweets have got a lot more to offer. 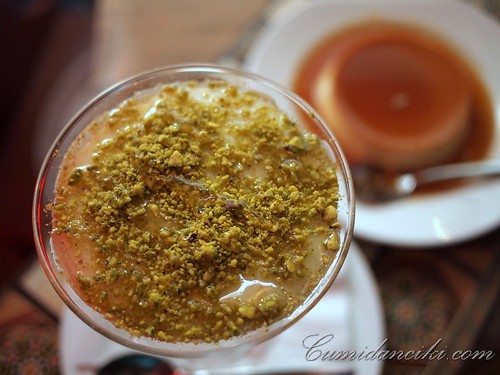 Ashtalieh is a cream pudding. It comes from ashta, which is the Arabic word for cream. Simply add a handful of crushed pistachios and serve – one really needs to savor its creamy sweetness at the end of a good dinner.. perfect! The Creme Caramel was good too, but not as good as the Ashtalieh! 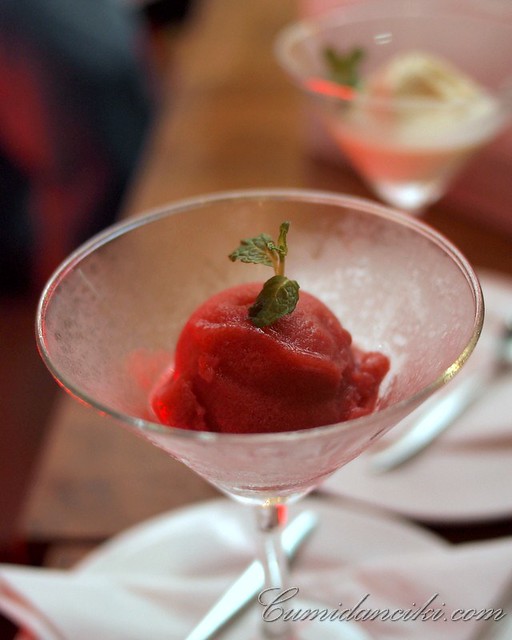 Lebanese ice-cream and sorbet , Pistachio and Vanilla ice cream and strawberry sorbet. My favourite was the Vanilla ice-cream which had such a strong Vanilla flavour it darn near knocked my socks off. Very good indeed.

You will need to pay close attention to this blog… Are you? OK.. what you will soon see.. are photos of my Favouritest most…