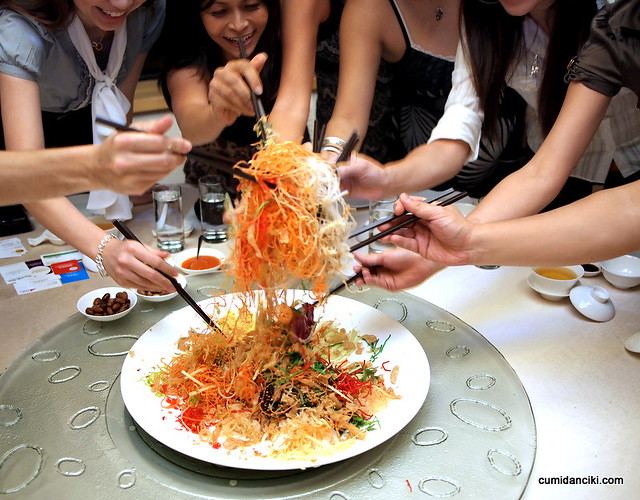 Chinese New Year is incomplete without a Yee Sang toss for good luck, prosperity, longevity, health and wealth. Yee Sang also known as lo hei (in Cantonese) is a Chinese raw fish salad. It usually consists of strips of raw fish, mixed with shredded vegetables and a variety of sauces and condiments, among other ingredients. Yee Sang literally means “raw fish” but since fish can also mean abundance the word Yee Sang is used to refer to prosperity and all things good, for the Chinese New Year. Partaking in the Yee Sang means, that expected promotion, that new car, or closing that important deal, is just around the corner. To every fine Chinese man and woman, the Yee Sang symbolizes abundance, prosperity and vigor.

Part of the fun and madness of Yee Sang ritual is actually the noise and merry making that involves large chopsticks and people tossing and mixing the ingredients in the large, flat plate till the colors and raw fish are completely and thoroughly mixed. This is the one time, parents will not scold their children for playing with their food. In fact, the more you play with it and toss it, the better. Also, the louder you scream prosperity wishes the better. “Health Come!” “Money Come!” “Love and Good Fortune COME! “

Chinese New Year is of course of particular significance to me, because I am afterall, Chinese. Some people say I am a ‘banana’ (yellow outside, white inside) but no, really I am 100% Chinese!  A Chinese proverb states that all creations are reborn on New Year’s day. The Chinese New Year is a celebration of change – out with the old and in with the new. The Chinese New Year falls on a different date each year because it is based on a combination of lunar and solar movements. It usually occurs in January or February. New Year’s Eve and New Year’s Day are celebrated as a family affair, a time of reunion and thanksgiving. The New Year’s Eve dinner a.k.a the Reunion Dinner, is the most important where the entire family no matter how geographically scattered, exodus back to their hometown, to gather and eat at the dinner table together.  Normally the wives, daughters and daughter-in-laws (basically all the women in the family) have to toil in the kitchen all day to prepare the sumptuous feast for the entire family. This is also a time for honoring the spirits of the ancestors but our family does not practice this, as we are all third generation Christians. Anyway, I love Chinese New Year because it is a time for loads of Feasting, Merry Making, Mahjong playing, collecting or giving Angpows and most importantly, I love if for the fact that family unity is at its strongest during this festive season. (Yes, especially when you are taking money from your elders at the Mahjong table!) 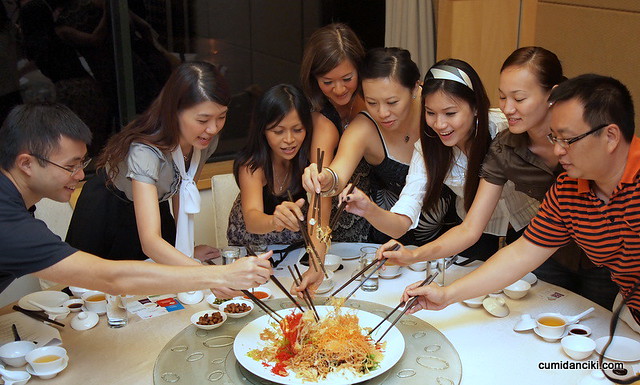 OK, so now you know a bit more about me and the Chinese New Year celebrations in my country.. back to the feast at Zuan Yuan. The Yee Sang/Lo hei is not only something that is celebrated with family members but also with friends. 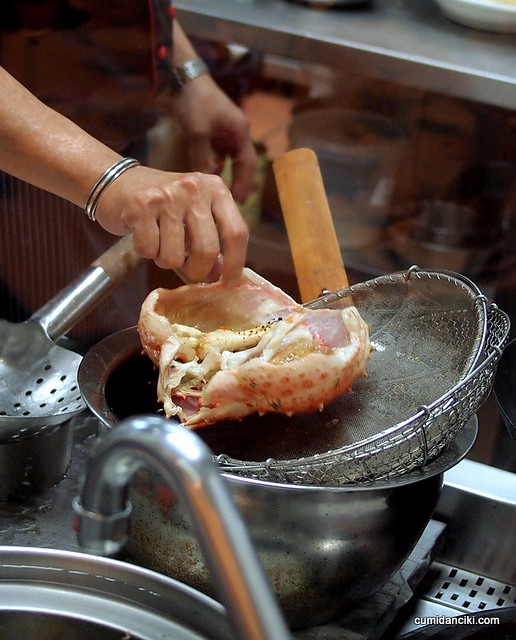 This year, my very first Yee Sang/ Lo Hei experience took place at One World Hotel’s Zuan Yuan Chinese Restaurant, thanks to the invitation from Florence and Crystal of One World Hotel, via the blogger Bangsarbabe. Dinner by the Executive Chef Michael Chew soon followed.. after the huge ruckus we cause, tossing the colorful salad. 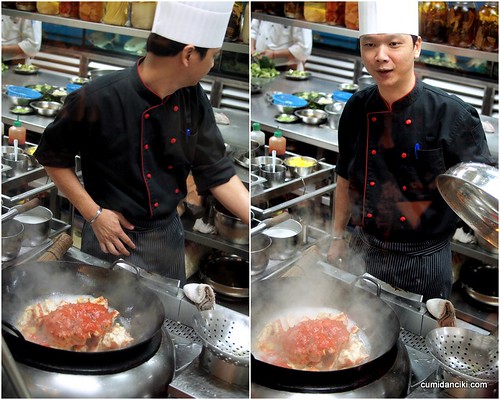 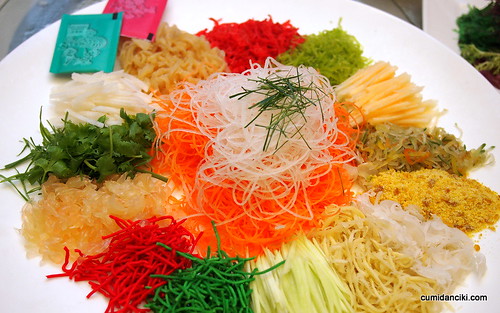 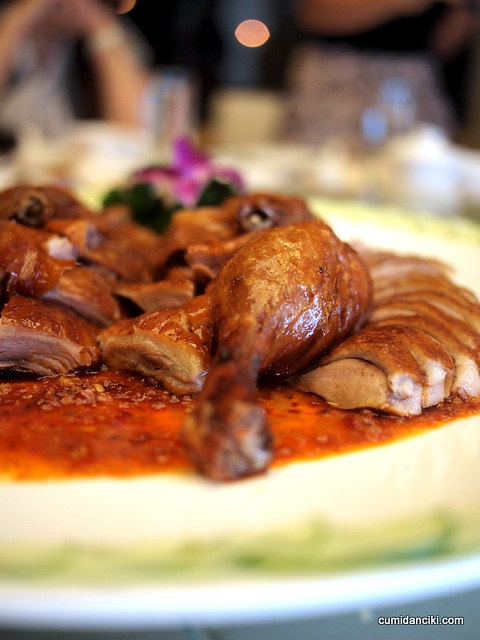 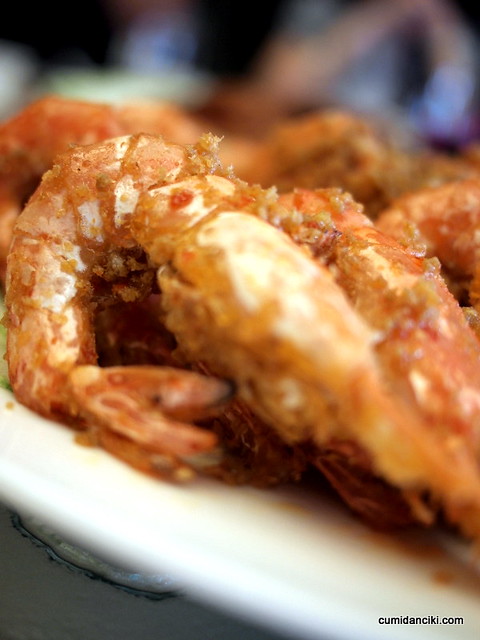 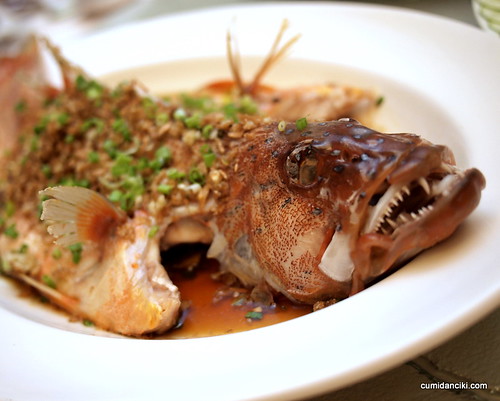 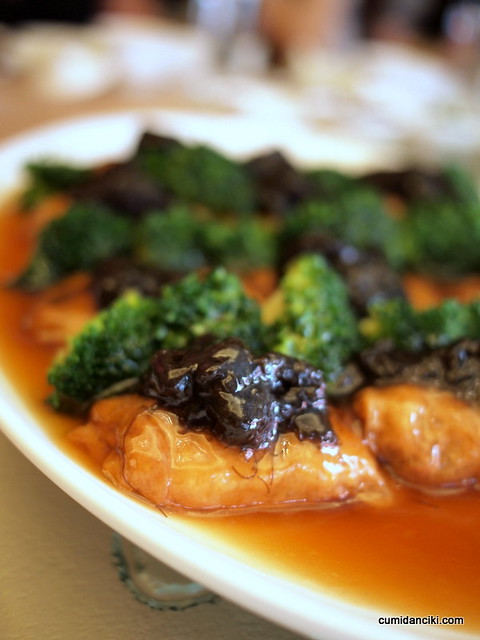 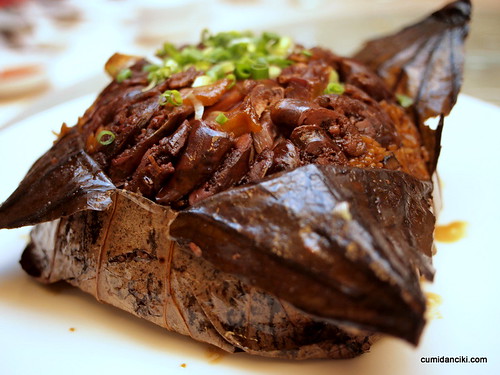 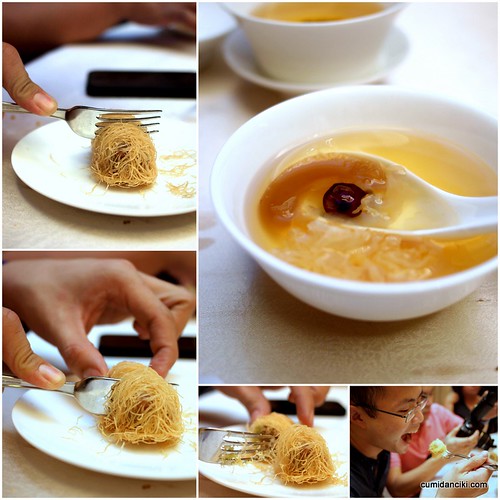 I have to say that all the food that we had that night at Zuan Yuan was fantastic. My favourites were the roast Duck, the succulent Prawns and the Lap Mei Fan. Everything was prepared to perfection and what you see is really what you get. I did however find the fish overcooked, so that was the least of my favourites. The desserts were light and refreshing. I particularly adored the Katafi Fillo filled with deep fried Avocado custard and homemade Niangao. The texture was crunchy outside yet chewy and gooey inside. Pretty contrasting textures and flavours, but it worked.

This year, One world Hotel is offering 3 sorts of Chinese New Year menus to their diners. Depending on your needs there is the Appreciation Set Menu, priced from RM888++ per table of 8-10pax, available from now until 31 January 2011. Add on 2 bottles of organic red or white wine for RM120++ and menus are available for lunch and dinner. There is also the Prosperity Yee Sang Menu of 4 different Yee Sang, with choice of Seaweed and Assorted Fresh Fruits, Salmon and Shredded Sweet Turnips, Chuka Hotate (scallops) and Jelly Fish or Sliced Abalone and Snow Pear. Priced at RM55++ per half portion and RM110++ per full portion. Available from 21 January 2011 onwards and also available for takeaway. Finally there is the Auspicious Lunar new Year Set consisting of a 3 set menus starting from RM988++ per table of 8-10pax. Available from 1 February to 20 February 2011.

Another one of my ex-colleagues has started up his own business in Ipoh. I am so proud of him! It’s called Happy Cones and…