I am over the moon!

One of my all time favourite fine dining restaurants has been voted 8th on the list of Top 20 restaurants, according to the Miele Guide 2010! I feel that they totally deserve this privilege to be ranked way up there amongst restaurants like the famous Iggy’s from Singapore because their food is superb and service outstanding. Here is a post describing why Cilantro is worthy of this accolade. Well done Cilantro! 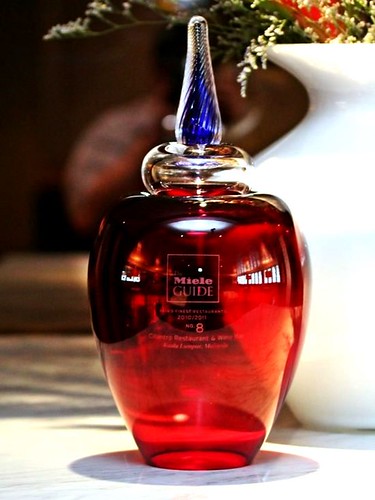 A word on the Miele Guide. It is a regional guide book to restaurants in Asia,  which ranks and showcases the top 20 restaurants in Asia, as well as categorises restaurants according to the city and country they are in. It is published by Singapore-based Ate Media, and officially sponsored by the German home appliance maker Miele. Other official partners include TIME Magazine, Visa Inc. and Hyatt Hotels. The guide does not accept advertising and none of the official partners have any influence on the multi-round judging process. In other words, getting this award, is a big deal. Hip hip Hurray!

Can you imagine.. Top 10 ya, not top 20!! Malaysia/Cilantro/fine-dining/a big deal/rave-worthy, can now all be stated in a single sentence with great pride. 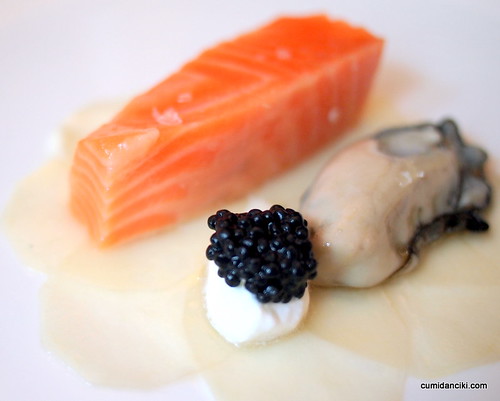 Like I have always said, and still maintain, Chef Takashi Kimura’s resulting dishes ultimately are a reflection of his prowess in taking a bit from each ingredient, throwing them together and then letting the flavours merge to wonderful, harmonious effect. Take for example our starter, the warm king salmon with poached oyster and avruga caviar. 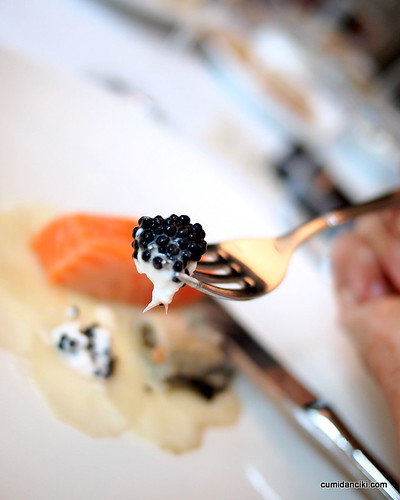 Which other restaurant could marry all the elements to such perfection? The shell-bearing molluscs – the oyster, the subtle creamy salmon, the salty explosive caviar and finally the smooth, slippery slices of potato. Screw it up and run the risk of drowning out an element all together. Not so at Cilantro. Each and every morsel has its place in this symphony of flavours. 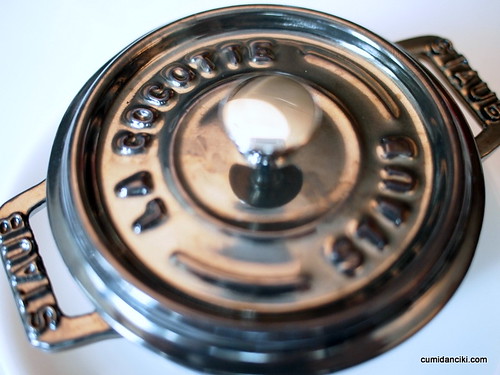 What lies beyond the 5 pound Titanium Staub mini cocotte? 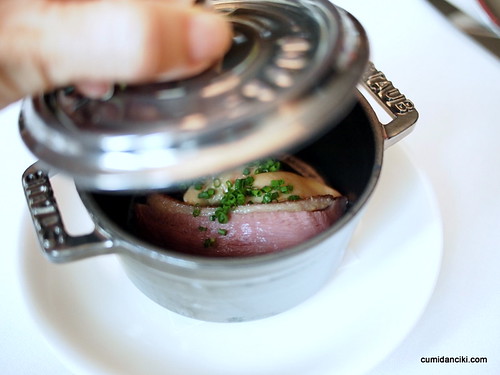 why the muscovy duck consomme with foie gras and chestnut mushrooms of course! 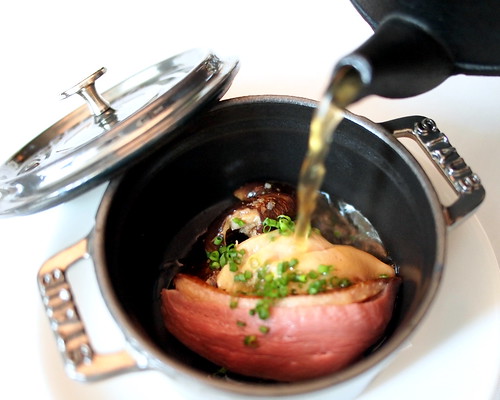 They add the soup last and you can sit back and marvel as it washes over the foie gras and sliced duck. The foie gras was delicious. Never had it coated in so little oil before and this new texture sensation on my tongue sent shivers down my spine. Less greasy  – I  really liked it this way. The duck on the other hand, was too tough and gamy. I felt that was somewhat of a dampener on what would otherwise have been a sensational dish. 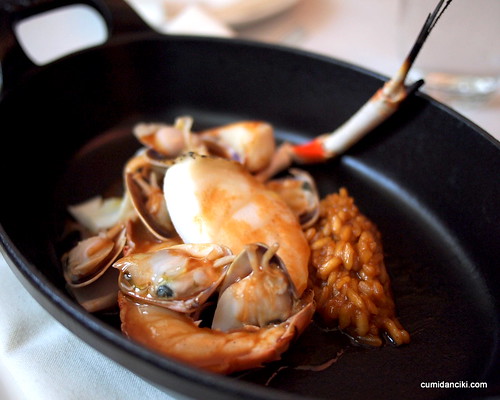 panache of seafood with saffron risotto and jus served on a cast iron Staub ( am really beginning to have a serious love affair with the Staub. You can work out your arms with it after you finish with your meal. How cool is that?) 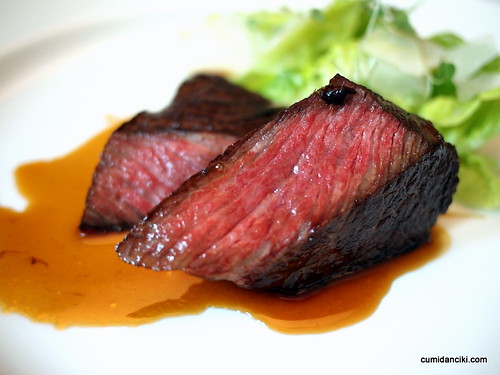 Char grilled master Kobe rump with baby cos and Parmigiano

Ah! the Kobe cattle.. According to my Japanese colleagues (and I see them a lot these days), the Kobe cattle are fed a beer a day, and they are massaged with sake daily and brushed for setting fur, and fed on expensive grain fodder.The beer is meant to stimulate the appetite of the cattle especially in summer, where the appetite is naturally depressed, whilst the brushing of the fur is suppose to to soften the hair-coat and skin, that are related to meat quality. Wow! What if I were a Kobe cow? What a life.. I think I could live with that!

Anyway Kobe beef is renowned for its flavour, tenderness, and fatty well-marbled texture and what can I say.. the one here at Cilantro passed my test. It was supple and marbled in the right proportions. I liked the fact that they seared it fast on the outside imparting an almost crisp outer layer, yet retaining a succulent, disintegrating fatty center. Bloody marvelous. 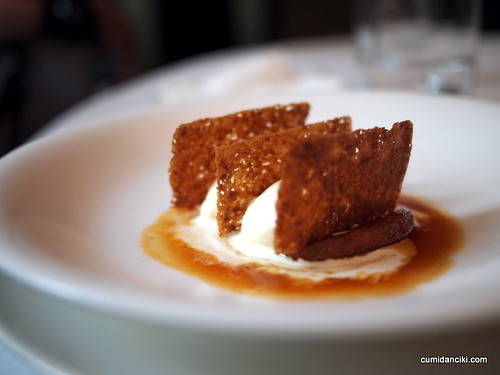 feuillantine of apple with calvados ice cream and coffee on the side.

Dessert was fine. Not really outstanding but a nice, sweet end to the meal. 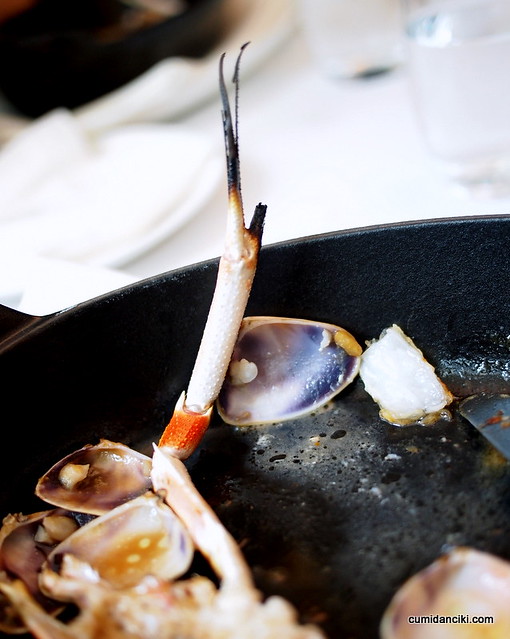 Cilantro’s Friday lunches are such a bargain, they have me clutching my burgeoning belly after each and every meal.. kind of like this photo that reminds me of District 9’s – Prawn! (it screams.. “help me I’m too full to move!”)

Yes, at just RM150++ with one glass of kir royale, it really is too good to be true. 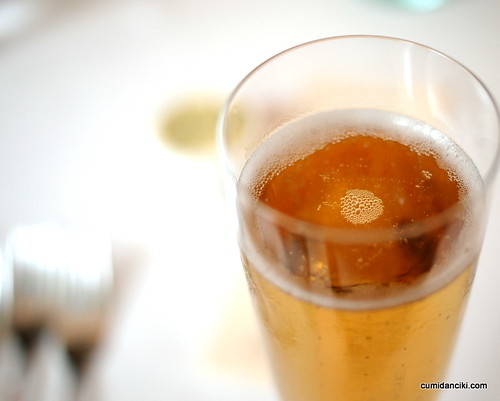 Just the other day, I had this conversation with a friend. Apparently my friend has a friend who is a Paediatrician. The Paeds told…