Every time I go back to my hometown, Ipoh, my uncle will wave a thick wad of DVDs at me with an evil grin and say, Oh guess what..  plenty of good shows to watch with your dad (his brother, my father).

By good, he means action. And by action he means loads of gun-fire, shooting, explosions, mindless violence , women losing their tops with ease and men who only cringe when someone puts alcohol on a scratch. Oh yes, that’s right. Major testosterone over-load kind of action movies, with a healthy smattering of buxom ladies. And so, in the same vein, I can see why The Expendables would be his (my uncle’s) and my dad’s (his brother’s) cup of tea.

The plot involves a drug cartel on a small South American island that is ruled by a vicious dictator General Garza (David Zayas). There’s also the dictator’s sexy, rebellious daughter Sandra (Giselle Itié) who naturally becomes Stallone’s love interest. Stallone and gang must put the bad, bad people away and restore utopia once more. That’s pretty much all you need to know about this movie really because later, all you will remember will be hardcore action stunts, constant raining of bullets, flying daggers and a world where brute force rules supreme! Try not to be too over awed as the night sky goes ablaze with explosions and entire buildings disintegrate as Sylvester Stallone and his team of tough guys do it the macho way.

If you are looking for a movie with a great plot and meaningful storyline, this is not the film for you. This film is about action! Talk less do more. This is a movie about men being men, men blowing up things, men whacking the living daylights out of what’s wrong.

However, having said that, the cast is brilliant. Watch out for the Arnie (Arnold Schwarzenegger) cameo, that was really the bomb. The other heavyweights in the genre include Jason Statham (Lee Christmas) , the sexy, knife-throwing, hoodlum who has all the macho, cheesy one-liners when it comes to women. He is hot to chicks and he lets his daggers and body do the talking.

Jet Lee as the pint size fighting machine who felt that he was always getting the short end of the stick, forgive the pun. Then there is Dolph Lundgren as the menacing bad guy Gunnar Jensen, who is actually not bad per se, just erm, misguided..? no, drug f***ed would be putting it more succinctly! And finally, my favourite guy in the show, Mickey Rourke the melancholic knife-loving Tattooist, who is searching for his lost soul and perhaps the only one in that movie who was really called to act, if at all and shed some tears. I have to say that for men their age, they really had impressively ripped bodies. Still.

all photos from filmofilia

So there you have it, chaotic car chases through narrow streets, big scale fight scenes with heavy gun power and loads of knife throwing. And the girl. Always the girl. Who needs a plot when you have such an unrepentant action extravaganza. The Expendables represents everything my dad and my uncle could hope for in a good, no wait, scratch that, in a GREAT action movie! 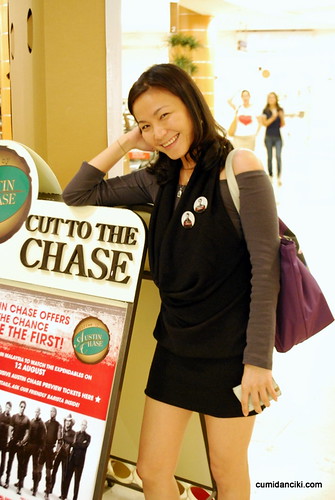 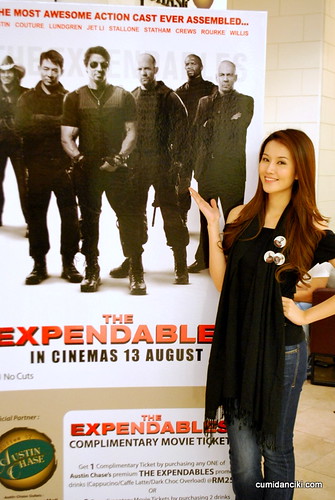 We even managed to meet the gorgeous Wincci Soo – Miss World Malaysia 2008/2009 at the pre-movie get together at Austin Chase , where light refreshments were served.

All in all a great night out. The Expendables will start screening in Malaysian cinemas on August, Friday the 13th (ahem!)

Kampachi at Equatorial Hotel, KL has been one of my all time favourite Japanese a la carte places to eat… so imagine my excitement…