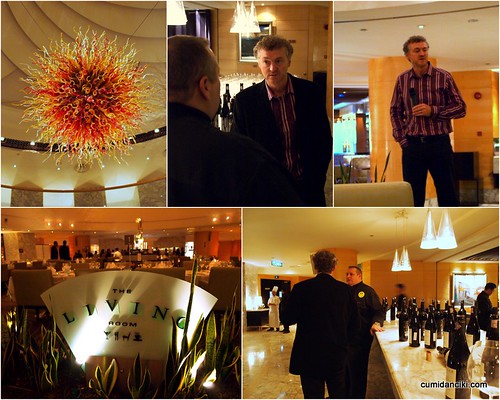 The invite was clear.

We had to show up at Westin, for the Kaesler Winermaker’s dinner.

Right, so I know Westin, but who the hell is Kaelser?

Apparently even in this day and age, Reid Bosward is  is still using a huge variety of oak barrels and goes to great pains to match each wine to ensure the most complimentary fit. One of the other ‘success secrets’ behind the excellent wines to come from Kaesler obviously relates to his ability as a master blender. Reid openly admits that he is not a one man band when it comes to making wine – he is ably supported by Stephen Dew in the winery.

Well, lucky us! Tonight we would get to meet Stephen(photo above) and he would host our Winemaker’s Dinner at Westin KL. For Stephen Dew’s full C.V. kindly refer the the end of this post.

Why do women always fall for bastards? 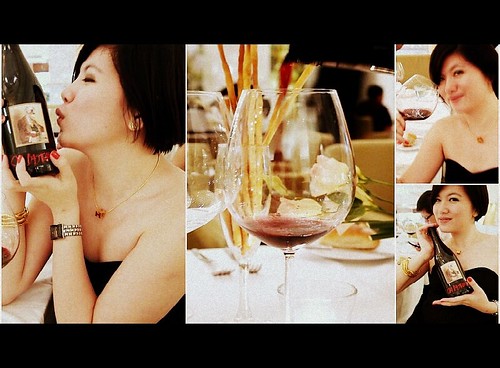 Ye Old Bastard..
I tell you, these Australians are amazing. Australia has certainly made Syrah its own, even bestowing it with a new name – Shiraz.

In the warm, dry climate of Australia this grape produces an intense, unique flavour that is distinctly Australian. There are different years available but let me just say that the Kaesler 2003 Old Bastard Shiraz is the most expensive of the lot.. and oh, the poor bastard who is going to pay for it!

I’ve heard it as being described as a big, brooding bouquet that is tighter than a Swiss bankers vault.

This wine is like a full-throttle Formula One that races round the mouth. All the components are there but was a criminal waste to drink it immediately back then when it was bottled, as it takes time for the components to mesh. Now the perfect drinking year for this wine is supposed to be 2010.. which is right about now. We cannot get luckier than that as this wine matures here and now in the present! Rated as Excellent, who cares about the price – as long as someone else is paying for it.. that’s what my friend Eiling(photo above) says and you can see just how in love she is with the Old Bastard.

Right, dispensing with the introductions, on to dinner at The Living Room, Westin Kuala Lumpur. 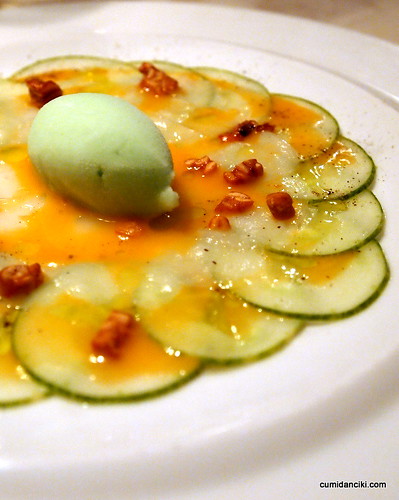 The first course of the night was the Hokkaido Scallop crudo, green apple sorbet, cucumber and this was paired with the Old Vine Semillon 2008. The refreshing crunch of the cucumbers paired with a somewhat summery aroma of fruits really brought out the zesty flavours of this white wine. I liked the fact that the Semillon was not a dry wine, which might have over-powered the scallop and green apple sorbet.
. 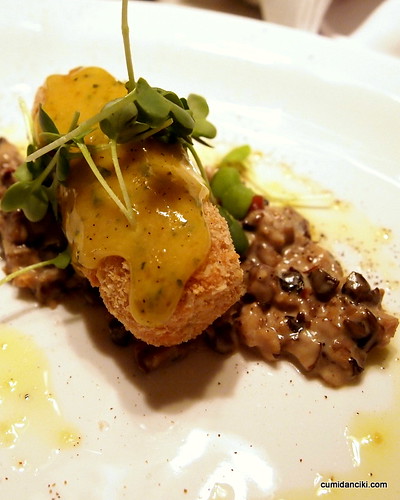 Next up, the apricot and almond beignet, creamed wild mushrooms, creamed tarragon butter emulsion paired with the Viognier 2008 (pronounced Vee-on-yay). The Viognier smelt spicier than the previous white and had a creamy finish. This was definitely a more powerful wine and when served chilled went rather harmoniously with the buttery and creamy texture of the wild mushroom.   This dryer white brought out the flavours in the apricot and almond beignet and heightened its taste. 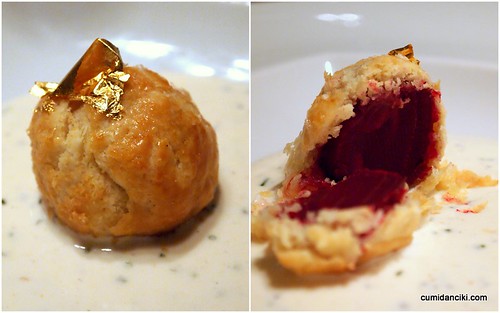 This was one of my favourite dishes of the night, only because I am a huge fan of beetroot and pastries too, of course! Baby beetroot in flaky pastry, horseradish, chives paired with the Stonehorse Shiraz Grenache Mourvedre 2007 -what’s there not to like?
This shiraz was a gorgeous, bright garnet color and smelt like spicy berries. The acidity and the length of the aftertaste was great at balancing the somewhat ‘earthy’ taste of the beetroot. Cumi does not like beetroot for this very reason. I like it, for the same reason! (Cumi says it’s like eating a mouthful of earth..) Anyway, if you notice the shiny, gold leaf on top of the pastry you would be correct in assuming that it is in fact, gold. This starter has probably improved our health a little bit because gold is actually employed in the treatment of rheumatoid arthritis!

Pretty tasty. With three starters, I would have been happy to call it a night right here, but obviously there was more to come. This was just the warm-up. 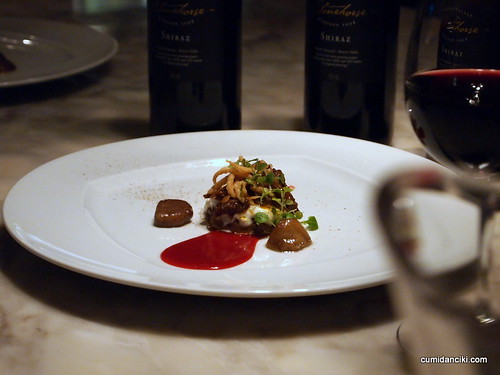 This next dish I did not like so much. I found it too salty and just a mess of tastes that I could not comprehend. There was too much going on on that plate and after awhile all the flavours merged into one. This was the roast lamb neck, crisp ice fish, eggplant, tzaziki, smoked bone marrow, cherry puree paired with the Stonehorse Shiraz 2006. 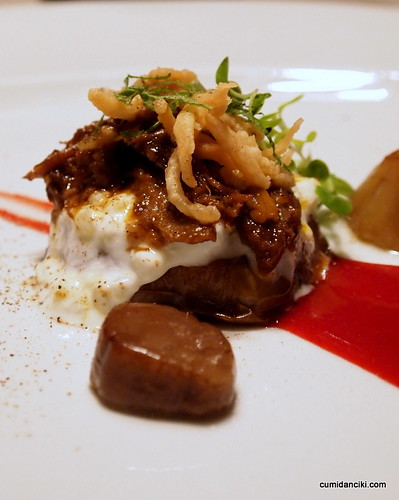 What I can remember though, of this dish, was that the fatty marrow was nicely tempered by the tannins and the acidity in this Shiraz.

How was this Shiraz different from the previous one? Well it was more full bodied with a velvety finish and this was just perfect for the rich, somewhat gamy lamb in the ensemble.  I tasted a slight, lingering liquorice aftertaste in this red too.
. 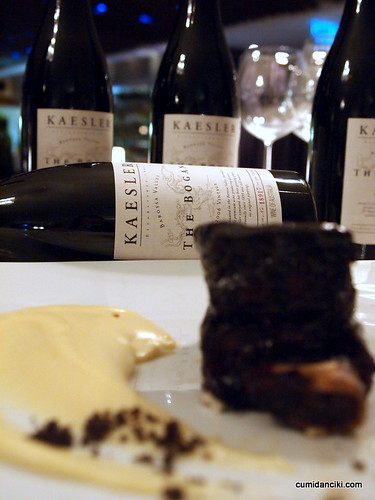 Our second main course for the night was a licorice port glazed braised angus beef short rib, smoked potato puree paired with a wine that I am still excited talking about even now, The Bogan Shiraz 2006.

If you cannot afford “The Old Bastard” , then trust me when I say, the Bogan is really good enough.

If you cannot afford “The Old Bastard” , then trust me when I say, the Bogan is really good enough. An outstanding wine that comes for the Australian vineyard at Marananga, this was my favourite wine for the night. 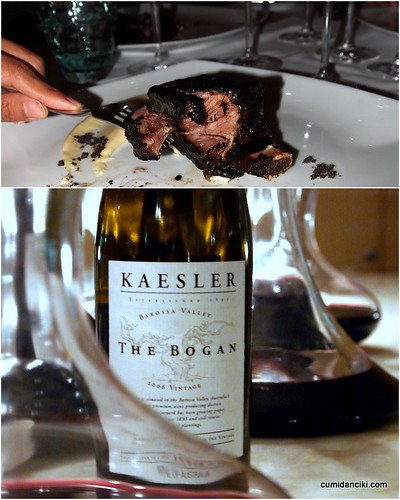 With an amazing dense, dark purple colour that you just want to lose yourself in (for a couple of hours), the Bogan was the perfect match for the equally densely flavoured licorice port glazed braised angus beef short rib. The Bogan’s full-bodied, structured taste could be the only answer to such an intense and heavy main course. An oaky taste dominates and the aftertaste is luscious and prolonged.

As with any good thing/good sensation,  the longer you prolong it the better. Same goes for the Bogan.

As with any good thing/good sensation,  the longer you prolong it the better. Same goes for the Bogan. This was really the highlight of the night for me. A voluptuous, sexy red that I won’t soon forget. I think I should send Cumi out for a case or two since writing this post has got me salivating all over again. 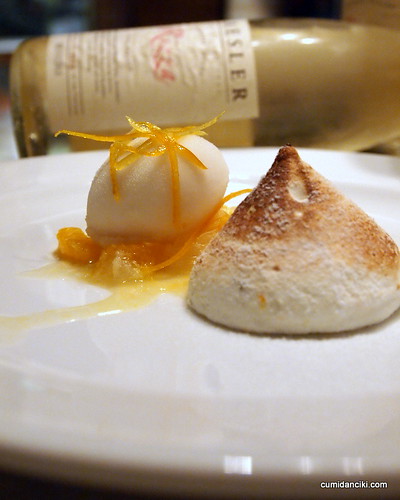 As the night drew to a close, dessert of marshmallow, citrus salad was served with a charming Riesling – the Rizza 2009. Rizza is made from 100% estate grown Riesling. It is a refreshing, semi sweet style of wine that is low in alcohol and perfect to enjoy with desserts or equally as a drink by itself.

Rizza is what many locals in the Barossa Valley refer to as “Riesling” , and is also a turn of phrase for “palate cleanser”. I only like this sort of super sweet Riesling served so cold you get a brain freeze from it. Anything less would be difficult to drink.  This Rizza would be an amazingly refreshing aperitif on a hot day.

All in all a great night out with the other bloggers, KY, Haze and Eiling.  Thank you Stephen Dew for being such amazing story-teller and for sharing your inspiring, wine-making tales with us. Thank you also to Yoke May of the Westin for this kind invitation to participate in such a lovely dinner.

Stephen Dew’s CV:
Stephen Dew has worked as Winemaker for Kaesler & Nashwauk wines since 2002. Stephen is responsible for the day to day running and management of the Barossa based Kaesler cellars. All estate Kaesler and Nashwauk (McLaren Vale) fruit is processed through this facility. Throughout his time working with Reid Bosward at Kaesler, Stephen has been
an integral part of the company’s growth through acquisition of old vine vineyards and
development of single vineyard wines.

Below is a summary of Stephen’s career:
1989 First vintage in the wine industry at Lindeman Wines, Karadoc.
1995 Assistant Winemaker for vintage at Passing Clouds winery in Victoria.
1995 Returned to Lindemans and entered the Micro Lab, got a white coat and the power to
shut down a bottling line down with one signature, found it was a good way to annoy people!
1997 Attended University to study Business, but returned to the wine industry to once again pursue winemaking.
1998 Vintage at Penfolds Wines, Barossa Valley.
1999 Cellar door manager at Charles Melton Wines.
2000-2001 Vintage at Cellarmaster Wines.
2002 – to date,  at Kaesler and have never looked back, making some of the worlds
best red wines and enjoying every bit of it.