Just before the Christmas hols last year , I had the pleasure of visiting my sister who lives in Singapore. One of her all time favourite places to dine at is Absinthe on Jalan Pasoh, Singapore. Prior to that, Hairyberry had taken me there for the first time and the food was magnificent.  I have been back several times and on one of the occasions we managed to chat with the Chef. At one of these dinners I learned from him, the 10 ways in which to show your pata negra the love it deserves, which was extremely interesting and too good not to share! 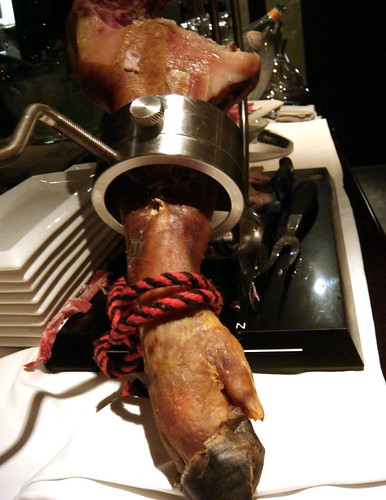 If your ham is going to be consumed over a period of time, then the ham should be positioned with the hoof facing downwards for cutting. This way, you will eat the thinnest part of the ham first, which is also quickest to dry out! Of course the faster you eat it up the better.

I see the chef constantly sharpening his knives. Apparently keeping knives sharp will ensure you cut slices more easily- the blade will slide through the surface of the ham almost by itself, cutting slices that are almost translucent. Yum!

Oh this one is good to know if you are ‘accident prone’ like me! Keep your hands, outside the cutting area, in order to avoid accidental moves that may lead to cuts and you bleeding all over the ham. I think they are more concern about preserving the ham in 100% edible condition rather than about you bleeding to death. haha!

As you start cutting slices off the ham, the tendency is to start curving inwards. One should cut the slices in a uniform manner, and avoid the characteristically curved shape of ham. 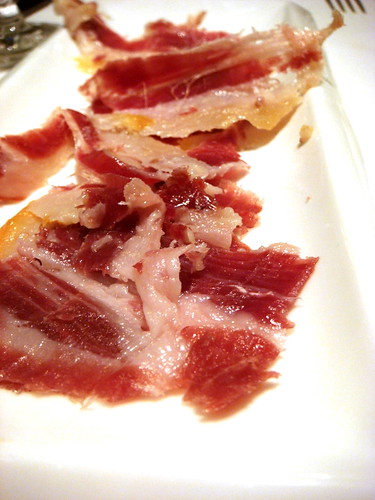 If you notice the cutting surface starts to take on a curved shape, you should stop cutting and even the area out.
.

Don’t forget the meat around the hip bone. It is hard to get to unless you are an expert but if you carefully use a boning knife (or a small knife), you can actually cut around the bone with the blade. Initially, there will be some ham left on the bone, but with practice, you will get a cleaner hip bone.

The ‘maza’ is widest and fattiest part.  The ‘babilla’ is the narrowest and leanest part. The ‘contra’ has an abundant fat content which shows as mottled dots, not as veins as is the case of the ‘maza’.

Ham must be eaten at room temperature in order to get the best taste out of it. If the ham has been cut and stored in the refrigerator, take it out of the refrigerator an hour before eating, so that it can warm up to temperature. Have you ever eaten cold fat? Gross! 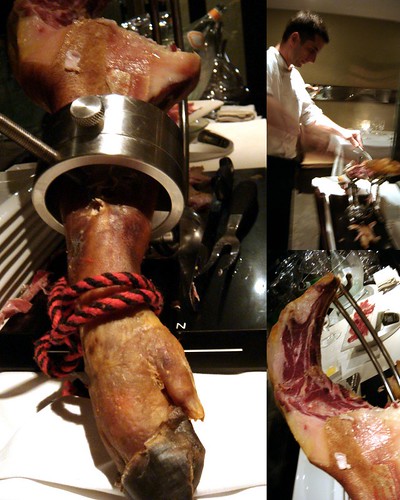 In order to preserve its qualities, ham must be kept in a cool, dry place. Like in my kitchen larder, in my house. All Pata Negra welcome!

When you stop cutting slices off a ham, you should keep the cutting area protected in order to ensure it doesn’t dry out and become rubbery. The ham’s own lard or fat is the best protection. First, rub the cut/exposed surface with a piece of fat you have previously cut off the ham, and then cover the entire area with any remaining excess bits you might have. After covering the entire cutting surface with bits of fat, cover the ham with a cloth or plastic wrap.

How ingenious. Now I feel like I can be a carving expert anytime..  ok, maybe that’ s being too optimistic..  maybe starting as an expert in my own home.. !

The Delish is the latest joint on the Desa Sri Hartamas strip, that recently took over the old Jarrod and Rawlins space. It looks…