Ciki Chatters: I was so excited when I heard last year that  the Garmin-Asus was the hot topic of discussion at the Mobile World Congress 2010. Apparently Garmin-Asus was the first to introduce their GPS-enabled smart-phone, the Nuvifone M10. Little did I know, that I’d be asked to review one of my own! 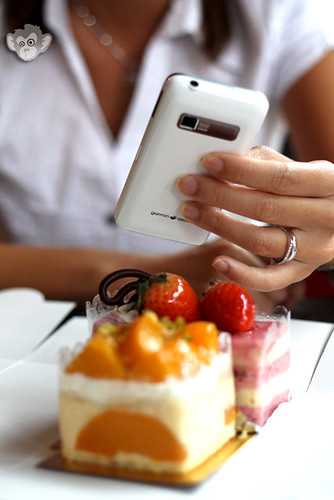 Ciki takes a photo of her dessert in portrait mode.

Not many people know this, but KL roads confuse me. That’s right. I keep telling myself it’s a damn well kept secret but because I am normally the last one to arrive on site, people have started to suspect that I am lousy with roads.  I put my Garmin to the test by purposely taking wrong turns to my point of destination in KL (somewhere ‘ulu’ (remote) in Ulu(remote) Ampang) and lo and behold it kept recalculating my direction until I got to the appointed destination. It was zippy, and spoke in a clear American voice  (like Ellen Degeneres’) and managed to get me back on track no matter how many wrong turns I took. My previous garmin was an albatross. It gave me the information only after I had turned into the unfortunate dead-end. Also, on a cloudy day, the Nuvifone M10 actually picks up a signal faster than Cumi’s Garmin 76csx. Impressive. I noticed that the M10 came  with an easy to use navigation software .. maps, voice-guided navigation, and even more advanced tools like lane assist with junction view and connected services for weather, traffic, fuel prices, and so forth. I found that I could even download cityXplorer maps, which provide routing using public transit options. 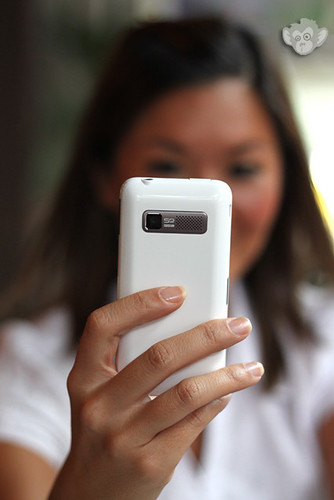 Ciki checks out the multiple functions on her Garmin Asus

This Nuvifone M10 looks great on a lady because it is sleek and light and the one that I got to review, was truly a handsome phone. White in color, it fits in with all the trendy components in my handbag. Too bad the screen is not reflective, otherwise it could double up as a hand held mirror (in moments of make-up crisis).

What I like about the phone is also the fact that the navigation functions are linked to the calendar, contacts, e-mail, Web browser, and messaging apps. I can also geotag any photos I take with the phone’s 5-megapixel camera and share them via Facebook or Picasa. I have tested out the camera. It is brilliant in the light but not that good in darker conditions. Nothing can beat the Sony phone cameras. What I do not like so much though is that there seems to be no macro function for my “up close and personal” shots on food! 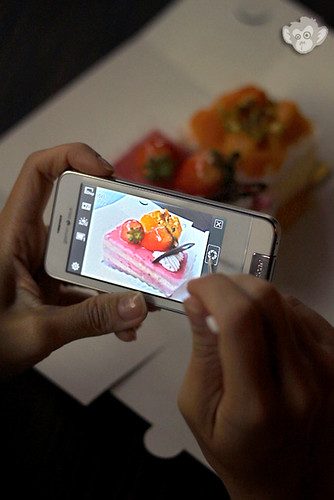 Ciki switches to landscape mode and uses the stylus for added control.

This phone also has the indispensable Wi-Fi, 3.5-inch WVGA touch screen and 4GB of Flash memory. I like this GPS smart-phone.It’s such a handsome phone. I think I am going to keep it.

(all photos credited to A lil Fat Monkey)

Cumi Chatters: All of us want the ultimate gadget to complement our lives or the lifestyle we seek. Some find it instantly on their own while browsing through shopping centers, others find it in the T3 magazine or on the gizmodo site or on a fashion site. It’s frivolous desires. You jump from gadget relationship to relationship until one day you realise that all you bloody well need is a reliable ‘companion’ that functions well and that looks good in your eyes.. and maybe remains with you forever faithfully. However gadgets just don’t work that way. They either die a horrible death, get stolen or get handed down to an unappreciative person. Is the Garmin Nuvifone M10 a worthy gadget to keep forever for the function seeking (wo)man?

I don’t use PDA’s although I used to own one – I didn’t like it because it didn’t have a keypad for me to type (while driving) and it was slow. I’m generally good with directions. I have an alphanumeric candy bar phone with window 6 mobile (because I need it to sync with the outlook address book). I don’t use most of the features on it except the games. It’s not fast, the screen resolution isn’t great, but I like it. I’ve dropped it a couple of times on the road and amazingly it survived! Is the Garmin Nuvifone M10 for me? Probably not, you answer, and you are quite right, but I am getting older, my memory is fading so I might just need a talking GPS (because maybe my eyesight is getting poorer..?). As I get older, I might want to feel younger so I might just need a cool looking phone that’s not too bulky and has some interesting features. My  current keypad phone is a little older and the slow processing speed does bug me. The Garmin is faster although there are lags especially when using the camera – something I can’t forgive in this day and age. It can replace my silent 76csx garmin – dedicated for outdoor usage. I’d still like to have an alphanumeric pad on it though and not just the touchscreen. Can you imagine a cracked touchscreen phone??? E.T. can’t even use it!

Oh! what’s absolutely essential these days in a phone apart from Quad band, 3G, wifi,  bluetooth, pocket office, travel tools, facebook, twitter, opera… MUSIC and Video! Asus has made sure you can plug in your AKG, Sennheiser,  Grado, or just an ordinary headphone/earphone 3.5mm jack. With a little less than 4G of space available direct from the box, that’s plenty unless you are an audiophile requiring uncompressed audio. Sound quality is above average. 3.5in display is crisp (65,000 colors TFT). If you jack up the brightness to maximum, you could get blinded.

What’s the ultimate deciding factor? Price! We were informed that it could be priced somewhere between RM1,800 to RM2,000. We will know from next week onwards, once they launch it here in Kuala Lumpur.

This GPS phone now replaces my role as the human GPS. Ciki is now able to locate all the easy and hard to find places plus keep her website updated. It also makes her look like/resemble a hi-tech princess. What it doesn’t replace though is her hand-held mirror, something that shiny phone casings or dual camera phones (eg E71) have – an all essential for pretty ladies like Ciki. She’s had it for 2 days from a full charge and there’s still a little left to go. May I now use it on the next charge please?

What I’d like to see next from garmin asus is a phone for the outdoorsy types. Something that can withstand the torrential downpour, 3m waterproof capabilities and the occasional drop or knock on a hard surface. Also, a common mini USB port would be better for the person on the move. You don’t have to lug around so many cables plus you can  easily find a generic USB cable to charge from if you are caught with low battery.

Niels Arden Oplev’s Millennium: The Girl With the Dragon Tattoo is the latest movie we have watched, and we find it totally rave worthy!…