For St. John, we took the Circle line to Farringdon. We exited the station bearing left and crossed over Turnmill Street on to Cowcross Street which took us to the junction of St. John Street. At the junction at Smithfield Market, we turned left and walk along St. John Street for around 50 yards or so… and finally, we saw St. John on the opposite side of the street. (yes, it really is that confusing, though not as far as it sounds.) 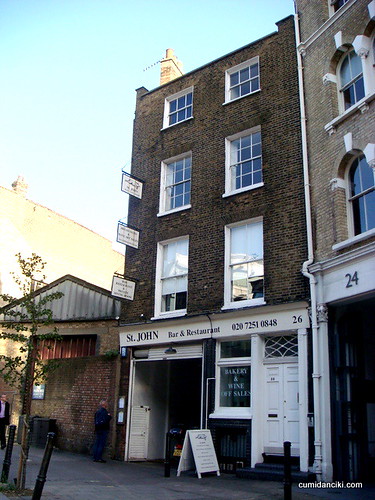 Chef Fergus Henderson, extraordinary cook and rebel. This place looks like a butcher’s (actually an old smoke house) and is located adjacent to London’s most famous meat market, Smithfield. The whole surroundings make the restaurant seem rather incongruous. There is no palaver here, no pretension – what comes out of the kitchen is good for the stomach and the soul! If you are expecting dainty amuse bouches and cutesy little starters, then you have come to the wrong place. 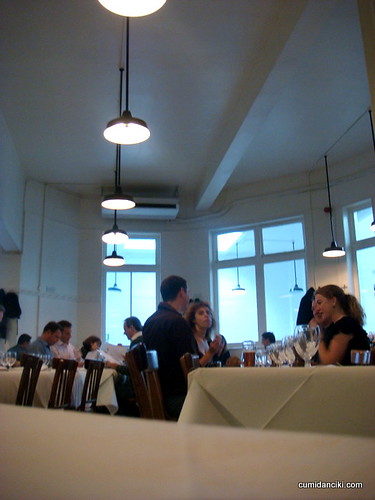 I remember studying in London at the peak of the mad-cow-disease saga that had everyone paranoid to the max, about what they ate. During that time in Britain,  where eating red meat was almost stigmatized and offal almost taboo, St John was leading the way in AGAINST – against eating meat! It is interesting to note that Chef Henderson was trained as an Architect. Seriously, this place looks like the cafeteria in my old Halls of Residence.  I am talking whitewashed walls, long rows of uncomfortable wooden tables and chairs and gray flooring. 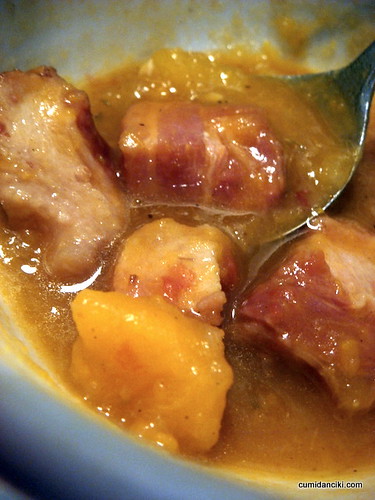 We take one look at the menu and saw heavy, robust, masculine English food. The bacon squash soup photo speaks for itself. If you have an Asian stomach, you will do a double-take at this so called ‘starter’ because I think there is half a pig in there, in the form of bacon chunks. If you are use to the anorexic pigs we get in Malaysia, get ready to be wow-ed. The taste is awesome. the texture and taste of the pork should blast you into orbit. 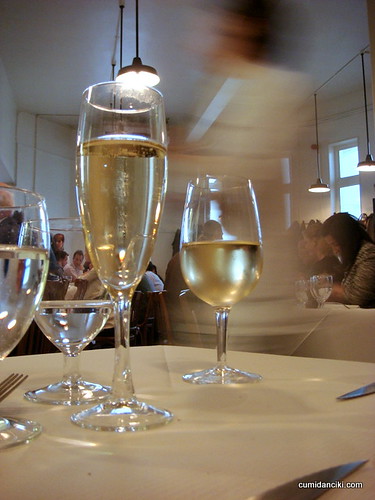 Henderson’s defining principle of nose-to-tail cooking has also found its recessionary time. “If you are going to kill an animal,” he reasons, “it seems only polite to use the whole thing.” 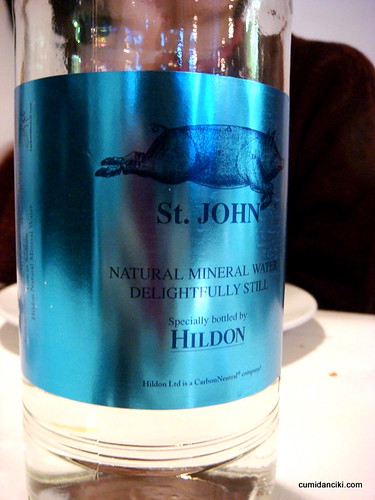 Fine.. we now get the idea. We start to anticipate a really fine meal. 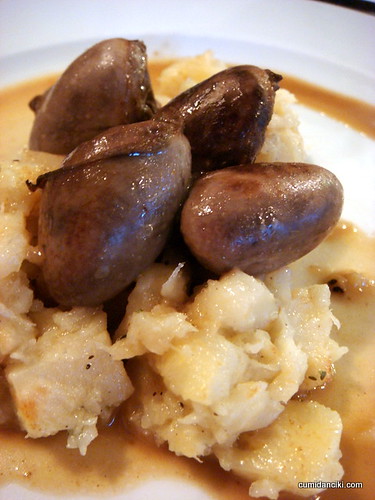 Is becomes evident as we sit there, why this place is so cool. There is unconventional humor in eating such unmentionable cuts as heart, brains, marrow etc.. all of which have helped make St John the fashionable institution it is. My duck ox heart with celeriac was quite interesting. The  characteristically muscular, rubbery meat of the heart was delightful! Since I am a big fan of  internal organs, I had no complaints about this starter. 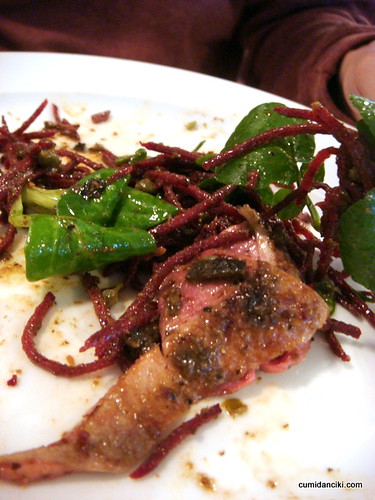 This cold salad was well, cold! I did not the mallard as it had not much of a flavour to it. The beetroot was interesting as it was crunchy and had a rougher texture about it than regular beetroot.

We also had the Roast Bone Marrow (no photo) . This is permanently on the ever changing menu so if you go, you must try this signature dish. The marrow is superb. As you can guess, the bones that stand up form your plate like the hulking stonehenge are huge, thick and  over-spilling with sweet, slick, oily marrow. This is served with a long lobster fork-like implement, necessary for the successful extraction of precious marrow. 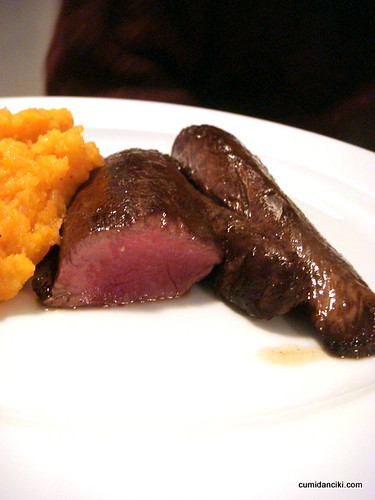 Someone brought this to our table by mistake. I took a photo anyway. 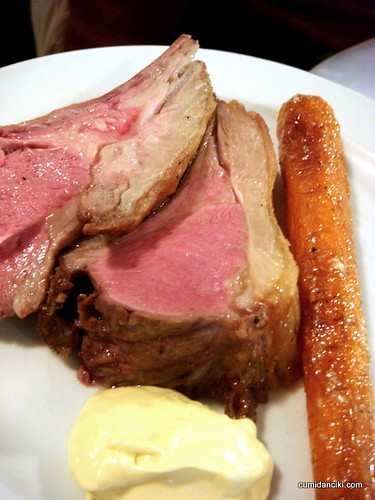 Then enter the Mutton special. I died and went to carnivore heaven. I had my reservations about the mutton being too gamy , but this was just superb. Soft, tender, moist. How do I find any more extravagant superlatives to describe this dish? 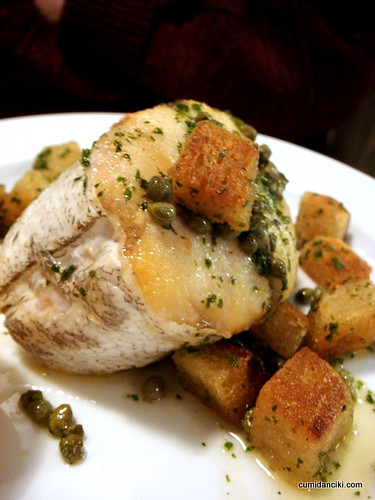 The fish was average in taste but fresh enough. I liked the crunchy croutons and the massive slab of fish. St John has this knack of making even fish, look like an uncouth slab of meat. 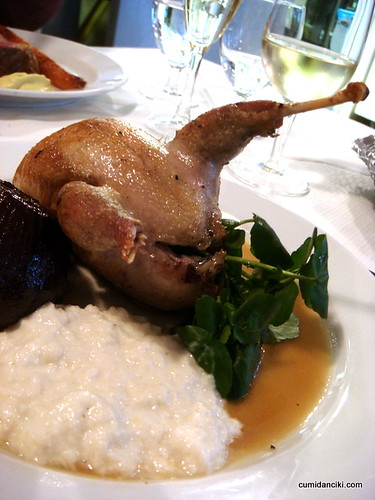 Wow! Finally, I actually get to eat that famous “partridge in a pear tree” that the song sings about and just before Christmas too. The meat was excellent, the taste superb, the texture like a young soft supple bird that had been roasted on the outside to perfection. Unfortunately, the meat was blood red near the bone (and I mean red blood plus translucent meat and blue veins – like uncooked chicken). When I asked the waiter at St John he said “This is how we eat it here”. Take it or leave it. OK, fine, I’ll take it but I’ll leave the blood on the side. Cocky huh? 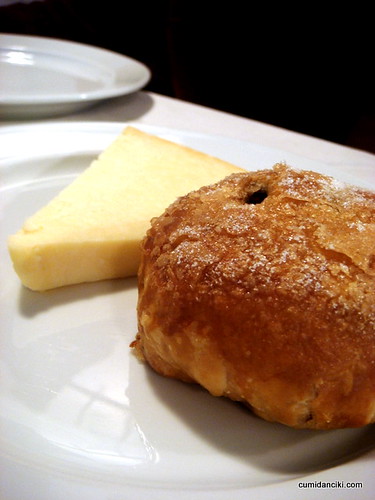 I was told that no other restaurant will serve you such a hearty dessert as the eccles cake. It was huge, solid and went great with the lush, soft and mellow cheese. The Eccles is an English classic. It is a puff pastry with currant stuffing. 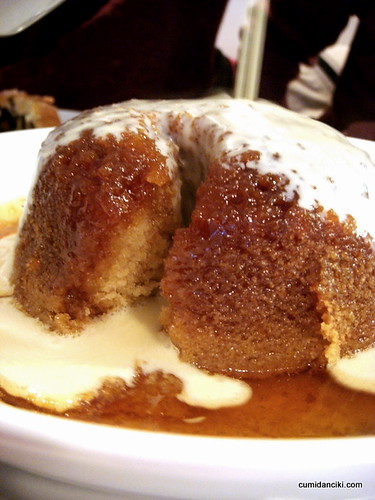 The steamed treacle was sickly sweet and rich. We nearly died finishing this as we already had the eccles cake before hand. However, we comforted ourselves that we would soon be out in the cold, walking it off. All in all, I enjoyed my St. John experience very much. The food is really good. The service was average, our initial waitress was a little rude and cocky,  but as the restaurant filled, she was replaced by another waiter who was much better. As I am a big fan of offal and weird cuts of animals, I will be inclined to keep coming back here for some exciting Nose to Tail Eating.. The service will not deter me!

You can buy the “Nose to Tail Eating – A Kind of British Cooking: St. JOHN Cookbook” as it is on the menu. They also sell St. JOHN Gift Cards if you check with the waiter. 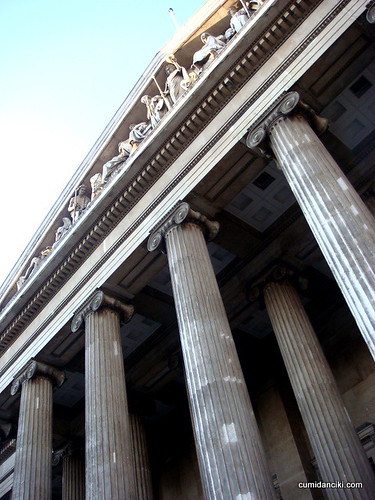 Since we finished at around 2.30 pm and still had time to kill before out 10pm flight, we decided to go walk off that “animal and a half” residing inside our stomachs.. 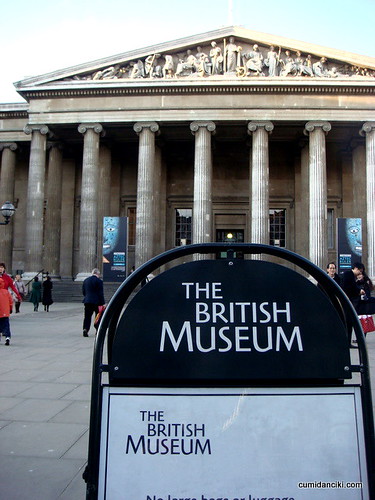 .. by visiting the British Museum. 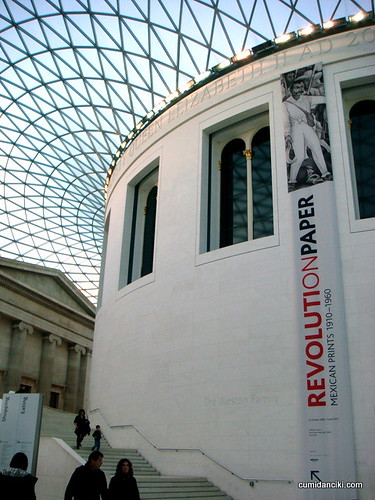 Admission is FREE. The centre of the museum was redeveloped in 2001 to become the Great Court, surrounding the original Reading Room. I like the  modern roof that you see that lets in a lot of natural light. 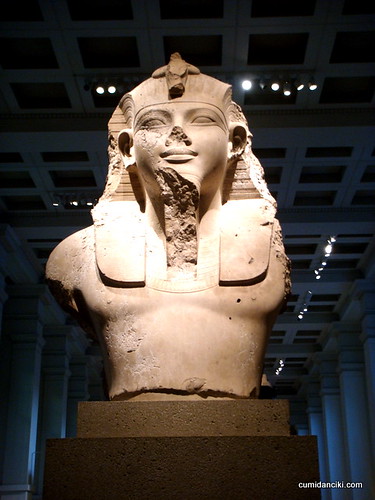 The British Museum is a museum of human history and culture and its collections, which number more than seven million objects are amongst the largest and most comprehensive in the world.  The collections originate from all continents, illustrating and documenting the story of human culture from its beginning to the present. The British Museum was established in 1753, largely based on the collections of the physician and scientist Sir Hans Sloane.

After exploring and walking around this place for another hour and a half, it was time to leave. The British Museum closes at approximately 4.30pm and we had a plane to catch. Thus concludes the Travel London Saga. It was great.. and I really did not want to go home, but I missed my husband and also eating Char Kwey Teow in some hawker center somewhere in KL. I also missed the heat. Hope you guys had fun reading about my trip. Drop me a line(via Contact on Main Menu) regarding any experience that I had, that you want clarified or more information about and I will gladly answer them if I can!

What a cute name you say. Well.. Chir Chir is actually pronounced Chi-Re Chi-Re,  and you have to imagine the sound of boiling oil when…