We received instructions to drive pass HTAR (Klang General Hospital), when we see a Shell Petrol Station on the right, be prepared to turn left at the next traffic light which is located opposite an Esso Station. After the turn, there is a 7-11 store. Turn left again at the next junction and drive along the road till the end. Soon Tong is located  on the right hand side, opposite a bungalow. The GPS coordinates: 3°01’34.37″N, 101°26’28.46″E.

“Crap! we can’t find it… directions are mind boggling and the GPS numbers don’t work with my Garmin! Got to turn back!”

Fortunately our entourage included blogger, A lil fat monkey whose eagle eyes spotted the Shell and Esso Station which got us on the right track soon after. 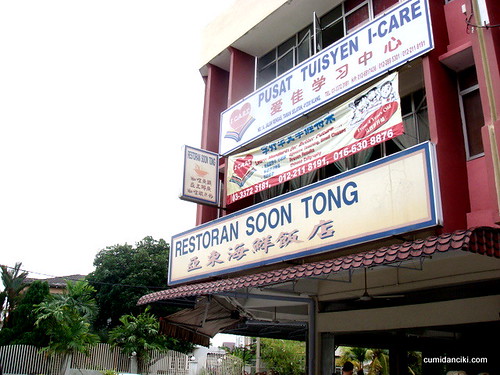 Soon Tong came to our minds and tummy after reading blogger Paranoid Android’s hunger inducing post and we were determined to eat the orgasmic Orchien or Ochien (chinese oysters) and Smoked Duck that he talked about. 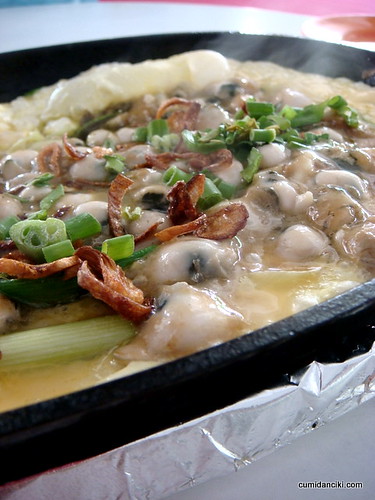 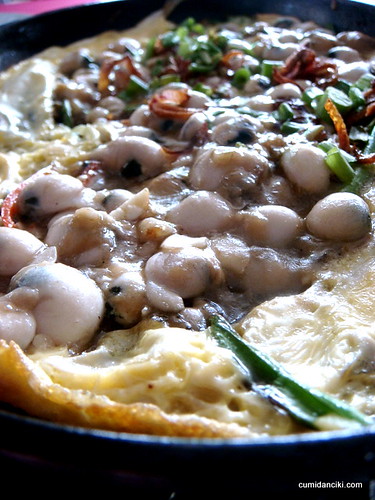 When they brought out the Orchien in a super hot plate or skillet, the raw  beaten egg was still runny and wonderful fumes of egg and oyster assaulted our nostrils. Soon, the egg turned into a yellow crispy layer, whilst the plump oysters retained its moist succulence. If you prefer your Orchien fried up to a crisp (from the hawker stalls) without the hot plate, thats available too. Having belonged to that camp of crispy Orchien eaters, I was really surprised to find this version was in a league of its own. It was superb in taste and the oyster was so fresh and cooked just right that the soft center explodes in your mouth as you bite into it, filling your mouth with the taste of the ocean. Tres tres magnifique! 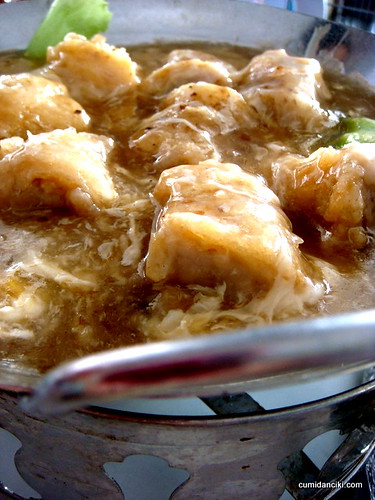 The lady boss was so reluctant to tell us what we ate and finally just said – fish ball. We kept asking her because it sure as hell did not taste like fish ball. I think she was worried we would run away to KL and start a restaurant of our own, based on her specials! Anyway, we managed to pry out of her that the fish ball, was in fact, a meat ball, and the only fishy thing bout this dish was the fish-maw that encased the meat ball. This was served in a thickened eggy broth and they served the dish with vinegar on the side. The taste was so good, we decided to fore go the vinegar. 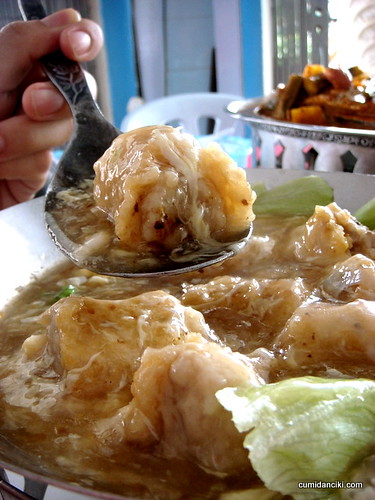 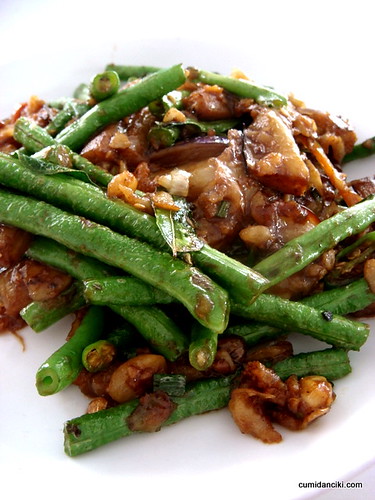 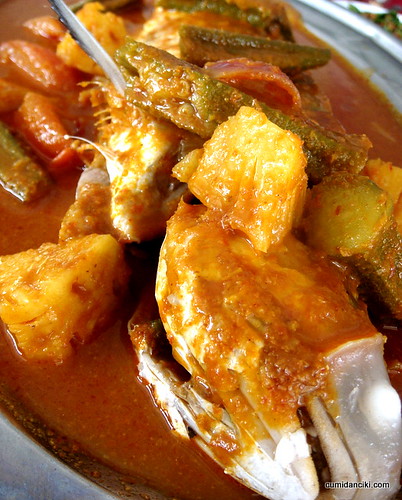 Cumi & ciki had to hunt high and low for this because the lady told us that it was “Mah Yau” fish .. and we KNEW it was not Mah Yau.. so here you have it.. the Senangin or some might call Selangin, a sea fish.

According to the Aquatic Dictionary, there are several definitions of Senangin = Eleutheronema tetradactylum; Polynemus paradiseus;p Polydactylus sextarius; Plotosus canius. This fish is a sort of threadfin. The flavour and texture was fantastic. Cumi loved the fish. Since Ciki prefers fattier fish , I can say that I thoroughly enjoyed the Assam sauce. It was sour, slightly spicy and really pungent with assam herbs. Delicious. 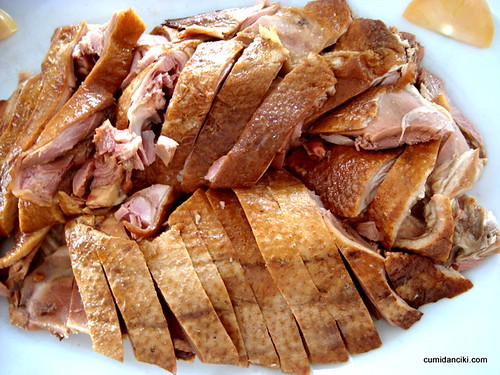 This was not my favourite, but our other lunch companions blogger Brother B and A Lil Fat monkey liked it. It was served cold and the smoke flavour was just a tad off, if you ask me.  Also, the skin of the duck was just a bit too fat. By right, the smoking process is supposed to burn off and reduce that layer of fat. My mother makes the best smoke duck in town, so either beat hers, or don’t even bother! Well, what did this smoke duck taste like? It tasted like cold-cut HAM. 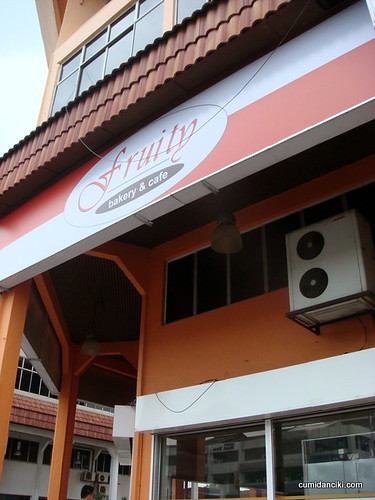 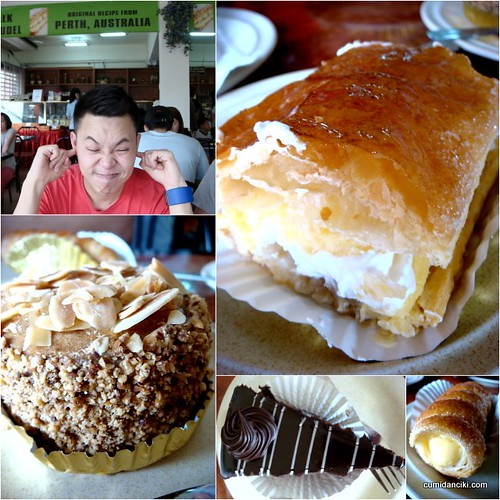 So here we are at Fruity Cake & Bakery, where the cakes are made with cream and the Klang kids scream and scream till they get a fair share of it. You can see A lil Fat Munkey enjoying the noisy children around him. The signature Apple Strudel from a ‘Perth original recipe’ was rather small in size. One thing though, you can count on the cakes being affordable if they are found in Klang. Klang is well known for cheap and good food, actually. We had to remind ourselves to judge with standards that reflect the price and vice versa. 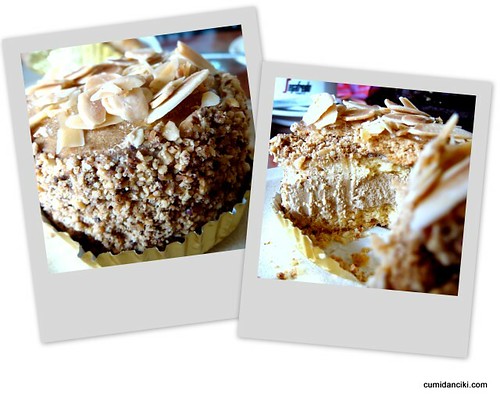 A lil Fat Munkey said the cream horn passed his test and Brother B liked it too. All of us found the Amoure (photo above) unusual. The center had a salty cream (mixture of nescafe, icing sugar, margarine and shortening?), sandwiched by 2 (Marie brand?) biscuits then coated with a layer of apricot jam and more  icing cream then topped with nut chips.  The whole thing wasn’t soft as expected and we literally had to pry it open with a fork, after a futile attempt to try and slice it open.

We had a great lunch outing .. we will be back for sure to crack that big nut, Klang, and find more hidden gems for food, in the near future. You can count on that! Berlin.. the city where you can eat for cheap. And eat well. What a lovely reputation. The Fleischerei located in Prenzlauer Berg was the…