If you once thought to yourself.. I wanna be a rockstar when I grow up..

This show will make you think twice. 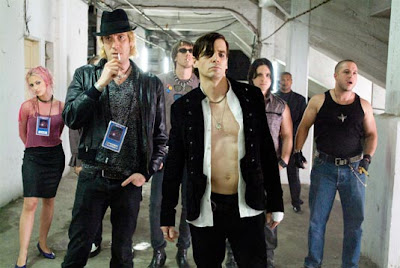 “The Informers” follows the sordid life of a couple of young, rich, bored, talented(?) Los Angeles kids. There are the spoiled rich kids who spend their nights doing drugs (and each other); there’s the television executive who is cheating on his wife; there’s a visiting rock band whose lead singer is on the verge of a breakdown; there’s a nobody looking for a break into showbiz who gets caught up in a kidnapping when his no-good friend shows up on his doorstep.

It has a good cast and a cool soundtrack (Devo, Simple Minds), but it also has some very ‘kayu’ (wooden) acting.. like so bad t.v. soap opera. The Informers is not so lousy that you can’t sit back and enjoy it, but nor is it good enough to go and see. Just don’t spend money to watch it , if you catch my drift.

Look out for Kim Basinger.. has her hairstyle changed at all between then and NOW? haha.. really.. it really looks like a case of Kim Basinger starring as Kim Basinger!

We found this show extremely average with an anticlimatic ending, but what I want to know is how much they paid that chick to just walk around naked throughout the entire show?! Not much acting skill involved I tell ya!