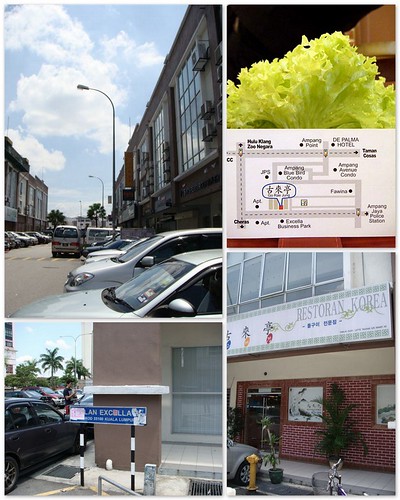 Ampang is an area well known for its large number of Korean expatriates. Koreans in Malaysia have opened restaurants, churches, and grocery stores there, specifically in the area around Ampang Point. We recently went to little Korea, in search of Galbi. 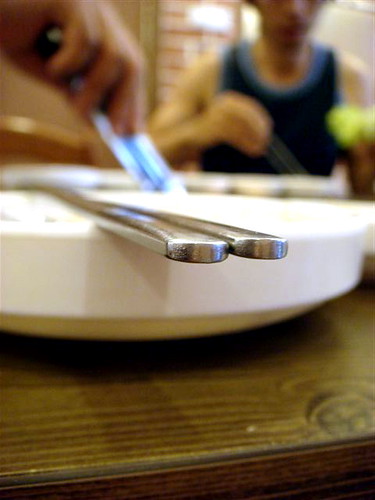 Although called BBQ, Korean BBQ is actually grilled. Bulgogi is thinly sliced beef (or pork or chicken) marinated in soy sauce, sesame oil, garlic and chili pepper, cooked on a grill at the table. It is a main course, and is therefore served with rice and side dishes such as Kimchi. Bulgogi literally means “fire meat.”
Bulgogi is nice, but I find it too salty in Malaysia. The sauce just gets too heavy after a while. 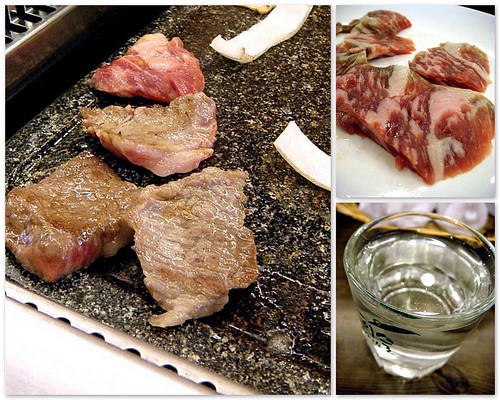 My preference is always Galbi. Galbi is marinated or unmarinated red meat with fat that sizzles once you cook in on the hot plate. In this case, it was hot stone.

Galbi has to be washed down with Soju. Soju is usually drunk in group gatherings while eating, unmixed and portioned into individual shot glasses. It is against traditional custom in Korea to fill one’s own glass. Instead, it must be filled by someone else at the table. This promotes a spirit of ‘thoughtfulness and camaraderie’.

What? Wait? This takes too long.. wails ciki.

When I am in Seoul at dinner, I always have to sit patiently and exercise ‘thoughtfulness and camaraderie’, when in reality all I want to do is to kick my dozing colleague in the shins to get him to pour me another shot. Oey! Wake up! (Just kidding.. my Korean colleagues are really actually rather vigilant and if anyone needs to be kicked in the shins, that would be moi.. yes! I am slow.. neglectful even .. so why can’t they just serve soju in beer mugs, huh? why?) 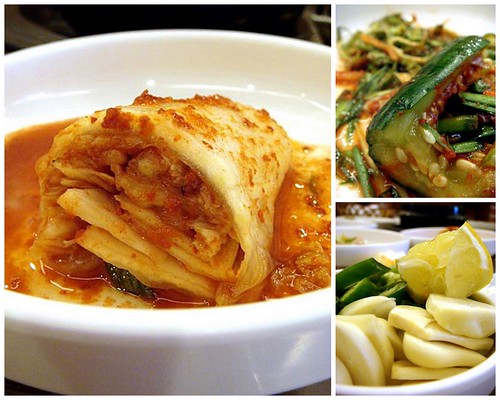 I use to hate Kimchi. It smells like Cumi’s day old basketball socks left out in the rain. Kimchi is a traditional Korean pickled dish made of vegetables with varied seasonings. Its most common manifestation is of the cabbage variety and is the most common side dish at the Korean BBQ.

I like wrapping my BBQ meat in Green leafy cabbage with one layer of sizzling fatty Medium rare beef and tonnes of kimchi and stuffing the whole damn thing into my mouth. Gorgeous.

Traditionally, the greatest varieties of kimchi were available during the winter. In preparation for the long winter months they were stored in the ground in large kimchi pots. Women often gather together in each others’ homes to help with winter kimchi preparations… hmm i wonder if they went home smelling like Kimchi after toiling over that large old pot. How sexy. “Darling get ur cute lil kimchi ass over here… rite now!”

Anyway, one other thing I noticed when I was in Seoul was how my colleagues use to take photos and shout “kimchi” ! in the same way as English speakers tend to use the word “cheese”. (So I guess in Malaysia they should really shout “durian” or “belacan”!.. right, since its so bloody smelly).

I told another Korean friend I liked kimchi. She said “what kind?” , and proceeded to name 50 different subtypes of Kimchi and that’s when I realised that I was truly out of my depth.

Man, these Koreans I tell ya.. they really do love their Kimchi. 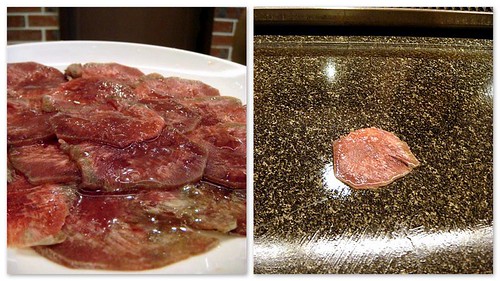 At Go Rae Jung, the food is really just so-so. We found the service hap hazard and the waiters were tripping over themselves (and I don’t mean metaphorically, but literally). Clumsy.

Anyway, a huge must for me at any Korean BBQ, is always the Tongue…

Which reminds me of some really funny cow tongue-in-cheek i read the other day:

All I Need to Know About Life, I Learned from a Cow…
1. Wake up in a happy mooo-d.

3. Turn the udder cheek and mooo-ve on.

4. Seize every opportunity and milk it for all its worth!

6. Honor thy fodder and thy mother and all your udder
relatives.

7. Never take any bull from anybody.

8. Don’t forget to cow-nt your blessings every day.

And last but not least… 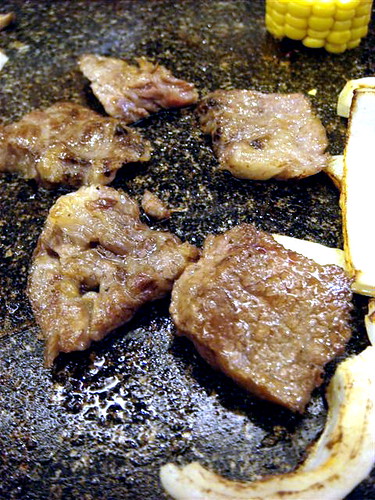 9. When in udder rage, bite your tongue! 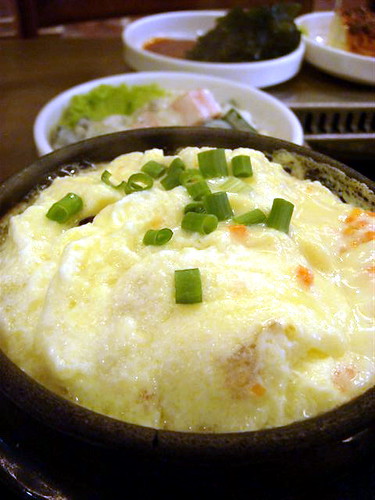 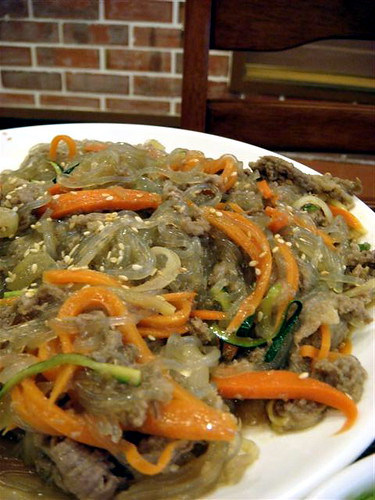 Well, the food was bordering on lousy here – the right photo is a picture of ultra soggy glass noodles, and I therefore recommend you try the Korean in the older parts of Korean Town. We will probably go back to our usual haunts after this. 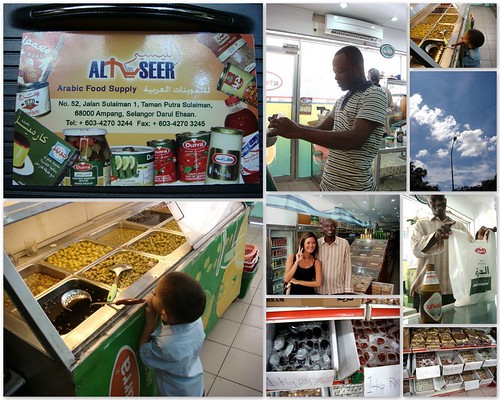 One hidden gem we did find though, was this Arabic Food Supply outlet called Altseer. The food is 100% halal and the olive bar is to die for! I had a field day picking out tonnes of fresh olives for me and my mom. Cumi doesn’t like olives .. so, more for me I say! 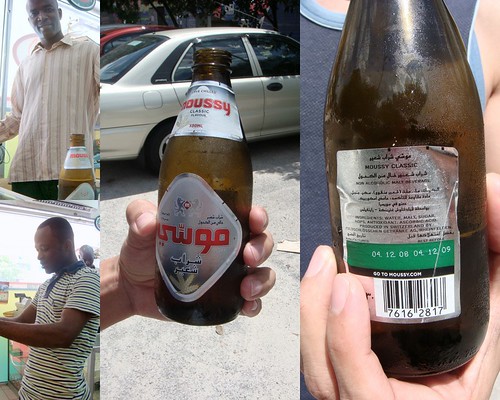 The men at this Arabic Food Outlet are really tall, dark and handsome. I am talking male model material here. They have luminous, flawless, ebony skin and are pleasant and friendly and smile all the time! See the photo:)

Ah, Baklava. We bought loads. Don’t buy these if you don’t like your desserts Flaky, Milky, Creamy and Honey sweet! My love affair with the Phyllo will never end! They also stock excellent non-alcoholic beer here. Moussy Beer from Switzerland. The guy just popped one for us to try on the spot. I told you he was nice. I didn’t think I would hear the day I say this but it was really rather good – tastes just like beer! Minus the buzz. But the bitter, fizzy beer taste.. that’s all 100% there! Amazing. Weird almost.

Back to PJ, cradling my Olives and Phyllo.. and non alcoholic beer .. a great day out I tell ya!

Sunway Giza, that is under the Sunway group has just opened here in Kota Damansara. My colleagues and I drive by here pretty often…