This is a story about our Road Trip to the South of Thailand: The Lenggong – Pengkalan Hulu – Betong Connection! Also covered are our tips on crossing the Malaysian-Thai South Border and clearing customs quickly.

Instead of spending a horrendous amount of money, as a result of last minute year-end holiday planning, we decided on a road trip to South Thailand to satisfy our nosy snouts, our food cravings, our need for culture-exchange and play time! The plan had been to roll on the north south expressway in the wee hours, exiting (no.143) at Kuala Kangsar for highway route 76 passing by Gerik/Grik to Pengkalan Hulu then switching to route 77 which leads us to the border. We ended up starting late morning.

We were hoping to catch a glimpse of wild elephants along the Grik highway but none came in view that day.

We stopped by Lenggong town for a quick break but didn’t have time to visit the Archaeological Museum. Here’s the blue metal tank junk just outside Lenggong town. 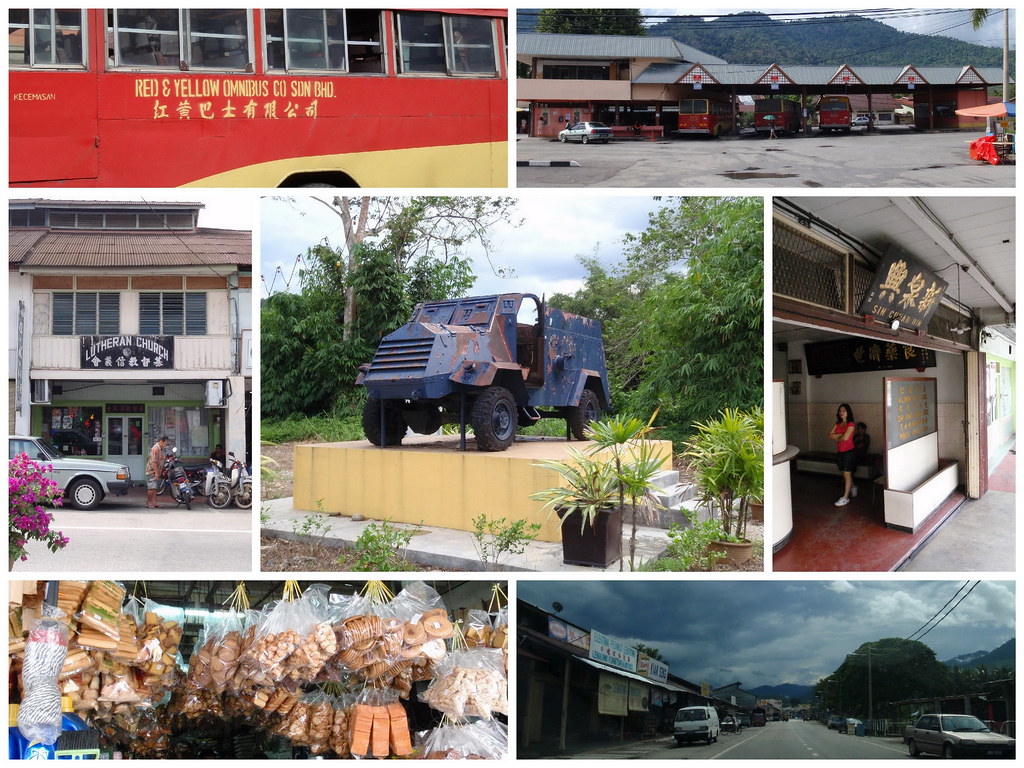 It seems that Lenggong is a popular Archaeological destination in Peninsular Malaysia with many caves of importance(read more here). What a waste.. No time to explore!

Given more time we would have loved to hike up Bukit Kepala Gajah (Elephant’s Head Hill) for Gua Gunung Runtuh (Fallen Mountain Cave) where the archaeologists found the Perak Man – Malaysia’s oldest complete human skeleton found in 1991. The remains of this late 50s man, was dated to have lived over 11,000 years ago. There had been many more artifacts and animal bones found next to him. In 2004, they excavated another complete skeleton from cave nearby called Gua Teluk Kelawar (Bat Cove Cave). A female skeleton known as the Perak Woman apparently died in her 40s and lived over 8000 years ago.

There are many roads, caves and trails spread out in this hilly area. It’s very confusing so if you are visiting, it might be a good idea to find a guide. Pressed for time, we decided to stop at this one cave because you could drive your car right up to the entrance. 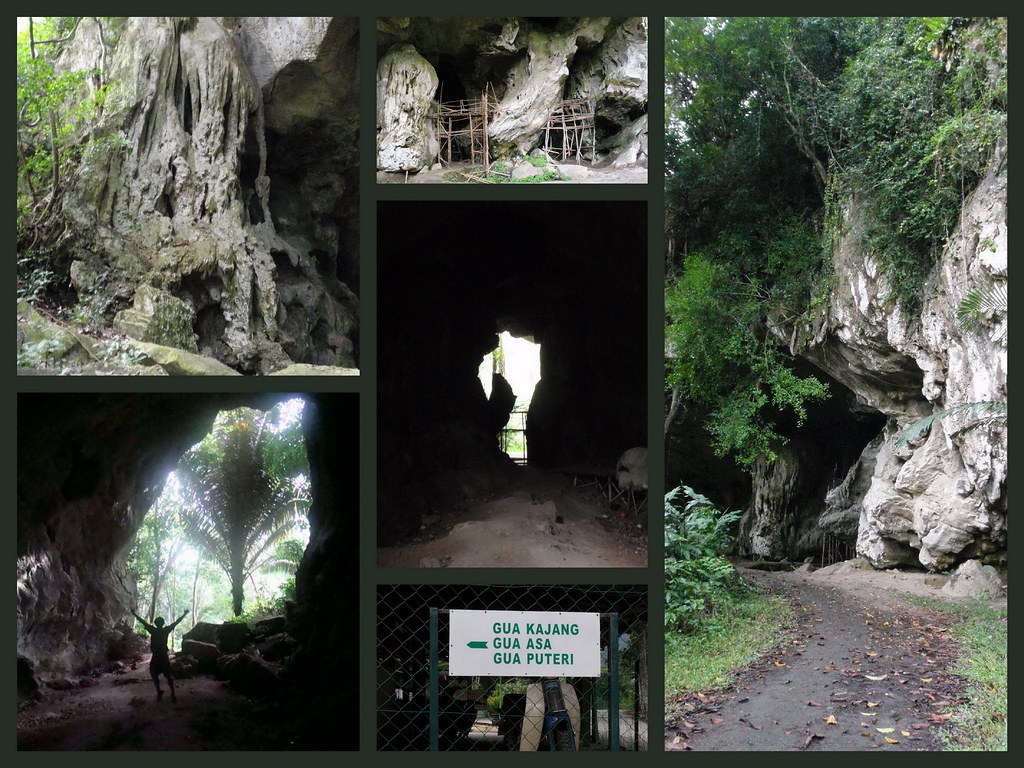 Villagers took the time to build the bamboo structure & platform but never reinforced it as time passed. Kind of reminds you of everything else in Malaysia! I think this is the Asa Cave. It leads us to an open trail at the back.

After quick walkabout in a littered chamber, we had to leave. After another 30 minute drive, we reached Pengkalan Hulu, the town where you can buy your Thai car insurance, exchange your Ringgito to Thai Bahto. We continued on route 77 until the Malaysian immigration & JPJ (Road transport department).. All nicely built and pretty much a quiet riot really. 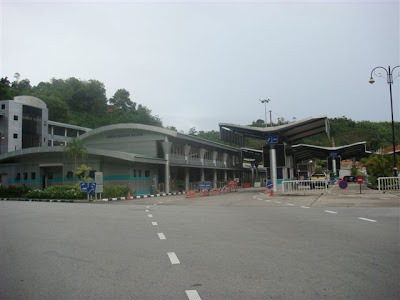 The immigration officers just waved us as we flashed them our vacation smiles. We’re just a lovely couple heading into Thailand for fun and frolic..! NOT sex, drugs & Thai rock n roll!

Ahh.. the Thai Immigration… it was early evening and thank God Thailand rolls back 1 hour so the immigration office was still open. Our earlier online check stated the office closes at 6pm but sometimes it remains open till later during the holidays. The place seemed to be winding down as we arrived. 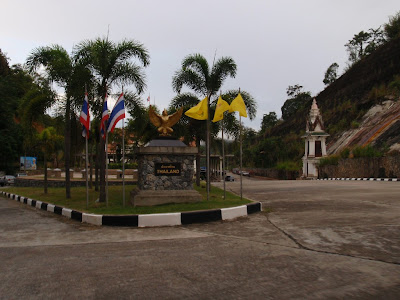 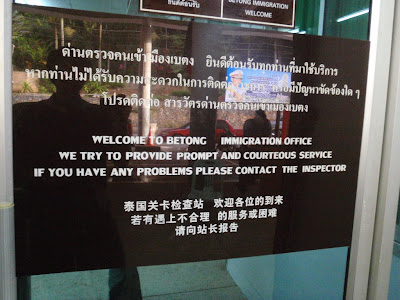 You can review the application process at these booths. 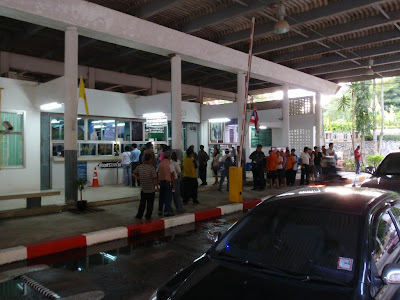 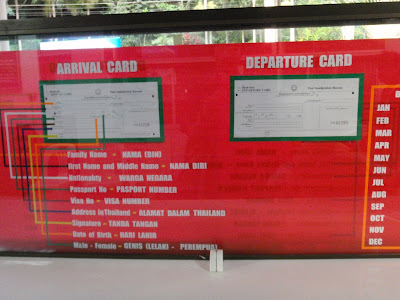 You have to get your immigration cards at an information booth at the start of the building. If you can’t read Thai like us and hate filling up cards, you can pay the eager Thai clerk to complete it for you at RM2 per person. Probably in collusion with the immigration officers. Small fee or not, you decide. 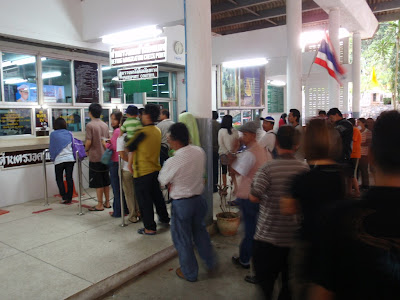 Then you wait your turn on the queue to get your passport stamped and your pretty face registered in their system with the webcam (birdflu/H1N1 screener?). 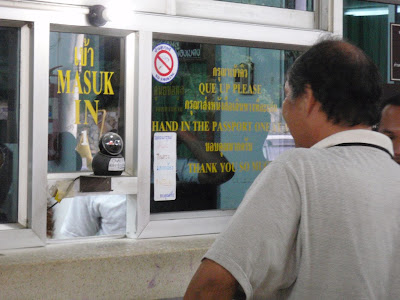 Next, we head to the car registration section, show your car registration paper and the officer will complete the data entry and churn out a Thai declaration form – to declare that you are the rightful owner and not smuggling that particular car in. Costs about RM16. The document is very importanté! You will need to return it when you ‘check-out’ of Thailand at the customs.. otherwise, wave bye-bye to your car! 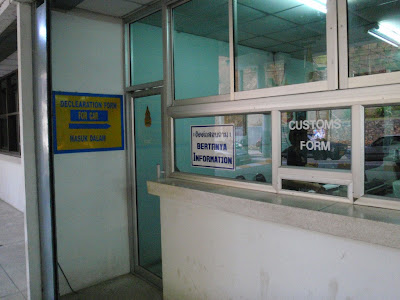 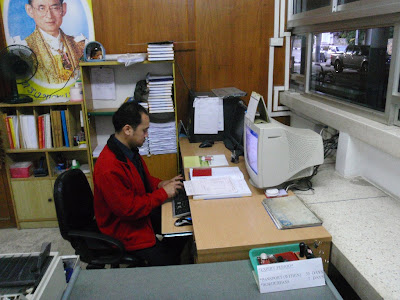 The whole process took about 45mins with some assistance from a few regular border crossers. The Thai’s and the immigration officers weren’t very helpful, preferring to stare, smile and stare. Maybe the language barrier?

Having settled all the paperwork… We are now officially in Thailand!! 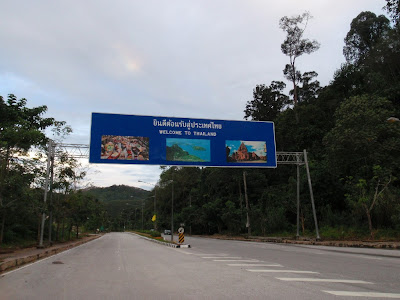 Now we have to race against waning daylight to find a place to stay. 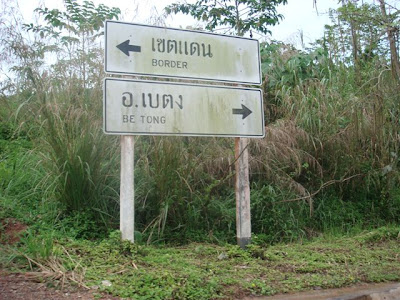 To have some of the silly questions answered, read more…. (oh, yes, this post will definitely span many, many installments.. stay tuned!)

One of the coolest places in Petaling Jaya to visit for fine wines in a relaxed setting is Happer, the wine bar located in Damansara…