I have never been to the states . I was told that if I ever went to California, to get out of LA town, as soon as possible! I was told to visit places like Laguna Beach, Coronado Island in San Diego, La Jolla, Del Mar and Monterrey, San Francisco in the North. When I got there, I realised that the geographical spread of these locations spanned like 500 over miles … and then some. Anyway, in what little time I had, I was lucky enough to cover LA and San Diego.Well.. what can I say… ? I loved LA, but… i left my heart in San Diego… 🙂 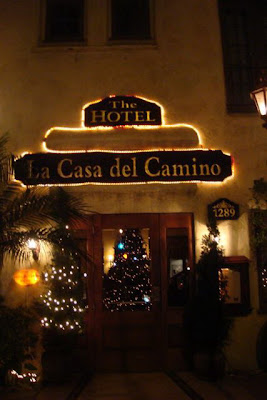 The first night I landed in LA, I had dinner by Laguna Beach. It was gorgeous.. Before dinner, as is the norm for Orange County folks (OK, not all OC folks, but the ones I was with were cool:P), drinks at La Casa del Camino… 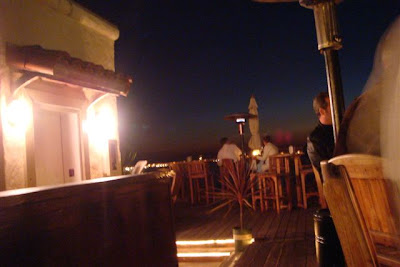 Built in 1927 as a retreat for Hollywood stars (guests included Humphrey Bogart, Douglas Fairbanks and Howard Hughes), this hotel is the classic Laguna Beach experience. Used as a location for the movie “All Quiet on the Western Front” and “Evangeline”, La Casa del Camino is an elegant Mediterranean style hotel with a nice mix of “old-world” charm and modern amenities. 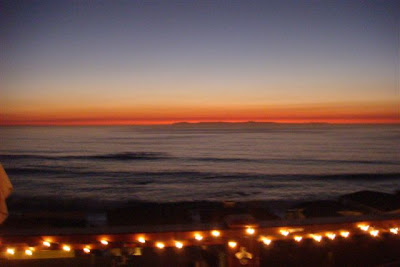 The setting sun was amazing… My camera did not do it justice.. should have brought my tripod… 🙁 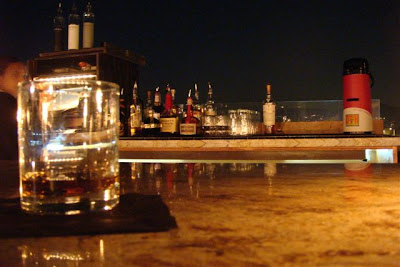 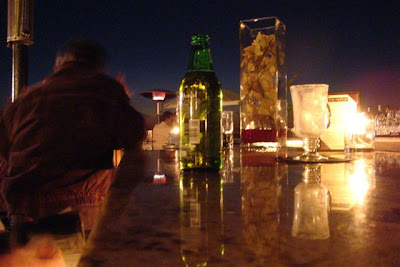 the beer was great, but the cocktails were better!!!

I didn’t want to leave, but it was a TAD cold. Like 10 degrees Celsius. 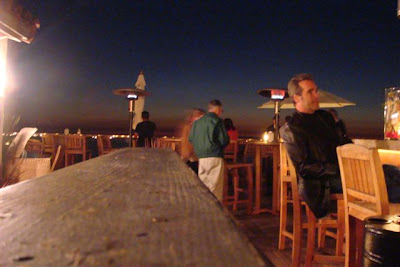 Incidentally, LA is almost never cold. Well, maybe mildly cold.. However, lucky me… being Malaysian and all… landed right smack in the middle of one of the coldest winters they’ve had in years! And on that same weekend, I was scheduled to travel to San Diego, there was a RAIN alert.. ! I mean like, for a place that rains on average, only 8 times a year, San Diego that is, rain is like a BIG DEAL … The news said things like… 3 inches of rain … or 5 inches of rain… imagine! Rain depth measured from the ground upwards… how chronic is that???

Lucky in Malaysia we have such good drainage system and never have to report rain like in California… (not!) ( yes, i am being sarcastic) 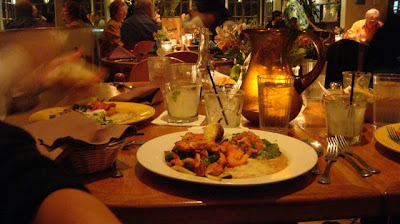 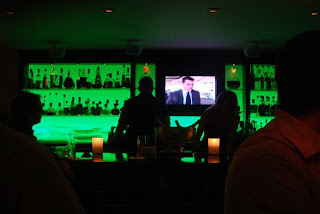 My hosts then brought me to some swanky Mexican joint… but I cannot remember the name because I was busy talking to some people… but as with most Mexican restaurants in the States, they start you off with chips, salsa, and an assortment of vegetables (bell peppers, carrots) covered in cilantro. The chips and vegetables were good, the salsa was a bit on the salty side, but it was still pretty tasty.

As for entrées, I ordered a cheese enchilada and fish tacos. The food was good but not even remotely spicy. Being Malaysian and all, I was expecting their mexican chili to give our chili PADI a run for its money… but no way man. Not even , close.

As it was still happy hour, we ordered our margaritas in jugs, since it was that restaurants speciality.

We were all satisfied with the food. When I asked my friend what he thought of the meal, he said, “It’s Mexican food.” That pretty much sums it up.
After Mexican… drinks… 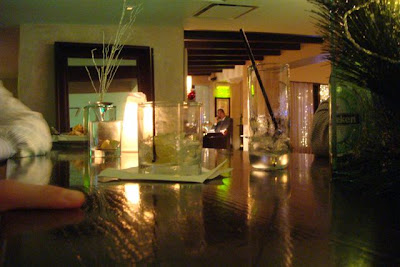 The next morning… I was told that the best remedy for a hangover was a nice big hearty American breakfast… in a dingy trailer diner !!! 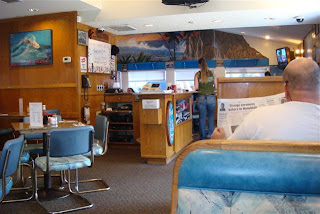 It had baby blue plastic seats and all… 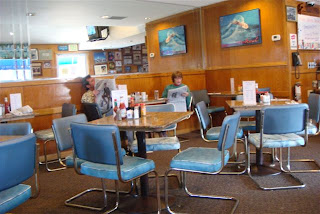 It smelt of coffee , lard, eggs… and some other strange, petrified, unidentifiable aromas…

I had the most wholesome, greasy breakfast you can imagine, and I will just leave it at that 😉
(no pictures to turn your stomach..) 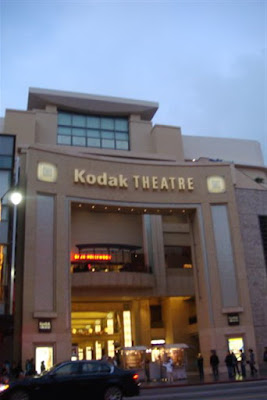 The home of the Academy Awards, the Kodak Theater is the world’s only live broadcast theatre, custom-designed for Oscar Night. The stage measures a massive 36.5m.

Patterned after the grand opera houses of Europe, it is decorated with elegant deep plum upholstery, making it a grand setting for concert, musical, symphony and opera alike.

Did I go in? No… no need la… just watch the Oscars and you can see what it’s like innit? 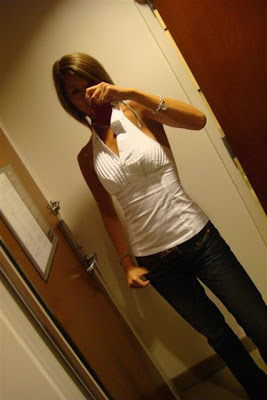 Here’s me.. getting ready for a night about town… I still think staying at the hotel situated right smack on the Walk of Fame was a terrific idea….
just roll out of bed… and roll into fame.. hahaha.. not quite…

I was pretty unlucky… 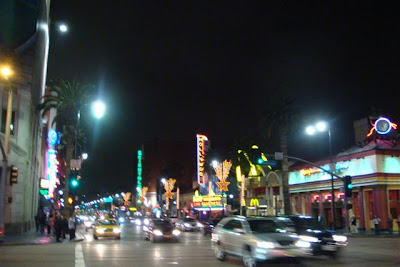 walked all around town…. 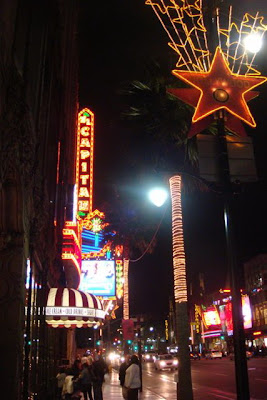 and didn’t even see… 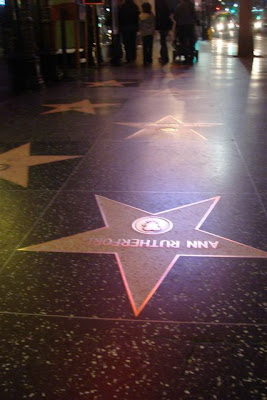 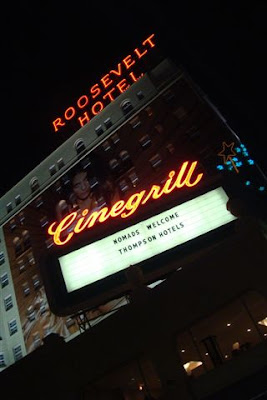 celebrity…! boo hoo… no luck at all man. Like I stopped at the Roosevelt for drinks… no sign of Celebs…

The Roosevelt is a 12 storey, Spanish-style hotel which caters to the Hollywood elite and discerning travelers since its premiere in 1927. After renovations by famed designer Dodd Mitchell, this perennial hot spot boasts sleek mid-century modern style and a enviable guest list that has become a favorite haunt for entertainment business moguls.

Foodies will want to drop by steakhouse-with-a-twist Dakota for roasted pineapple French toast or luscious cuts of prime beef. After dinner, those lucky enough to make it past the velvet ropes can enter Teddy’s, one of the hottest clubs in Hollywood. 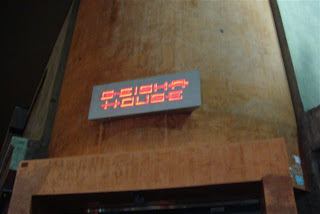 As for moi… , I had dinner at the Geisha House…
Tres chi-chi…The people were friendly, and I made friends easily..

This place is a Modern Japanese Restaurant, Sushi Bar and Sake Lounge that embraces the flavor of traditional Japan while catering to the hip, sophisticated clientele of Los Angeles.

Taking the cue from Japan’s popular sake bars and traditional Geisha Houses of entertainment, GH serves Japanese cuisine as well as fresh sushi and sashimi dishes with a contemporary spin. 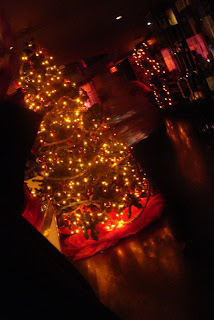 The Christmas decorations were gorgeous, and there are 2 levels of dining, the top floor doubling up as a dance floor with DJ console. Apparently celebs (groan.. not again.. ) are known to hang out here… 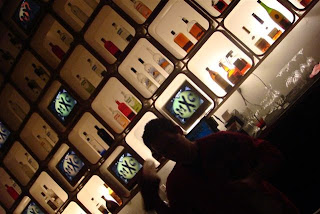 here is the bar… and silhouette of a friendly barman.. and I met some cool Aussies too, who were only too happy to buy me drinks … (hello boys from down under) …

the cocktails were classy and delicious…

and my favourite dish on the menu….
The Marilyn Monroll! 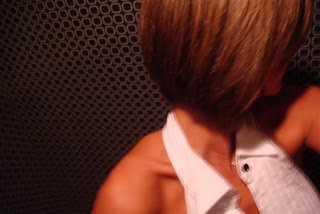 And yes… I think I spotted her (Marilyn) in the crowd… ahem…. ;P 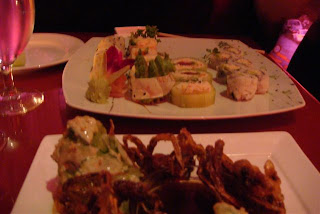 the rolls were spectacular… 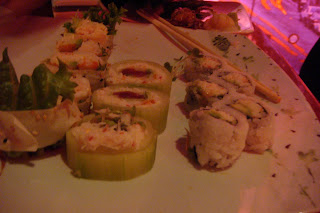 and I was stuffed by the end of the night….

live to eat another day eh?