So two weeks into my trip in Bologna, and I was seeing and experiencing so much.

And one of the names that I kept hearing about, and that folks told me I just had to visit, was Ravenna.

This town is synonymous with beautiful Mosaic tiles, art that was fashioned into the walls of the basilica, back in the days of yore. 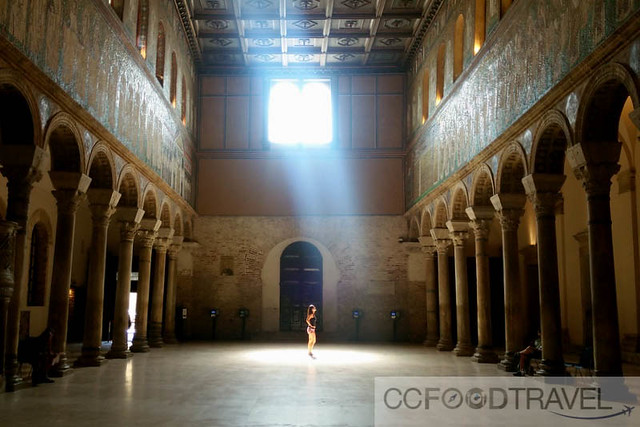 Ravenna also had a rich as colorful history, almost as mesmerizing as its glittering mosaics. In the fifth century, it was the capital of the Western Roman Empire. 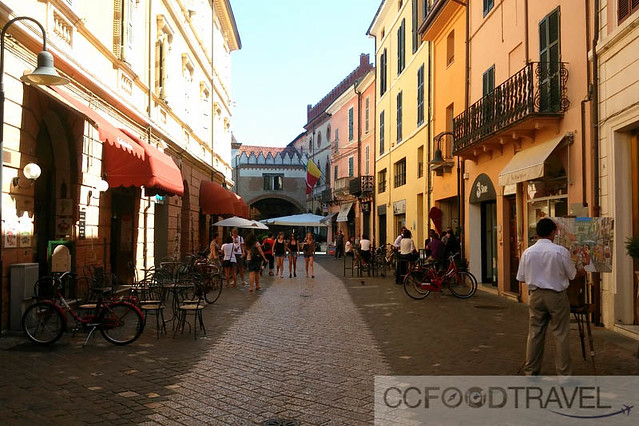 It was ruled first by the Goths, then Byzantine. Later, the town fell to the Lombards in the eighth century, and Ravenna slid into the quiet life, but their mosaics were never forgotten and continued to shine bright. 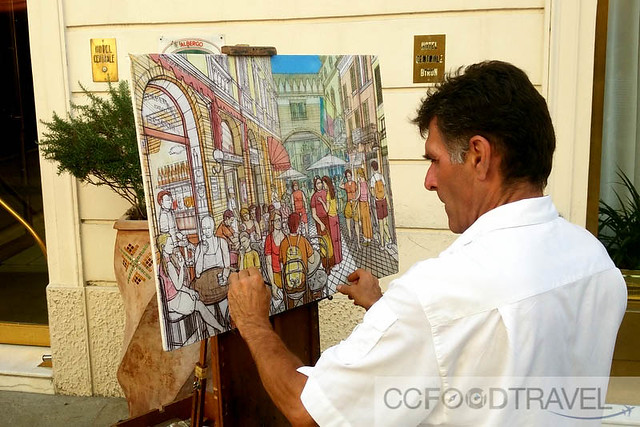 Then came the era of the Renaissance and Baroque, and World War II, but the beauty of the mosaics survived. 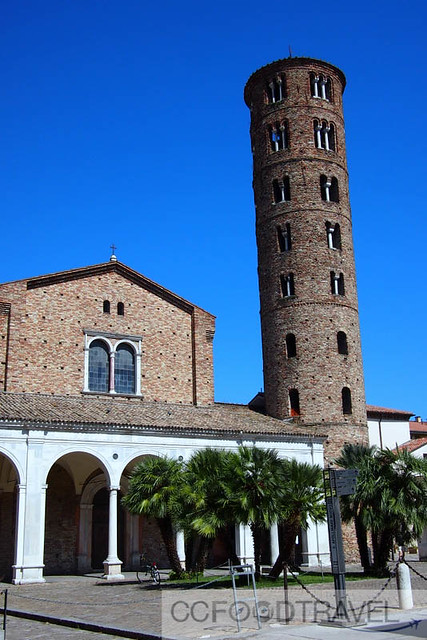 First stop, the Basilica di Sant’Apollinare Nuovo. The basilica’s walls were breathtaking! Covered in exquisite mosaics depicting rows of martyrs, it really took my breath away. We were fortunate that it was less crowded this week and managed to have the place all to ourselves. Well, almost. 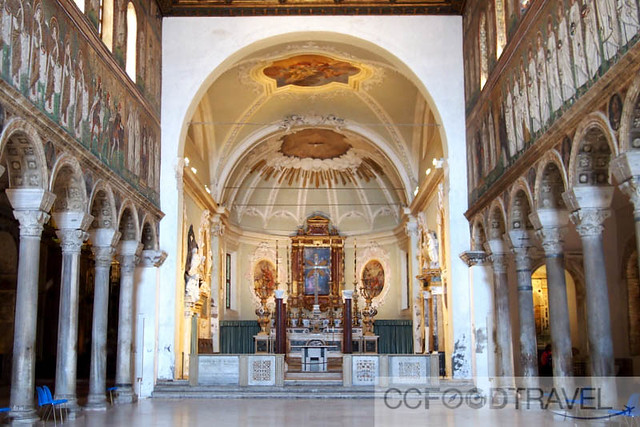 Dedicated to St. Apollinarus (Ravenna’s first bishop), this 6th-century basilica is huge and stretches the length of the nave, telling biblical stories. 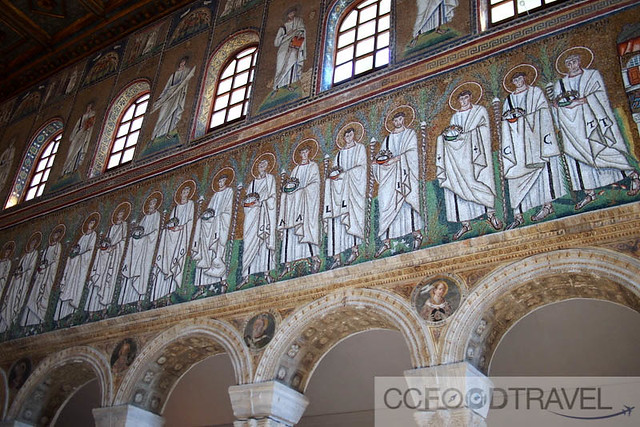 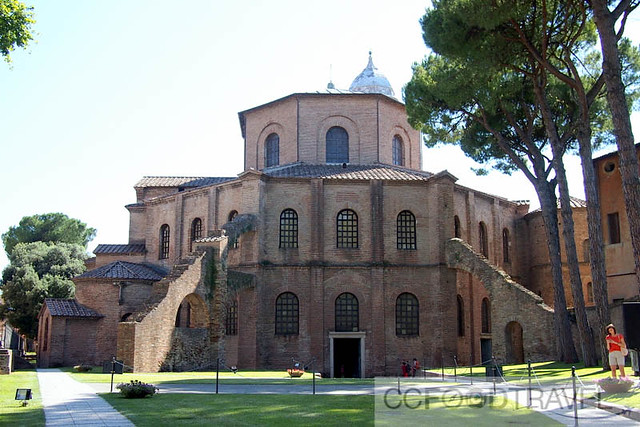 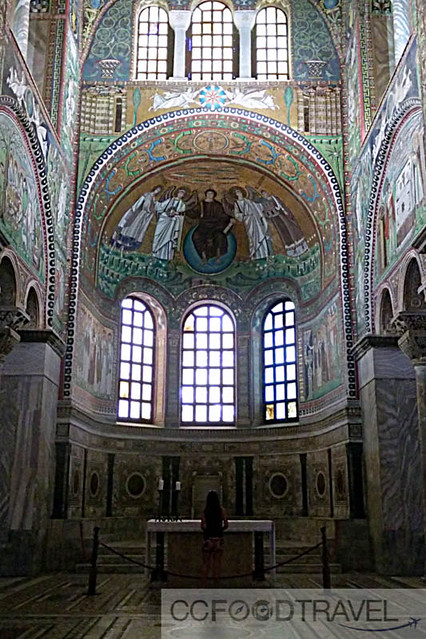 Built in 548 over the site of the martyrdom of St. Vitalis, this octagonal church contains some of the most celebrated mosaics in the West. It has a super high ceiling, bedecked in Baroque frescoes, making it one of the grandest (to me anyway) to visit for mosaics. 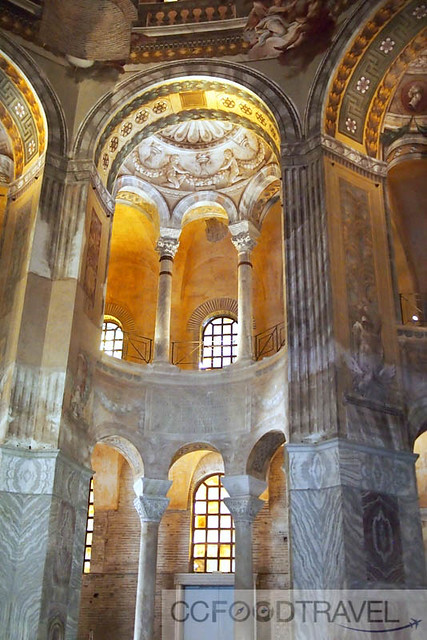 The high domes descending into columns and alabaster-paned windows make it one of the most elaborate basilicas too. 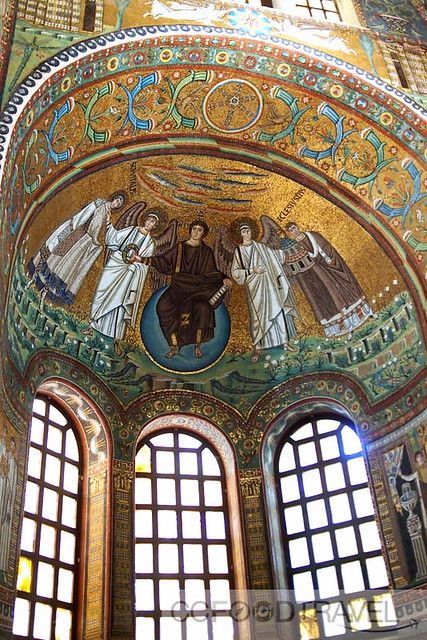 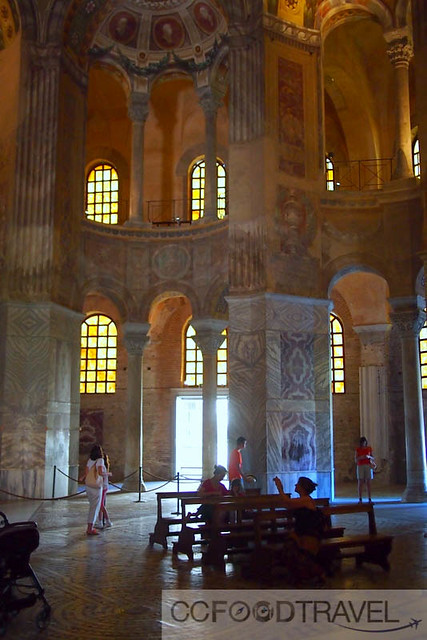 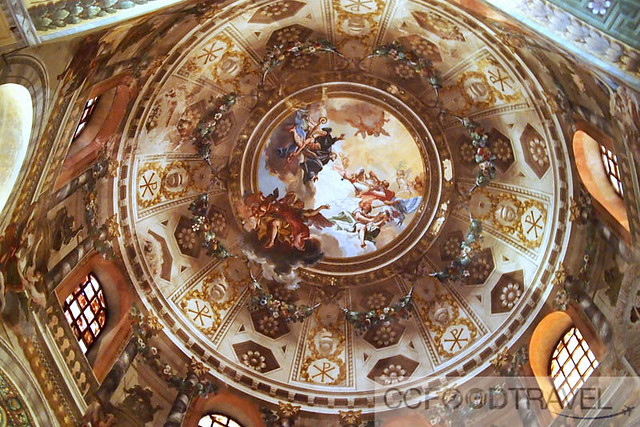 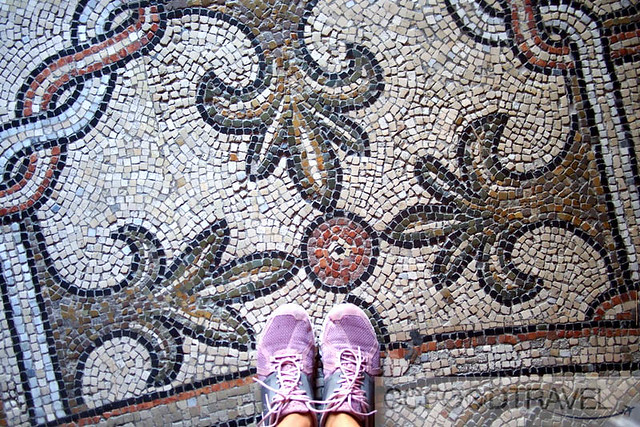 Can’t help but feel dwarfed by the epic ceiling. And as you exit, you will notice, that even the floor are ornate. It’s a pity that while the tiles remain as vibrant since the dawn of time, there’s nothing that can stop them from coming loose – some areas are cordoned off to prevent folks from stepping on the already weakened mosaic tiles. 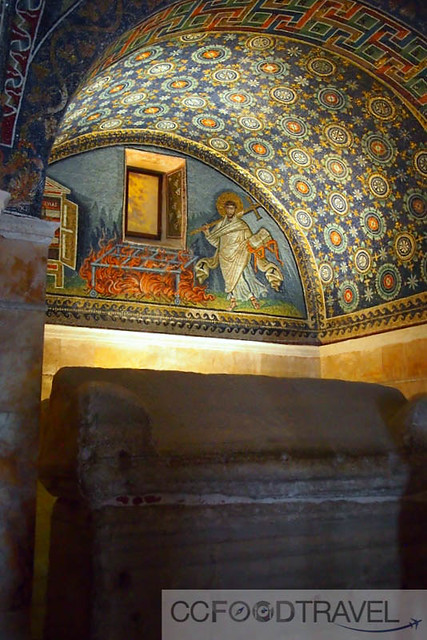 Then we kept on walking till we reached Mausoleum di Galla Placidia. This small brick chapel looked plain and modest from the outside, but simple things have a way on concealing the most astonishing and ornate. 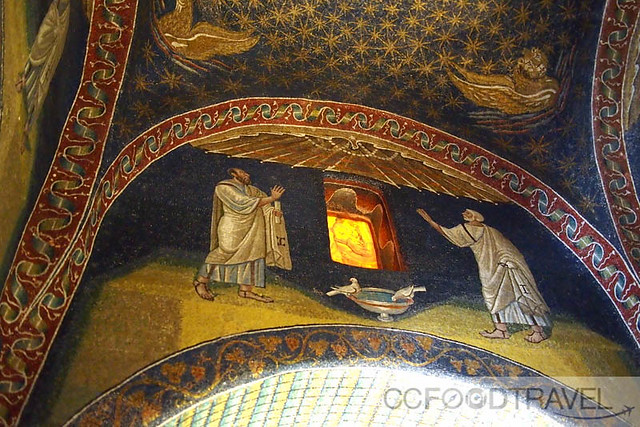 Shaped like a Greek cross measuring 40 feet by 30 feet, it has blind arches on its walls and a square tower over the crossing. 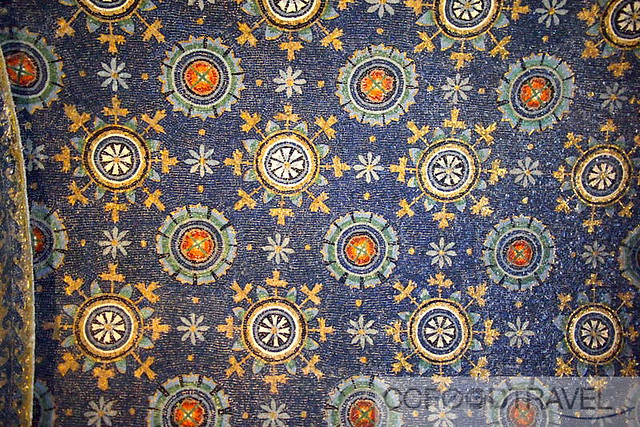 And if you love gazing into the night sky, this basilica will turn your insides out, like it did mine! This place features an amazing mosaic of the starry night sky. The stars (more than 800 of them) are arranged in concentric circles around a golden Latin cross, with the symbols of the Four Evangelists on the spandrels. 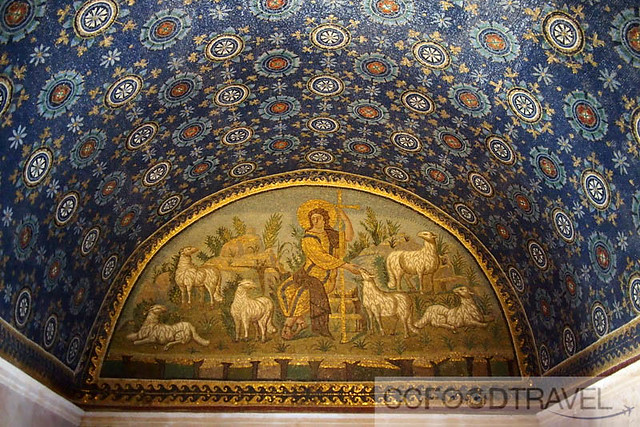 You will also see Christ as the Good Shepherd, with a large golden halo, wearing a royal purple mantle over a golden tunic, and holdng a tall cross. On either side of him are two groups of three sheep, who look peaceful as they gaze up at their Shepherd. 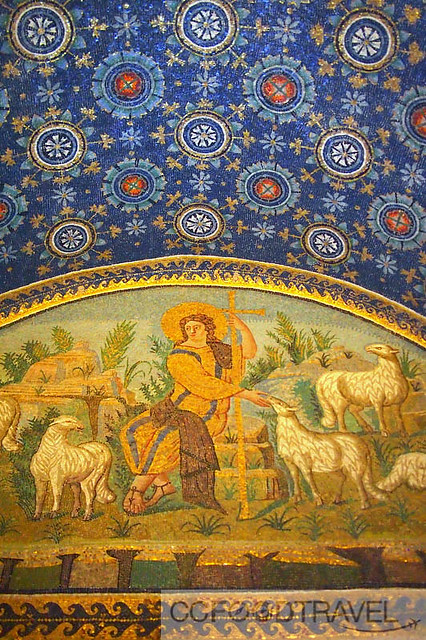 Christ tenderly strokes one of the sheep. This truly symbolizes how Christ knows every single sheep by name, and will seek out the lost, till every last sheep is found – to me, it’s moving and the most poignant of all the basilicas.

The final stop – The Arian Baptistry in Ravenna, erected by the Ostrogothic King Theodoric the Great between the end of the 5th century and the beginning of the sixth century, at the same time as the Basilica of Sant’ Apollinare Nuovo. This place is popular for the baptism ritual of new Christians and Christian births. 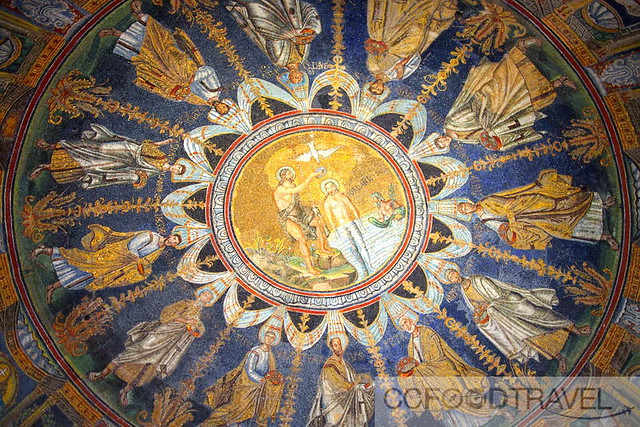 the Baptism of Christ in 5th century Byzantine mosaic

The baptism of Jesus by Saint John the Baptist where Jesus is shown as beardless, and half-submerged in the Jordan. John the Baptist is wearing a leopard skin. On the left stands a white-haired, old man in a green cloak, holding a leather bag. He is the personification of the river Jordan. Above, the Holy Spirit in the form of a dove sprays lustral water from its beak. 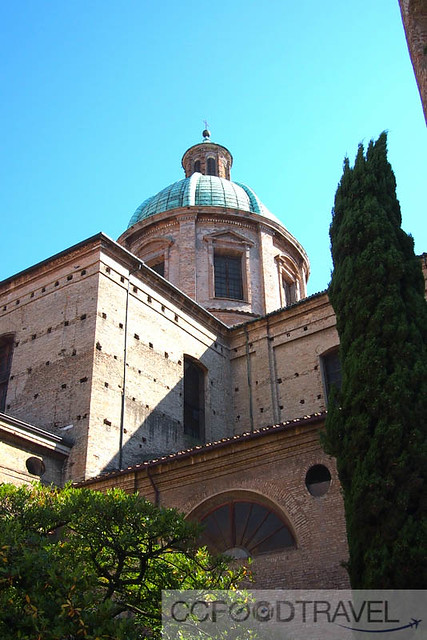 Walking outside on the sunny streets I realised that the rhythm of this unassuming town had just revealed itself to me. Ravenna is a languid place where the shadows of ancient monuments loom, and the whispers of martyrs flit along to walls of the basilicas of a bygone era. Here, life carries on perhaps a little less ostentatiously than in the past, but nevertheless surely, as it did for hundreds of years before.. and for many more to come, I expect.

Opening hours and admission fees The Mosaics of Ravenna (UNESCO World Heritage) Full price € 9,50 – Reduced € 8,50 (valid for 7 days) Single ticket:Archiepiscopal Museum (Chapel of Sant’Andrea and the Ivory Throne), Neonian Baptistery, Basilica of Sant’Apollinare Nuovo, Basilica of San Vitale, Mausoleum of Galla Placidia. Reduced admission: students and organisations entitled to a discount (details). Free admission: children under the age of 10; disabled visitors; residents of the municipality of Ravenna; the clergy; journalists; members of the armed forces; teachers accompanying students on school trips. For groups other than schools, 1 group leader every 20 paying visitors is entitled to free admission.

I normally hate going to any hospital for any reason. However, today, we had to go visit a relative at Prince Court medical Centre…