The ubiquitous Chinese New Year Yee Sang is something most Chinese look forward to. This coming year though, it falls on the 31st of Jan 2014, which means restaurants are already sending out invites to try their Yee Sang, during the month of December. Which brings us to EE Chinese Cuisine at Eastin Hotel, Petaling Jaya. 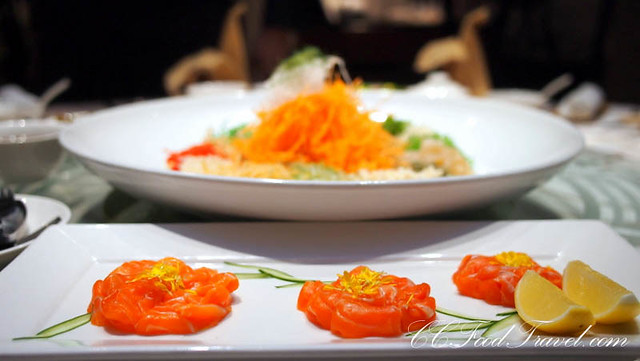 The act itself, of tossing the yee sang high into the air, symbolizes the hopes and well wishes for each other, for yet another great year ahead filled with abundant health, prosperity and happiness. 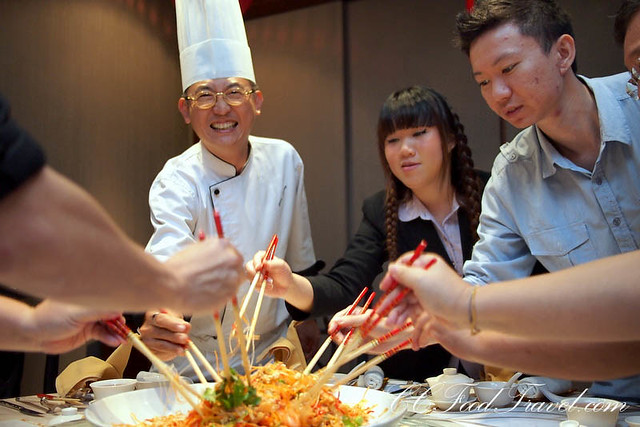 Here at Eastin, the Salmon with Rice Crackers Yee Sang is innovative and super scrumptious. It has a nice addictive element to it – rice crackers. These taste like salted popcorn or rice crispies. There is also a nice healthy element in the form of sunflower, watermelon , pumpkin seeds which add a nice earthy flavour and crunchy texture to the yee sang. 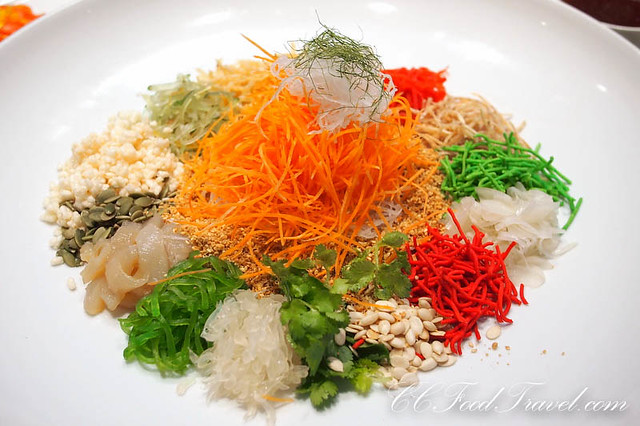 The jelly fish adds some springy bite to each mouthful and the Salmon, a succulent, creamy richness that only the best cuts can impart. Over all, the sauces are not too sweet, in fact, we could actually have done with more of its tangy goodness. 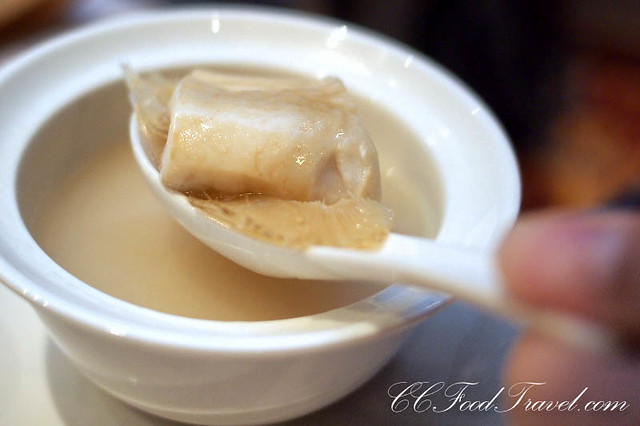 Next up, the Fish Maw Soup. Fish Maw should not be mistaken for the air bladder, which is usually fried, before it is cooked (yue piu). This one served to us in individual bowls, was actually the softer, more prized fish stomach (from deep-sea, cold water fish) , that the Chinese call, the fa-kaw or fa-kao. Priced at RM1800 per 1Kg, this fish maw is the rolls royce of maws, and it comes from New Zealand. The texture is smooth, and creamy, somewhat like that of intestine, minus the smell, and is full of collagen. The deep white, murky color of the soup comes from slow boiling soft pork bones, cartilage and shark bones for 4 hours, followed but high heat boiling for 2 hours. The final result is exquisite. 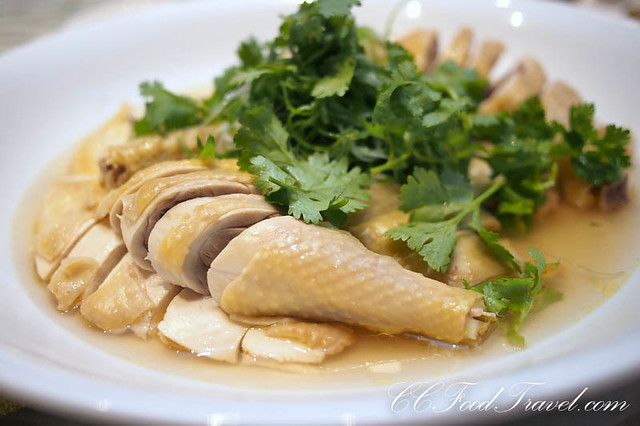 Then came the Stewed Gui Fei Farm Chicken, or the “Princess” Farm Chicken. The chicken was tasty enough but the star of the dish was the dipping sauces it was served with. One sauce was the normal ginger sauce, the other was this green cathartic chili sauce that had us gasping for water – in a good way. 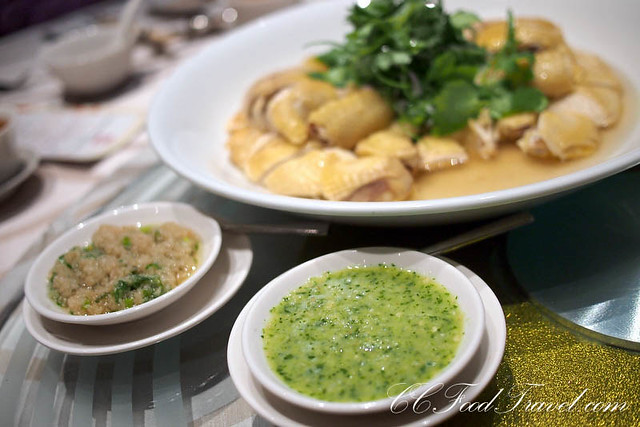 Made with chili padi, garlic, coriander, lime and sugar, this sauce elevated the flavours in the chicken but we were so sure it would do well with any dish, that we kept some for later, to eat with the rice! 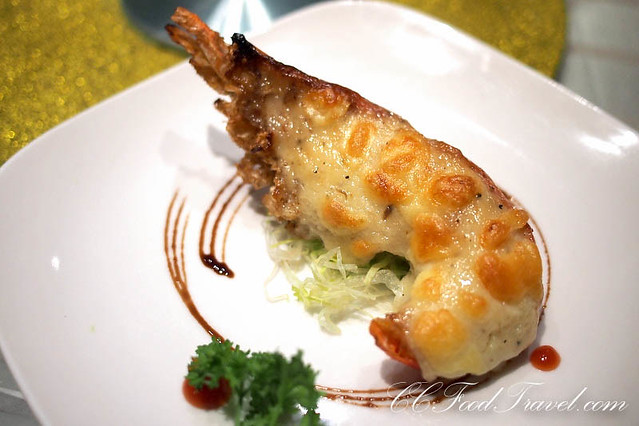 Changing things up a little and moving way from your conventional chinese dishes, we were then served individual portions of the Oven baked king river prawn with cheese sauce. The river prawn was massive – almost like a mini lobster, and it was slathered in a special cheese sauce – a mixture of mustard, vinegar (pak chow) , powdered fresh milk (similar to mayo), cheddar cheese and then baked for 15 minutes. These were farmed prawn from Vietnam we were told. 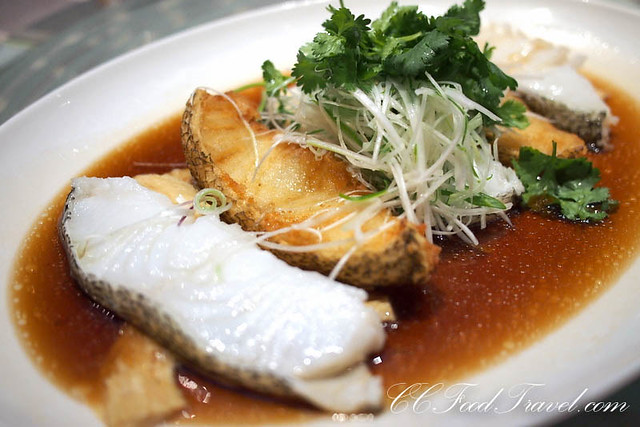 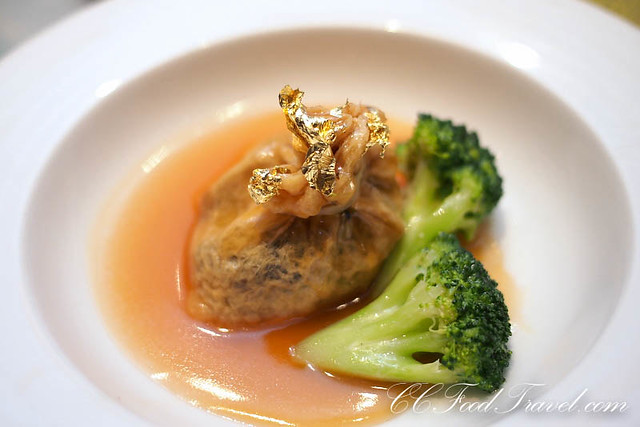 This next dish was my favourite – a lovely gold pouch (Japanese Aburaage skin) which concealed braised Abalone, Sea Cucumber and Dried Oysters.. this was the bomb! We were told by the Chef that he specifically chose the Aburaage for its inari-like skin, only thinner, to make the gold pouch. With great finesse, the gold foil sealed the pouch – a work of art. 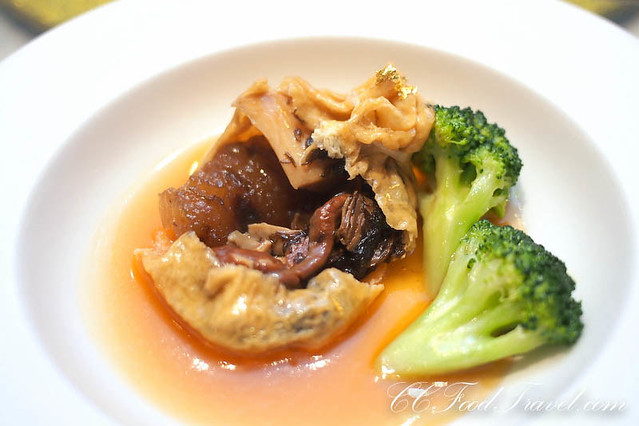 We loved the flavours that exploded out of the pouch once you bit into it. 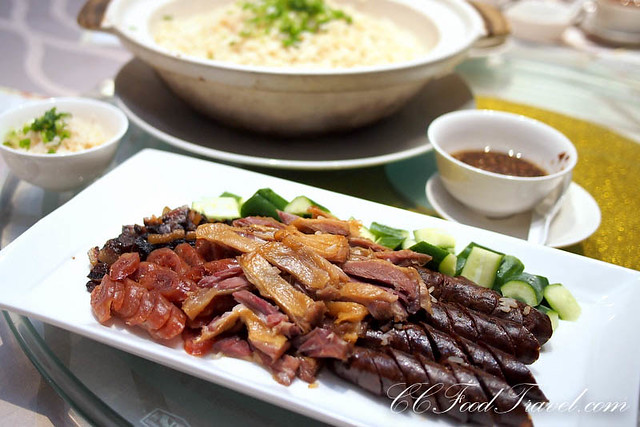 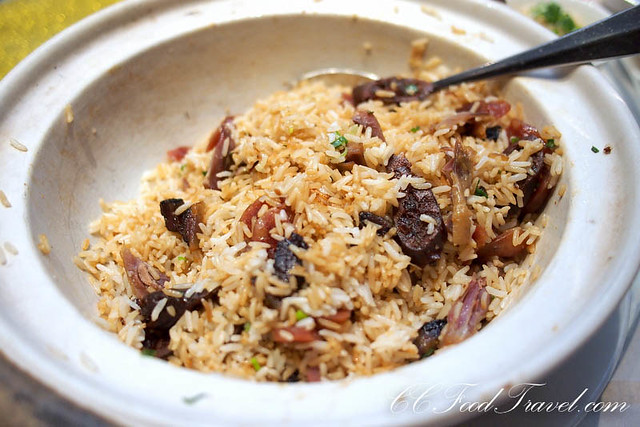 Just can’t get enough.. some had second’s, thirds and even fourth’s! 🙂 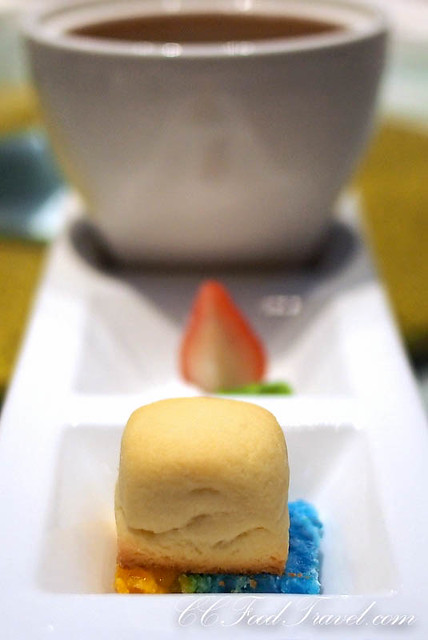 Special Homemade Dessert – a rather colorful & contemporary plating for an interesting trio of  pineapple tart (taiwanese style), a steamed cube of coconut candy : yellow part was custard, and the blue part made from blue pea flower, Strawberry and whipped cream for more color, 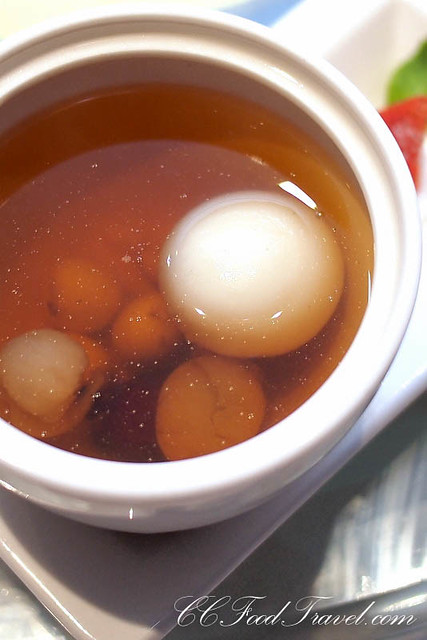 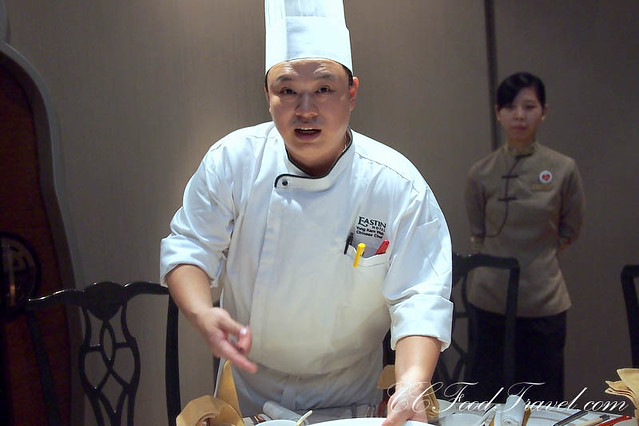 We were really impressed with the food at Ee Chinese Cuisine, Eastin. Will definitely plan to come back for CNY, with the family!

Albion. This place is spanking new. So new that the menu does not have a price list on it yet! The owner was so…