We settle down to dinner at the spanking new Spasso Milano at Pavilion Kuala Lumpur, and as we chat and enjoy the wine, the waiter places in front of my plate, an almost lethally large portion of Risotto Alla Milanese served as the classic Risotto and dressed generously with a fragrant aroma of Saffron. I keep digging into the communal platter until, at last, there is nothing left to shovel. I knew, I was done for.

But if I was going to die, this was absolutely the way to go. I had already sampled Spasso Milano Pavilion KL’s Scamorza Affumicata & Speck Pizza – I’m talking artisanal pizza with Smoked Scamorza Cheese and air-dried Ham whose craggy appearance belied juicy depths of flavours. Then there was the deliciously sharp tasting Citrus Orange Garoupa Pasta, whose fusilli pasta was thick and toothsome, and thoroughly soaked up the orange sauces and heightened its flavours. The resulting combination when eaten with the fresh and succulent Garoupa was terrific. After that would come more.. the Al Pesto with Prima Fileja, a Basil, Extra Virgin Olive Oil, Pine Nut, Parmesan & Pecorino pasta, toss into the warm, vegetal equivalent of a grandmother’s hug. Also a larger than life, Pork Valdostana – Pork Escalope topped with baked Ham and Fontina Cheese which had the comfort of a warm kitchen stool on a cool summer night. If there was any doubt in our minds at all, it was as if Spasso Milano Pavilion KL was telling us that, it was back, and back with a vengeance.

In the end, after the wines, (a fresh and fruity white, the San Angelo Pinot Grigio Toscana Igt – Tuscany, Banfi 2010 and a full structured red – the Barberra D’alba Doc, Pio Cesare, Piedmont, 2008/09) and the desserts that included a Platter of Cheese, Strawberry Martini Fresh Strawberry drizzle with 20 years old Balsamic Vinaigrette, a heavily Alcoholic Tiramisu, and 3 different types of Gelato, I survived. How could I have done otherwise?

I am, however, willing to risk death for a chance not only to eat real, true authentic Italian food but to eat it often. One can never have too much good Italian. Like I’ve said before, I was going to die, this would absolutely be the way to go. I have long been a fan of Chef Felice’s cooking and will continue to be, for a good while yet. With big guns like Italian Manager Angelo and Italian Chef Felice helming the kitchen, I know I am in good hands.. Spasso Milano Pavilion KL will probably end up being one of my favourite hangout joints. And with the availability of Wifi, why not. Yes, I could end up spending my evenings here, too easily. 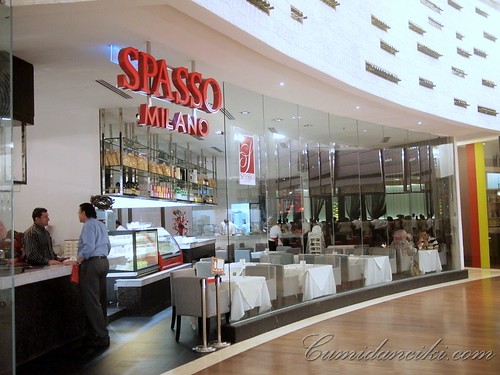 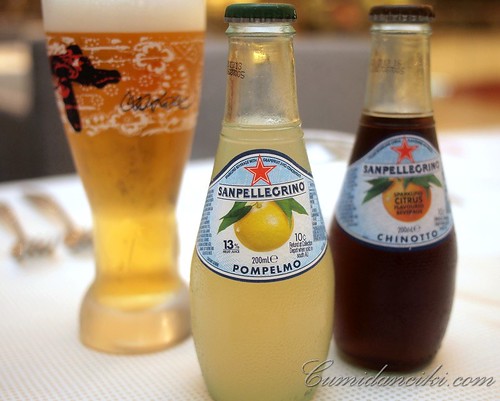 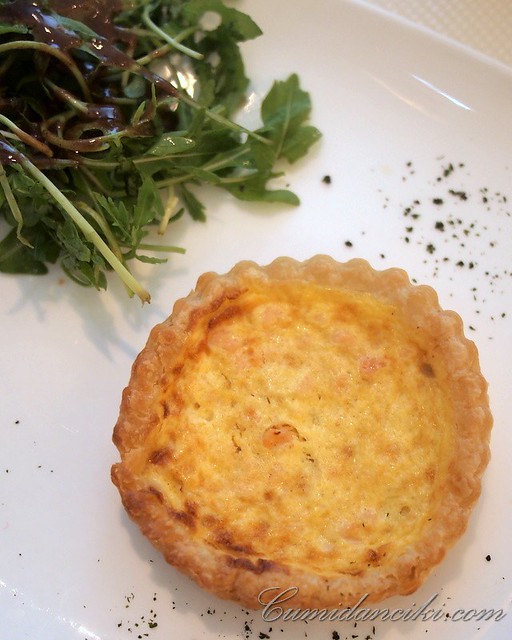 The smoked salmon torta was just OK. Not a memorable dish. 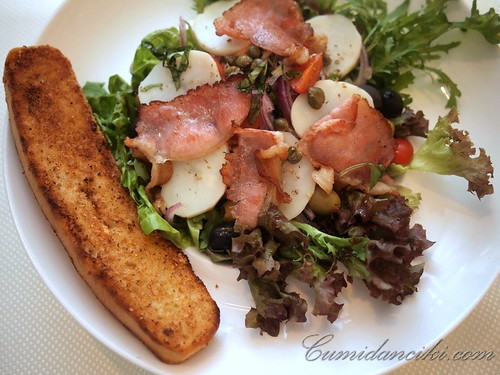 One has the option of adding either smoked salmon (RM8), pesto flavoured chicken(RM6) or bacon strips(RM6). This salad was a little frail. We were not overly excited about the salad. 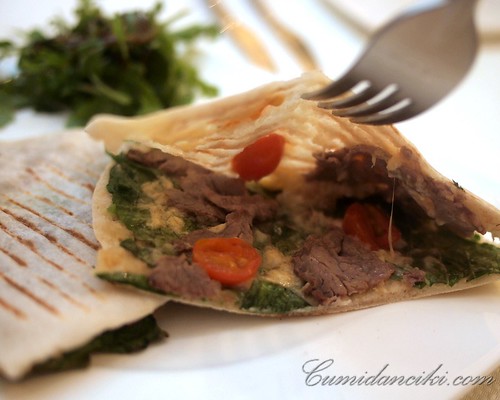 The meaty wagyu was to die for.. but the portion of meat per panini was small, and overpowered by the sauce in the panini. I would have loved mine bursting with Wagyu, but who wouldn’t? 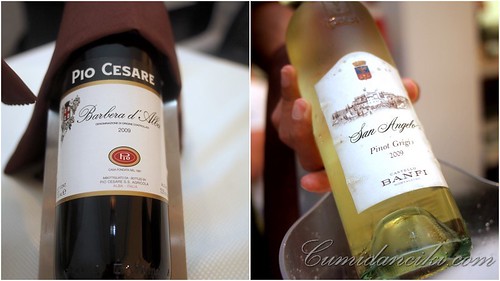 Two great wines that were versatile and complemented the various different dishes we had that night. Of particular note, was the Tuscany Banfi 2010 – an amazing white wine that really brought out the flavours of the dishes especially the speck in our pizza. A fabulous, intense, fruity aroma, followed by a rich, refreshing flavour, and then a clean finish. Well matched indeed. 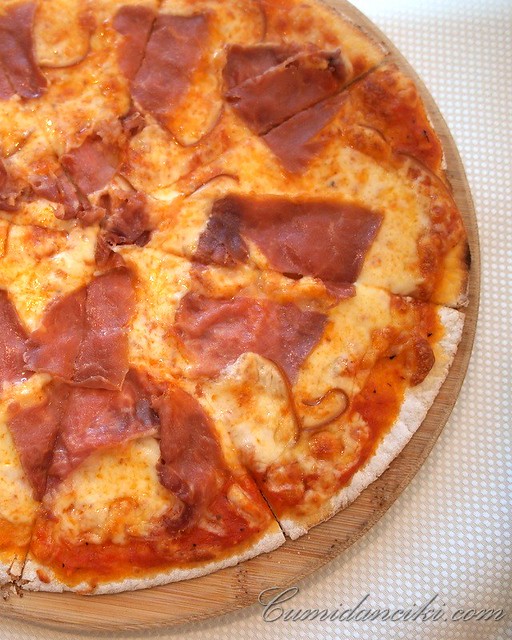 Indiscriminate gluttons and discerning gourmands alike have long been crazy for pizza. But over the last few years, they have elevated their passion to a vocation, sending pizza into a whole new stratosphere of respect. This pizza at Spasso Milano KL, could be one of the best pizzas I’ve eaten in a long time probably due to the tastiness of the speck and the chewy texture of the dough. Speck is a distinctively juniper-flavored ham originally from Tyrol, a region that partially lies in Austria and partially in Italy. Speck’s origins at the intersection of two culinary worlds is reflected in its synthesis of salt-curing and smoking. (That’s probably why Cumi found it too salty.. but no worries, just wash it down with more wine!)

Scamorza is an Italian cow’s milk cheese, similar to mozzarella. I found this stretched curd cheese, rather interesting – extremely tasty and complemented the speck magnificently. 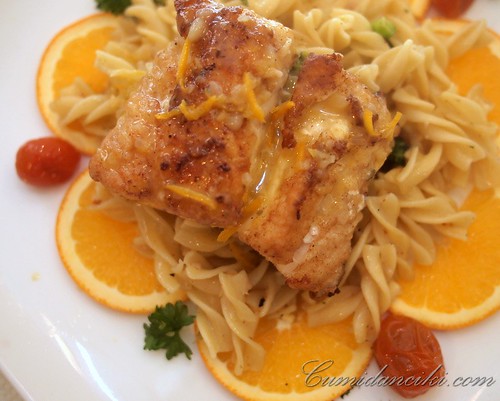 This pasta fusilli was cooked al dente.. just right. The sharp tasting Citrus Orange Garoupa Pasta, whose fusilli pasta was thick and toothsome, and thoroughly soaked up the orange sauces and heightened its flavours was one of my new favourites for the night. The resulting combination when eaten with the fresh and succulent Garoupa was terrific. 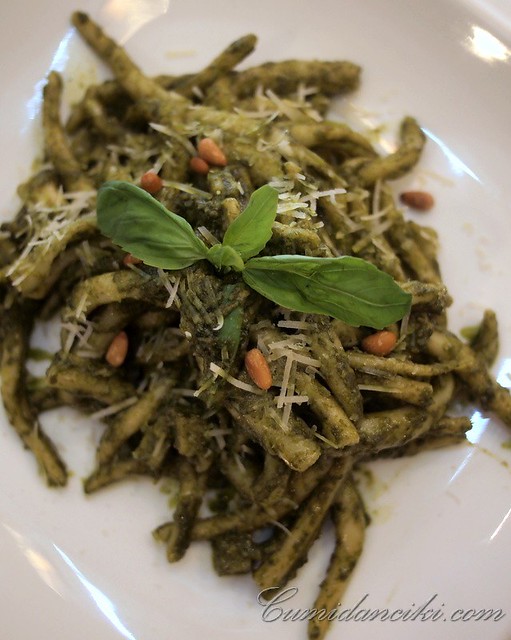 Pine nuts are one of my favourites when served up with a pesto variation of pasta, and the Al Pesto with Prima Fileja, a Basil, Extra Virgin Olive Oil, Pine Nut, Parmesan & Pecorino pasta was comforting indeed – toss into the warm, vegetal equivalent of a grandmother’s hug! 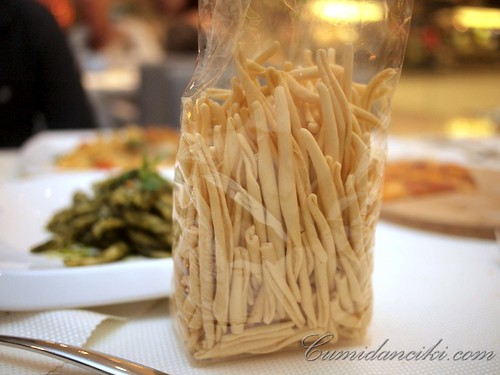 Fileja is a traditional Calabrese pasta ‘fatta in casa’ (usually made in the home). It is similar to pici (Toscano) and various other regional styles of egg-less pasta that are rolled by hand. This pasta has a starchier and softer texture to it, than the fusilli pasta. After a while, it gets a little heavy, especially eating it with the rich pesto dressing. It’s still a close second to the fusilli pasta dish though. 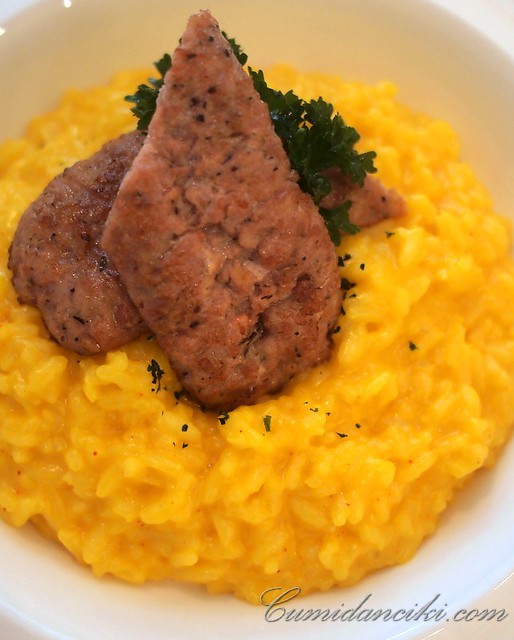 Risotto is the ultimate in Italian comfort food – warming, satisfying and incredibly tasty. The risotto at Spasso Milano is to die for! Loads of saffron, and it has the perfect texture. At Spasso the risotto has a rich, creamy texture, with each individual grain of rice standing out clearly and having a hint of a bite, rather than being soft or mushy.

This is my ideal risotto. Some might beg to differ.. Tough! 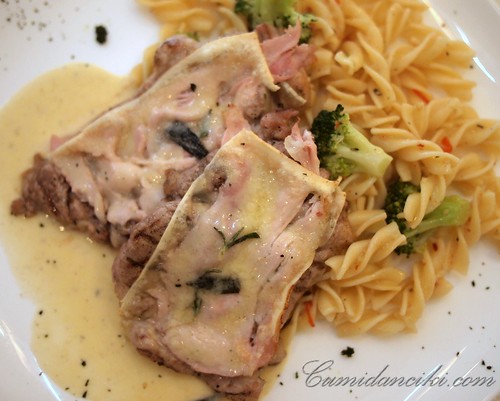 Pork lovers, rejoice! This succulent strip of pork escalope is a real show stopper, especially since it is wrapped and baked in Ham and Fontina cheese. Crazy delicious – pork wrapped in pork.. just wrap your mind around that;) 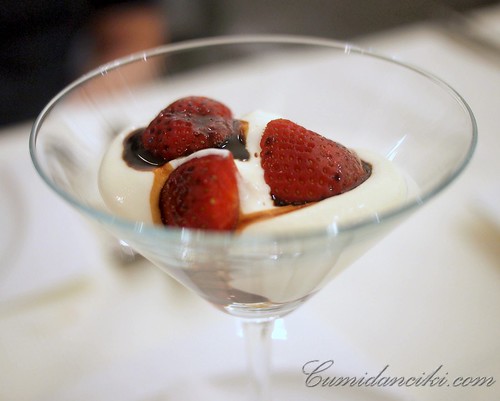 The 20 year old balsamic vinaigrette really stole the show. How do you describe an aged balsamic? Sweeter, thicker and more full-bodied. Very impressed with this dessert. 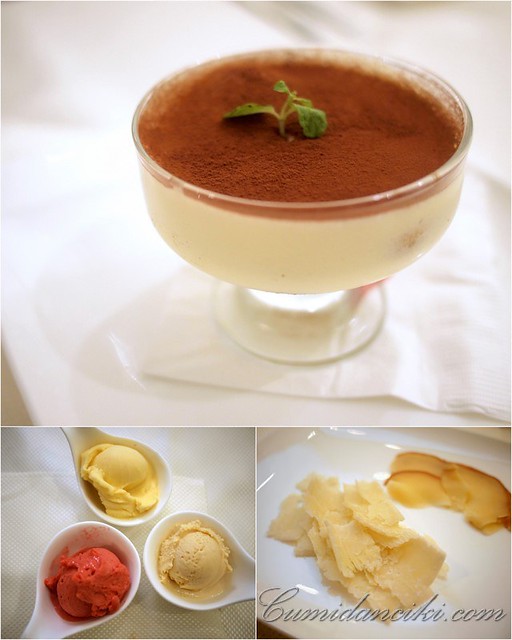 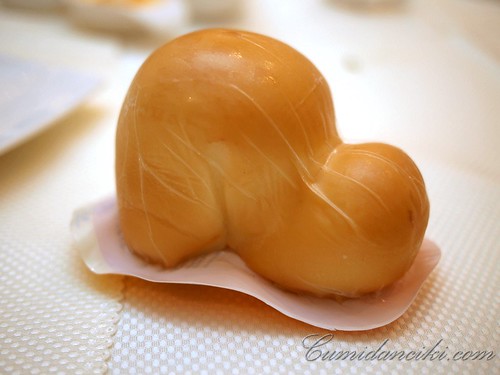 As with the pastas, artisanal cheeses are also on sale, at Spasso Milano. The smoked Scamorza cheese, is a terrific cheese to have on its own with wine. We learnt that the fresh curd matures in its own whey for several hours to allow acidity to develop by the process of lactose being converted to lactic acid. Artisanal cheesemakers would generally form the cheese into a round shape, and then tie a string around the mass one third of the distance from the top, and hang to dry. The resulting shape is pear-like. This is sometimes referred to as “strangling” the cheese.

As you would have already noticed by now, Spasso Milano has made some changes to its menu. For a start, it is now a strictly non-halal menu, with a myriad of pork dishes to choose from. I for one, love this change. The food is still excellent. For the time being, they have done way with the afternoon buffet lunches that made them famous (antipasti buffet for just RM18++ ), that they used to have at the old Spasso, but who knows.. they might introduce a *variation of that, one day soon.

All in all, a great dining experience. Highly recommended!

( *Update: the antipasti buffet are now priced at RM28++ at the new Spasso Milano. I can’t wait to check it out!)

So the first visit to this area in town, brought us to the famous Ring Road restaurant, famed for its fish head noodles. Dissatisfied…