At the recent, Flavours of Chile event at the Westin Kuala Lumpur, we were invited on a gastronomic journey that explored the heritage and cuisine of one of the world’s most inaccessible countries. Cut off from the rest of South America by the Andes and the Atacama, Chile has its own unique cultural identity which combines ancient traditions with an ultra modern and progressive way of life. Thanks to the boom in Chile’s wine and agricultural industries it has also become a gastronomer’s paradise with breathtaking scenery en route. 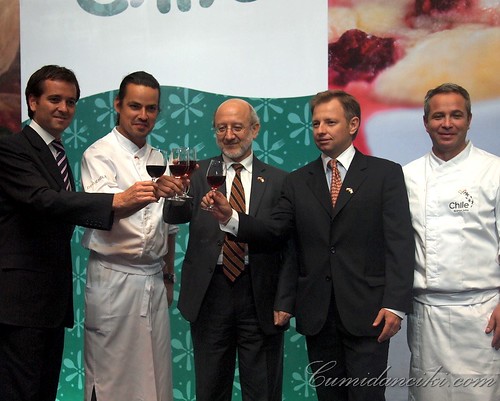 At the event, some of the interesting facts highlighted to us were that Chile, known as The Thin Country, extends along the Pacific Coast of South America, from the rain forests of Patagonia in the South to the desert of Atacama in the North. The cosmopolitan capital of Santiago is edged by the snow-capped Andes Mountains. Roughly six million residents live in the capital, or almost half the population of the country.

Spindly Chile stretches over 4300km, from the driest desert in the world (near San Pedro de Atacama) to massive glacial fields. Along the way, the landscape is fascinatingly varied with volcanoes, geysers, beaches, lakes, rivers, steppe and countless islands along the way, to thrill the adventurous traveler. Chile is just breathtakingly gorgeous and has amongst the world’s most spectacular sweeping deserts, craggy summits and lush forests and fjords in its backyard. 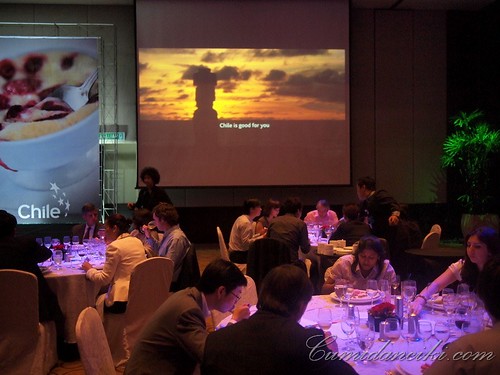 A trade delegation of more than 15 Chilean firms led by the Chilean Export Promotion Bureau (ProChile) was held at the Westin Kuala Lumpur on November the 10th and 11th to establish business relations with Malaysian companies. This two-day Flavours of Chile event, was hosted by ProChile and the Embassy of Chile in Malaysia. ProChile director Felix De Vicente, felt that this would be an ideal occasion for Malaysian businessmen to discover Chile’s wide variety of high-quality products. We were invited to attend a rather grand dinner on the 10th of November to kick off this event.

The video presentation on Chile was not only rivetting, it made me want to pack my bags and head to Chile! Not only that, as our dinner courses were served, the Chef introduced us to each dish and how he made it, via the video presentation.. and damn… the charismatic and super talented Chilean Chef Carlo von Mühlenbrock looked like a moviestar! This was a really cool touch I thought, as it was all pre-filmed. It was like being in the kitchen with him, so we knew what went into each dish;) Anyway, on to the food. 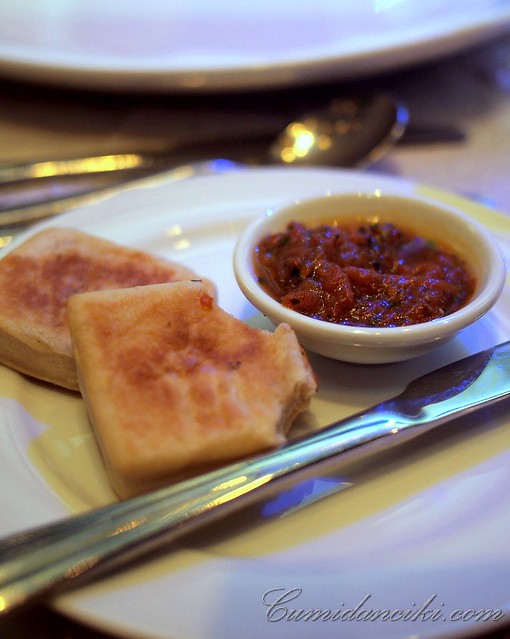 At the pre dinner cocktail session, a well-made pisco sour which Chileans fiercely defend as theirs, not Peru’s, started the night off quiet nicely. Guest mingled and chatted over these pisco sour champange flutes and also some refreshing Chilean wines, such as the Cabernet Sauvignon-Vina Santa Carolina, served with finger food. Later, there would be a great selection of Chilean wines to choose from, to accompany the dinner. These square, dangerously appealing little breads (in the photo above), warm from the oven and served with some hearty Chilean tomato dipping sauces, were the meal’s opening salvos. 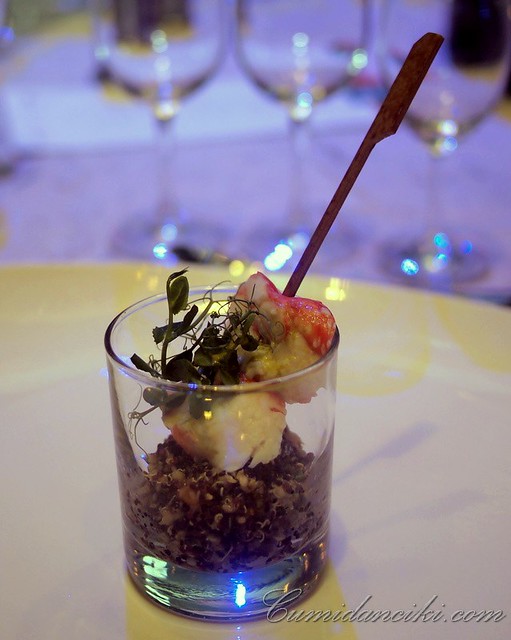 The Quinoa Timbale with Avocado and Chilean King Crab that was paired with a Chilean Sauvignon Blanc was to die for. The highlight was the unexpectedly delicious quinoa – it was sour and tangy as it had been prepared with a vinaigrette and it totally knocked the flavours of the king crab out of the park. Talk about marraige made in heaven. Looked like Chef Carlo von Mühlenbrock was going to be my new hero. 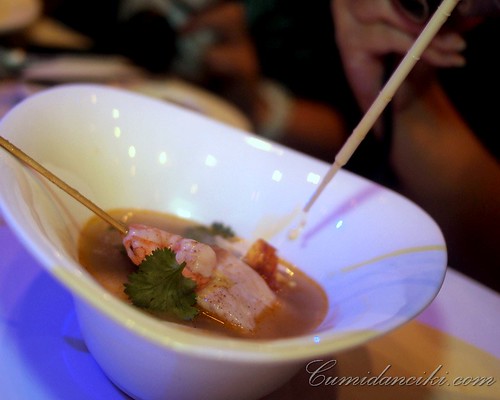 In the storm-tossed
Chilean
sea
lives the rosy conger,
giant eel
of snowy flesh.
And in Chilean
stewpots,
along the coast,
was born the chowder,
thick and succulent,
a boon to man.

You bring the conger, skinned,
to the kitchen
(its mottled skin slips off
like a glove,
leaving the
grape of the sea
exposed to the world),
naked,
the tender eel
glistens,
prepared
to serve our appetites.

These lovely poetic words of the great Pablo Neruda, a famous Chilean poet was what in turn, inspired Chef Carlo von Mühlenbrock to create this next dish. The conger eel which is referred to as the “grape of the sea” is served up in this heavenly bowl of seafood soup. But the ritual is not complete without some interactive elements to it. The ingredients lie dry at the bottom of the bowl, then a soup kettle pours a steady stream of hot broth over the contents. The final touch is added by us, the diners -we are told to squeeze the cream from a small, slender, plastic pipette into the soup. Unctuous and rich.. I honestly felt the flavours of Chile wash over me, and into this bowl of murky seafood soup. This dish paired perfectly with an earthy Chilean Chardonnay. 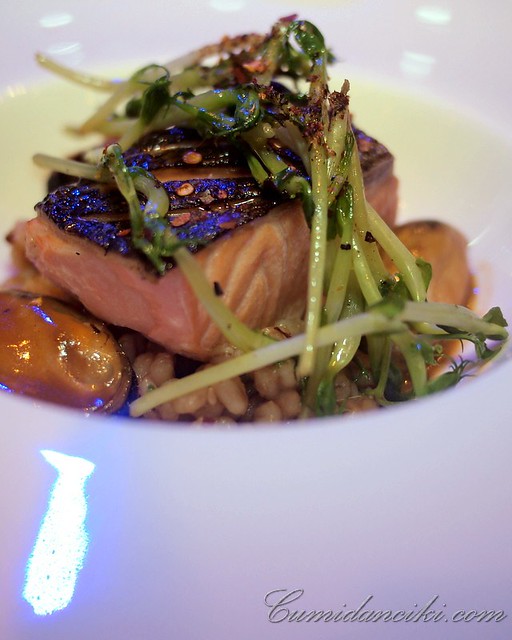 You can’t go wrong with Salmon but I felt that the smoky mussels rather overpowered the fish. The coriander-flavoured barley pearls were delicious! I wish that instead of eating carbs, i.e. the dreaded “white rice”, I could always substitute my meals with this or the quinoa prepared in the same way above, instead! What a cool idea huh? This fish dish paired well with a Chilean Pinot Noir-Vina Cono Sur. 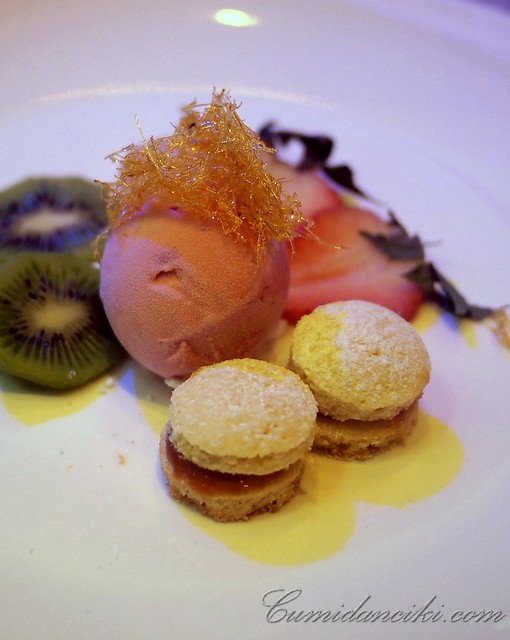 Dessert was a great way to end this dinner – sorbet, made from pureed Chilean berries. Sweet and creamy. All in all a great night. I was particularly glad to have met the Chef outside and gotten a few minutes to talk to him. Chef Carlo von Mühlenbrock is a really humble and down to earth guy. It’s a great thing his cooking is so terrific as well. I hope to visit Chile in the not too distant future – after all, even from this rather brief introduction, I can tell that the ‘flavours of Chile’ that await, will be worth it! 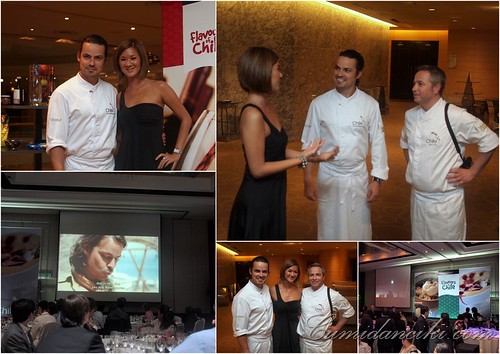 Ciki talks to the Chefs 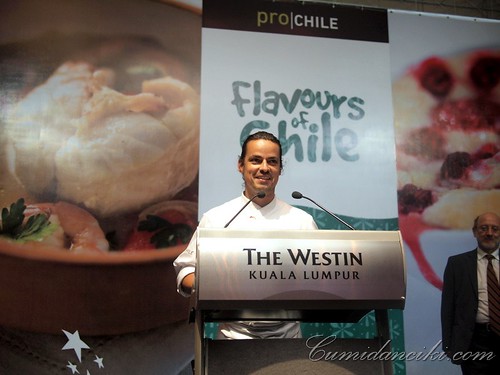 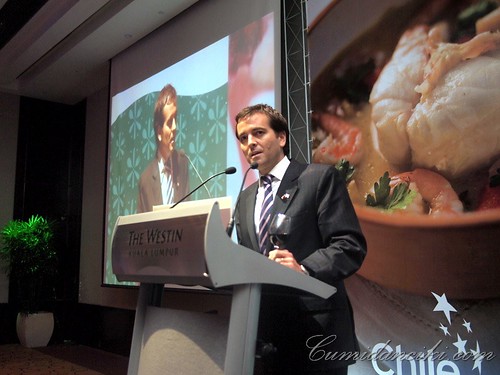