The Isle of Islay is the place where I tried my hand at peat cutting, for the first time, and what an experiece it was! Islay is famous for it’s eight whisky distilleries and a ninth distillery is planned to open in 2009 in the lovely village of Port Charlotte. The Inner Hebridean islands of Islay and Jura are the perfect destinations for a relaxing break. Islay, the most southerly of the Inner Hebrides, is famed for its smoky, single malt whiskies, wintering geese, miles of sandy beaches and friendly locals. Jura, which takes its name from Old Norse dyr-a (deer island), is a magnificent wild and lonely wilderness with its distinctive triple peaks, the Paps of Jura, attracting hillwalkers and nature lovers alike – the perfect island escape. Islay & Jura are home to nine world famous malt whisky distilleries – Ardbeg, Lagavulin, Laphroaig, Bowmore, Caol Ila, Bunnahabhain, Bruichladdich,  Kilchoman (the most recent addition which opened in 2004) – and last, but by no means least, Jura. 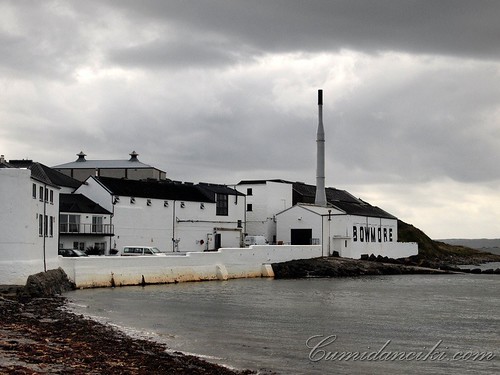 Both islands Islay and Jura, though distinctly different in character, have stunning scenery, abundant wildlife and are great for outdoor walking. Many nice, quaint hotels are scattered throughout the area and they house some cosy restaurants that all employ fresh, local produce in their cooking. Several annual festivals are organized between spring and autumn with themes varying from Walking, Jazz, Gaelic culture, Classical music, to books and art exhibitions.  We actually had the honor of meeting Scottish musician legend, Dougie MacLean at the Jura Music Festival on this trip as well. Apparently Jura has 6000 deer, 200 people and 1 music festival. We found this to be true and saw many deer on the way back from the Isle of Jura, but not a single person. Needless to say, our road trip was peppered with bad “deer jokes” as well;)

What did one deer say to the other? “I have no eye-deer.”

What did the male dear say to the female deer? “Deer.., hunter!” 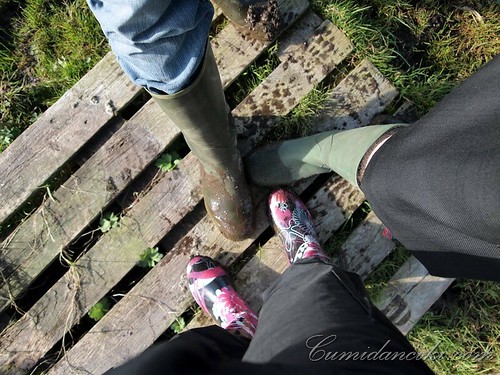 So back to the peat cutting. Here we are at Islay, all geared up for peat-cutting. I bought my very first pair of Wellies at the town nearby – don’t they look grand (spot the chick’s wellies!) ? Before we started off the intense peat cutting session, we first had tea, coffee, cakes, and homemade scones all prepared by  Rachel MacNeil of Wild and Magic Islay,  our lovely host. Then on to the serious business of Peat Cutting.

A Video on What Peat Cutting is all about, and what gives the Whiskies of Islay, that characteristic peat flavour..

Photos at the Peat Cutting Workshop 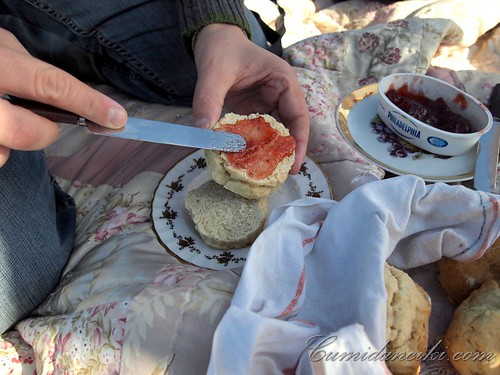 a picnic of scones and tea 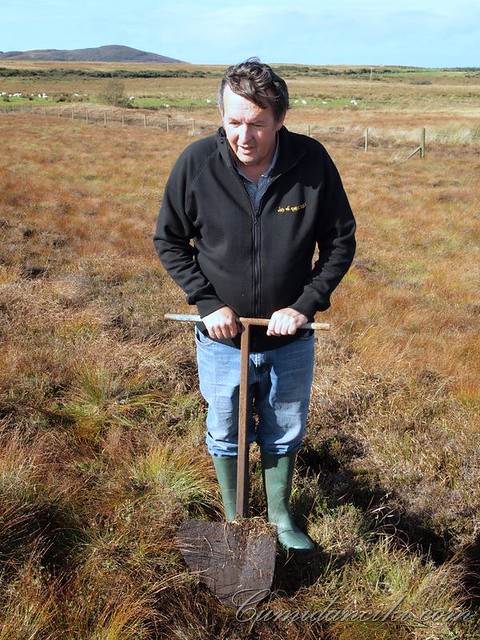 You will see from the photos that a sharp spade and peat iron are the essential tools of the job – plus plenty muscle power and effort. After draining the peatbanks of any lodged winter rainwater, the strenuous work of lining,  cutting and removing the turf begins from the entire length of the peatbank. Before the peat cutting could start there is the final preparatory stage of ‘cleaning’ the rough uneven soil/peat layer left over from removing the turf. This exposed the pure peat surface which measures about 20in (500mm) across. 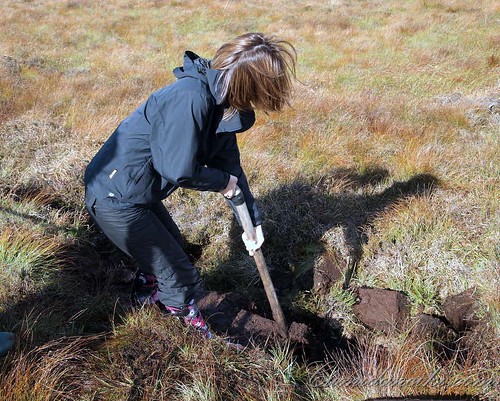 The peat cutting now begins.  Depending on location, the top peat layer could be quite tough, dry and difficult to cut requiring a strong, heavy boot.  The first peat also tends to have more humus and root material in it so careful control of the cutting iron’s blade is essential. Although a lighter peat for burning a few big peats of this type were preferred for laying flat on top of the fire at night to keep it burning safely and very slowly. 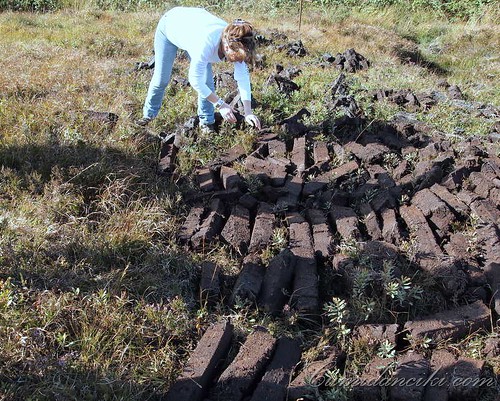 Having left the peats to dry over 2 or 3 weeks of good weather, they will have dried up sufficiently to be stood on without collapsing.  This next step is called ‘lifting’ the peats into what is called a ‘rùdhan’ – as follows: First, two peats are placed standing on an end and leaned in to support each in an upturned /\ shape with the wet side facing out. Then another two peats are placed standing leaning into each end of the tent shape. If the peats are very dry a 5th peat could be placed flat across the top. This allows the underside of the peat which was lying on the wet ground to dry.  The small ‘rùdhain’ were then left for a further two weeks of drying.

When fully dry, the peats would be traditionally loaded directly into a creel, a sack, a wheel-barrow or into a horse-drawn cart. Over the past 50 years most of the peats were transported home by tractor trailer. We were told by our hosts that one sack of peat costs about 50 pounds. Oh for Peat’s sake.. that’s a lot of hard work I tell you, and not much money, for one sack of peat! (pun intended)

After the picnic , we entered the tipi for our hard earned lunch of delicious homemade bread sandwiches filled with Islay beef or eggs, again courtesy of Rachel. We used peat to warm the tipi and the aroma from the peat is not one I will soon forget, to be sure. It is this same aroma that gives the Isle of Islay whisky’s their distinctive flavour and fragrance. I was told by Rachel that the distillery of Bowmore, grinds the peat to a coarse powder, which is spread on a normal fire and so produces the necessary smoke with less peat. In that way the smoke yield of the peat is increased. Peat is one reason why different distilleries have different characteristics in their whiskies.

Peat smoke produces contains chemicals called phenols and these phenols are absorbed by the malted barley during this process. The level of phenols are controlled by the length of time that the barley is exposed to the smoke, the amount of smoke produced and the type of peat used. Once finished, the malt is taken away for mashing and the phenol level is measured. This level is known as the ppm – parts per million. A distillery will always have the same ppm for their malt and this value is also measured in the final spirit. 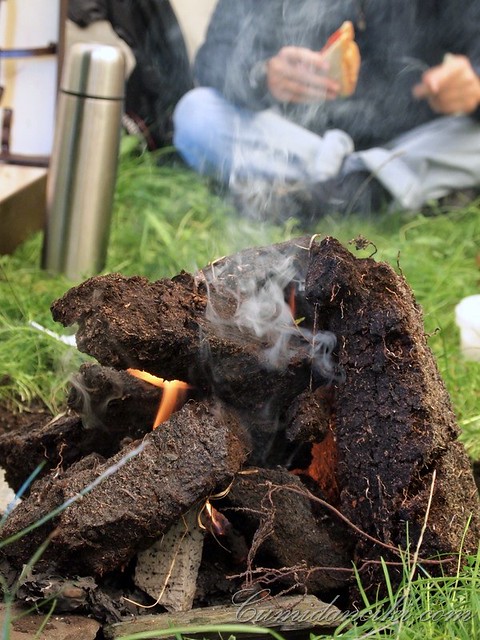 Some of it is lost during distillation so the ppm is always lower at the end, roughly one third of the level of the original ppm. The ppm figure most commonly used is that of the malt. All whisky has some smokiness but in most the ppm value is so low (eg. 1–5 ppm) that it is virtually undetectable. In smokier whiskies, it is easier to detect these levels as the ppm increases. Examples from less smoky to smokier whiskys are Bunnahabhain (1–2), Bruichladdich (3–4), Bowmore (20–25), Laphroaig (40–43), and Ardbeg (55).

What should one make of a restaurant named, Hit & Mrs ? There’s much interest these days in something gourmands and chefs alike call…