Bistro a Table is housed in a modestly sized space and its splashes of vintage French posters, sparse furnishings, low-hanging modern decorations and lazy French vocals played throughout the night, inspires a certain Gallic joie de vivre. Chef-proprietor Isadora Chai’s occasionally wacky but always cutting-edge cooking at Bistro a Table, is well regarded by food lovers, including me, and even in the short span of the two months it has been up and running , I have been happy to give it repeat custom. The great news is that the chef has started her Degustation Nights. Yes, Bistro a Table’s degustation nights have finally arrived. These are held every First Monday of the month and it’s during this time, that The Chef gets a little more inventive and experimental with the food, taking the dining experience to another level of fine dining. This first ever degustation night had a theme entitled, Everything Weird and Wonderful, and whilst some of the food was wonderful, not all of it was really that weird. Maybe I am getting harder to impress these days, but I was really expecting something far weirder;)

Anyway, I was going to say that this brave and adventurous degustation is still very much a modern menu, almost as eccentric as the Chef herself and showcases off-beat contemporary French cuisine. Expect such curiosities as duck tongues anointed with Quince Aioli; leafy wood sorrel as part of a traffic light stopping cold soup number; Cannelloni in Lobster Bisque & Indonesian Buah Keluak as an interesting fusion number, and sweet Salsify partnered with Stuffed Cured Quail as part of the grand finale.

Highlights in our meal of hits and misses were these perfectly executed dishes, most notably the Kataifi wrapped Chevre in Beetroot Puree. We also loved the meaty, chewy Duck Tongues in Quince Aioli & Flash-fried Squid but our main complain was there were so few tongue and far too many squid on the plate.  An incredibly fluffly, air filled soufflé had us oo-ing and ah-ing our appreciation. I cannot remember the last time I had a souffle as perfectly inflated as this. It truly defied gravity.

On the downside, Bistro a Table’s degustation menu for what is was, seemed over-priced. Lafite has a similar 8 course degus/tasting menu for almost the same price. An excessively salty Cured Quail, and a ginger beer that lacked fizz (dessert) both missed the mark. Also, for the price of that degustation menu, we would have expected the friendly waiters to introduce each course of the menu and to know it inside out. They should have effortlessly reeled off descriptive anecdotes or at least told us what we were being served. There’s no denying the top quality produce and beautiful presentation but these things can be improved, we thought.

Apart from these minor setbacks, I do love dining at Bistro a Table because their whole purpose is to celebrate dining as an art form while keep the setting as informal as possible. As a result, every element of the dining experience would have already been considered in great detail, and the chef and proprietor would have tried to create an experience for you that’s as close to their idea of perfect as possible. Not every single dish that lands on the table might be your cup of tea, but that’s OK. 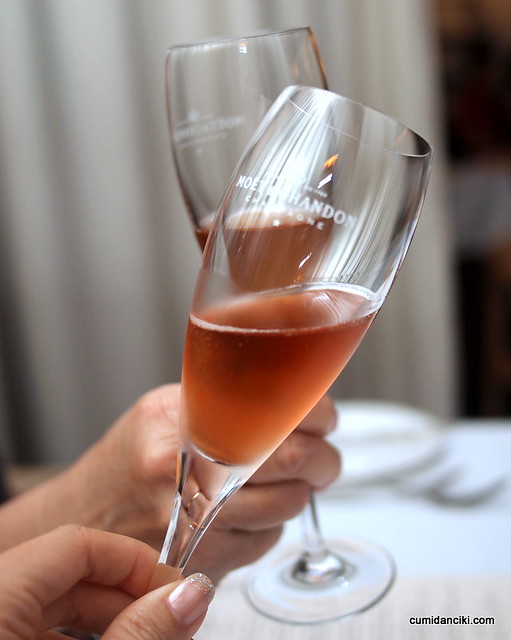 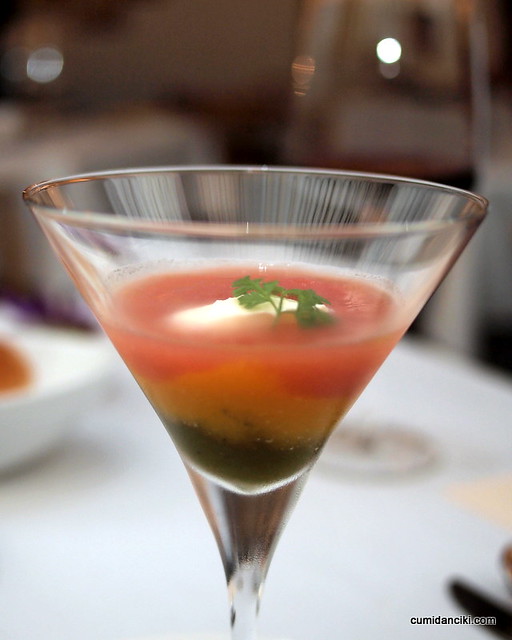 A light and refreshing soup that contained the three colors of the traffic lights.  This was delicious but barely whet the appetite, paving the way for a much stronger tasting starter. 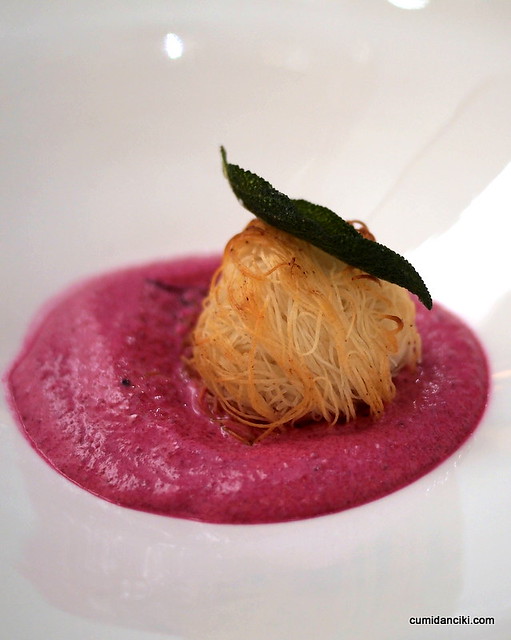 The Kataifi is a case in point. Gorgeous to look at, it is crisply deep fried till it’s crusted outside, creamy within (due to the goats cheese), and anchored to the plate with a rich beetroot puree. You may hate frivolous looking food, but this dish is an innovation that works. Pierce the crispy exterior with your knife, and a soft, somewhat pungent cheesy center unravels. Using the brittle Kataifi to mop up the remaining beetroot slurry, I might be in the garden of Eden. 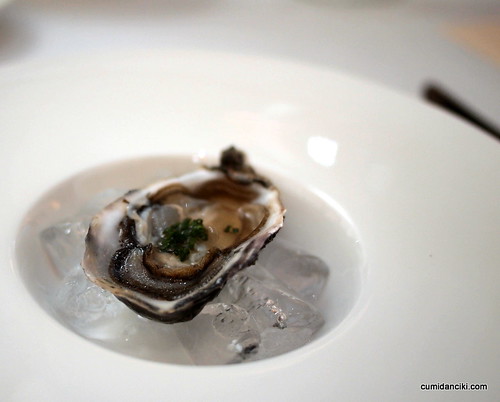 Irish oyster with yuzu dressing – not on the menu (complimentary) 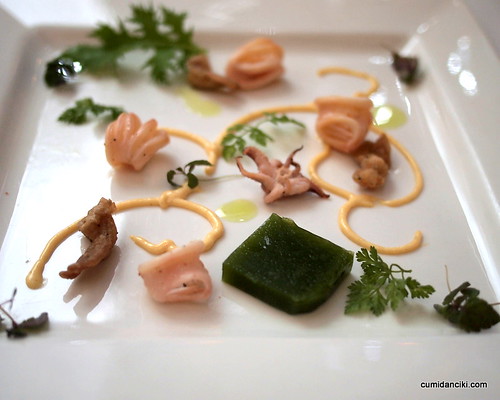 This was one of the highlights for me. How any ducks had to.. you know.. so I could have my fair share of tongue. I hear the process of removing the cartilage from the tongue is a tedious one. All that work for an itsy bitsy tongue. I asked Isadora if she would do me a whole bucket of these. She heaved a big groan and rolled her eyes all the way into the back of her head. (The woman is such a drama queen). 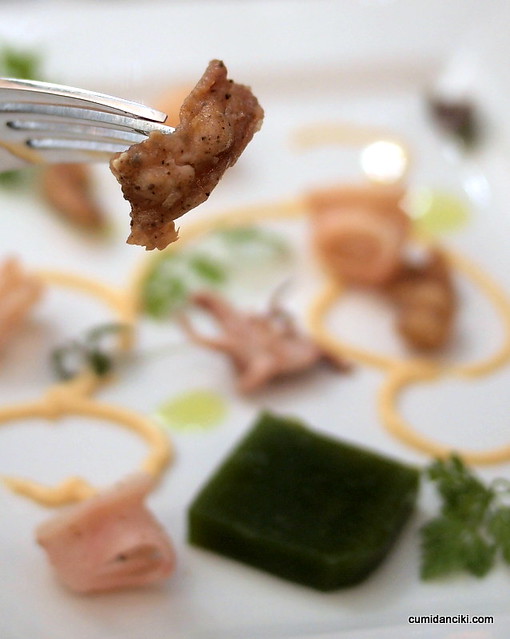 What’s the matter.. Duck got your tongue..? 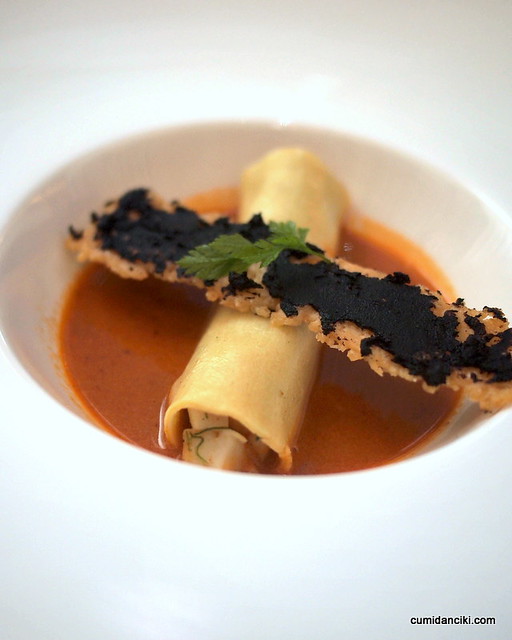 This was a well executed fusion dish. The Buah Keluak served on a cheese wafer was a nice touch. The cheese wafer however could have been crispier. I particularly loved the way the fragrant limau purut in the cannelloni added a flavourful kick to the crunchy prawns and scallop. 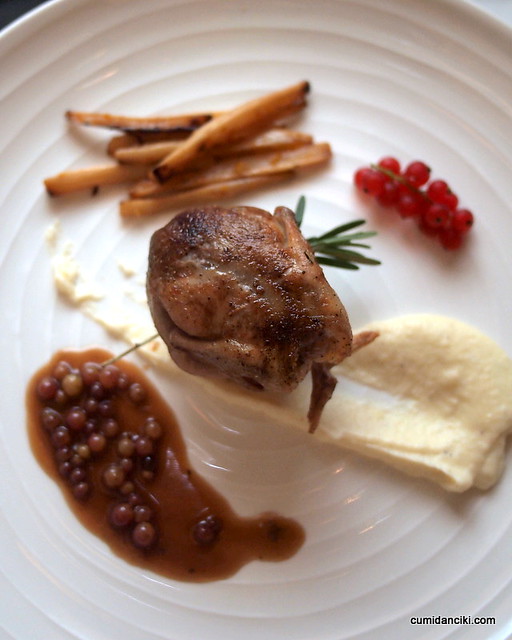 Great for meat lovers, but as we said, the Quail was too salty. Take it down a couple of notches and the flavours would have been perfect. The Parsnip puree, Cassis Jus and Caramelized Salsify were terrific touches to the dish that complemented the salt cured meat well. 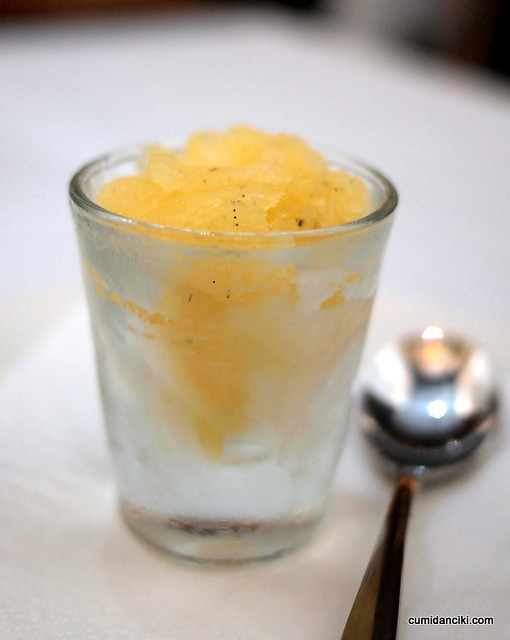 This light and fizzy palate cleanser was infused to perfection with blended fresh Pineapple and fragrant vanilla beans. 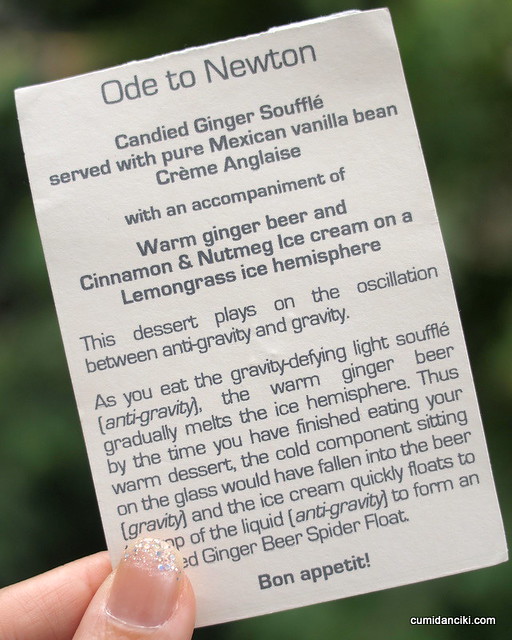 Ode To Newton – both me and my dining companion wondered if dessert would be falling apples.. 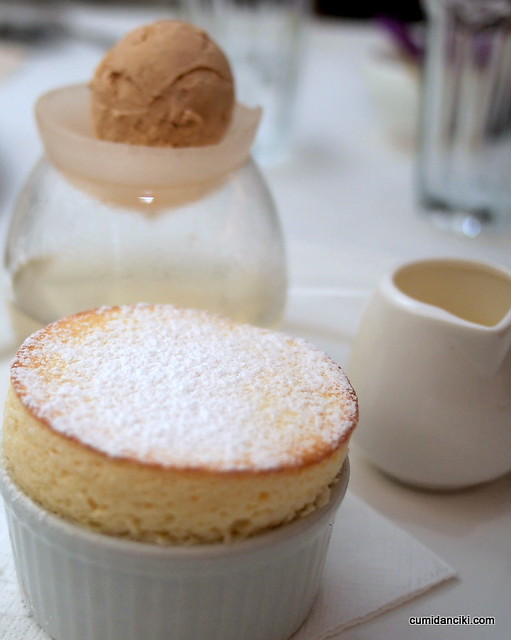 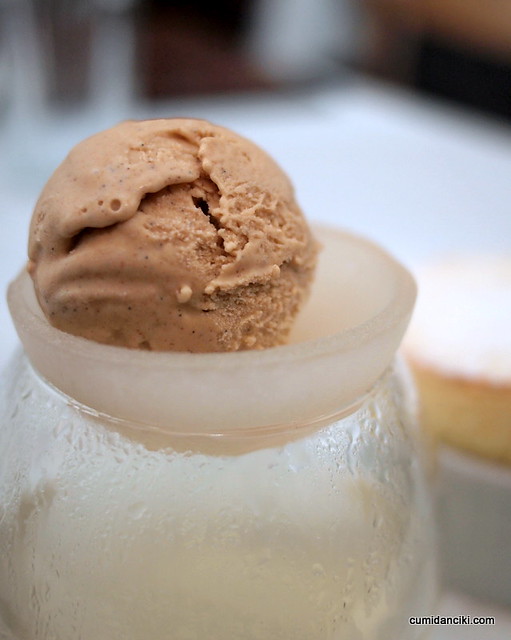 As the ice melts away, “gravity” does the work of pulling the ice cream down, into the ginger beer, giving you, a ginger beer float

No, as it turns out – no falling apples. This quirky dessert can only be described as, the anti-gravity and the gravity. The souffle that is light and airy represents the “anti-gravity”. By the time you have finished eating it, the ice-cream that sits on top of a hot glass of ginger-beer is supposed to have dropped into the ginger beer, this motion representing “gravity”. The ice-cream as it turned out, needed some help falling into the ginger beer as the ice was too thick. We helped it along;)

Well, all in all, an interesting degustation experience. The next one will be held the first Monday of the September and will probably have a new and exciting theme, I expect. If you would like to book or be informed on the ever-changing degustation menu for the month, please leave Bistro a Table your email address at [email protected] Degustation events are strictly by reservation only. Degustations are priced at RM380 without wines, and RM500 with wine pairing.

Mondays: Closed (unless it’s for Degustation on the 1st Monday of the month)

Many coffee shops in PJ and KL claim to do great affordable western, but very few actually make the cut. Well in our books…