Once upon a time, about a year back to be exact, one of my favourite Japanese restaurants closed down without so much as a whisper. No warning nor murmur of an apology. 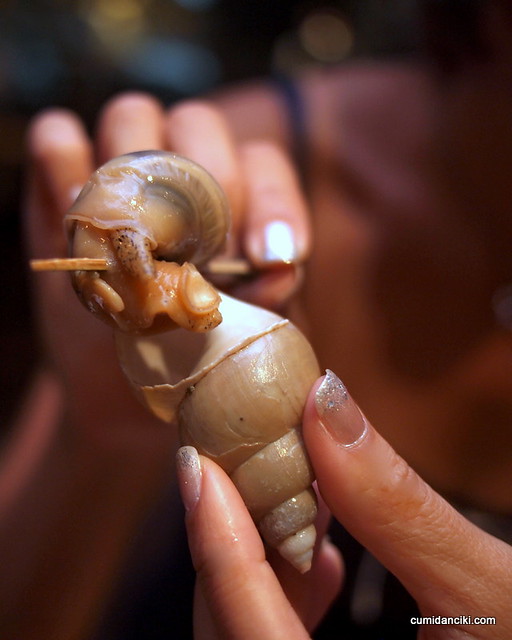 Tucked away in Menara Keck Seng on Jalan Bukit Bintang, I used to love coming to this place for many reasons. One, it was not so mainstream as your big flashy Japanese restaurants in the neighbouring mega-malls. Two, many discerning Japanese loved to come here. Three, they did fantastic, weird, in-season orders that were not on the menu.  Tykoh Inagiku was one of the oldest Japanese restaurants in KL, owned by a Japanese fish wholesaler from Tsujiki Market, Tokyo. When Boo of Masak-masak broke the news to me that they had closed down, I cried, I wailed. I lamented to her and we both held each other and shook our heads. What a shame.. what a shame.

Anyway, the good news is that, we can both stop crying now because the people from Inagiku have opened up again. Hanare is the name, and they will be here to stay for sometime I hope. Hanare is not exactly traditional looking. In fact, it does have more surface polish than its forebear, its clean lines and warm woods forging a minimalist appeal. It also has ostensibly Japanese-inspired dishes that go well beyond the sushi and sashimi.. and some of its cooked food is as impressive as its uncooked ones. Located at The Intermark on Jalan Tun Razak, this place is situated in heart of Kuala Lumpur’s city centre. I know it’s a little bit early to say, but I am putting my money where my mouth is and saying it. If  there was any one Japanese restaurant to visit this year, this would be it. 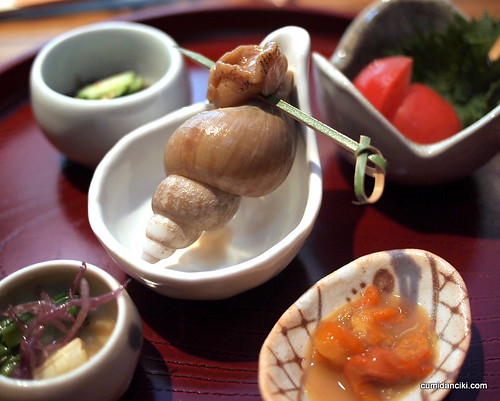 First things first. If you come in here, please be prepared to fork out some good money for the Omakase. If you wish to order from the regular menu, by all means, grab a table .. but you will be missing out. If you go with the Omakase of approximately RM250 -300 per head, you must submit to the Japanese version of Nazi Dining at its best.  In other words, you obey the chef, eat what’s served, and God help you if you drop a grain of rice or dip something in wasabi without permission. The payoff is that whatever you eat is freshly shipped in and often exotic. Whether it’s amberjack or sea urchin from Japan, or something a little stranger that resembles brains, the Chef’s Omakase comes with a strict protocol – dip only when permitted, and then with restraint. This is an amazing experience for sushi aficionados.. a true journey into new tastes, textures, and sensations. It’s expensive but well worth it. In certain countries you are not even allowed to question the restaurant on the price of your dinner. You are completely at the Chef’s mercy. 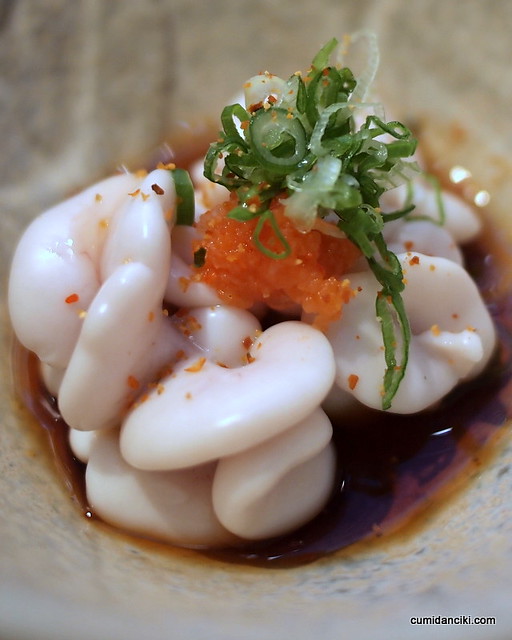 Whatever the precise trick, it’s a reflection of the serious efforts behind a meal at Hanare, which manages to make it stand out against other restaurants. It does this in part with brilliantly cooked simmered dishes, like the Nimono (ice fish) , then augmenting that with a superb selection of sushi and sashimi. 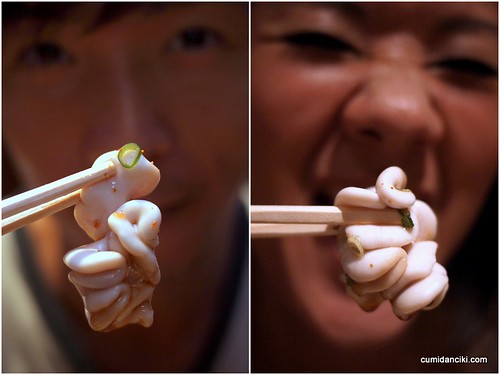 I’d be lying if I said Cumi wasn’t initially freaked out when a small bowl of glistening shirako was placed in front of him, but he resolved not to be so squeamish when we saw a brawny guy near us, dig in without hesitation. Topped with thinly sliced scallions and a drizzle of ponzu sauce, the shirako sashimi was slightly sweet and vaguely briny with a smooth custard-like texture that resembled brains.

About the taste.. it’s gooey and, well, tastes a lot like slimy, neural matter, but way thicker in consistency. Like the stuff you suck out in a long thread, from the center of the spinal chord of a chicken. Oh, and with an eggy aftertaste. It says somewhere that, the advantages of eating cod-milt or cod fish sperm are, it gives you stamina and increases performance in bed, but then again, they say that about most things gooey or gunky anyway. So, only one way to find out!  (I won’t tell you my personal findings:P) 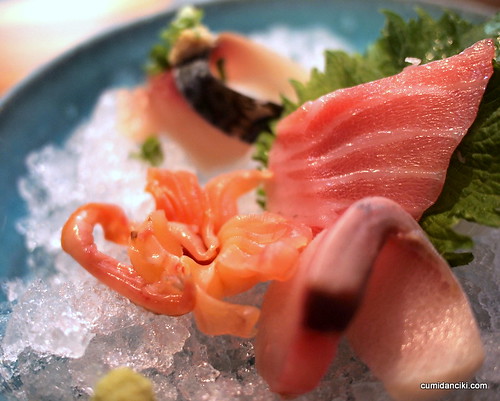 I heart sashimi for its straightforwardness and ease.. one big bite, a few clear and clean flavors, nothing too florid, nothing too brash. I love it for its texture, at once firm and pliant, giving you something to chew on.. like the birth of a new idea, the hatching of a new plan. What an irreplaceable feeling.

The Sushi Chef is honestly doing an exemplary work with the sashimi. Be sure not to miss the sweet Toro and Akami, perfectly textured; the Akagai, slick and substantial; and the Hamachi and Isaki, freshest you will get in KL. Flavour all this with some shiso leaf, whose perfume remains even after it’s peeled away.. and be thankful to be alive! 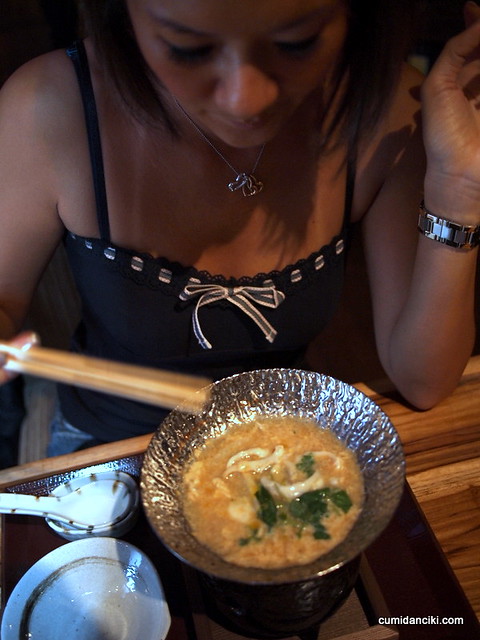 Ciki checks out the little glistening eyes, staring up at her.. 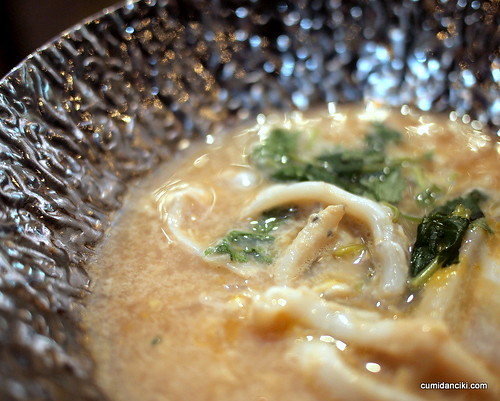 This is the Ice fish, simmered in a seasoned broth. This eggy broth was flavored with various seasonings including dashi, miso and fresh ginger. Smooth and sweet due to the egg, the fish actually is so soft and brittle it comes apart even as you pick it up between your chopsticks. Not my favourite way of preparation of the ice fish but it was tasty enough. 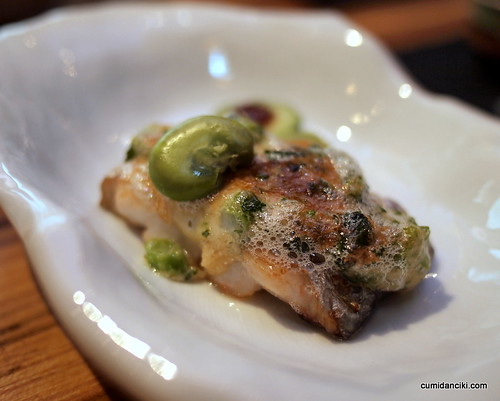 This fish known as the Hairy tail fish, wasn’t as uniformly impressive, but it was hardly run-of-the-mill. I could feel the promise of flavour and depth, marred by a slightly overcooked texture.

Having said that, the breadth of this restaurant’s fish selection is thrilling — adventurous eaters will be happier here than any where else. Its sushi chefs know their stuff. The tuna, pike mackerel, jackfish, bonito and sweet white shrimp and Oh! for the love of  Omakase! Most dishes are seasoned to perfection, with scallions, yuzu and wasabi all weighing in at the right moments in the right measures. 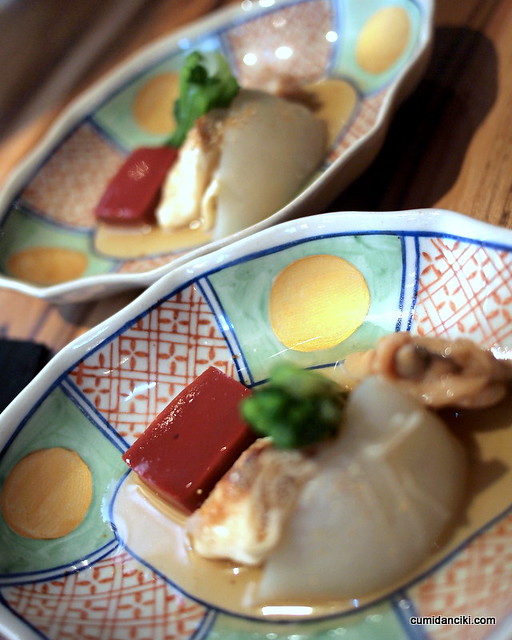 The Yasai Taki Awase.. as beautiful in presentation as in taste. A wonderful ensemble. 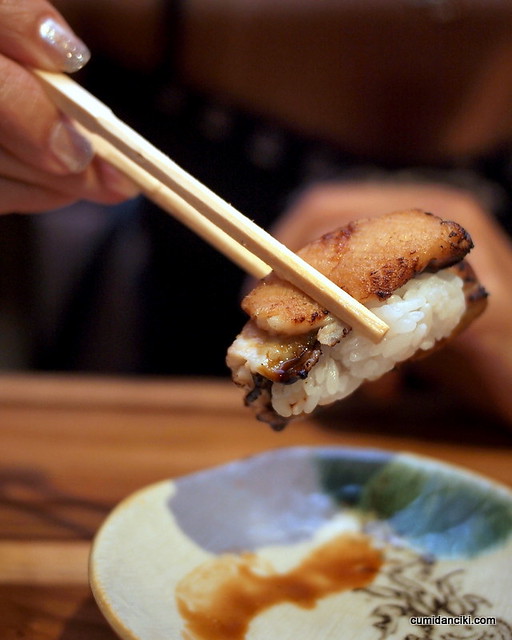 The sushi here is fantastic. Everything about it is the bee’s knees. Just go crazy with the sushi, you will not be disappointed. 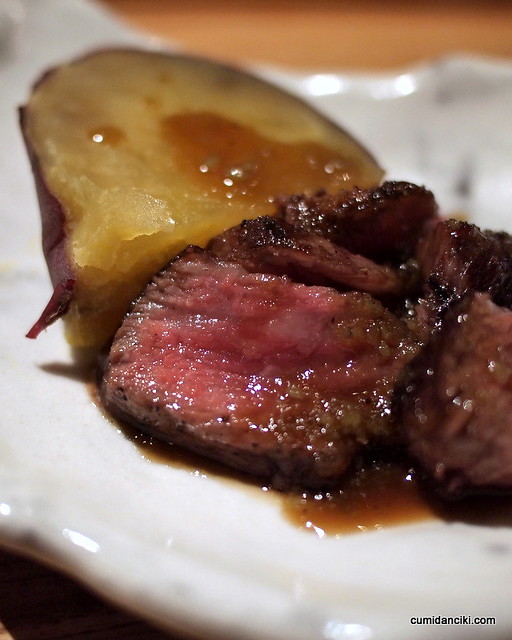 Shiatsu, deep-tissue or heat massage.. Which manner of pummeling becomes a cow most? I asked the head waiter and he looked at me like I was a lunatic.You see, if the cow is “massaged 500 times”, and tastes this good, I’d like to know which form of massage, so that I can go get it done for myself. Seriously, I was just posing the obvious follow-up question.

I never got the answer, but I can tell you that this Wagyu is outrageously good. The way it is prepared accentuates the creature’s distinctive meatiness. It’s supple, creamy textures are to die for. That, and a bite out of the steamed sweet potato is a marriage made in heaven. 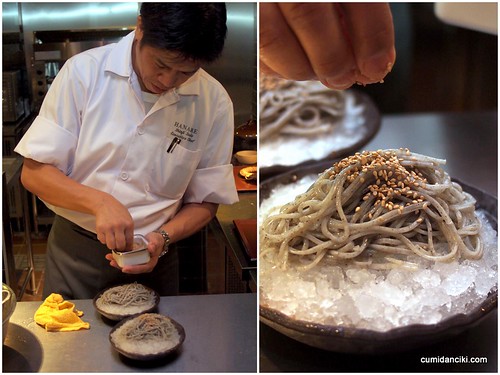 Sit at the counter if you want to observe the Chef in action, and the ensuing spectacle, complete with flourishes of hand when he sprinkles the goma, is magical.. part nourishment, part entertainment, and part ancient performance art! Wonderful. I want to rise up and applaud! 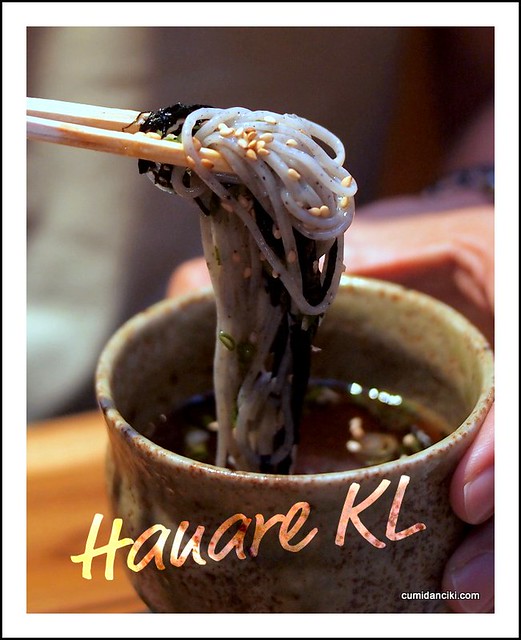 Hanare is the only place in KL that does the Goma Somen and you would be crazy to miss it. The texture of this sesame fine noodle is out of this world. Bouncy and springy, it really is a world-class somen. 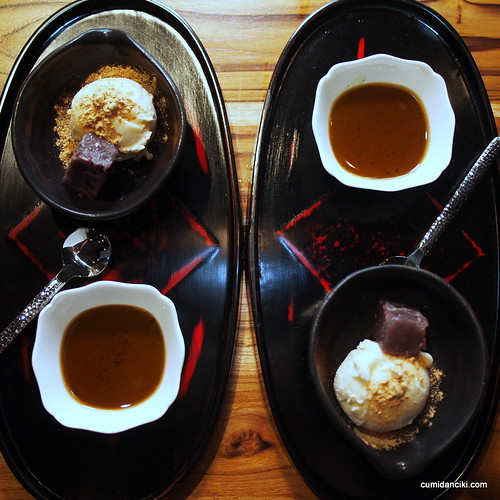 The grand finale of desserts 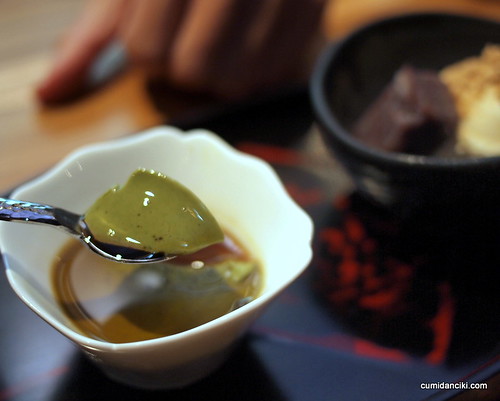 End it all on a high note with a smooth, Macha pudding and call it a night. Well, dining at Hanare,  is not just a meal, it’s an event in itself. Be sure to save up for the Omakase. You will not be disappointed.

Has one year really flown by so fast? I remember as if it were just yesterday that I met Debbie Teoh, Nyonya Chef extraordinaire…