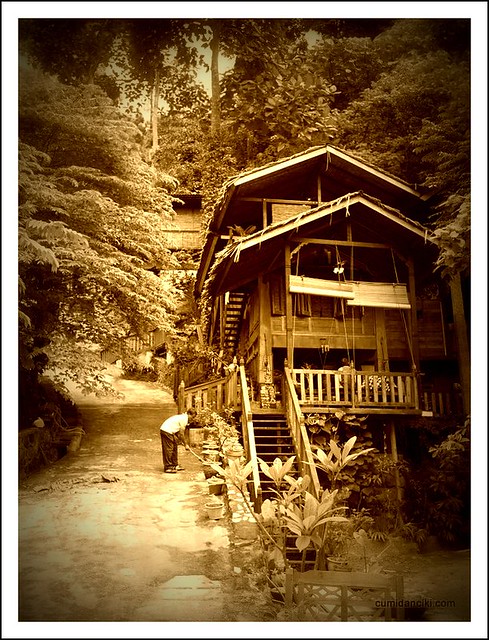 Gazing up from the bottom of the steep hill, one cannot help but feel as though one has entered an exclusive haven reminiscent of a traditional kampung or village. Green plants and blossoming flowers, basking in the lushness of nature.. this place is a sanctuary from the bustle of daily life.

As we walk up towards the rustic chalets, we sense the unspoken invitation to enjoy the simple and laid-back atmosphere of a kampung way of life. Here you’ll feel relaxed and completely at ease.  The wood carvings, the attap roofs and the signage that says Nada Lama Jamu and spa, indicate to us, that we have arrived at the right destination. 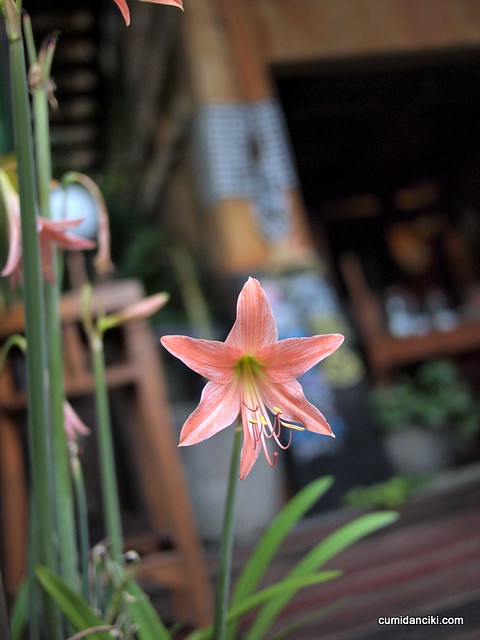 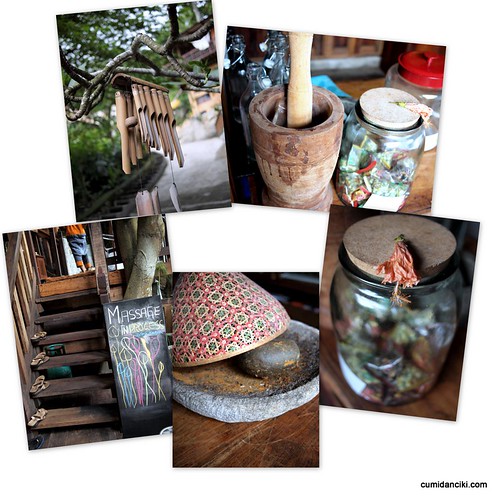 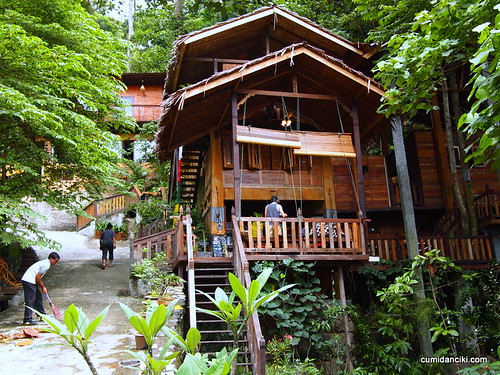 Nada Lama serves simple kampung food in both Indonesian as well as Thai styles of cooking, but it is the spa that really peaked our curiosity. We had heard that the Traditional Indonesian Massage, Pijak (by stepping and using the feet to massage) would cost RM90 for 60 minutes and the Ayurveda Yoga Thai Massage was priced at a mere RM60 for a 120 minute session. Wow, pretty worthwhile we thought. 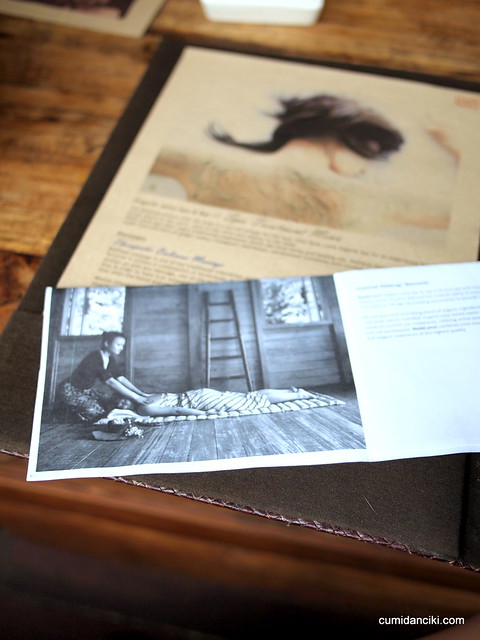 Unfortunately there was a wait that day for the massage, and as we were in a hurry, we decided to try the food but go back on a later date for the very enticing spa massages. 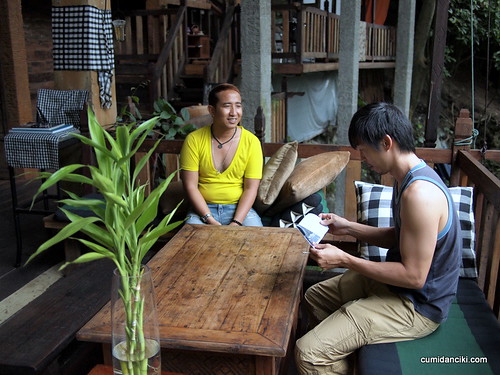 Here’s Cumi talking to the manager of the place. 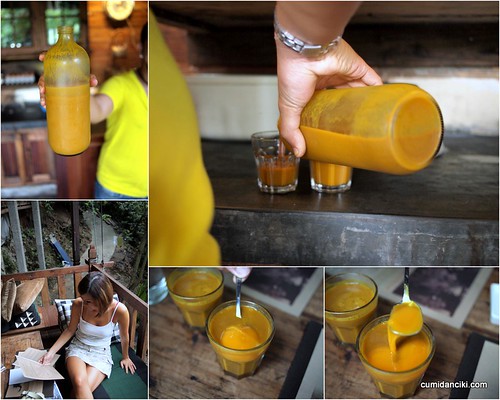 What is this foul smelling, thick, pungent, yellow liquid you ask? Well, let us introduce you to the Jamu.
The practice of making and drinking Jamu, dates back to the time of the Buddhist empire that built Borobodur, and its association with the royal family. These people drank it as a tonic. Till today, Indonesians still cling to their belief in jamu’s transformative powers. Jamu makers often are elderly women  – Ibu being an honorary title meaning mother, and jamu recipes vary from seller to seller. Most are highly guarded family secrets passed down over generations. The manager tell us with a sly smile on his face that this tonic covers nearly every infliction imaginable, from easing labor to increasing strength to treating coughs and fevers and protecting children from disease. He grins at Cumi and tells him, “there is one to make Boys strong too”! Cumi says, OK, let’s try it! 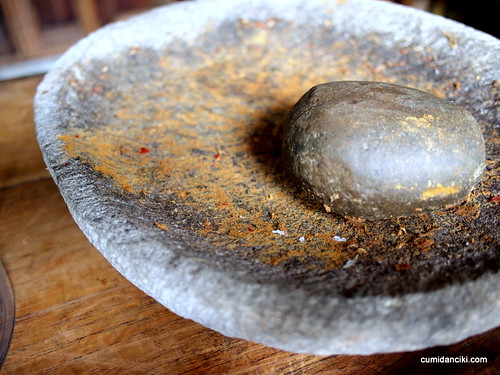 A few of the most common herbs in Jamu and their uses:

Turmeric = for detoxifying, to curb snoring, to ease menstrual cramping and reduce body odor.
Galangal = for seasickness and sore throat. Singers often drink concoctions with this root to keep their vocal cords performing at top notch.
Ginger = for detoxifying, morning sickness and to warm the body, improve circulation.
Lemongrass = for alertness, to stop gum bleeding and repel mosquitoes.
Tamarind = for constipation and to improve skin softness.
Sulfur = for rashes and itchy skin. Also used frequently in beauty products.

And, an egg! Sometimes they add a raw egg in for good measure. This is the one that Cumi had. Totally grossed me out!

How they make the Jamu is by pounding up the ingredients with a pestle and mortar, till what you have before you are bowls of herbal pulp, pots of elixirs and various smaller cups for mixing. Then after mixing the pulp in a brownish liquid  you should squeeze out the juice over a strainer. The result is a bitter-tasting tonic.. Voila! you have Jamu- the traditional herbal medicine venerated by Indonesians of all ages for its power to heal ailments or enhance one’s beauty, strength or stamina! Apparently people say,  “It can grow a mustache on you,”  and I totally believe it. It’s hard not to wince every-time I take a sip. I just knocked mine back in one swift gulp and chased it with cold water. 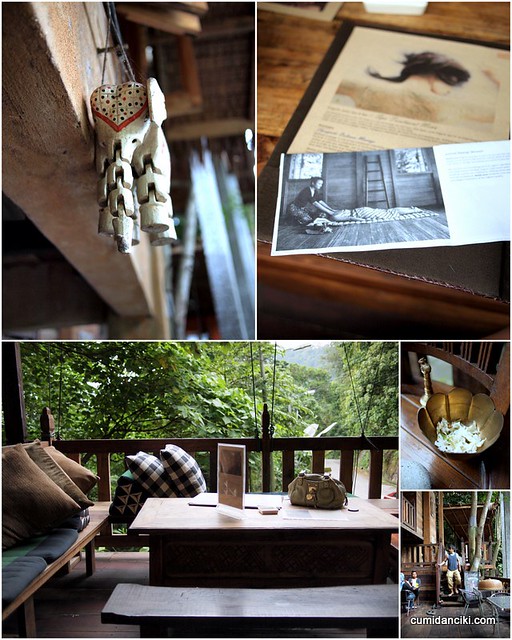 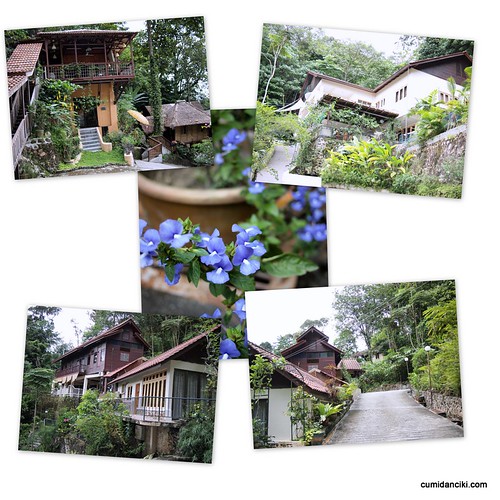 Even further up the steep slope from Nada Lama, are the newer, more modern Malay houses. This area is truly gorgeous. With so much green foliage and lush flowers, it is hard not to fall in love with this place.. 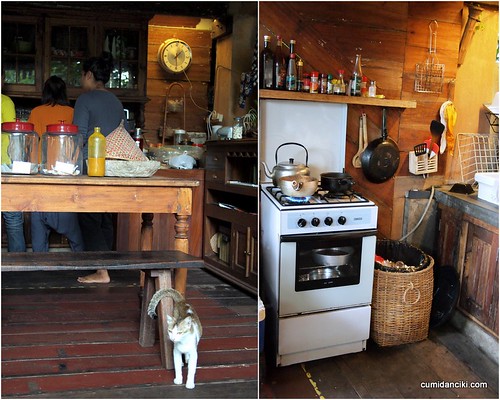 After our quick excursion, we go back to Nada Lama for lunch 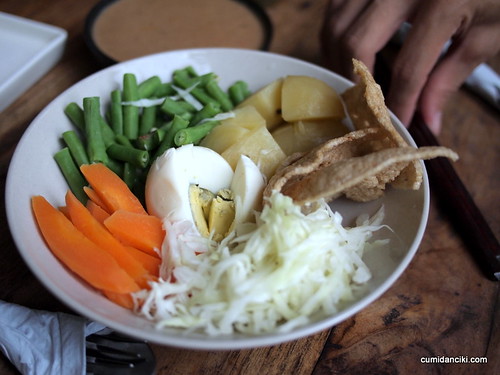 Gado-gado or also called Lotek (Sundanese and Javanese language) is an Indonesian dish comprising a vegetable salad served with a peanut sauce dressing. The one served at Nada Lama was light and refreshing, bordering on bland, but in a good way. The sauce was not too sweet nor salty and all you can taste is the rawness of the vegetables. I liked the Gado-gado this way. Cumi found it tasteless. 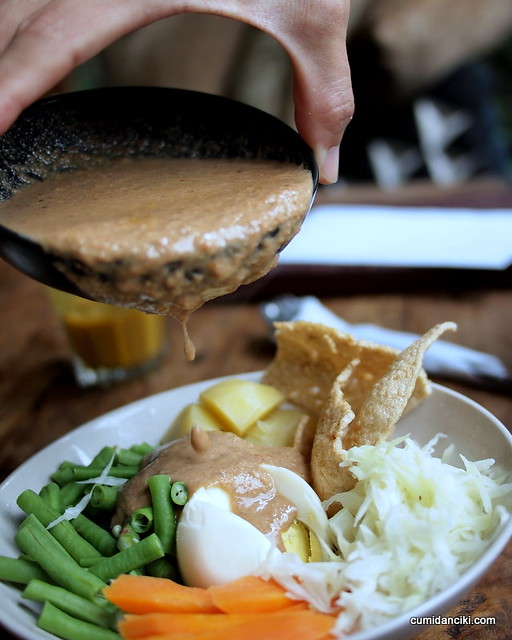 Homemade peanut sauce. Low in sodium and sugar – we found this a refreshing change from the norm. 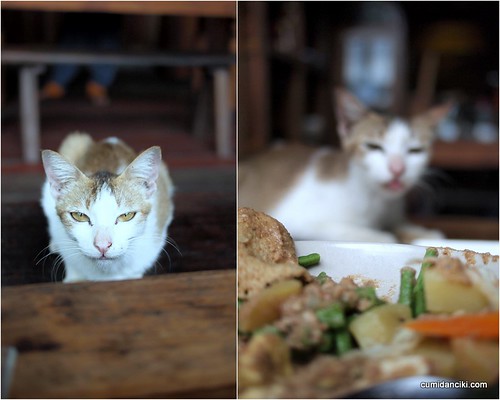 And somewhere in the background, a cat watches.. 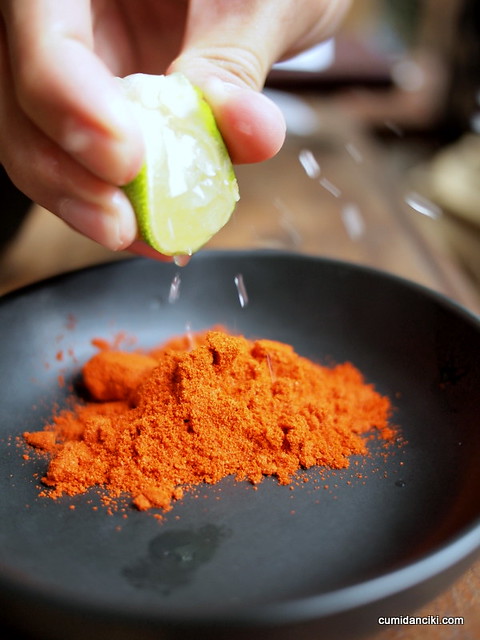 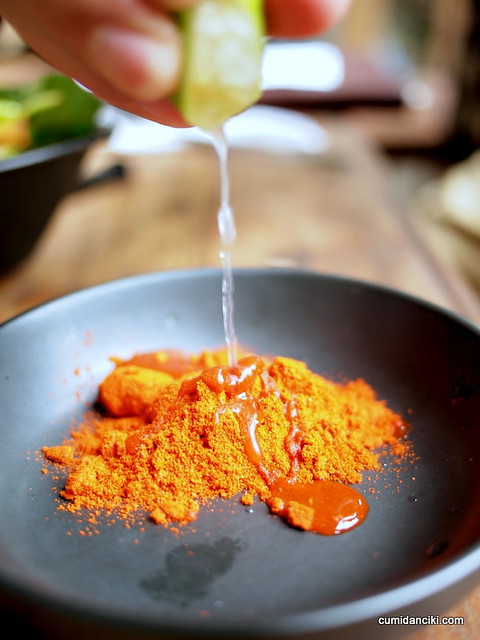 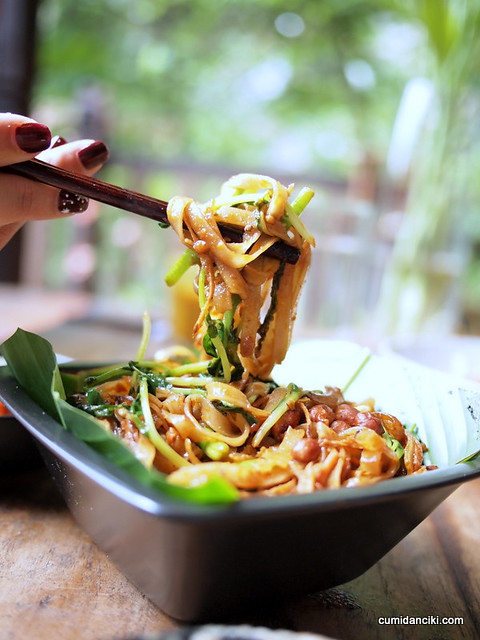 Thai Fried Noodles, at only RM8

Lots of nuts, cilantro, bean sprouts, vegetables and tomatoes. This dish lacked wok-hei but again was a non-greasy, healthier version of the pad thai. They were really generous with the nuts. This felt more like eating a bowl of health-spa noodles than a wok fried pad thai. Light on taste and flavour. We ate ours with the lime-chili powder as it was a bit tasteless to us. 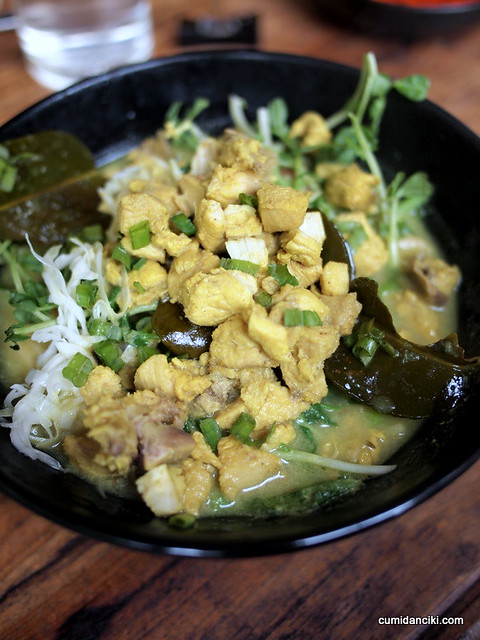 This was served as a bowl of yellow noodles, coconut, tumeric soup, diced chicken breast meat. Again, the bowl of Soto was light tasting but full of vegetables and succulent chicken. I think us city folk will find it too bland, but for RM6 I really could not complain.

All in all,  this is not a place I will go out of my way to eat at, but I will definitely be back for the spa.. oh, and more Jamu;)