Friday night’s gonna be all right! TGIF guys:) Here is this week’s Blogger in the Spotlight (BITS), Abigail King. 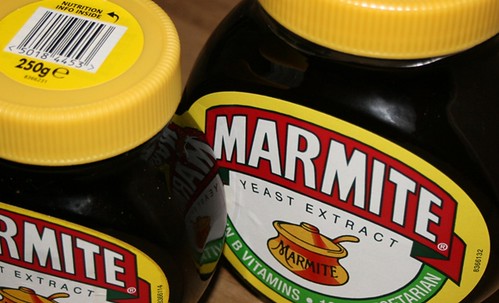 England gets given a hard time for its food, particularly by its European cousins. The stainless steel vats of saggy cabbage and unidentifiable veg in schools and hospitals up and down the country don’t help much either. Yet I’m not going to defend roast beef and shepherd’s pie or even Yorkshire puddings and fish ‘n’ chips. I’m going to talk about marmite. According to the label, marmite contains brewers’ yeast extract, the leftover sludge from brewing beer. After a few rounds of filtration, a handful of spice and a top-secret ingredient, marmite is ready to face the world.

Marmite comes in an unmistakable jar, with edges rounded like a teapot, and a sunshine-yellow lid. Inside, the stuff looks like glossy, black treacle with a thick consistency that some people compare to crude oil. Others think that’s unfair on the oil. Spread just right, marmite gives a sharp kick, with a hint of malty sweetness. It’s not to everyone’s taste, as the ad campaign realised when it ran with “Love it or hate it,” but let me state for the blogging record that I LOVE marmite. In fact, I harbour suspicions that many of those who claim to hate it simply don’t know what they’re doing. 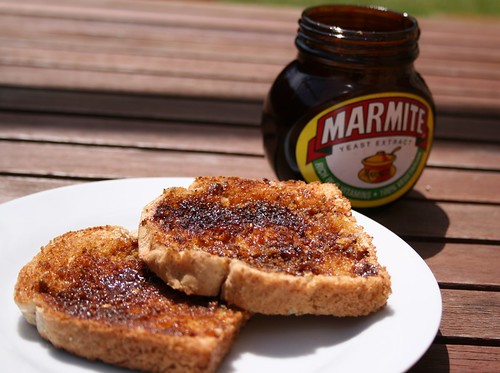 There’s a knack to spreading marmite, a technique that transforms the experience from “Holy *^%, I’ve just sustained chemical burns to the roof of my mouth,” to “Mmmm, I never knew that macerated fungus could taste so good. Give me more!” You need toasted bread, buttered while still hot so that the top layer of the bread dissolves (don’t let margarine lead you astray, it won’t work.) Then, holding the knife at a slight angle, smear the thinnest possible layer of marmite across the melting butter. The thinnest possible layer! This isn’t vegemite, this is strong stuff. Complete the culinary delight with a nice mug of hot tea. Traditional English food at its best.

About this weeks Guest writer:

Abigail King is a freelance writer from Britain who’s currently based in Spain. She has a passion for art, science and travel and a background in neuroscience and medicine. She blogs about global travel at Inside the Travel Lab and writes about short trips in Europe for Cheap Weekend Breaks.

I finally met them! The Fabulous Baker Brothers.. and fabulous they were. The most fun part was that we got to take them on…