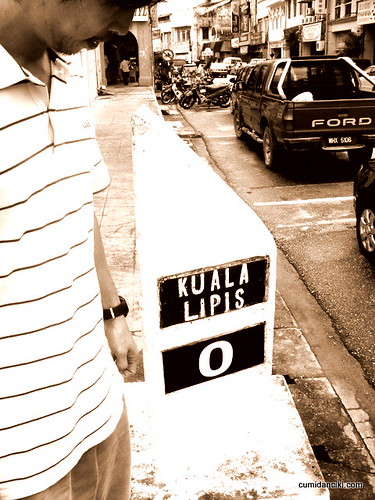 Imagine, in the 1880s, a town in the middle of nowhere; accessible only by river, which took at least a couple of days to a week of paddling to get to. Why carve a town in the heart of the jungle? Why not just make do with the seaside towns for convenience and accessibility? But unbeknown to many, Kuala Lipis may have a history far older than that written in our history books. 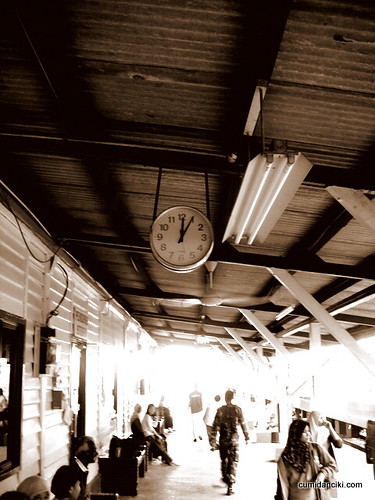 The town began its life as a trading centre for jungle products such as animal parts for medicinal values, feathers from exotic birds for decoration, roots and herbs, and gaharu (a fragrant aloe wood used for joss sticks) collected by the tribes in the interior and traded with Chinese middlemen for rice, salt and other basic necessities. 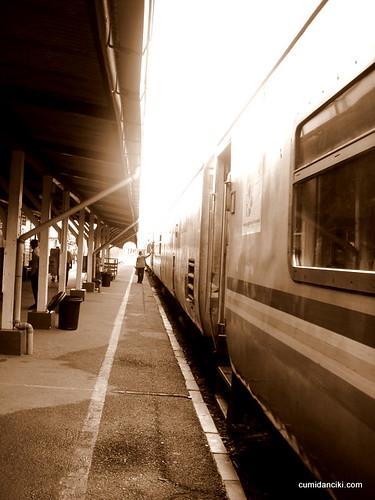 The town grew as their reputation as a trading centre brought Chinese and locals from afar to the area.  As tin mining fever finally spread across to the interior, the colonial government built the railway to transport precious ore out of the jungle. 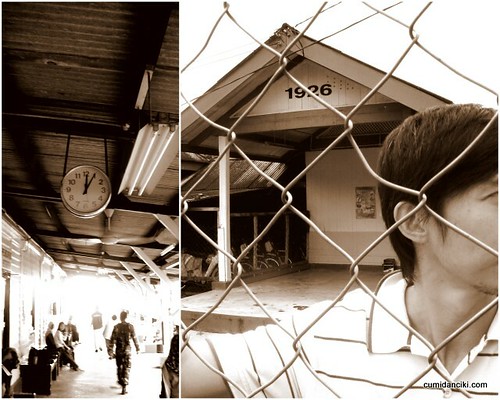 In 1920, the railway line extended from Gemas in Johor in the south to Kuala Lipis, linking these isolated trading centres to the ports. Traveling on the 12 hour long train ride from Kuala Lumpur to Wakaf Baru station in Kota Baharu, one can only imagine the enormous task that engineers and coolie laborers undertook in clearing areas of thick jungle and building bridges over jungle rivers that were well prone to monsoon flooding. The bridges and railway lines are in use till this day. (Check out Cumi’s Ah Beng stylo mylo hairdo :P) 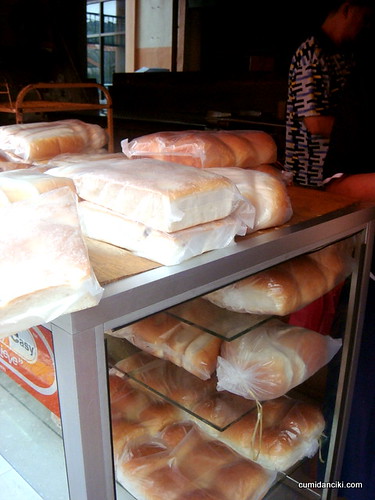 Since we had some time to kill before lunch, we had time to explore Kuala Lipis old town. Above and below, pictures from a Hainanese Bakery. Above picture, what you can’t see are those popular square buns from yesteryear – the ones sprinkled with granulated sugar and raisins places in a matrix. 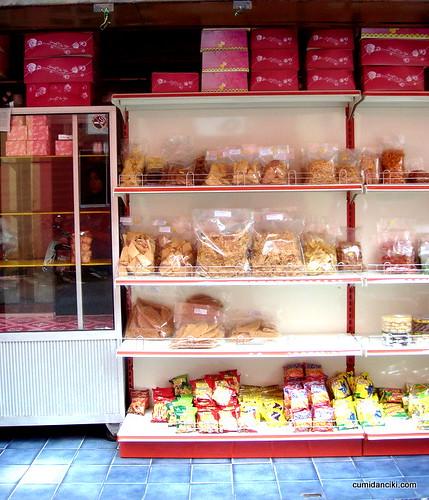 There was a distinctively Chinese area and a Malay area in the town. The Chinese businessmen built their atypical Chinese Shop houses, mainly along the 400m long main street aptly called Jalan Besar (Main Street). 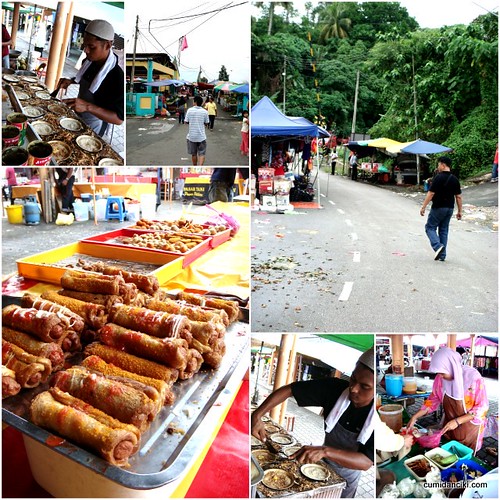 There was also the Pasar Tani (Farmers Market) that we managed to explore in the short time we had. The market was massive. It spanned several streets and even snaked down to smaller side roads. We wished we had more time to spend here. It’s held on a Saturday if you’re wanting to visit. A mosque from the 1800s still stands next to the river. We forgot to take a picture. 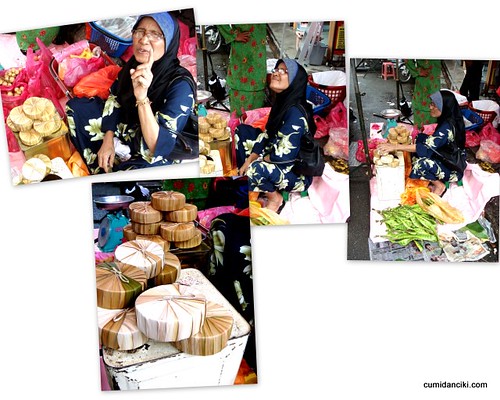 Here is the nice lady who sold Cumi the Gula Kabung. Sugar made from a type of jungle palm tree and this type of sugar is made mostly in this part of the country. Traditional desserts such as bubur kacang, kuih koci, kuih kelepong, dodol, waji and agar-agar, made with gula kabung supposedly tastes better than using gula melaka, another type of popular palm sugar made in Malacca state. 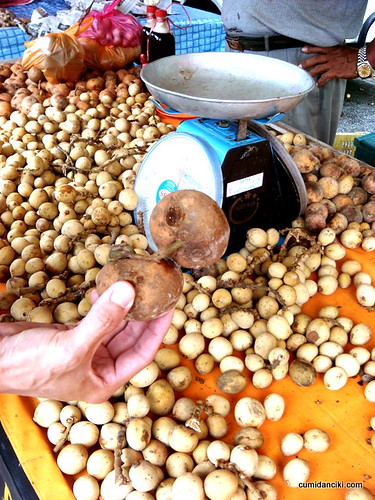 Then we chanced upon this duku-langsat looking fruit that was neither duku nor langsat. The man at the stall told us that it was Taban(Ganua curtisii), a wild fruit. It tastes less sour than langsat, tangy and is less aromatic/fragrant. It contains a slimy seed (similar to  mangosteen).  Cumi found it bland but I liked it! 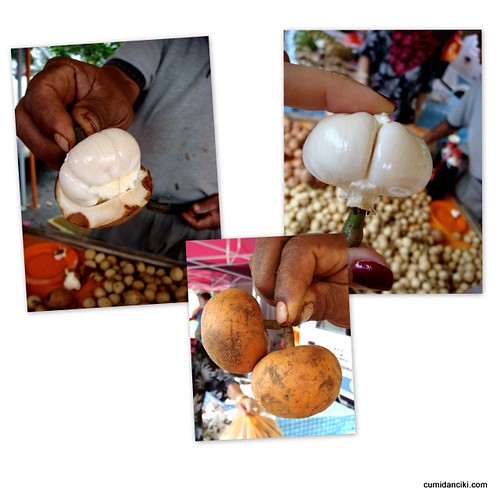 The soft, moist interior is delicious! I really like this fruit. 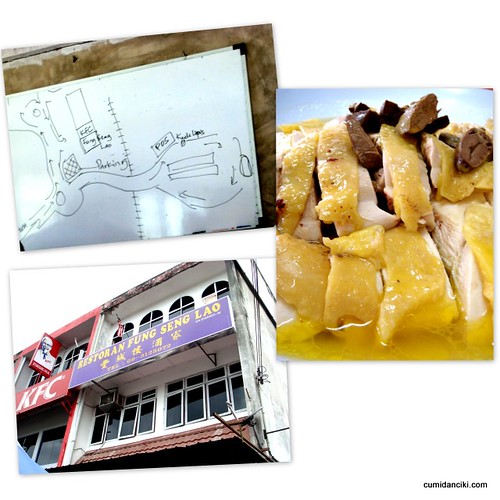 Time for lunch at Fung Seng Lao Restaurant! Our troop  of 17, after the long drive from KL and the morning ‘exercise’ at Sunshine Chicken Farm plus the walkabout around Kuala Lipis town, had growling stomaches eagerly waiting  to be fed! Our first dish was the Yim Kai. This yim kai/Capon was of the Malai Kai (Kampung Chicken) sort. The last time we had the Fahloh Kai (Color Bird) at Chef Tam Restaurant. (Review of the Color Bird Yim Kai).  The Fahloh Kai had a softer texture compared to this Malai Kai. Although delicious,  it had a tougher bite. If you are wondering, the skin does have a natural bright yellow color when cooked and not artificial coloring.  Sunshine Farm was so kind to provide the chicken complimentary, so we were only charged RM8.00 for the cooking. 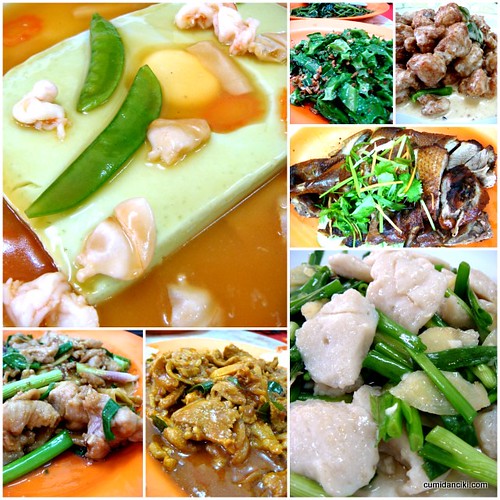 The other goodies for lunch were cheap, tasty and plentiful! For two tables (20pax) here are the dishes and prices, starting from top left (the green tofu) clockwise…

The bill came up to RM24 per head! My favourite was the Ginger Wild boar (who would dare prepare the mighty boar this way, for fear of the gamy smell of the boar? This place did it to perfection – smooth, tender and not a trace of gaminess on our tongues!). The butter ribs were excellent too. 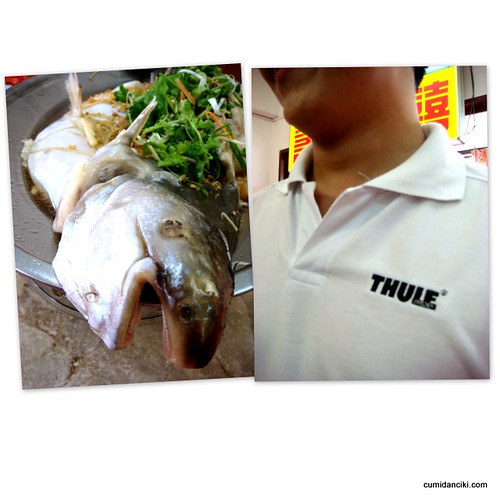 Of course, of special mention is our dear friend Thule/Leo, who so kindly provided us a large river Patin Fish to be added to lunch since we were in his home town. The photo does not do it justice as the Patin was huge at 3.5kg! According to Leo, the fish came from his friend, Ah Kao, whose fish farm is famous for rearing fishes free from any muddy taste – a characteristic of river fishes. His fish is reared in Sungai Lipis. (surprise, surprise:P) The fish was halved for our 2 tables, steamed in soy sauce, sesame oil, topped with fried garlic bits and garnished with corriander leaves. With a prized fish being this fresh and in the hands of a good cook, we don’t need to tell you how good it tastes.  Both tables left only its bones and head on the platter. The fish being a present from Leo, the cooking came up to a whopping RM8.00!

After lunch we all said our goodbyes and began our slow drive back towards KL…. with some stopovers.. 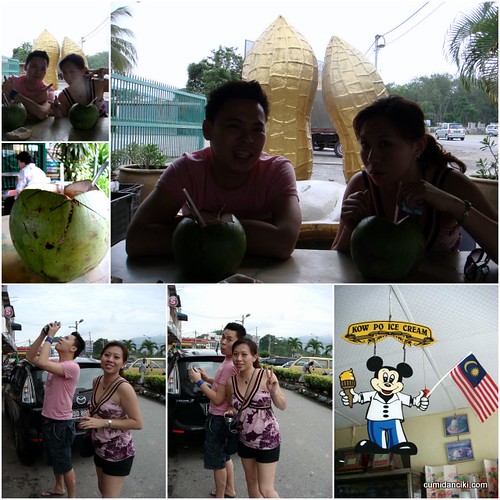 Later, C&C, Munkey and Missy Chocoholic went on a hunt for the famous ground nuts in the Sempalit area .. and found it! We made a pit stop to try the peanuts and to drink some sweet pandan coconut. 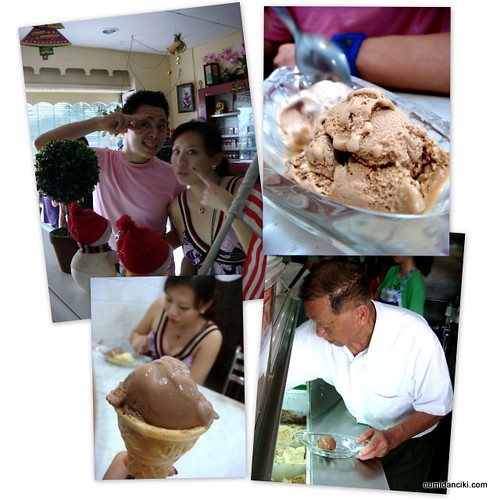 We also stopped at Bentong for the legendary ice-cream at Kow Po. (For past Betong, Pahang posts, click here). The 74-year-old man, fondly known as “Bentong Uncle Ice-Cream”, is famous for his ice-creams and ice kacang, in this small town. My favourite was the Peanut ice-cream.. tasted like frozen milky peanut butter. Kow Po is a real 1Malaysia spot as all ethnic groups congregate here cheerfully to enjoy a simple dessert. In the background we even heard non-Chinese speaking chinese to the owners.

Tan, a true blue Teo Chew man, who inherited the ice cream business from his father, has now passed it down to his two sons, Jeff Tan, 48 and Michael Tan, 40. Tan’s daughter-in-law, Helen Ng also helps out with the business. 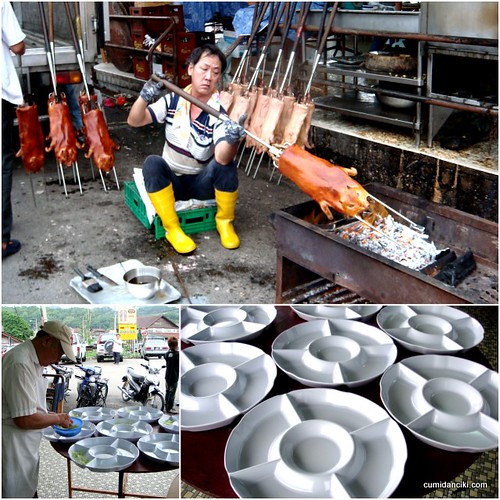 For some exercise, we took munkey and chocoholic on a walk around the  not-so-sleepy town of Bentong. At a corner restaurant, we found people scurrying about like mad-caps, preparing for a wedding dinner. The highlight was the sifu busy roasting the suckling pigs by the side of the restaurant together with an assistant, who applied coats of secret sauce in between roasts. We were contemplating grabbing a skewer and making a run for it..  but unfortunately we had over-eaten throughout the day, and feared our legs would not carry our extended tummies fast enough 😛

All in all a great lunch and a fantastic outing with the gang. We hope to do this again soon!

Sekinchan is the rice-bowl area of Selangor. It is located in the Sabak Bernam district and is one of two major rice producing districts…