A text message from bubbly Ms. Chan reminded me of a turkey dinner that was to happen, in 2 days. Part of the message stated “…come with your appetite…” Now as I recall from our last meal at Chef Choi, we were surprised by the quantity and quality of food served, that left us stuffed, for want of a better expression, like a Christmas turkey. So  I guess you could say, that a warning had been sent and being alone on this dinner (Ciki is now traipsing down streets of London), preparations were needed for this feast which meant a workout regime to shed some major body fat reserves!

After hundreds of km of cardio, crunches, push-ups, umpteenth leg curls, pull ups…. and some weights toning, I was ready to return to Chef Choi with the appetite of a hungry ghost! 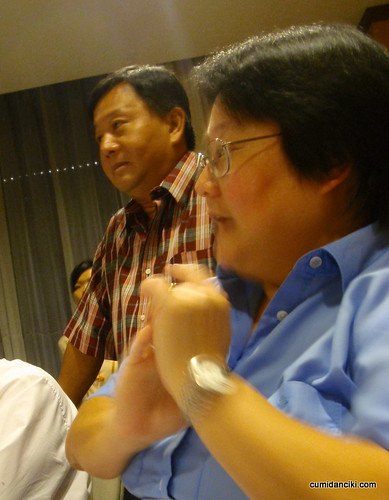 Arriving at the dining room, I was greeted by Ms. Chan’s brother… um… Mr.Chan… who was in the middle of stirring up the guest’s appetites with his intelligent humour on food preparation, cooking and food odysseys. Besides the usual suspects of Boo, Lemongrass and Marian Eu, also in this food onslaught were close friends of Ms. Chan. All of them not dissimilar to me, were serious about their food but different in the way that most of them were ‘old school’ or  how they write today “ol’ skool” foodies with vast international travel logs of gastronomic escapades. I was merely a chick in the coop.

Whats on the menu? Jerryfish? Can’t wait to find out what it is. Apparently most of these dishes were not on the usual menu and were specially ordered. We were informed that patrons can always bring in their own raw materials to be cooked up by their chef.

For starters (not listed in menu), we had homemade chicken liver pate and siew yoke (Baked pork belly). Yum! 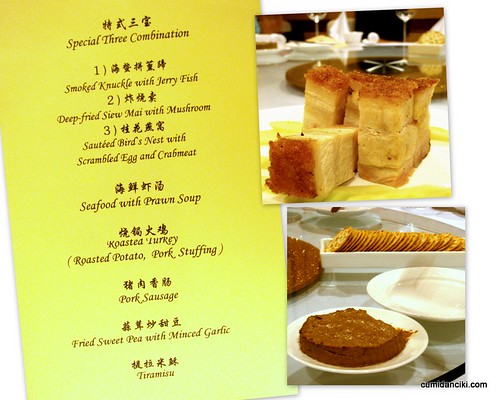 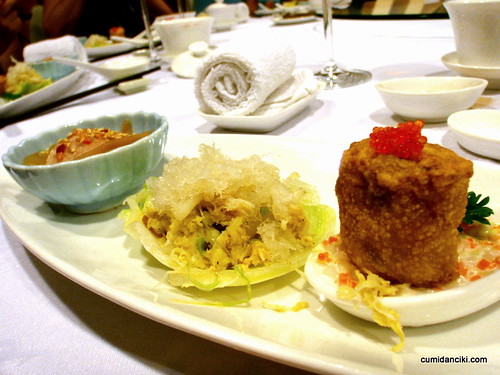 Then, we were treated to Hairy Crabs. Another surprise not listed on the menu. Hairy crabs aka Mitten Crabs are apparently popular in Shanghainese cuisine and seem to be currently in season now. They weren’t very big in size and Mr. Chan,  explains these sizes, in this season, provided the best meat texture and tastiest roe. 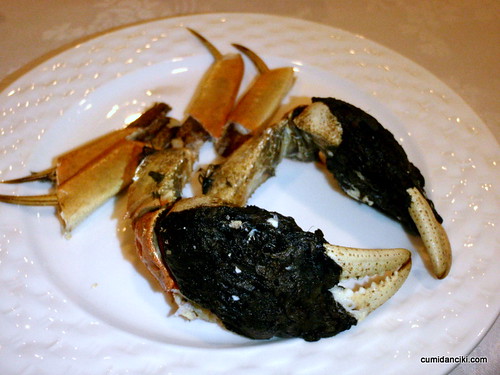 Albeit an allergy to crabs, lobsters and prawn, I simply had to taste these yummy crustaceans. Simply steamed, we were presented with 2 different servings; appendages and body/head. The head, split open for us, only needed a teaspoon to dig the rich creamy roe from its recesses. Further testimony to its taste was given by Lemongrass as she entertained the rest of the portions. The meat from the appendages were sweet – just as it should be. 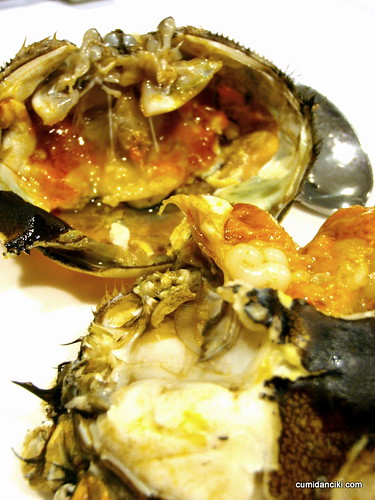 Seafood with prawn soup. Someone exclaimed prawn bisque! Yes it was. Again, the fresh ingredients cooked just right with a thick prawn gravy base was savoured quickly by all. Even me. 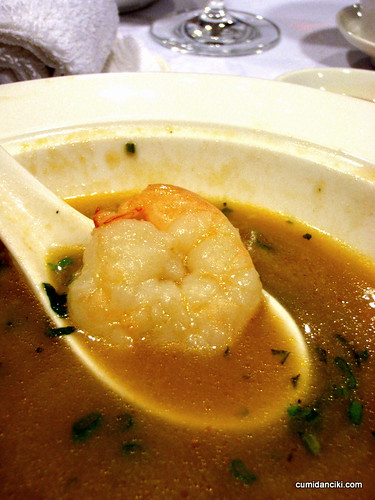 Now the piece de resistance! Always wanted to use this avant garde statement and this might be the precise time or may be it isn’t. Nevertheless, this is what we were all waiting for.
Roast Turkey, Roasted Potato, Pork Stuffing, Pork Sausages, Fried Sweet Pea with Minced Garlic and sauces.
They saved us all the trouble of carving a giant turkey as we were presented with a sliced platter. 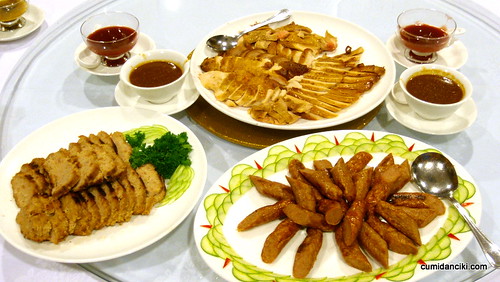 The turkey cooked just right and unlike the numerous turkey’s I’ve had it in America – dry, hard and usually recycled over several days of festivities. Porky sausages were nicely grilled with a good bite, fried sweet peas were bursting with flavor enhanced by wonderful pungent minced garlic. Pork stuffing which had to be my favourite, was moist and so damn tasty .. so tasty that I didn’t even douse it with the sauces!  The ensemble was decorated with various green salads to add balance and color to this otherwise meaty ensemble. An excellent year – Chateau Cantemerle 2004, to go with the meat. 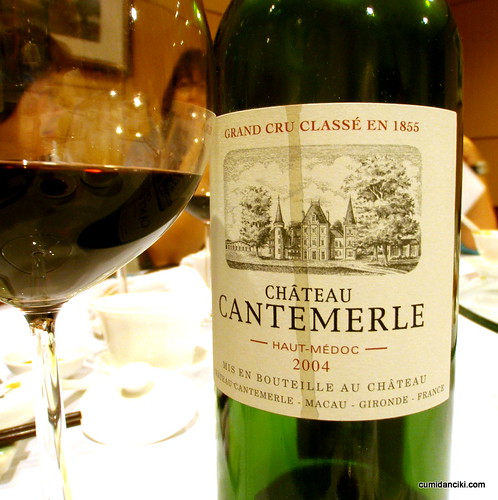 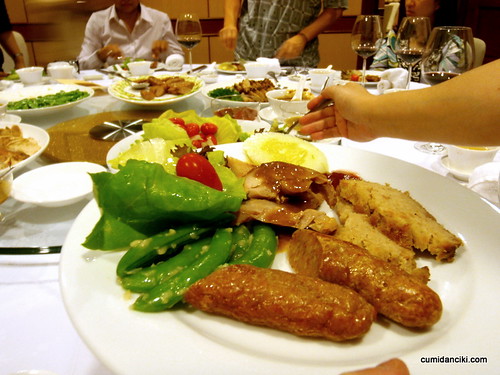 After 2 large helpings served by Ms.Chan’s deft hands and ever so hospitable manner .. i.e., if your plate is within her reach, you will eat double or triple portions even  (Note to myself: must not sit next to her again!), I had to stop to save space for dessert.
What i thought were Marshmallow Pies– yes I can only think of US or Oz mom & pop store snacks, were  in fact Alfajores, a south American snack made of chocolate biscuits cemented together by a jam center, then coated with  chocolate. Beyond the sweetness and caramel type jam, I tasted a hint of lime. Unique I thought. 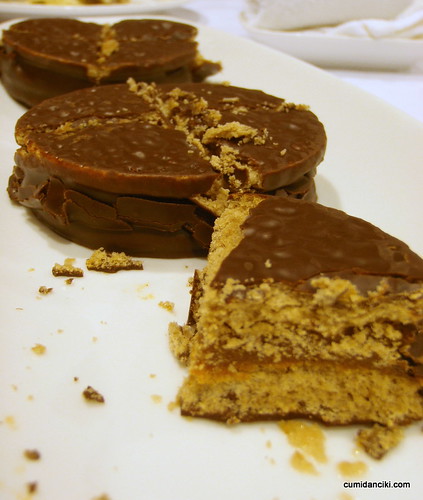 (Virgin) Tiramisu – as Mr. Chan jokingly called it since it was without alcohol:(. The Tiramisu was a wonderful ending to the well prepared Chinese-Italian-South American-French ‘Thanksgiving’ meal. I love desserts! Sinfully rich and creamy, I had (again) 2 large helpings due to my hospitable host and then some to take home. 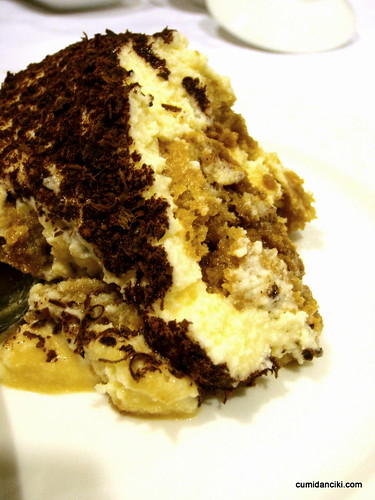 I have always been rather indifferent to Chinese banquet food. Some are mediocre, and some are better than others,  but none have ever, been really outstanding. Here at Chef Choi’s, I’ve found their dishes and tastes to exceed my expectations. Having passed by Chef Choi for many years without ever wondering about the food they served and how they compete with the other popular Chinese restaurants, especially at such a prime spot, I feel like I’ve been handed a parchment of revelation. Now that I’ve walked in, filled my plate and coated my palate, I have to say I’ve arrived at a really good Chinese restaurant which I can always recommend to others. Thanks to the Chan’s for inviting Cumi & Ciki.

Check out the previous write up on them.

OK, so let me just go on a bit, about the best dining experiences we had all week. Brasserie 25 @ Hotel Stripes Kuala…