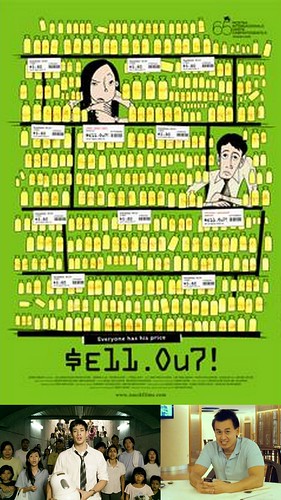 Her name is Rafflesia Pong! (eww, wot’s that smell…) She’s a bottom-ranking show host who’s disillusioned with those overrated underachievers we call “artists”. He’s Eric Tan, a product designer who’s just about to learn that it doesn’t pay to be creative. They both work for FONY, a multinational conglomerate whose mission statement, copied from a Taiwanese company, is to be original. In the face of such pressure, Eric and Rafflesia are questioned whether they will retain their artistic integrity or will they finally sell out to fame and fortune! Our good friend Wai Hoong (and one of the actors in Sell Out! – erm, I won’t tell you what role as I don’t want to spoil to for you, but just check out the size of the muscle on him in the show! ), invited us to the premier of Sell out! … hence our post movie, midnight snack at Ri-Yakitori, The Gardens. 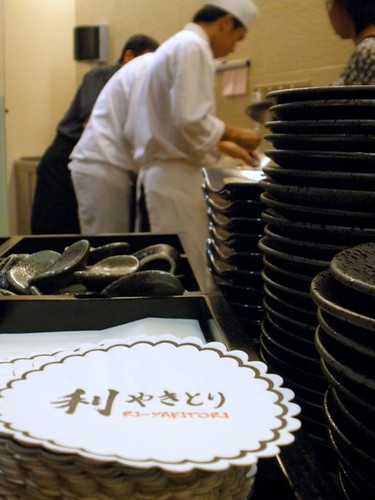 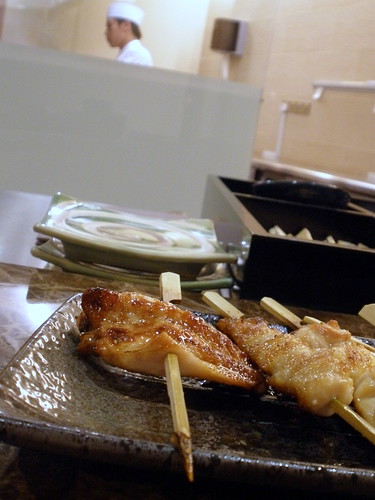 I mean from the leg to the breast, the skin to the ass, it’s all chicken.

Which reminds me of this joke, called “The 3 legged Chicken”, ahem…

A man was driving along a free-way when he noticed a chicken running alongside his car. He was amazed to see the chicken keeping up with him, as he was doing 50 mph. He accelerated to 60, and the chicken stayed right next to him. He sped up to 75 mph, and the chicken passed him. The man noticed that the chicken had three legs. So he followed the chicken down a road and ended up at a farm. He got out of his car and saw that all the chickens had three legs. He asked the farmer, “What’s up with these chickens?” The farmer said “Well, everybody likes chicken legs, so I bred a three-legged bird. I’m going to be a millionaire.” The man asked him how they tasted. The farmer said, “Don’t know, haven’t caught one yet.” 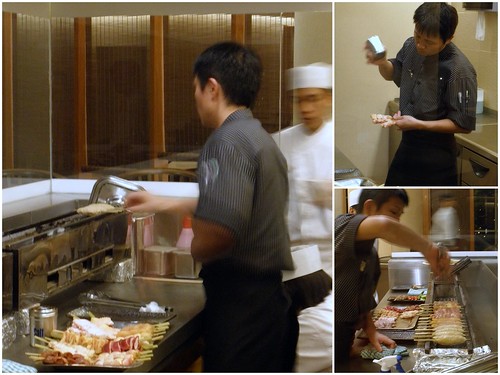 Anyway, they don’t serve 3 legged chicken at Ri-yakitori but from the massive amount of chicken skewers they churn out, it sure seems like it. 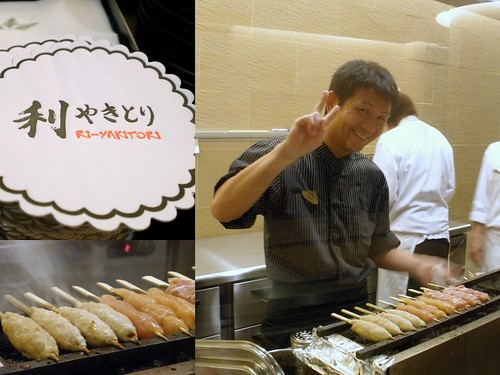 Of course I was really nice and made friends with the Japanese Chef.. afterall he’s cooking my chicken ass and I don’t want to give him any reason to poison me now do I:P

Ass you say? Well don’t be chicken-s*** … ! what’s the point of walking into a chicken yakitori bar and not having the works. You’ve just got to try it all! 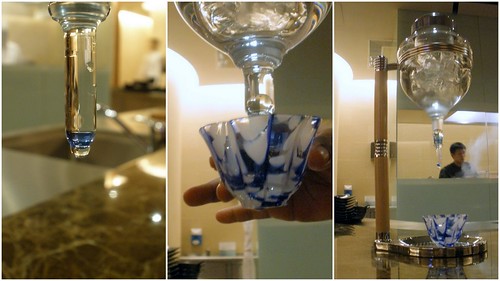 Ri-Yakitori is an unusual restaurant because of the way it utilizes the entire chicken and because the bar concept is rather contemporary set against a traditional Japanese mood. Ri-Yakitori also has on the menu, many traditional Japanese cuisines apart from the normal grilled Yakitori, which means you can actually eat other Japanese dishes here too. I obviously love it because l am a big fan of most animal spare-parts whilst Cumi likes this place possibly only half as much as I do, as he prefers only chicken white meat (i.e. that’s pretty much half the chicken he won’t eat la, right?!)

So, remember to check out this cool little place tucked away on the 7th floor of the Gardens hotel the next time you swing by for a movie … and don’t forget to go watch Sell-Out!

Footnote:
1. don’t be chicken s*** … use the Olympus Bald Eagle (new model) cheap cheap! i did and look now nice my shots are:P
2. a big thank you to Jason of Ri-Yakitori for bringing out the sake contraption even at that late hour. you are the best;)