South Korean Celebrity Chef Edward Kwon recently returned to Kuala Lumpur for a four day Korean gastronomic promotion at the InterContinental Kuala Lumpur. From the 21st to 24th April 2015, gourmet food enthusiasts had the opportunity to taste traditional Korean dishes with a twist of western cooking as well as ingredients.

We were invited to experience Chef Kwon’s menu specially prepared for the Celebrity Gala Dinner which was held on the 24th of April 2015 at the Grand Ballroom. That evening, we dined at Tatsu instead.

Our entrees started with Hae Mul Nang Chae and Soft Bean Curd. Diners at the Gala would have had the option of choosing either. 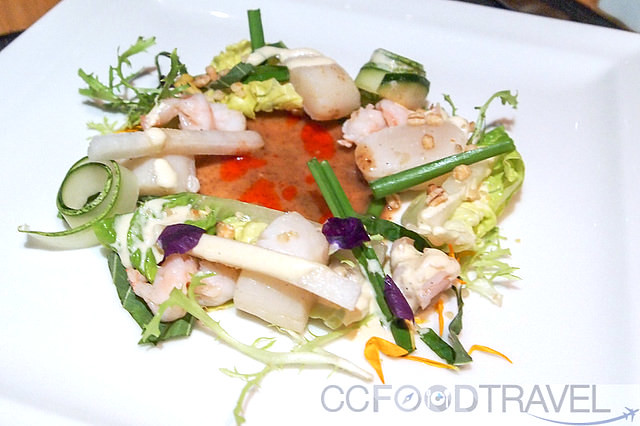 A salad of julienned pears, prawns and halved scallops with sauce of wild perilla seeds (deulkkae or wild sesame) and Korean yellow mustard. Some bits of fried dehydrated barley added textural crunch. A light healthy dish intensified with the rich, earthy taste of the perilla sauce. 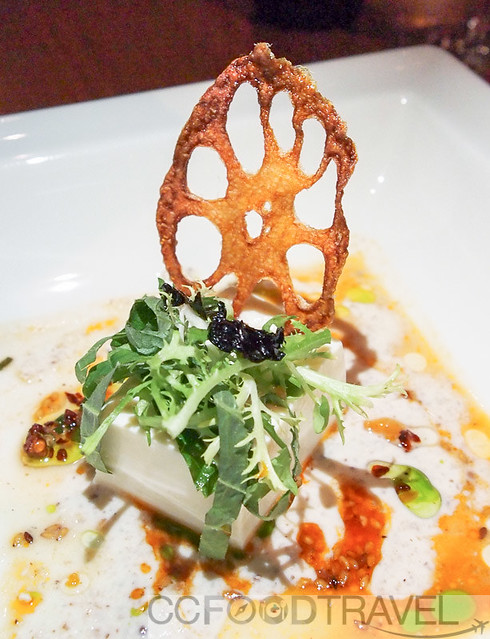 Another healthy dish that was light on the palate and on the waist. Cold silky smooth tofu placed over a black sesame dressing with crispy bits of garlic and a fried lotus root. The bland taste of tofu was flavored with Korean herbs and flecks of pungent sesame. Some chose to break up the lotus root and mix it all in, but I saved it until the end and ate it like a potato chip. It was delicious. 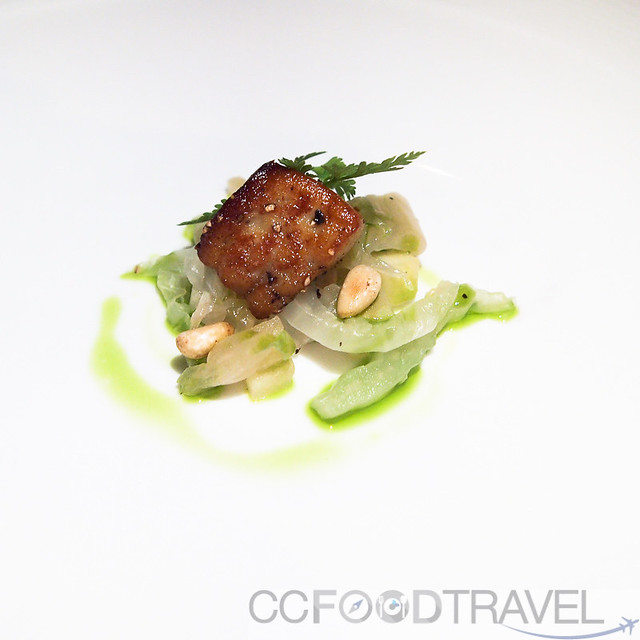 A Korean dish with French ties. A tiny cut of pan fried goose liver served on a bed of kimchi apple slaw and toasted pine nuts, dripped with healthy crown daisy oil then drenched with a thickened white soup stock (veloute). Traditional Korean dishes have a focus on healthy balanced eating. We would imagine the kimchi slaw and crown daisy oil added balance to the tiny morsel of fatty liver. Crown Daisy (sukgat aka Chrysantheum Greens) is a grassy, herbaceous green vegetable used in many Asian dishes for its unique flavor and healthy properties (chlorogenic acid, potassium and anti-oxidants).

This dish was paired with a choice of warm or cold sake. 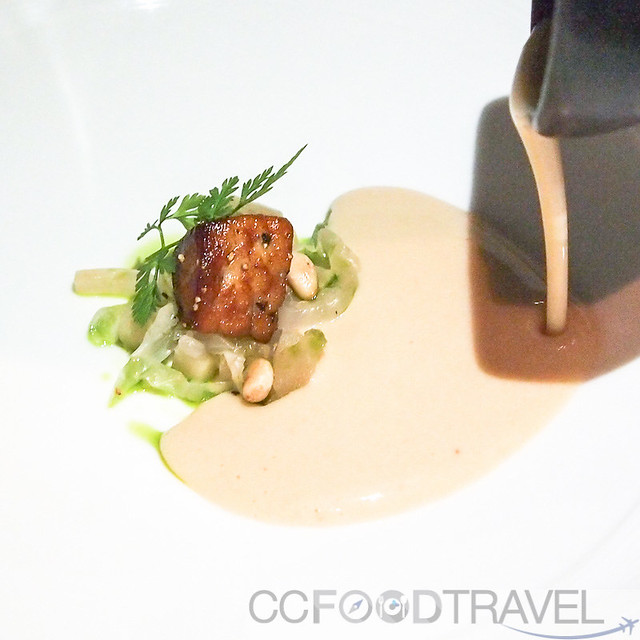 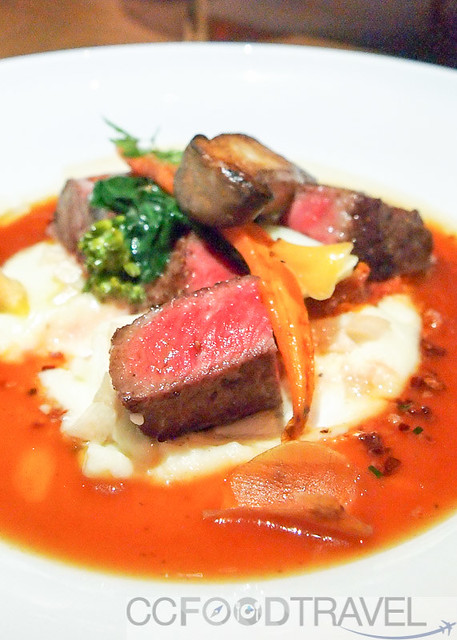 Wagyu Grade 6 rib eye grilled to medium perfection on a bed of potato mash and vegetables of carrot, broccolini, bok choy greens, and king eryngii mushrooms, then drenched with bulgogi sauce. Need we say more about this dish? This steak dish found its partner in crime, in the Penfolds Koonunga Hill Seventy-Six Shiraz Cabernet. A fine pair if I ever saw one. 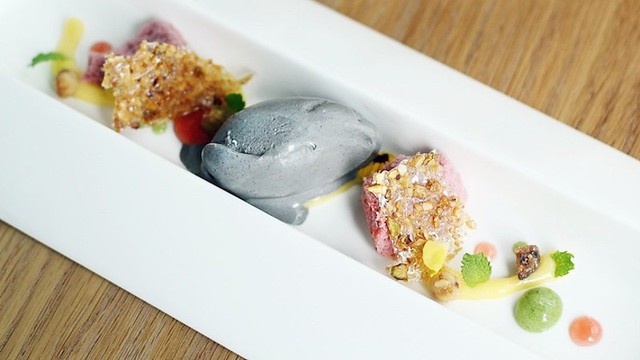 A dessert of a deconstructed cake of unknown origins. A dollop of black sesame ice cream was accompanied by torn bits of chiffon, made with korean black raspberry fruit wine (bokbunja), nut brittle, yuzu curd and basil gel. Sweet, sour, citrusy, nutty, and herbaceous flavors fell on our taste buds. Yuzu, a citrus fruit of East Asian origins, is aromatic and tart. It is commonly found in Korea as a herbal tea (yujacha) as well. 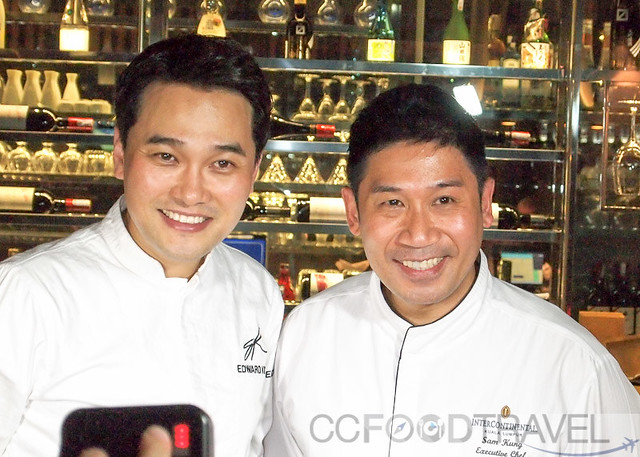 Chef Edward Kwon is a very well known in Korea due his extensive work in hosting television cooking programs, appearing on talk shows, authoring several cookbooks, and being the owner of 2 popular restaurants in Seoul. With his extensive work exposure from USA, China and United Emirates, he has developed his own unique style in whipping up recipes that appeal to both the Asian and Western palate. When in Korea, he is known to apply more Western and European style cooking techniques in his kitchen while on his travels abroad, he becomes an ambassador of his country’s cuisine, promoting traditional Korean food outside of the ubiquitous Korean barbeque stereotype.

We had just heard Chef Kwon on a local business radio talk show several days before meeting him. He was exactly as he sounded on the radio – comical, affable and well spoken in his Korean accented English. What the radio couldn’t show was his youthful, good looking features, which we captured on camera!

What a great dining experience. We certainly look forward to future encounters with Chef Edward Kwon’s cuisine.. and erm, possibly in Korea.