We were back at Villa Danieli last week for an Allegrini wine dinner.

The best of North Italy is embodied in the wines of Allegrini, so I am told. The family-run estate that have been working the vineyards since the 16th century and are famed for being Amarone producers. The showcased wines Palazzo della Torre, La Grola and La Poja leave no doubt as to the intense yet elegant wines that can be made in this lush, hilly area in the foothills of the Monti Lessini. Three grape varieties dominate production – Corvina, Rondinella and Corvinone. However, other varieties are used in lesser quantities, such as Molinara and Oseleta. 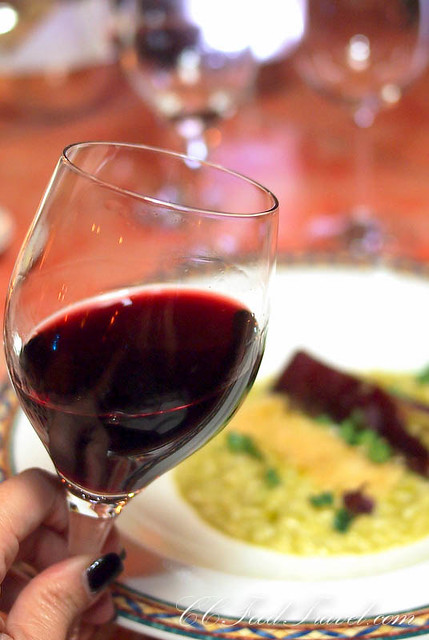 For this dinner, we would be pairing a 4 course meal with some Allegrini wines.

We started off with an amuse bouche of Polenta Crostini, quickly followed by a Caramelized Wild Mushrooms and Fried Oyster starter served with Salsa Verde Ceviche and Cured Prawns. Both were paired with Allegrini SOLOSOLE Vermentino Bolgheri DOC 2013. 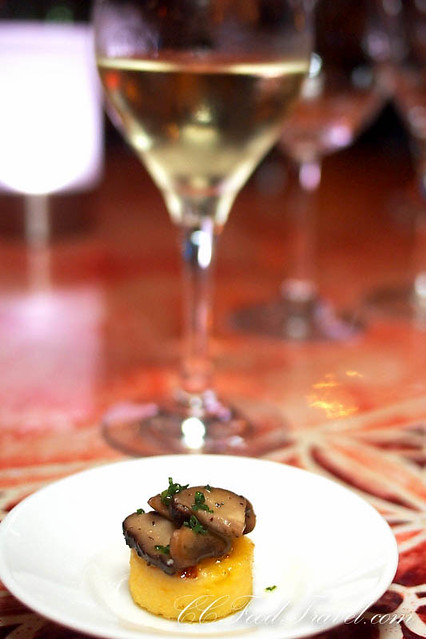 The Polenta was a bit thick and stodgy. I would have preferred it sliced a little thinner as it kind of overwhelmed the mouth with a thick and stodgy texture, making it difficult to swallow. 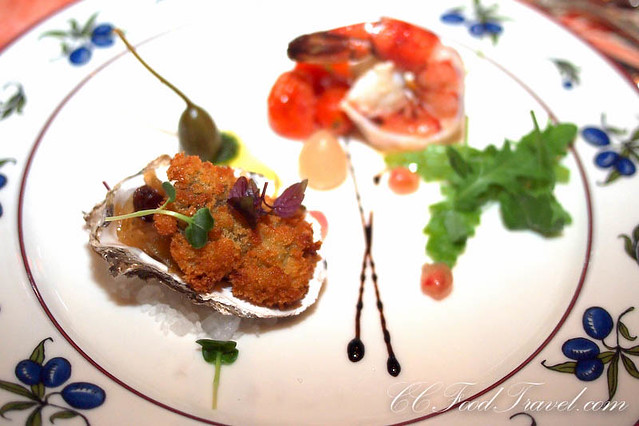 In the first starter, the Fried Oyster was over battered, over-fried and dry – I would have much preferred just a simple live Oyster served in it’s shell. The pairing of these first two dishes with the Allegrini SOLOSOLE Vermentino Bolgheri DOC 2013 was just OK, but not great. It kind of made the Oyster taste odd. The wine in itself though, was nice. The great virtue of this Vermentino is that it enhances the aromas and flavours peculiar to Bolgheri. Its clean, crisp flavour are its distinguishing features. The grapes are harvested when their colour changes to an intense yellow. The name Solosole, meaning ‘just sunshine’, derives from the fact that the wine is essentially a direct result of the work undertaken in the vineyards and the ripening sun. Not a bad wine. 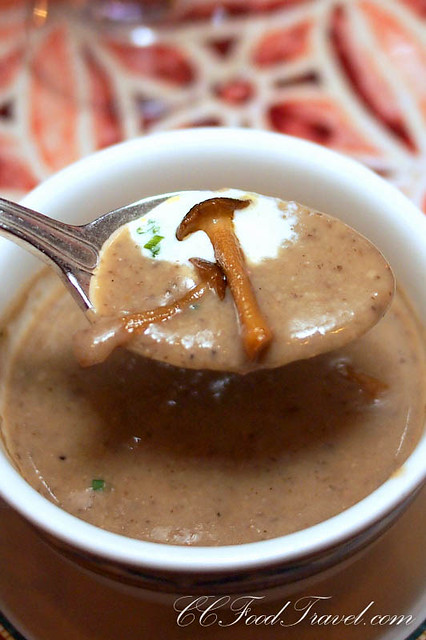 Then we were served a wild mushroom soup, paired with the Allegrini La Grola Veronese IGT 2010. This was an easy to drink red that showed some maturity but probably needed to age more. Full-bodied, ripe berries, with smooth tannins it went down rather easy.

Fatboybakes decided to help himself and us, the the black pepper. 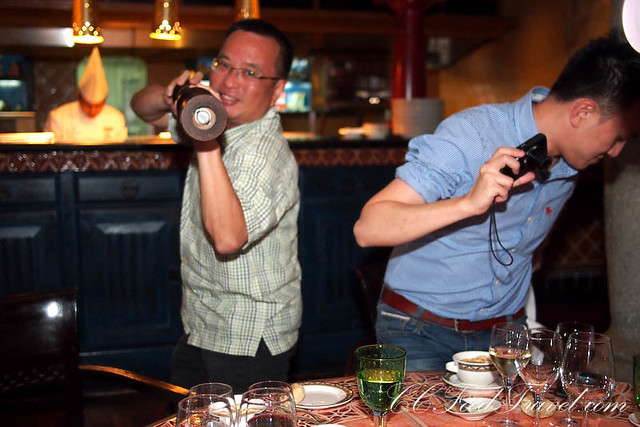 Eddy: “OMG I think I saw his marbles here somewhere”… 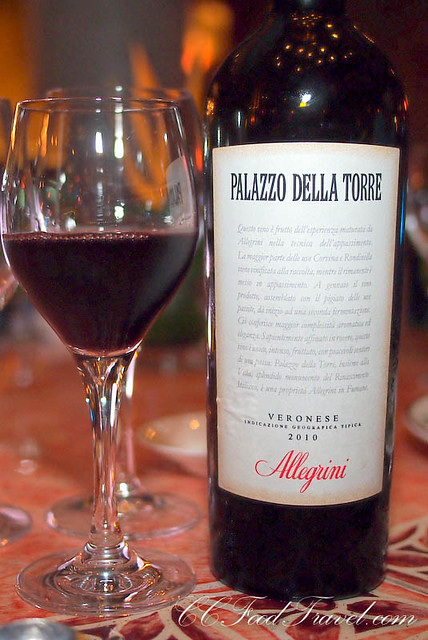 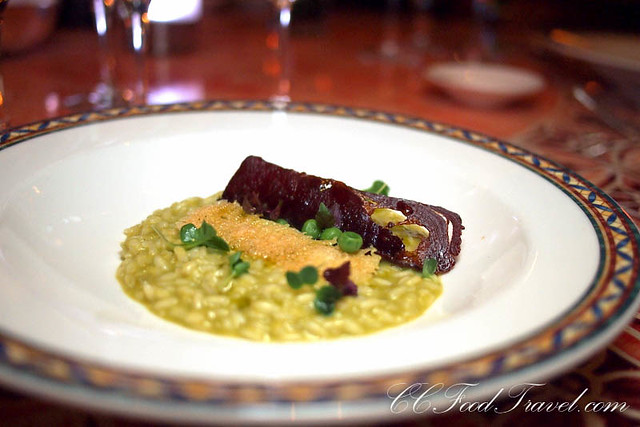 Allegrini affectionately refers to Palazzo della Torre as its “baby Amarone.” This blend of 70% Corvina Veronese, 25% Rondinella, and 5% Sangiovese is a smooth, full-bodied cru wine made in an innovative ripasso style. Ripasso is a red wine from the Valpolicella zone located north of Verona in the Veneto region of Italy. Ripasso is generally less well known than Valpolicella and Amarone wines, also from this area, even though it shares some features of both wines. 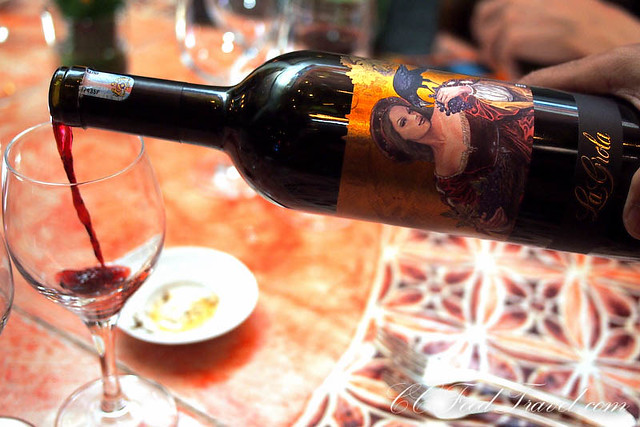 For the mains there was a choice between Stew Grouper fish in Cream with Grilled Asparagus, Fennel and Mashed Sweet Purple Potato or a Grilled Beef Ribs with Sage Butter, Spinach Gnocchi, Endive and Natural Jus, to be paired with Allegrini Amarone della Valpolicella Classico DOC 2008. 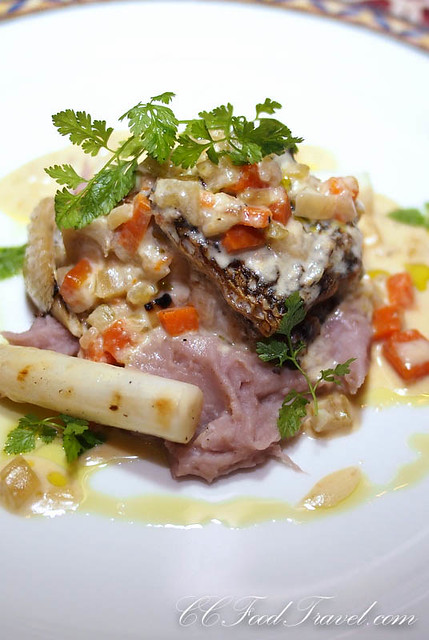 I had the beef (it wasn’t a steak, but more like soft braised ribs) which turned out to be the better choice. The fish was overcooked and dry. Dry, full-bodied and richly textured, this 2008 Allegrini Amarone della Valpolicella is wonderfully mouth-filling on the tongue – a good complement to the rich, sweet caramalized beef ribs, which were fall off the bone tender. 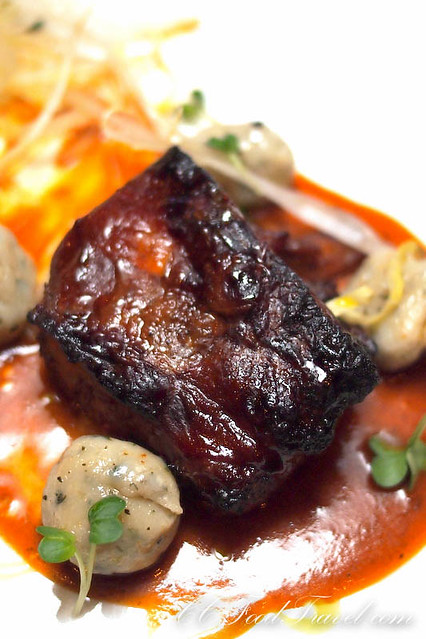 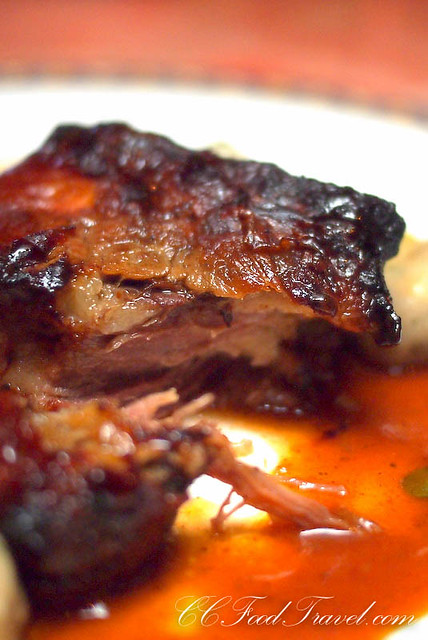 The meal ended with a dessert of Mascarpone Cheese Mousse Millefoglie with Chocolate Salami, Berries Compote and Sable Crumble, aired with Giovanni Allegrini Recioto Classico 2010. Peppery is the word that comes to mind drinking this wine! The nose is bursting with fruit, followed by fresh floral notes and pepper. The sweetness on the palate is well balanced with acidity and tannins – definitely a good pair for the dessert. 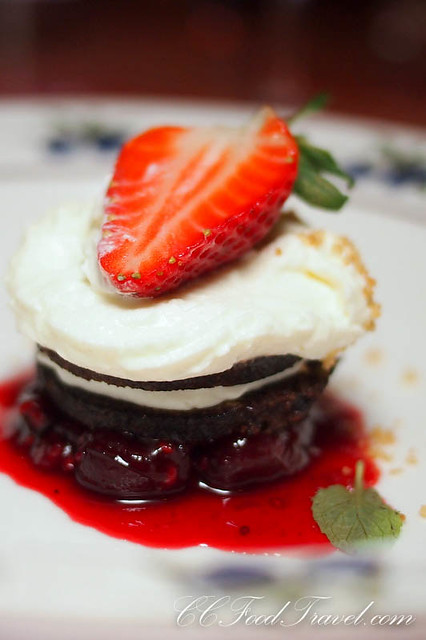 Priced at RM220++ per person, this special four-course set meal is only available at Villa
Danieli for dinner from 7 to 30 November 2014. For wine lovers, top it up with an additional of RM150++ and your dining experience will be enhanced with the pairing of Allegrini wines.

I remember way back when I was young, one evening after dinner, my mum was sipping on a drink and I asked her what…