The tiny island Gozo, that’s located just next to Malta is a genuine haven. It’s a great place to get away for the day – highly walkable with many great nooks, people to meet, as well as some terrific spots for lunch. 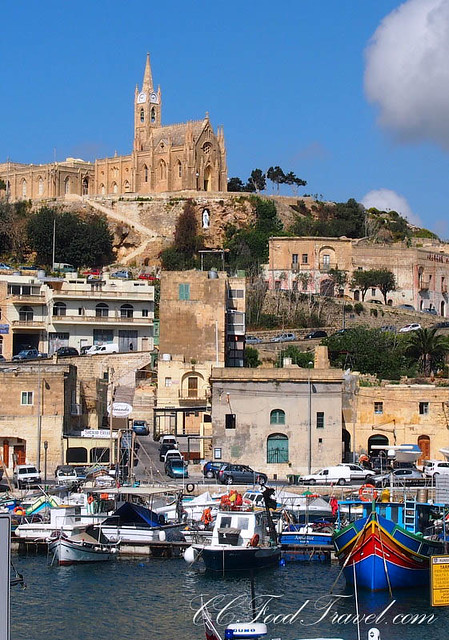 On Gozo, you will find beautiful prehistoric temples, fossil-studded cliffs, breathtaking coves, great diving sites as well as towns with loads of history and character. More rural than its sister island, Malta, Gozo has a population of approximately 32,000 people. 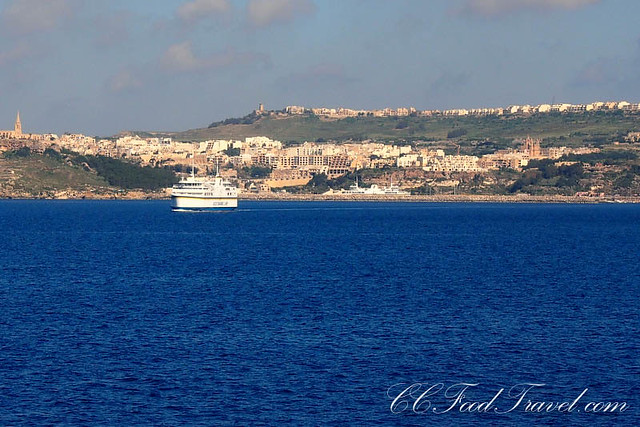 The only way to get to the island is by ferry. There are regular crossings between the port of Mġarr on Gozo and Ċirkewwa on the north-west coast of Malta daily.

The Gozo Channel Ferry makes the trip every 45 minutes during the summer and almost as often in the winter. A round trip costs €4.65 and takes around 25 minutes each way. 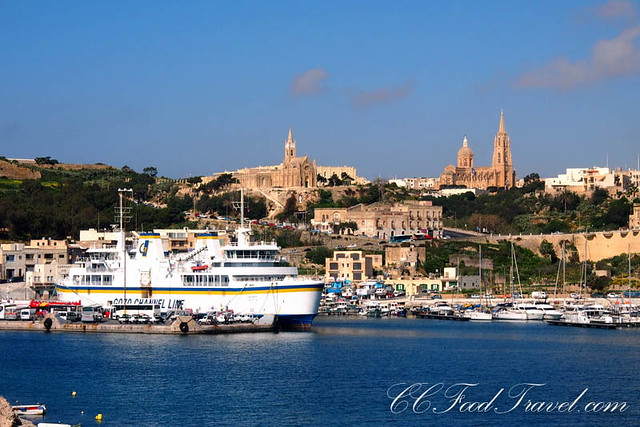 Upon arrival at Mġarr, we decided to take the ‘Hop On Hop Off’ buses, since we already had a pass for this. The bus pick up is ideal – outside the ferry terminal and operates on a timetable which is synchronized with the ferry timetables. Public buses, taxis and cars for rental are also available. 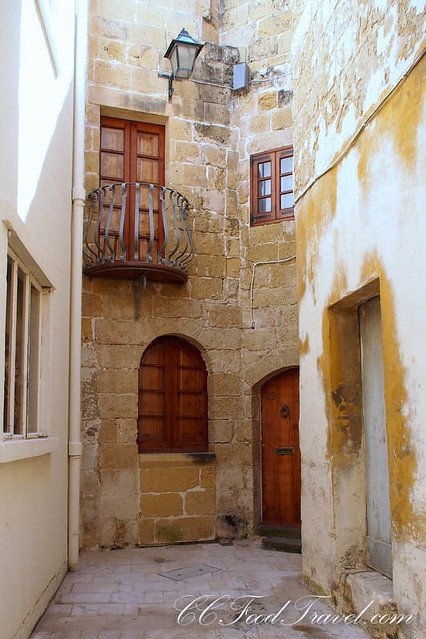 My only complaint after doing the hop on, hop off bus is that it is too time consuming. The bus only comes around every 45 minutes which means you lose a lot of time if you get off at one spot. Ideally you should rent a car (as we did in Malta), so that you can drive around the island at you own pace, and explore at leisure the spots that you find more interesting. 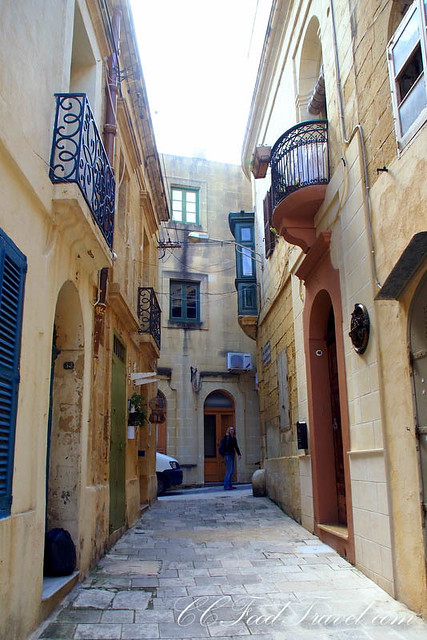 We decided to hop off the bus at Victoria, to explore the place for a bit, and look for a nice spot for lunch. Victoria or Città Victoria is the capital of Gozo. The town is tiny, and has a total population of maybe 7,000 plus only. This already makes it the largest town by population in Gozo! 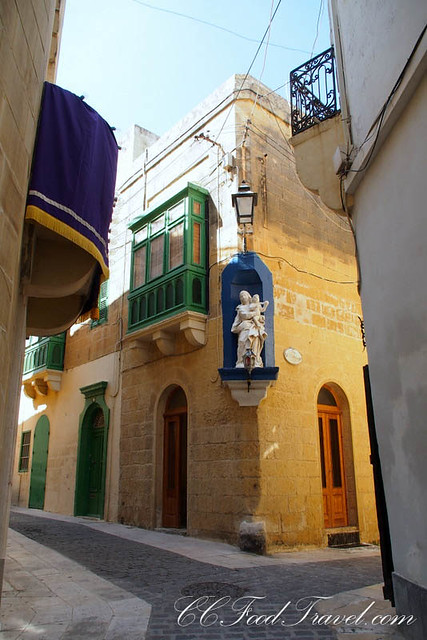 Victoria is the town’s given name by the British, during Queen Victoria’s Diamond Jubilee, at the request of the Bishop of Malta. However Gozitans still often refer to it by its old name, Rabat. 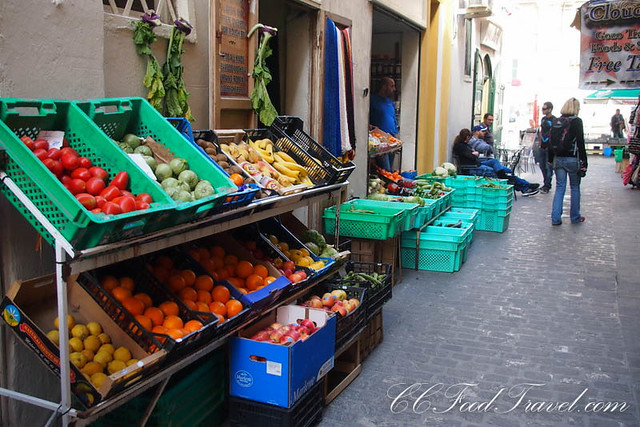 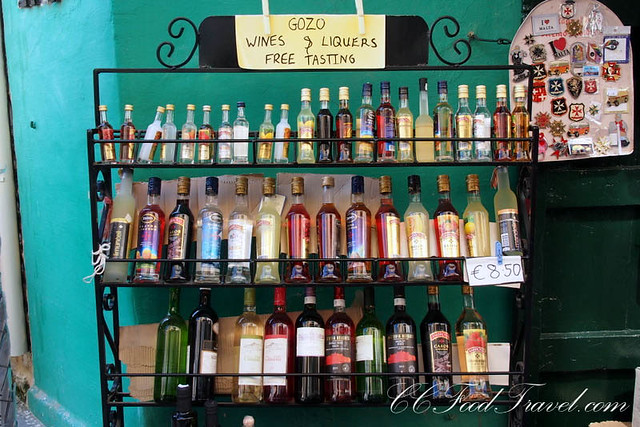 In the heart of Victoria lies the Citadella (Citadel), formerly known as il Castello, which has been the centre of activity of the island since possibly Neolithic times. It was later developed by the Phoenicians and continued into becoming a complex Acropolis by Roman times. 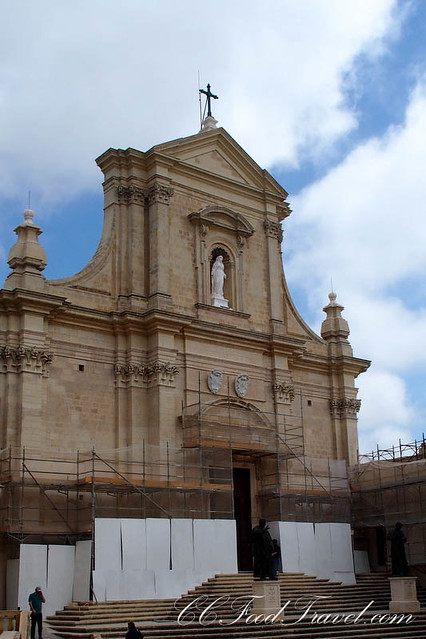 We decide to take a break here, and have lunch at Ta-Rikardu, a nice mom and pop restaurant, which has terrific views, simply because you need to climb these insanely narrow flight of winding steps, to get to the open air, roof top part of the restaurant. 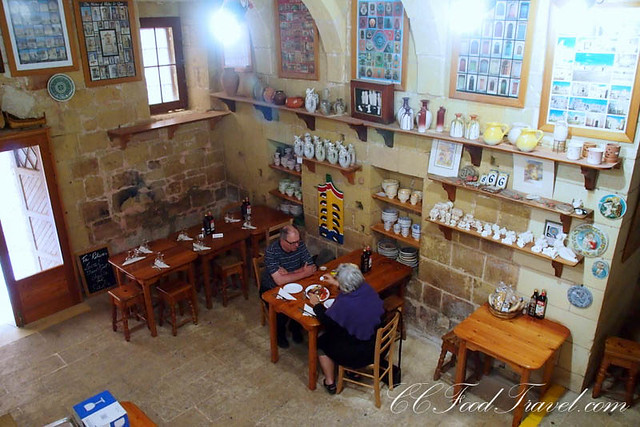 Situated inside the bastion walls, this place does good old fashioned Gozitan nosh and produces its own wines even. For just EUR4.50 you can get a bottle of white wine from Gozo’s vineyards. The wine is not that palatable, but for that price, and for the sights, we weren’t really complaining. 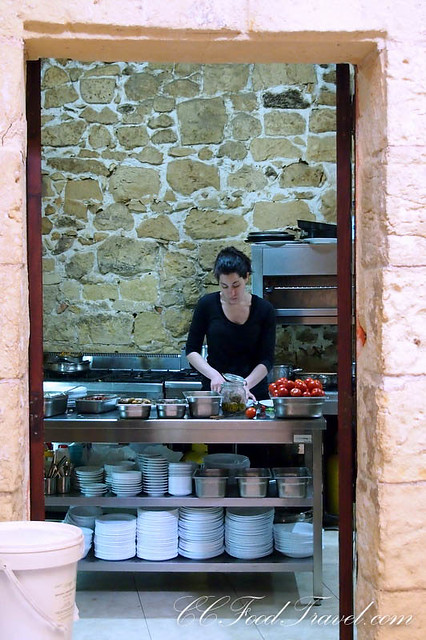 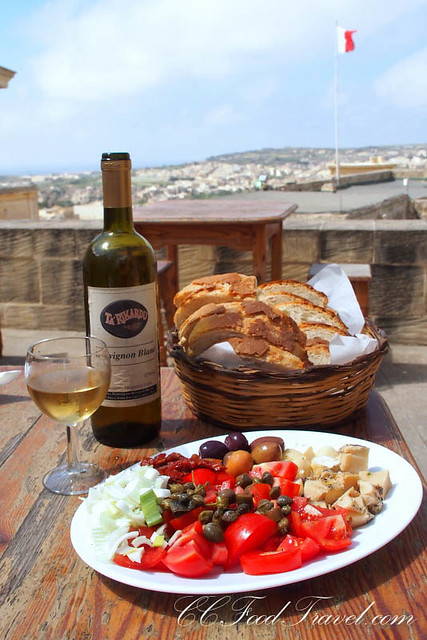 A lovely starter platter of tomatoes, capers, cheese and olives. And the infamous Gozo wine! 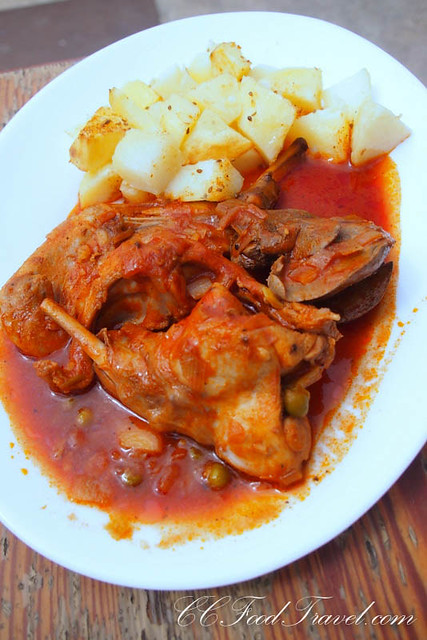 Stewed rabbit – super delicious in a tomato based broth. This came with some tasty rabbit liver bits as well as fat baked potatoes. Totally hit the spot. 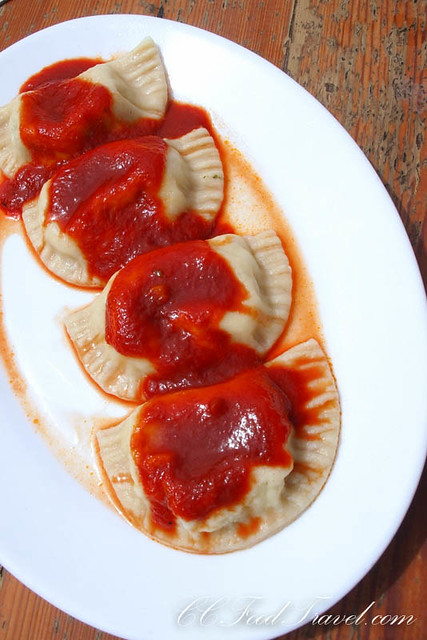 Vegetarian Ravioli that one of us had. Good but not the best she had tasted apparently 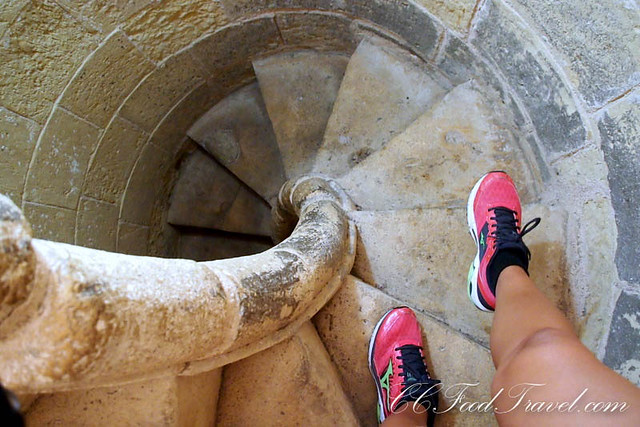 Back down the steep, winding steps. Not that easy once you’ve had a bottle of wine! 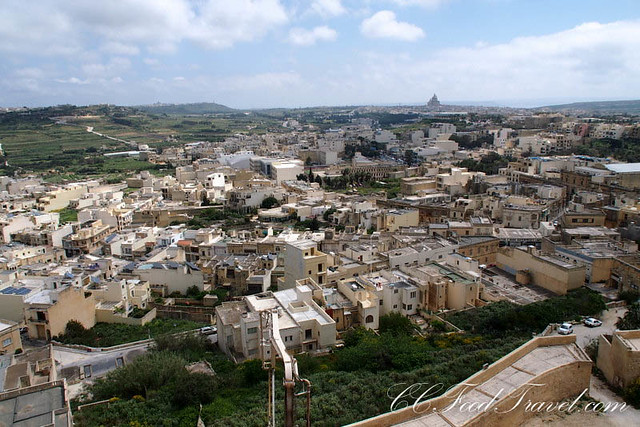 Then we went to explore the look out points from the Citadel. The north side of the Citadel dates back to the Aragonese domination period. The south flank, overlooking Victoria, was re-constructed under the Knights of St. John, namely between 1599 and 1603, after Ottomans invaded the city in 1551. The massive defensive stone walls of the fortifications rise above the town and were built by the Knights to protect the village communities from foraging corsairs attempting to take slaves and threatened invasion of Moslem forces fighting Christendom. 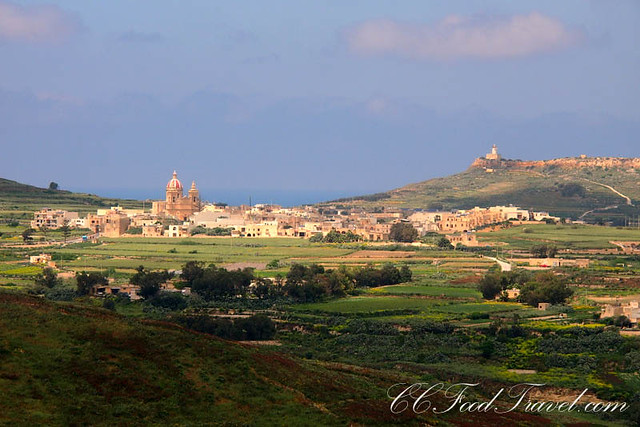 Within its walls lies a fine 17th century baroque Cathedral designed by Lorenzo Gafà, the Maltese architect who also built the Cathedral of Mdina. It is said that it lies on the site where a Roman temple dedicated to Juno once stood. It is most famous for the remarkable trompe l’oeil painting on its ceiling, which depicts the interior of a dome that was never built. 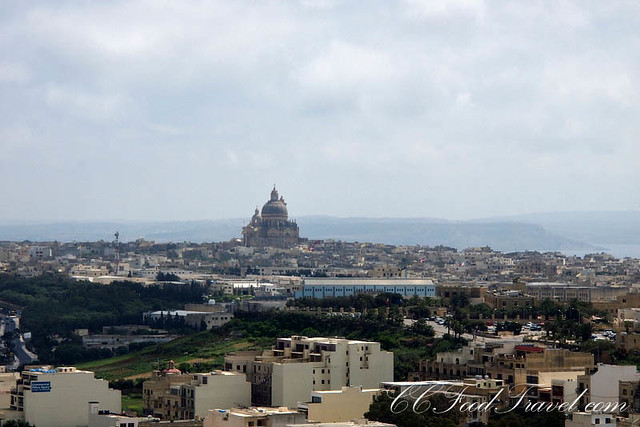 From this high point you can gaze out upon Xewkija – the largest of Gozo’s many churches is located here. Finished in 1978, its unsupported rotunda is the third biggest in Europe. So devout are the villagers they built the new church around their old one so they could continue services, then reassembled the old one stone-by-stone with their own sweat and blood. 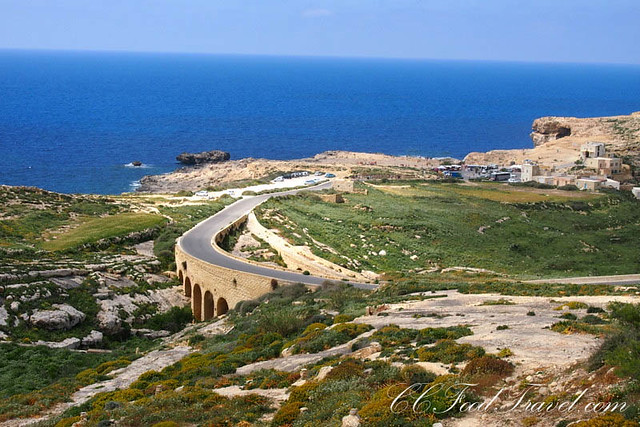 After lunch, it was time to explore, perhaps one of the most beautiful natural landscapes on earth, the Azure Window. 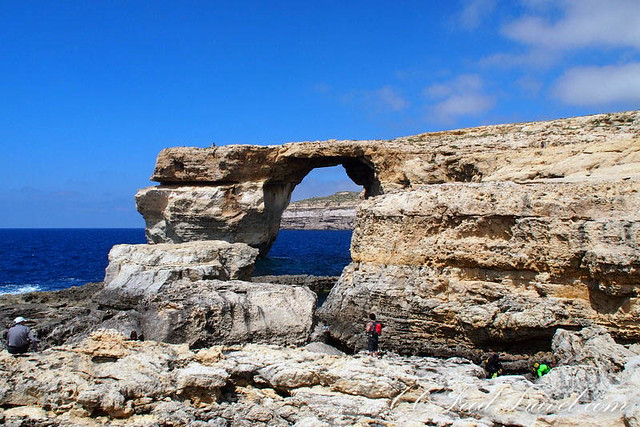 The Azure Window (Maltese: Tieqa Żerqa) is made from limestone, and has a gorgeous arch, especially when the wave crash high, inside the arch. The window is situated near Dwejra Bay on the Inland Sea. The formation, which was created after two limestone sea caves collapsed, is popular with scuba divers. 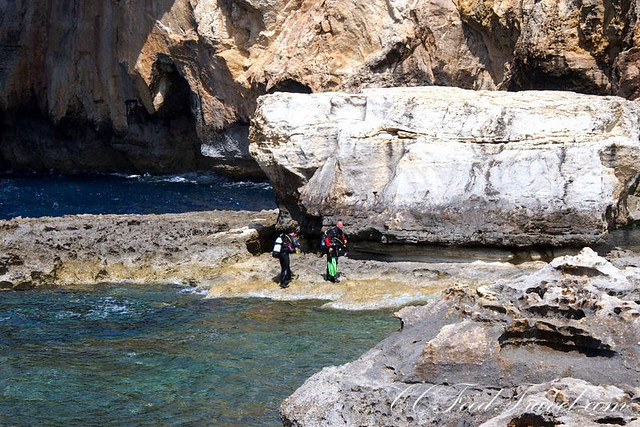 The Azure Window is made of a Maltese limestone known as Globigerina. This is the second oldest rock found on the islands and is subject to erosion. The arch is disintegrating because large pieces of rock have begun to fall from the underside of the arch. The rate suggests that the arch will completely disintegrate within a few years. 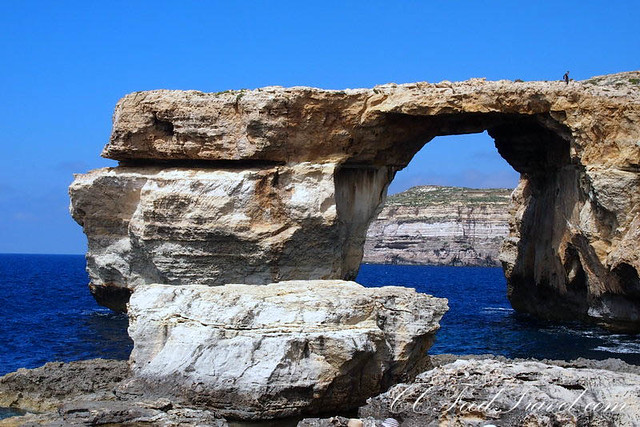 Hopefully not, as this is such a gorgeous spot! 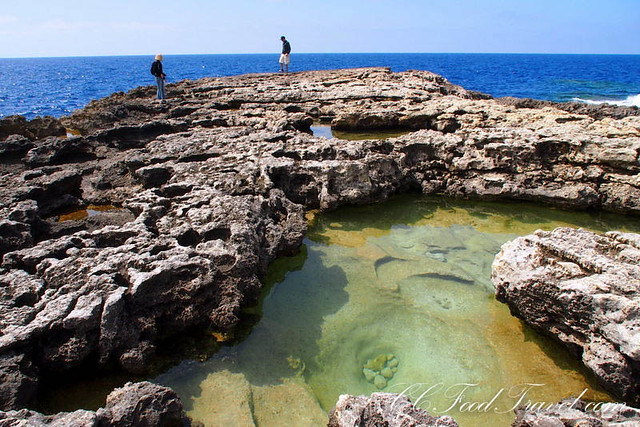 At the end of the cliff, the Azure Window is a giant doorway, through which one can admire the water expanse beyond the cliff. The sea around is very deep and of a dark blue hue, which explains why it is called the Azure Window. 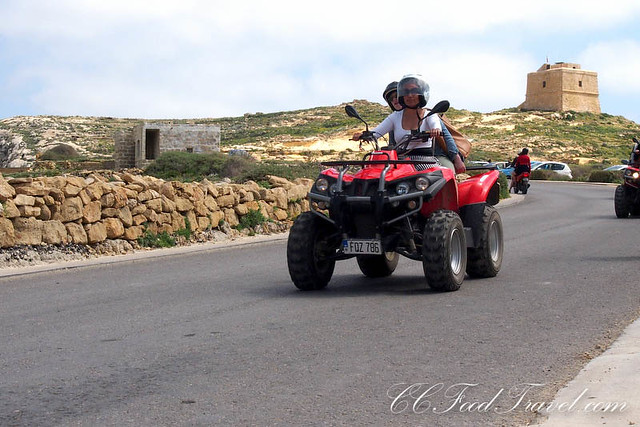 ATV off road is a fun way to explore Gozo island! 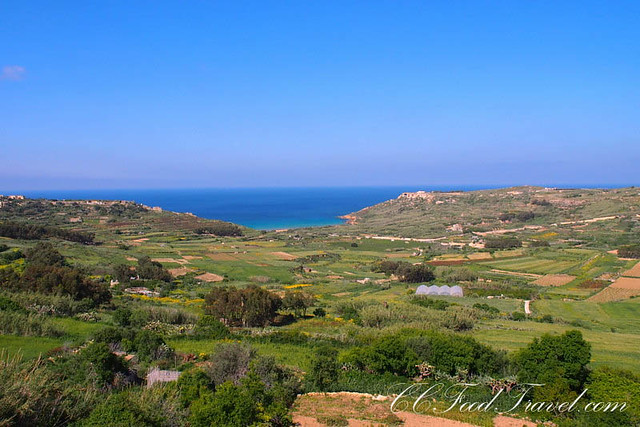 After that, it was time to catch the 4.30pm ferry back to  Ċirkewwa 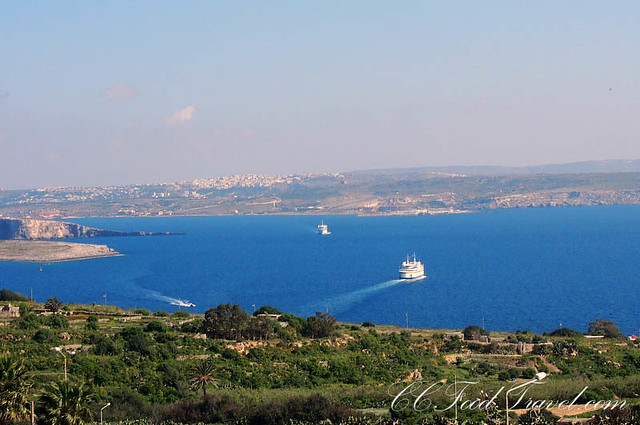 Gozo is definitely a must visit because it is has a rural charm about it, and has a huge part to play in history the Maltese archipelago, that has some of the oldest religious structures in the world. My number one advice is to rent a car and to drive around on your own, as that way, you will see more and experience more.

This post was brought to you by the Blog Island Malta campaign, created and managed by iambassador in partnership with the Malta Tourism Authority and the support of Air Malta. However, CCFoodTravel maintains full editorial control of the content published on this site.

Those of you who have seen this post, know that Nathalie’s Gourmet Studio, is the new buzz word on the street. Me, I know…