There may be only one true love, for each one of us, but there is no one true way to do dinner on Valentine’s Day. And if Valentine’s Day falls on the fifteenth Day of Chinese New Year (Chap Go Mei), well then, what we have is a double celebration.

And at DoubleTree by Hilton KL, Executive Sous Chef Eric Siew has created a lovely aphrodisiac laced menu, specially for just one night, – the 14th of February 2014, at Makan Kitchen.  These aphrodisiac Chinese New Year delicacies will be part of a one-night-only Dinner buffet on the 14th February 2014, called the “Longevity Dinner Buffet with a Twist of Love”, and is priced at RM98++ per person. This will be a very rare and special occasion to feast on Valentine’s Day yet at the same time, celebrate the final day of Chinese New Year with all the special people in your life.

And as we all know, culture and tradition play an important part in a cuisine. Certain foods with aphrodisiac status, such as ginseng, dong guai, goji berries, were coveted for their great libidinal powers by the Chinese. Others, like figs, have long been seen as erotic because of their resemblance to the female body. Well, some of the highlights of these well-known aphrodisiacs will be show cased on the 14th of February, at Makan Kitchen, as part of the Chinese Prosperity Dinner Buffet Spread. If you are looking for a little romance on the fifteenth Day of Chinese New Year, look no further – Makan Kitchen has just the dishes for you. 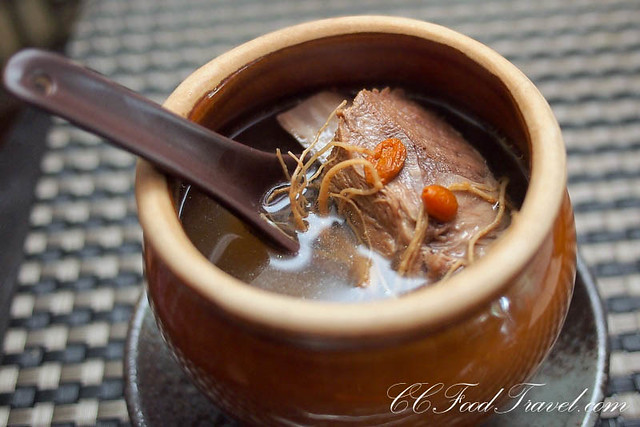 For thousands of years, cultures throughout the world have turned to certain ingredients to stimulate arousal. And Venison is game, with wild connotations. Add that to the energy and stamina giving ginseng, and what you have is a potion for love and romance in the bedroom! 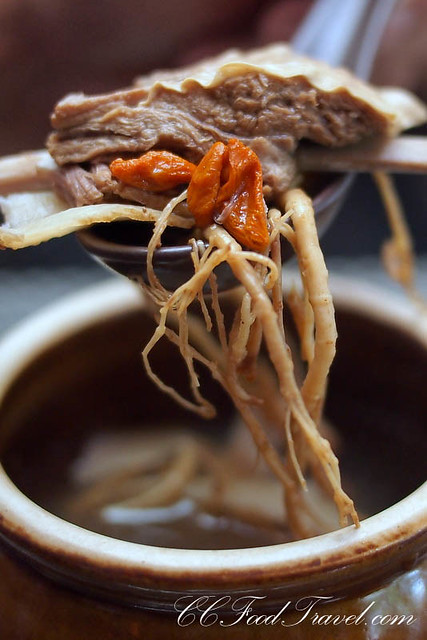 This herbal dish that’s warm and energy giving, is a great way to start off the meal. A soup that’s been slow boiled for 8 hours with Chinese Herbs such as the “yuk-chook” and “kam-chou” gives this soup a lovely flavour. The venison that’s been blanched in ginger and spring onion first has no trace of gaminess and is melt-off-the-bone tender.

Moving on to the stimulating Braised ginger duck with gingko nuts..

Here’s a way to add spark to your relationship, how about some hot and spicy ginger, as well as the stimulating ginkgo to rev up the heat in your relationship. Make sure the blood does not all flow to your head, with this incredibly arousing dish! 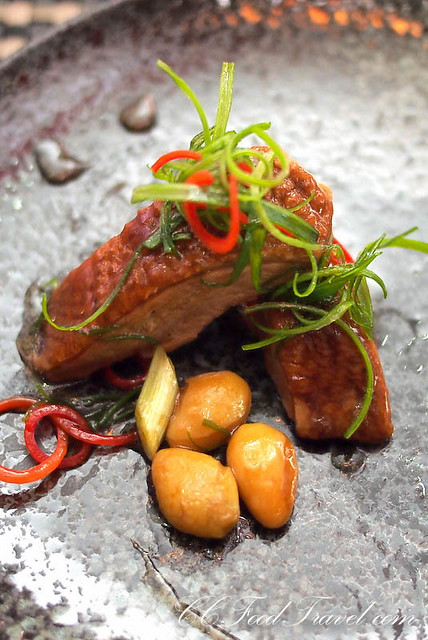 To retain the succulence of this dish, the duck is braised whole for 3 hours, so that all the ginkgo and ginger goodness is infused into the duck meat. The result is a deliciously moist and tender duck – even the breast meat is tender and juicy.

Next, injecting some heat with the Cantonese Style baked salted Chicken with Dong Guai.. 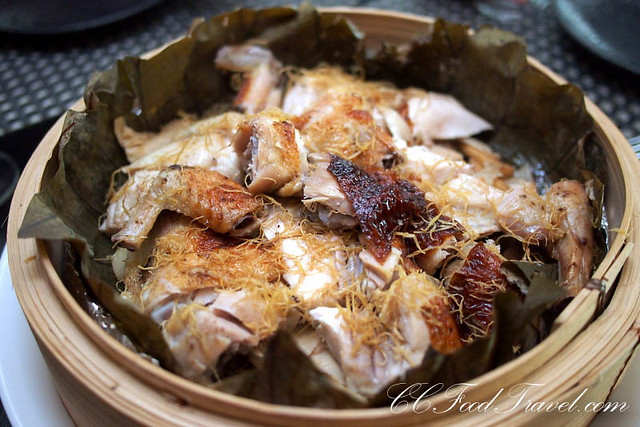 The Angelica Root, is no angel in the bedroom. It will enhance fertility and get you hot and sweaty for your partner! Are you man enough for the challenge..? 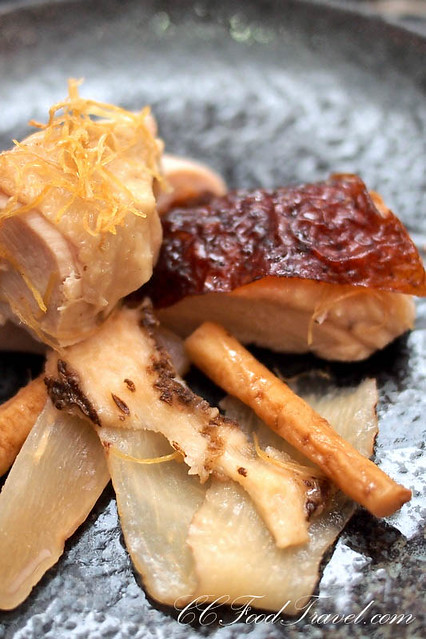 This whole chicken is butterflied, then seasoned with coarse salt and dong guai essence first. The essence is made by concentrating the Dong Guai juice and then rubbing it all over the chicken. The entire chicken is then wrapped in parchment and then baked for 10 minutes in rock salt. The aroma of the burnt rock salt is infused into the chicken via the parchment, and that’s what gives this dish its characteristic aroma. The parchment is then opened up, and the chicken is steam baked for a final few minutes to give it it’s nice roasted color. A superb dish, as all the herbs can be eaten and have a fabulous flavour as well.

Stirring things up with the Braised Nai Pak with crabmeat and Goji Berries..

Goji berries, also known as wolfberries, are so infamous for their stimulating properties, that fruit’s aphrodisiac status even found its way into an ancient Chinese proverb warning men who travel away from their families: “He who travels one thousand kilometers from home should not eat goji ”. Well, he who travels to Makan Kitchen SHOULD eat Gojiberries, and then go home and make babies! 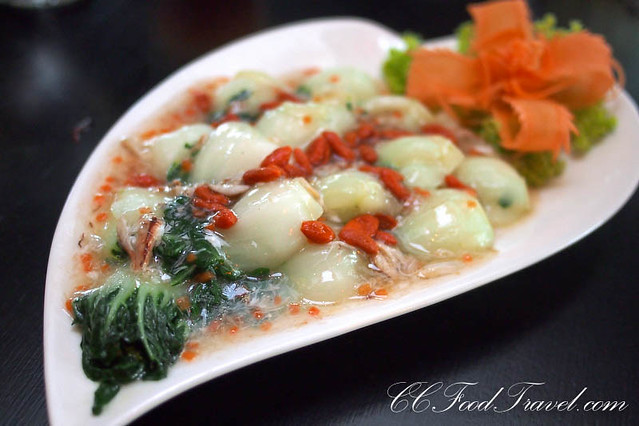 A lovely, refreshing crunchy dish of nai pak vegetables, with a sweetness that’s so intoxicatingly good from fresh crab meat and gojiberries.

Sweet endings with the sweetened honeydew broth with snow fungus and dried figs..

Used by Adam and Eve in the Garden of Eden, the fig paradoxically symbolizes both sexuality (the ripe fruit) and modesty (the fig leaf). Figs are known to increase sexual stamina, and some say the fig resembles the woman’s body.. one look at those curves and you’d definitely want to see a lot more! 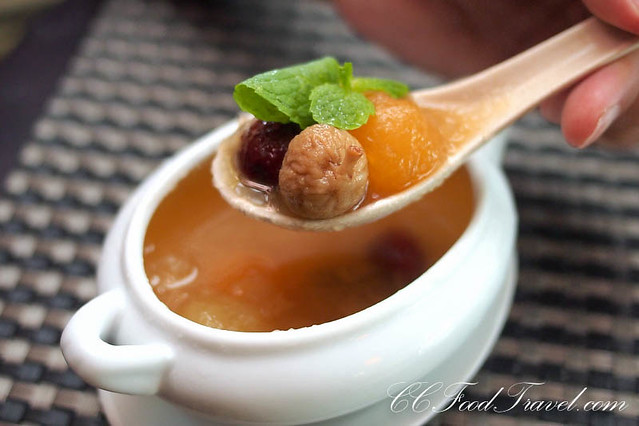 A dessert that really seduced us

Finally, no meal is complete without a sweet ending. Round honeydew spheres that had been boiled for a couple of hours, to release their juices and then chilled, so that the sweetness is absorbed back into its flesh was just the perfect end to this spectacular meal. Figs heightened the flavour, added texture and give it a romantic twist, for sure! 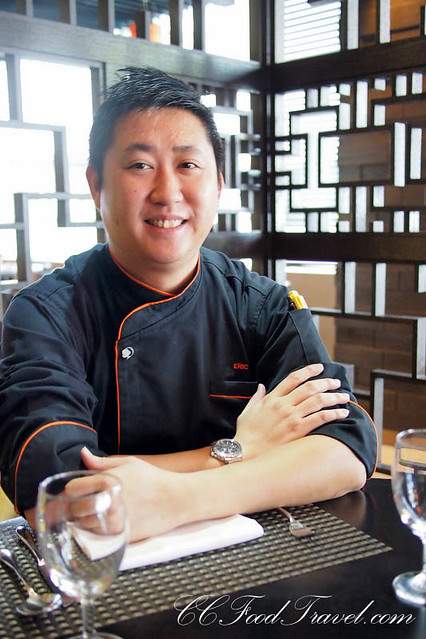 The friendly and approachable Executive Sous Chef, Eric Siew, who has been part of the DoubleTree by Hilton Kuala Lumpur kitchen team since its pre-opening days of 2010. In November 2013, Eric, and Pastry Chef, Kevin Yong, received a gold medal in the cold food category, and a bronze medal in the hot food category on at the Salon Culinaire Mondial 2013 competition in Basel, Switzerland. The Salon Culinaire Mondial, which is held once every six years, aims to measure the special skills and performance of culinary art teams and individual culinary art exhibitors. The competition represents culinary art at the highest level. This prestigious event is ranked as one of the three most important international team-cooking competitions, alongside the “Culinary Olympics” and the Culinary World Cup.

Makan Kitchen is 100% halal, and is child friendly too. For couples with kids, that’s a real plus point! Apart form the 1-day Aphrodisiac Menu (on the 14th Feb), from 17 January through 14 February 2014 there will be a daily buffet spread of great Chinese dishes prepared by Chinese Chef Cheong Boon Fei. Dinner guests can even wander into the other sections of Makan Kitchen to taste other local and international cusines, too. In addition to the Lunar New Year specialties served at the Weekend Fortune High Tea, the Longevity Dinner Buffets and the Gong Hei Fatt Choy Reunion Dinner Buffet, the restaurant also offers a Yee Sang buffet counter where diners can take their pick of the selection of auspicious condiments according to their preference.

For bigger dining groups, special Yee Sang options are available, including Rainbow Salmon Yee Sang priced at RM138++, Happiness Red Tuna Yee Sang at RM188++ and Prosperity Abalone Yee Sang at RM238++. Every order of Yee Sang serves 10 persons and is available for dine-in or takeaway. With a minimum spend of RM288 in one bill, guests immediately qualify for the daily raffle draw, and stand to win a free dinner buffet, a weekend high tea buffet or the highly-coveted tins of DoubleTree chocolate chip cookies!

Weekend Fortune High Tea
Priced at RM68++ per person. Available on Saturdays and Sundays, from January 17 until February 14, 2014
To welcome the auspicious Lunar New Year, Chinese Chef Cheong showcases a spread at the Chinese/Peranakan kitchen of Makan Kitchen with famous delicacies such as the Stir- fried Marmite Chicken with Sesame Seed, Stir-fried Kai Lan with “Mui Hong” Salted Fish, Roasted Duck in Egg Skin Roll with Sweet Dark Sauce, a range of Chinese sweets and many more.

Longevity Dinner Buffet
Priced at RM92++ per person on Sundays through Wednesdays and at RM98++ per person on Thursdays through Saturdays, from 17 January until 14 February 2014.
Showcases signature Chinese delicacies comprising Wok Fried Crab with Ginger and Soy King Sauce, Wok Fried Spicy Venison Rib, Sizzling Hot Plate choices prepared ala minute such as Slow Braised Ginger Duck with “Hoy Sum” and many more.

Confused with the assortment of Makan Kitchen menus available? Sail over to their website or contact them listed below to find out more.

Today, the 20th of June, at 3pm, Wong Wai Hoong breaks the old record of 38 hours to go down in the Malaysian Book…