I don’t know about you, but I do get excited when I get an envelope or invite that states, so-and-so.. you are invited to a Moet & Chandon Gourming Workshop.

Gourming is basically a French style update on late afternoon grazing – it comes from the words ‘gourmet’ and ‘tasting’. And we were invited to try our hand at discovering and creating dishes that paired well with two kinds of champagne, the Moet Imperial and the Moet Grand Vintage 2004. Now I don’t know about you, but this is the kind of gastronomic challenge I thrive on, an invitation to learn how to be a gourming expert. Translated into Moet-language, this is the opportunity to spend a couple of hours or so of hands-on, freestyle, creative experimenting with my choice of ingredient combinations, to from an enticing dish, that even the Chef would want to try. Of course we are not left completely to our own devices, and we were fortunate that we would have the skilled hand of Chef Nicolas Isnard to guide the way during this gourming session. 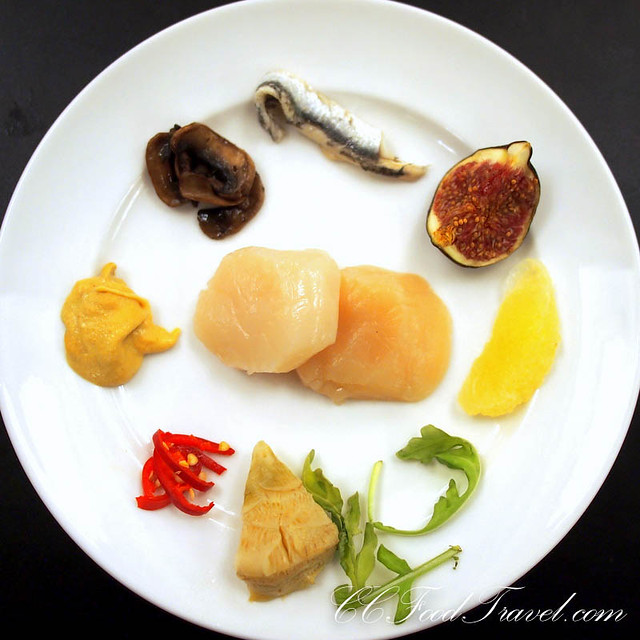 I would soon learn that although it is good to appreciate that champagnes are heightened by more tart, clean flourishes in dishes, the real art of food and champagne pairing, lies in finding new nuances and tweaks in flavours that brings out the characters in the dish. So it’s not just about matching, so much as enhancing. Saying something does not clash, is saying nothing at all, if you get what I mean. You really need to work a little harder to get the maximum complementing contrast out of your champagne-food pair. 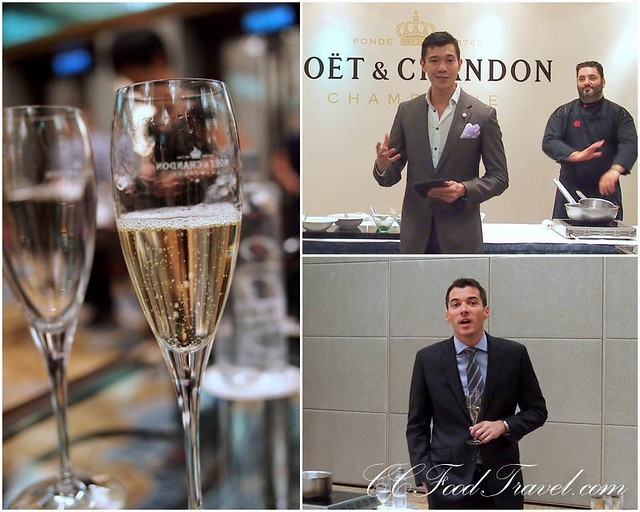 So, in true, classy Moet fashion, the doors were flung open, and we quickly found our spots behind the workstations. After Will Quah had made the fine introductions, and Arnaud Mirey, Moet Hennessy’s Asia-Pacific Regional Brand Ambassador had finished introducing the Vintages, Chef Nicolas Isnard took over the show. 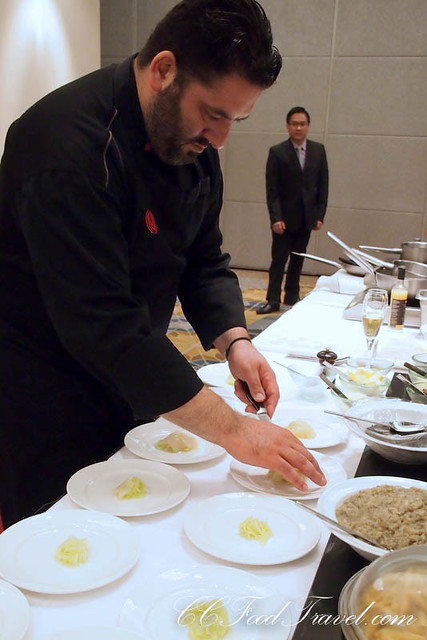 Chef Isnard started off with a simple scallop carpaccio, acidulated with yuzu vinegar and bedded on cucumber tagliatelle and then finished off nicely with a frothy coconut milkshake, releasing an unmistakable yet subdued umami hit. Of the two, this dish went better with the young and tart Moet Imperial, we all agreed. 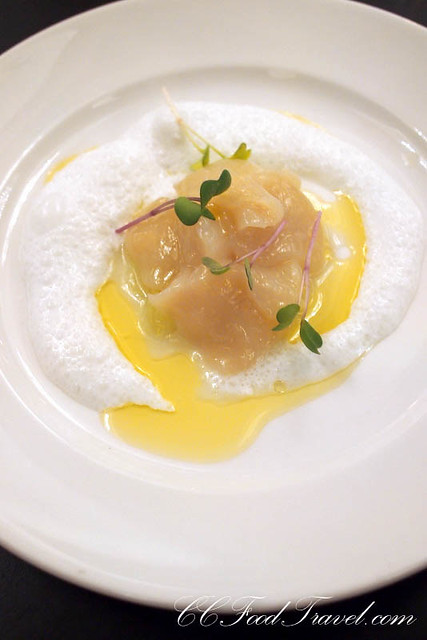 scallop carpaccio, acidulated with yuzu vinegar and bedded on cucumber tagliatelle and then finished off nicely with a frothy coconut milkshake.. 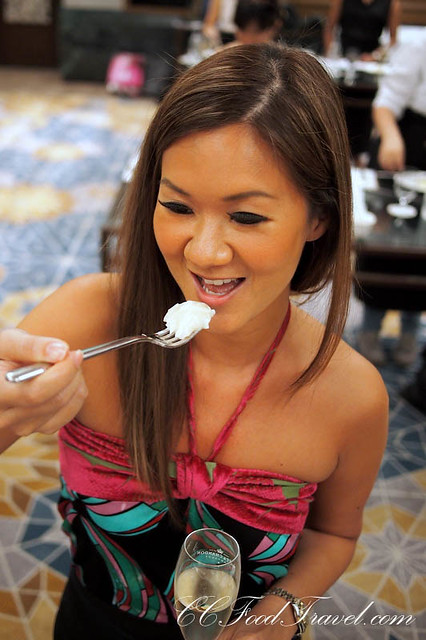 The next step was where things got a little more interesting. We all had aprons to wear, so we would not make a mess, I suspect. Using the same starting ingredient, ie. the scallop, we were told to find the perfect champagne match by tweaking it with a list of aromatics. For bitterness there was rocket leaves/grapefruit zest, for sweetness there was fig/coconut milk, for saltiness there was anchovies/sea salt, for sourness there was lemon juice/cucumber and there were also some more complex tasting items on the table such as mushrooms, mustard, cut chili and artichokes. 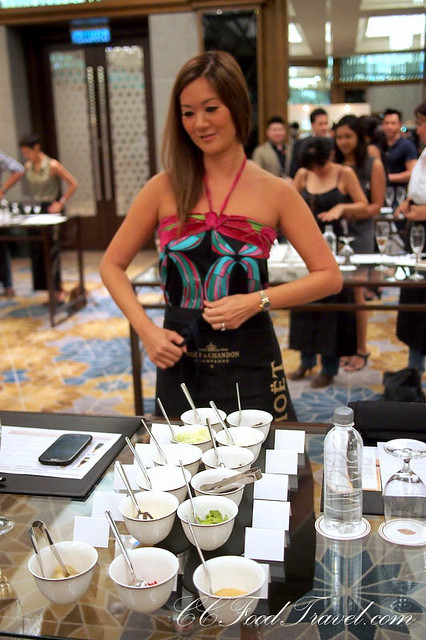 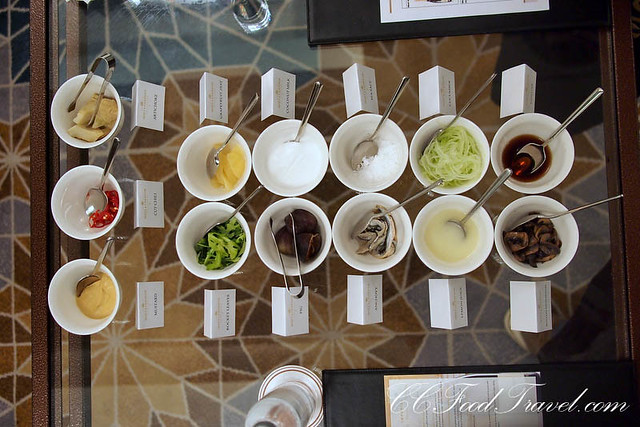 For me, on this first challenge, the items that best brought out the characteristics in the champagne and complemented the scallops were, the rocket leaves (bitter) and the lemon juice (acidic). They matched the initial features of the chef’s chosen ingredients so I guess it worked pretty well. 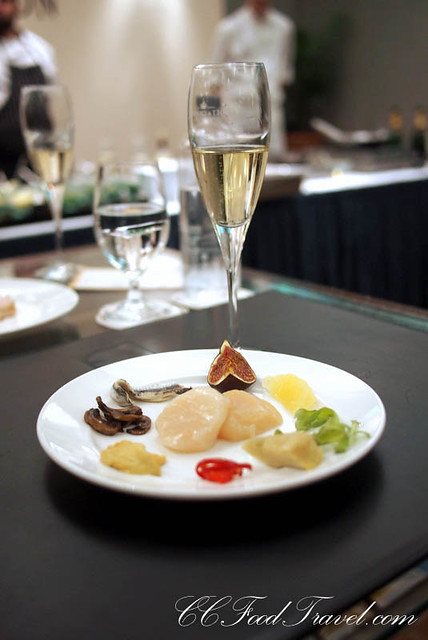 Then it was time for challenge No. 2 . The next item on the list was Chicken Fillet – Potato Gnocchi, Eggplant. I liked this with the Moet Grand Vintage 2004 best. 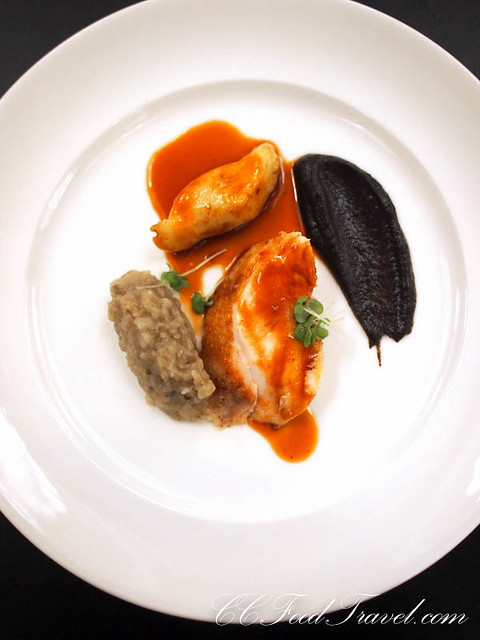 And for the non-champagnistas, what is a Grand Vintage, you might ask? In a nutshell the Grand Vintage Collection showcases the finest of the champagne house’s fine wines and each Grand Vintage is a celebration of a singular season. 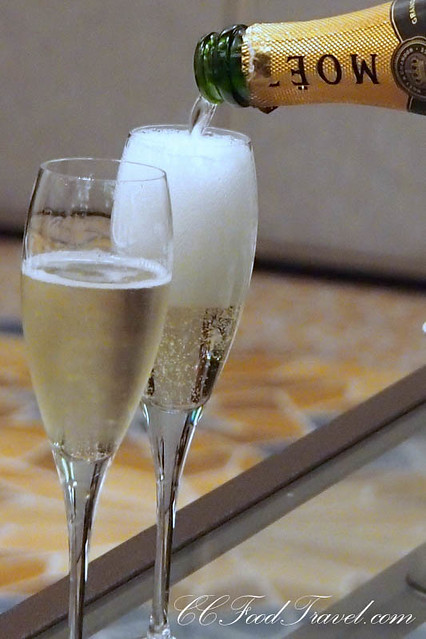 And the Champagnes, well they were an epiphany for me. Though a long time champagne lover I had not previously tasted the Moet & Chandon vintage. This champagne represents something extraordinary. Talk about bold, toasty flavours, both sweet and dry.. and I could taste almonds, and malt, mocha and light tobacco. While there is nothing wishy-washy about this vintage i.e. it is precise, it is also rather mellow and velvety on the tongue. Loved the creamy roundness of it all. It paired so well with the smoky eggplant and the chicken and potato gnocchi. After a while, I decided to drink everything with the Grand Vintage, and who can blame me! When the chicken came around and our gourming session started, I picked mushrooms(to match the eggplant) and some figs(to add a little bit of sweetness), to go with the chicken. 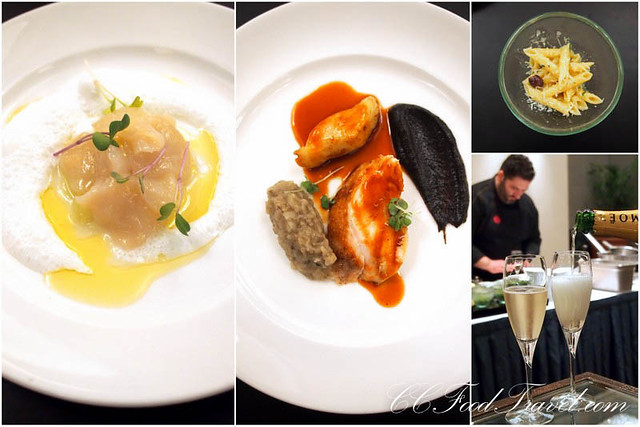 Finally, for out third and final gourming challenge, we were served Penne Pasta, with Olives, Basil, Parmesan. This again paired nicely with the Moet Grand Vintage 2004. For the gourming exercise, I selected lemon juice, rocket salad and artichokes to go with my pasta. Apparently artichokes might be a bit of a whammy, but it’s all a matter of preference really, so there is no wrong or right. The most important things is the champagne paints your dish in a new light which is pleasing to you, the diner. 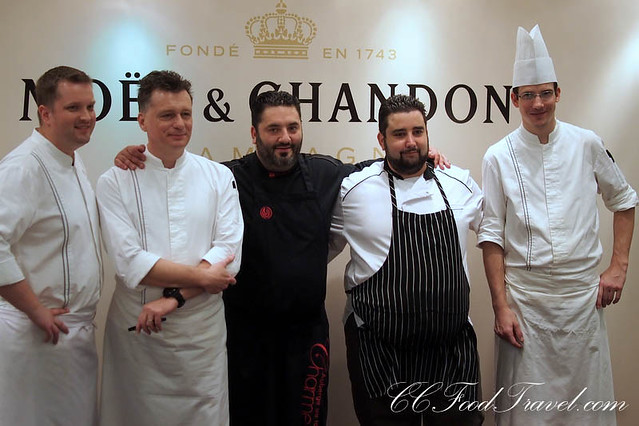 And you know, at the end of the day, you don’t really need to be, a champagnista or have such a finely developed palate as Arnaud Mirey’s – you can still appreciate that this bubbly tipple is absolutely delicious. And that, is the beauty of the Moet & Chandon Champagne. 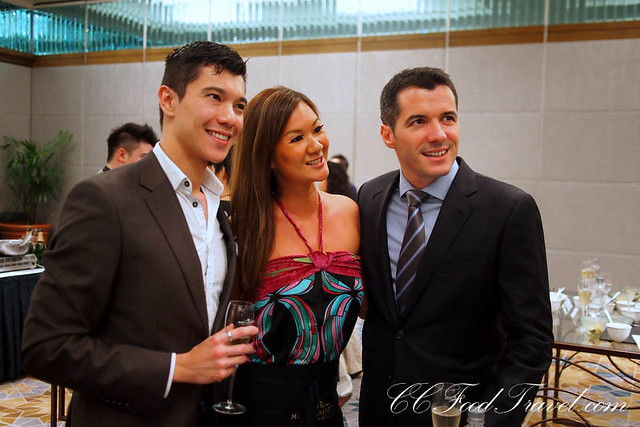 Arnaud Mirey is a French professional in wines and spirits graduated with honors from the Wine and spirit Educational Trust of London. He is the Regional Brand Ambassador of Moët Hennessy Asia Pacific, since 2008.

In Hong Kong, his roles included a position as Maitre D’ and Sommelier of Restaurant Pétrus Hong Kong, where he was responsible of the Five Star Diamond and 2 Michelin star Restaurant Pétrus and its wine list, which won the “Best Of” award of excellence for having one of the most outstanding wine list in the world, from the Wine Spectator magazine.

Nicolas Isnard was born in August 1977, the 18th, in the south of France, next to the Mediterranean Sea. His taste for cooking came from his grandmother.

Bored at school, he decided to live from his passion. He is the only one in his family to cook for work. His passion, energy and rigor allowed him to evolve, and work at the end of his apprenticeship, at 22, as a Chef de partie for a Relais & Château 1-starred Michelin restaurant: “Le Prieuré”.

At only 23, he became the second in command at  “Le Vieux Logis”, a 1* Michelin restaurant in France. A year later, he joined La Rotonde restaurant, in Lyon, a 2 Michelin-starred restaurant, with the team of Philippe Gauvreau. Nicolas is Chef de partie in a team of 25 people. He learns how to generalize luxury products, by creating for example, lobsters tagine.

He became Head chef of the Auberge du Vieux Puits restaurant at only 25. This restaurant is today a 3* Michelin-starred restaurant, headed by Gilles Goujon. That is where he met his actual business partner, David le Comte and also his wife Cécile. In June 2008, with Cécile Sagory, David le Comte and Jessica Jean, he bought the Auberge de la Charme à Prenois, a few kilometers from Dijon. Their cuisine: a mix between tradition and innovation. Within a year they got a Michelin star.

With David Le Comte, in 2010, Nicolas dedicates a book to the egg, with 30 original recipes with a simple title: L’œuf. From his experience, Nicolas’ has developed the signature of cooking l’œuf parfait. What product is more simple and symbolic than the egg?

Remember how, as a student, you would just cook some rice, and dump canned food over it? (OK, maybe many of you are like…