Ever since the weather turned cold and rainy (about as cold as it can be, living in the tropics and all), I’ve had puff pastry on the brain in buttery, flaky profusion. 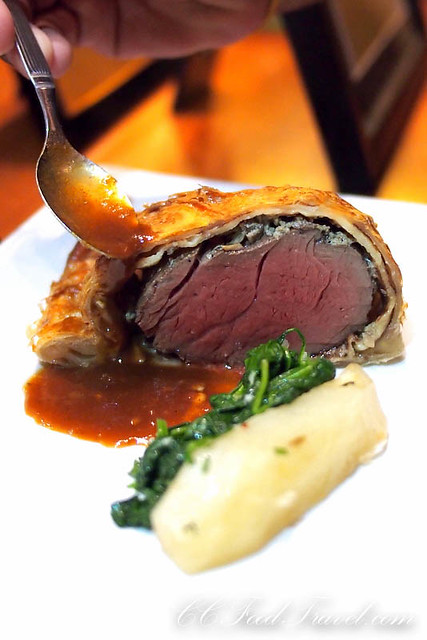 So, how fortunate was I then, that Prime had the same musings, that took shape in the form of a glorious Beef Wellington promotion. Wow, I could almost smell the puff pastry and feel the crumble on my lips. 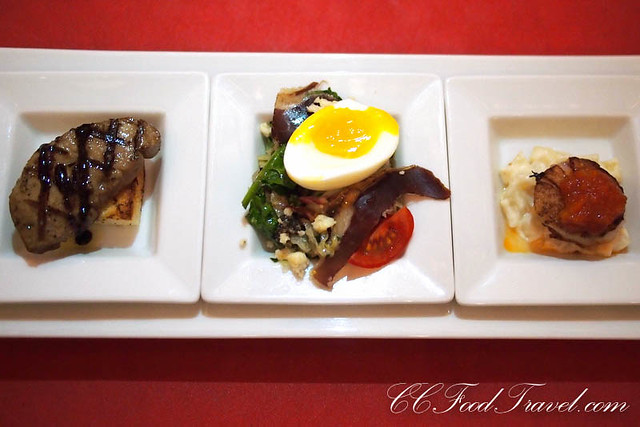 But first, there would be wine, and starters. A trio of magnificently presented entrée consisting of Seared Sea Scallop on Parmesan potato, Pan-seared Foie Gras On toasted brioche and a perfectly poached Egg on Prime composed salad.

A simple, yet inspired complement to a luxe pan-seared foie gras, to be sure, is toasted brioche. The brioche had a contrasting crunch and texture to the silken foie, and also acted as a spongy bed that absorbed all the juices of the goose liver. Nothing escaped it and everything was mopped up nicely to the last drop. No argument here, a winner. 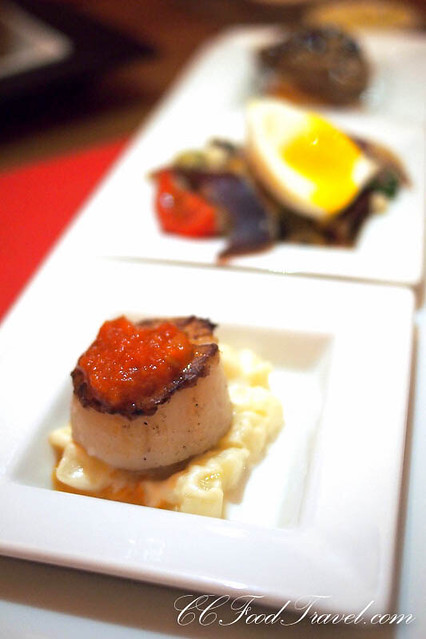 I was happy with the incredibly fresh, and lightly Seared Sea Scallop, which rested on a bed of killer addictive Parmesan potato. The poached egg that was runny and oozing yolk all over the composed salad was delicious too. We were definitely off to a good start. 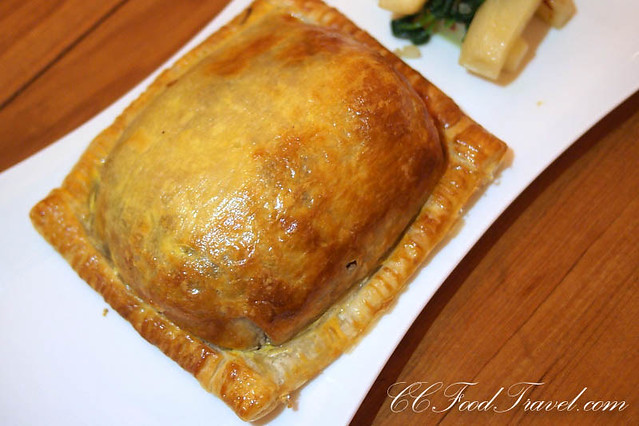 Sipping on wine and chatting to our hosts while waiting for the next course, my heart stopped when I saw the semi-spherical, glistening object come through the door.

OMG. When the Beef Wellington appeared, bake up and burnished and shiny.. it was like as if a foodie’s wet dream had taken form and appeared on the table.

Yes indeed, the Beef Wellington at Prime, emerged all flaky and golden as my buttery fantasies, and just in time to pacify my grumbling belly as well. All the cold left my bones as I cut into the hot, crumbly pastry to reveal, a medium rare piece of perfectly cooked, grain fed, Black Angus steak. 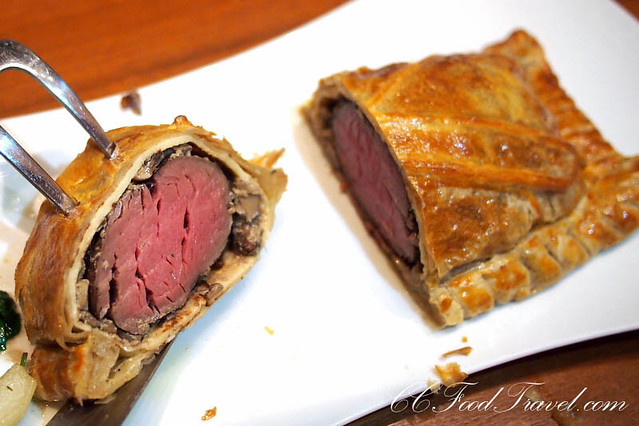 Apparently, (and Chef Antoine gave his secret away, when he told us this) the steak in his Beef Wellington is always nice and juicy because, it is cooked sous vide before hand at 56.5°C for 90 minutes, which gives you an irresistibly rosy medium rare hunk of meat. Once the Angus is done and ready, it is brushed with mustard, coated with foie gras pate, smothered in mushroom duxelles, wrapped in the puff pastry, then baked for a mere 10 minutes. That way, the juices are retained in the beef and the pastry comes out an insanely crispy golden brown. No leaky meat, no soggy pasty. Just buttery, flaky perfection. 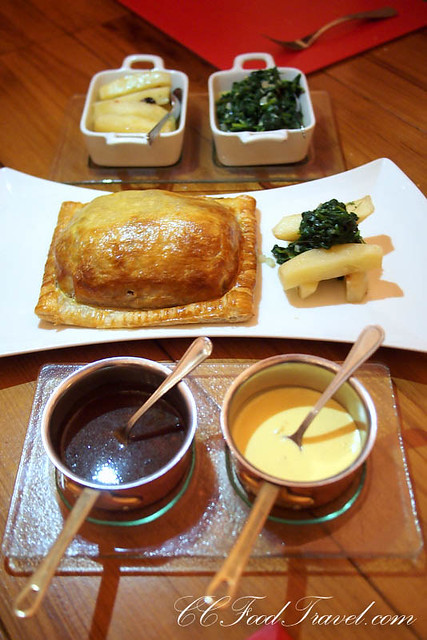 Served with a beef jus reduction that had been generously flavored with Truffle, this was the bomb. There was also some sort of Béarnaise Sauce as an option but I only had eyes of the Truffle infused beef jus, and can you blame me? It was mad. Too decadent for words. Now soaking the puff pastry in the beef jus was a different matter altogether. This sort of soaked pasty I do like.

Served with Butter Poached and Roasted Idaho Potatoes as well as Fresh Wilted Spinach, the portion was huge. Even after working out, and working up and appetite, this was one solid cow, I tell you. Shared between two, definitely value for money. 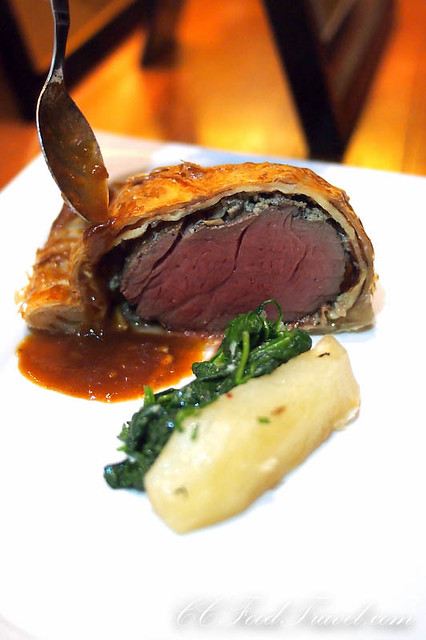 This glorious beef Wellington promo (info at end of post), will be on for the month of September, and available for dinner at Prime, LeMeridienKL. So if puff pastry and Black Angus Steak if your thing, head on down to Prime, and tell them you want a piece of the action.. oh, and tell them you read it on CCFoodTravel;) 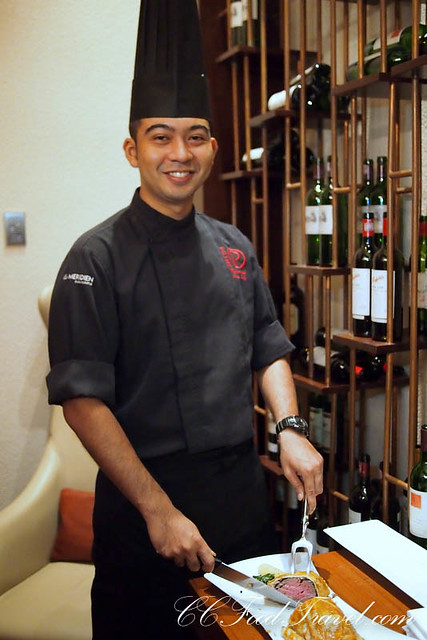 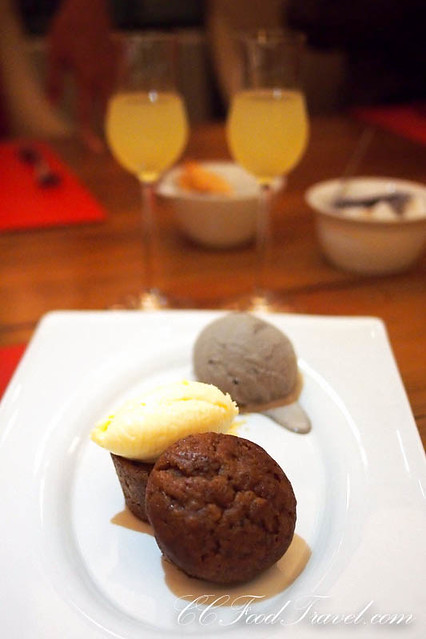 We’d heard a lot recently, about Hacha Mecha, a contemporary Japanese gastrobar located at the current and most happening strip in TREC, KL. Of…