Kota Kinabalu is the modern and fast expanding capital city of Sabah, one of thirteen states of Malaysia, located on the northwestern section of Borneo Island. Sabah is fondly referred to as the land below the wind, because of its relative distance from the damaging typhoon belt. The weather, however, can still make abrupt changes throughout the day. 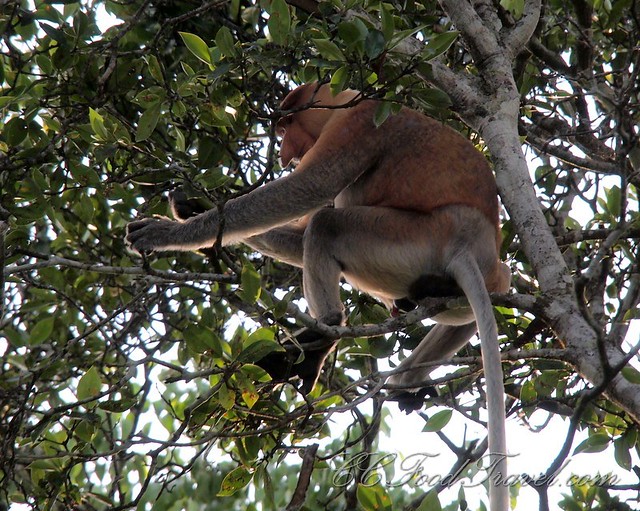 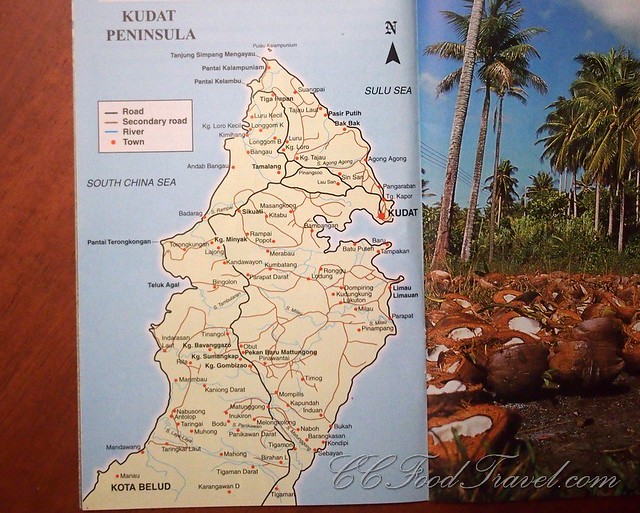 On this trip we explored a new underwater adventure less than 30 minutes off Kota Kinabalu shores, and ventured up north towards Kudat district to experience native arts, and a music festival. Kudat is a district located on the Northwestern section of Sabah. It had been Sabah’s first capital in 1882 when British North Borneo Chartered Company signed a land lease from the Sulu Sultanate.

Here are 10 places to go for your travel escape when you fly into Kota Kinabalu.

1. Visit the Tip of Borneo in Kudat

On the northwestern end of Borneo or the Tip of Borneo lies Tanjung Simpang Mengayau or “lingering/loitering junction”. Travel brochures mention this is where the South China Sea waves meet with the eastern Sulu Sea waves. Standing on the sea edge, that is, if one dares to venture out of the safe promontory and on to the slippery algae rocks, some with razor sharp mussels shells, and do not mind being sprayed by the salty sea water when thunderous waves collide with the rocks, you will feel the force of nature with strong winds beating on your face and body. 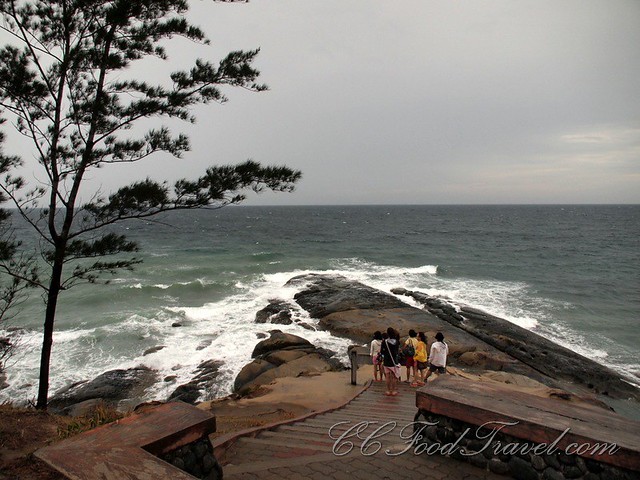 Looking out at sea, on a clear day, you can view the remote islands of Banggi and Balambangan. The sight is magnificent and the experience is a must when you visit Sabah. When the sun begins to disappear, a splendid array of blue, red, orange and gold colors overwhelms the sky – magnifying the magic of Tanjung Simpang Mengayau.

Tanjung Simpang Mengayau is located in the Kudat Peninsula, about three and a half hours drive from Kota Kinabalu City. The less frequented but astoundingly beautiful Kalampunian Beach greets you on the left and accompanies you as you reach the tip of Borneo. The rarely occupied beach is known to be one of Sabah’s most pristine.

With such relaxing beaches and breathtaking sunsets found here in Tanjung Simpang Mengayau, wouldn’t it be more grand if there was live orchestral music to accompany the thundering waves and disappearing light? Well, for several years now, the Sunset Music Festival has been holding a stage here with local and international music performers celebrating life, music and nature with a dramatic radiant Sabah sunset as a backdrop. If you have timed your visit sometime between June and July, you can play at the beach during the day, feast on some seafood, then enjoy an evening of lively entertainment before returning to one of the few resorts nearby to rest.

This year the Jesselton Philharmonic Orchestra opened the program with classical pieces while local Malaysian singers such as Atilia, Guba, Jadesisters, Marlleynney Fane Paul and Mohd Rifanzi Ruji, provided contemporary, original and traditional tunes to entertain a large turnout of local and international audience. To find out more, visit www.sunsetmusicfest.my.

3. Visit and stay at a Rungus Longhouse at Kampung Bavanggazo 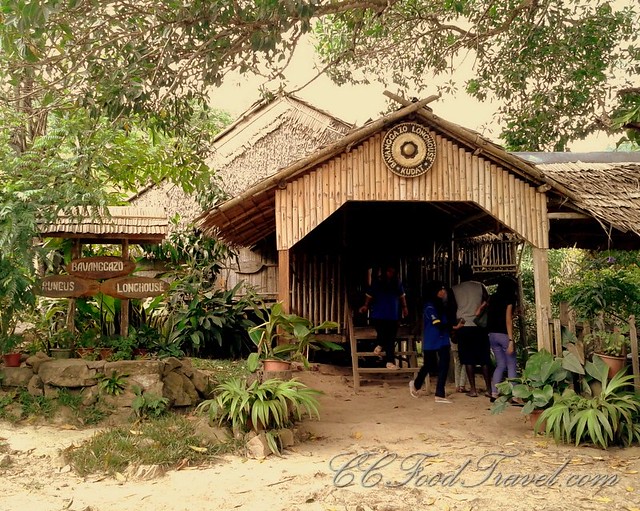 Kudat is home to the indigenous Rungus, the most traditional people of the state, and a sub-group of the Kadazandusun. The agrarian tribe is also famous for their gong-making, colorful beadwork, woven fabric and baskets hence you will see many of these handicrafts displayed at its attractions. Bavanggazo is one of the 3 villages located in close proximity to each other which we visited to experience the unique Rungus culture. 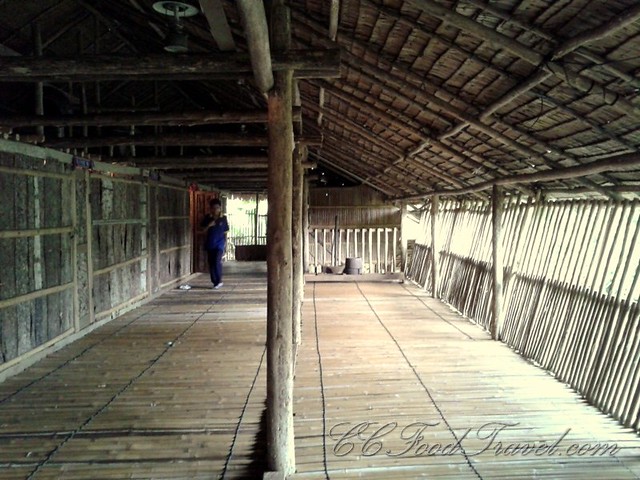 We walked into a traditional Rungus longhouse (vinatang) and experienced the fascinating communal lifestyle of the local community. The sturdy house with a low roof is perched between three to five feet above ground. It has a large communal hall outside the private rooms as a place for socializing and communal work. The entire structure is well-ventilated with floor platforms made of split bamboo and outward sloping walls – a distinct feature of the Rungus architecture. While it was hot outside, the interiors remained cool. 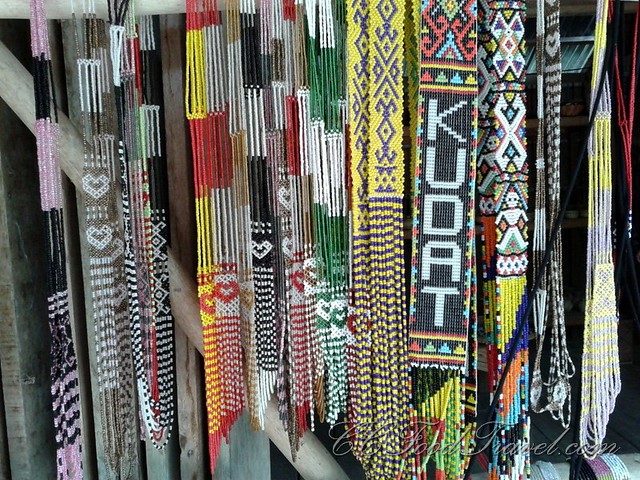 Known for intricate colorful beadwork and woven fabric, the Rungus women create a variety of trinklets and traditional clothing which you can conveniently pack away for yourself or serve as gifts to friends.

4. Take home a bottle of natural honey from Kampung Gombizau

Honey tastes different, depending on the place it is cultivated from. Here in Kampung Gombizau, a neighbour to Bavanggazo, the nectar sources from a variety of local flowers in the surrounding tropical jungle creates a unique honey taste. Bring home some natural sweetened goodness packed with nutrients to go with your toast or cereals. 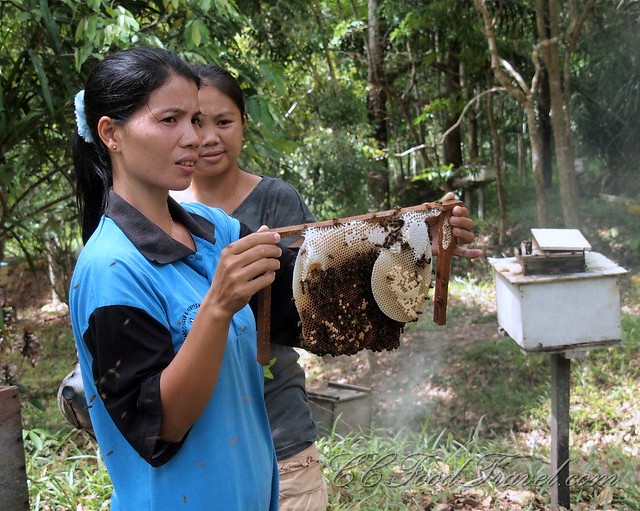 We were given a tour to the bee hives which was located less than 2 meters from a main village pathway, on top of a slop. I guess the villagers like to live dangerously. The fearless Rungus guide and Gombizau resident, smoked the hives without any protective gear. The smoke temporarily neutralises the bees in the hive in order for her to pull out a section to show us the honey combs then explained to us the honey harvesting process.

5. Bang some gongs at Kampung Sumangkap 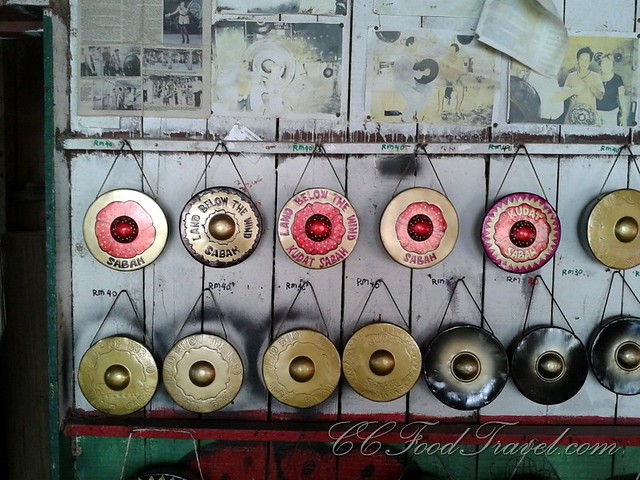 Whenever you see a gong, don’t you have an urge to whack it? We do. It might be due to that little bit of destructive nature in us to shake up the peace and mundane. We dropped by to the famous gong making center of Kampung Sumangkap, also in vicinity of the two villages mentioned above, to learn about this noisy cottage industry. 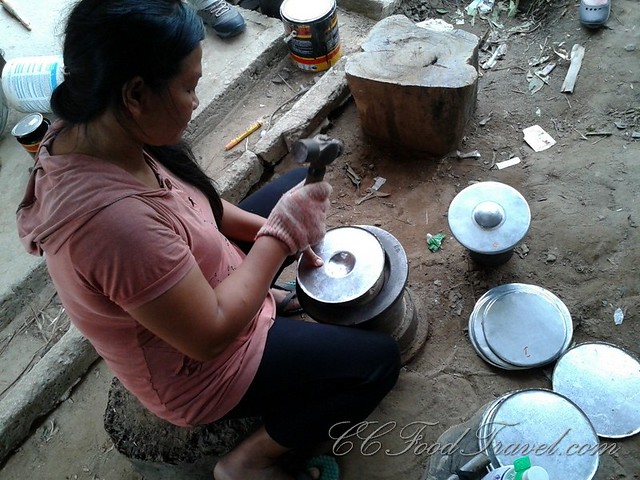 Residents here are heard clanking away throughout the day, beating alloy metal and coloring them to make gongs of various sizes and tones for local and international customers. The work is labour intensive. Every gong and holder is handmade. We observed how raw materials are transformed into this significant instrument that has been the most commonly used idiophone played in Sabah. The gong is valued as a musical instrument, ceremonial artifact, and an item of wealth.

Normally one would think that cultural villages are a tacky tourist destination but our experience at the Mari Mari Cultural Village certainly changed our perception. It was a highly educational experience as you get to walk into various traditional homes of Sabahan ethnic communities- the Bajau, Lundayeh, Murut, Rungus and Dusun – and become acquainted with their designs, traditional dances and rituals. Having been to a few real ‘lived-in’ longhouses, we can say that visiting the ones in the cultural village is a more comfortable experience. 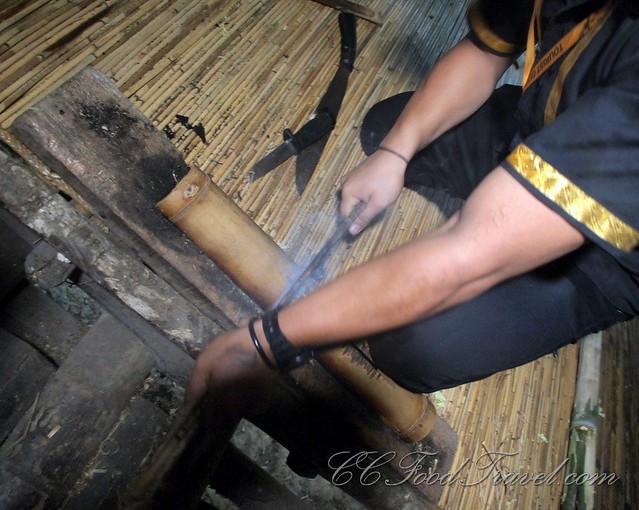 Visitors will also get a chance to learn, amongst other things, a traditional fire-making method, try out real blow pipes, and taste rice wine, local honey, and traditional snacks. 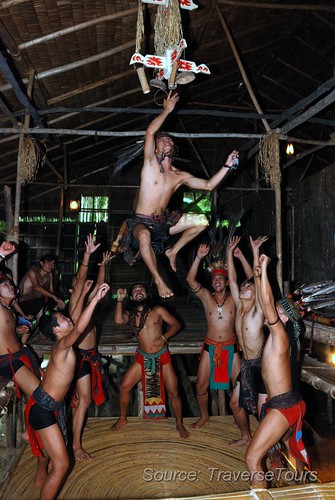 One of highlights of the village for us was the trampoline game or ‘Lansaran’ (wood and bamboo trampoline) played by the fierce Muruts in their longhouse. Team effort is required to build up a strong rhythm on the trampoline allowing a jumper to leap high up in the air to grab a flag from a target on the ceiling. This height can reach above 12 feet!

Mari Mari Cultural Village is built in a remote forest setting in Kionsom, Inanam, about 30 minutes drive from Kota Kinabalu.

7. Go topsy turvy when you visit the Rumah Terbalik in Tamparuli

Literally translated as ‘Upside Down House’, Rumah Terbalik is the first of its kind in South East Asia and among the five upside-down structures in the world. There are three in Europe and another in Japan. Completed in February 2012, this relatively new attraction has been listed as an architectural wonder in the Malaysia Book of Records. 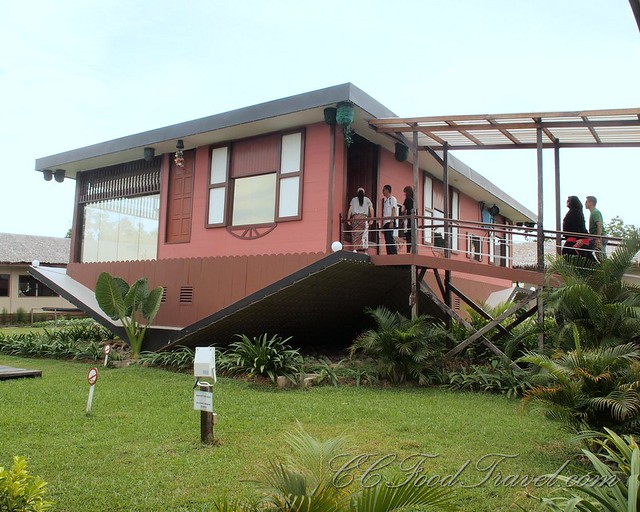 Guided tours will introduce visitors to distinguishing décor and features found in a Malay house circa 1980s. Everything inside the house, from furniture to household appliances including geckos, hover above your head. There is even an upside down car parked outside! 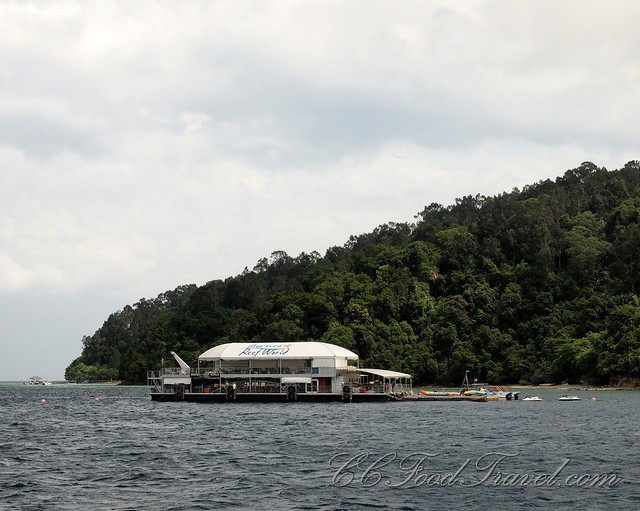 Don’t like scuba diving but want to see the ocean world? Try out sea walking, a very unique and fun experience to see the reef up close with an oxygenated helmet. Walk among spectacular reef fish on our spacious underwater platform. Suitable for non-swimmers and persons aged over 12 years. 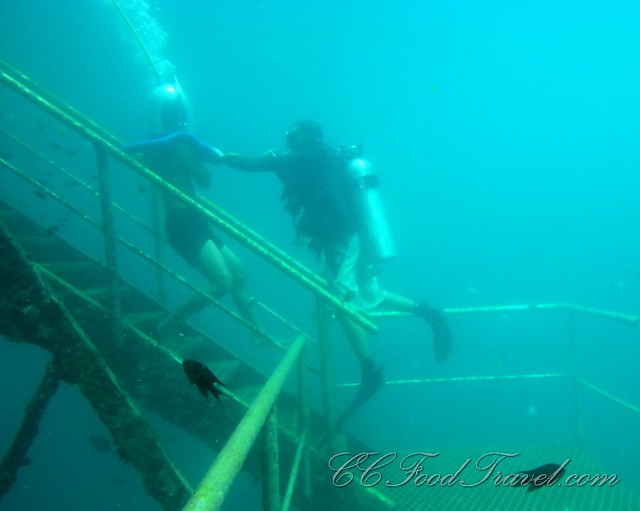 After a briefing on safety, and safety hand signals, an experienced scuba dive master ushered us into the sea. The helmet weighs 30kgs on land and you are given assistance until you are fully submerged in water, reducing the helmet weight significantly.

You can get to Borneo Reef World Pontoon at the Jesselton Harbour Jetty. Check out www.borneoreefworld.com.my.

9. Ride a train into the interiors and hit the whitewater rapids on Padas River 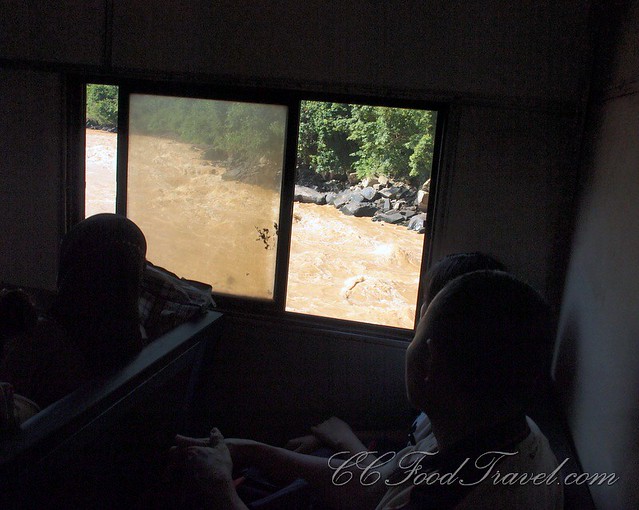 Needing a little more excitement, we joined the Padas River whitewater rafting program. Our destination was Pangi, a village in the Sabah interiors which could only be reached by rail. 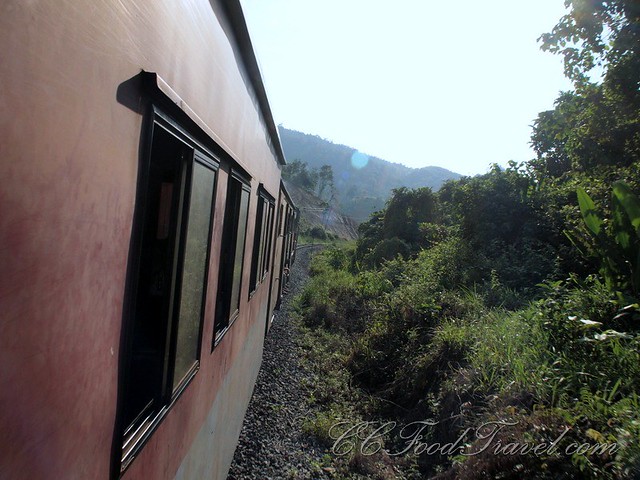 Our journey began before sunrise in a van to Beaufort town where we caught an old rickety diesel train, the only transport into the interiors apart from walking. Our train ride stopped at several villages stations, and eventually followed the Padas River with a backdrop of green mountains and hills. We sat in iron carriages together with villagers. In between our views of wild Sabah and the metal rattling, we struck up conversations with the Sabahans. 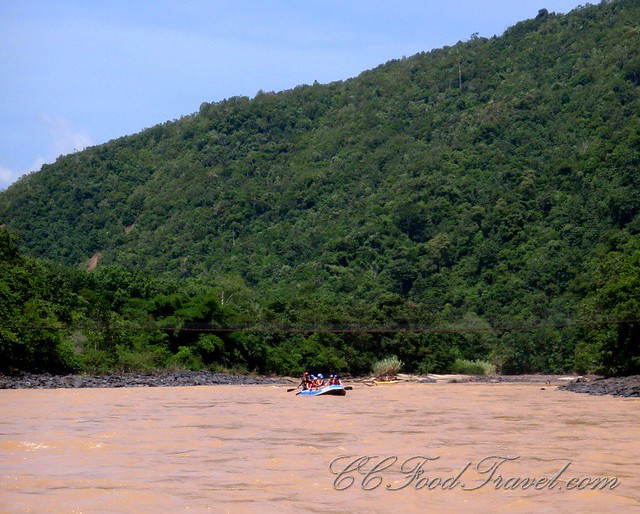 Padas whitewater rafting is a full day program. It is available year round but the wildest rapids are found between November to March.

10. Spot some Proboscis Monkeys at Garama River then watch the fireflies in the evening 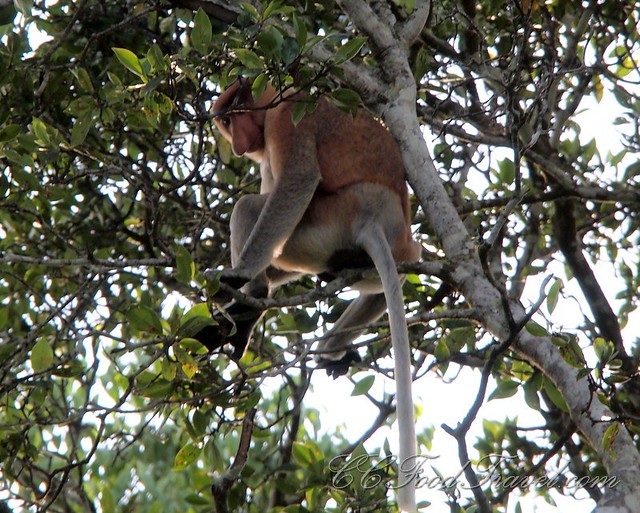 Garama River is one of the rivers visited for wildlife sightings. You can see the indigenous Proboscis Monkeys amongst other wildlife such as long tail macaques, monitor lizards and crocodiles. It was a 2 hour journey heading out here to spot Sabah’s longnose primate and it didn’t take too long before saw groups of them along different sections of the river. After dinner, we headed out in the dark for a mangrove fireflies experience on the same river. We were told that the unsynchronised blinking lights would tell that there are several species of fireflies on the same tree. The mangrove firefly species are also different from the ones found on land. 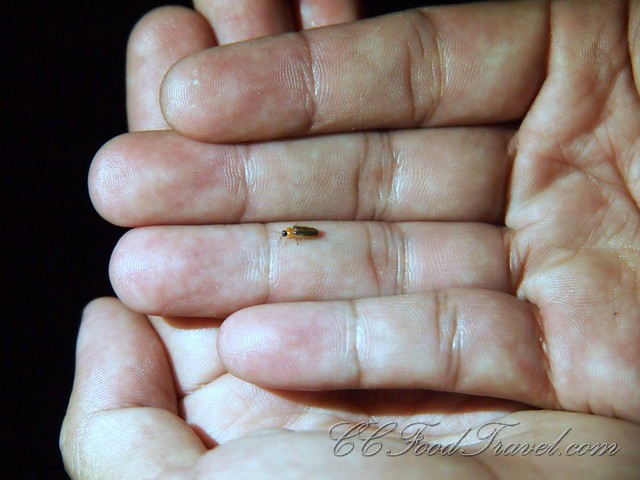 You might be wondering how long you should take and plan for, during a short vacation in Kota Kinabalu. With destinations listed above, you could be looking at a minimum of 6 days stay, and that’s with very little beach R & R. Roads outside Kota Kinabalu have single lanes, creating congestion that is made worse with peak hour traffic. Definitely plan for big delays when traveling here.

This trip had been sponsored by AirAsia together with Sabah Tourism Board. However, CCFoodTravel.com maintains full editorial control of the content published on this blog. We extended our holiday, on our own, to cover more locations, that you read about in this post.

The specialty at After Ate, a popular, ingeniously realized niche restaurant is dessert and dessert only. At After Ate, most of the action takes…