In the past five years or so, KL is starting to emerge as one of South East Asia’s exciting culinary meccas with a respectable showing of restaurants with some rather accomplished Chefs, helming the kitchens. Although the city has long offered good inexpensive street food, and a modest selection of trendier restaurants, upscale menus have tended toward French or Italian influenced cuisine prepared by classically trained chefs.

But the culinary horizon is broadening as more chefs from Australia have imported their refreshingly open-minded philosophy of using local ingredients and interweaving elements of East and West to create their own unique style of cooking.. but please don’t call it fusion. Australian chefs have been drifting over to Kuala Lumpur and these chefs have brought a tantalizing diversity to the KL food scene. 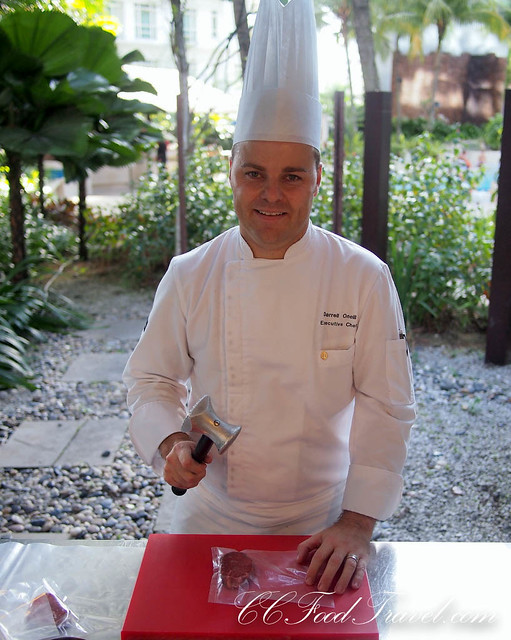 Meet Chef Darrell J. O’Neill, the new Executive Chef InterContinental Kuala Lumpur. From a young age he dreamt of becoming a chef so he could travel the world, meet new people and create memories. He cooked his first dish at the mere age of 10 as he would help his mother bake and prepare meals at home. His passion lies in cooking dishes that are true to themselves and highlight the fundamentals and freshness. With a love for the simplicity of Japanese food, and the complexity and flavours in Chinese Cuisine Chef Darrell brings his vast culinary expertise to InterContinental Kuala Lumpur. 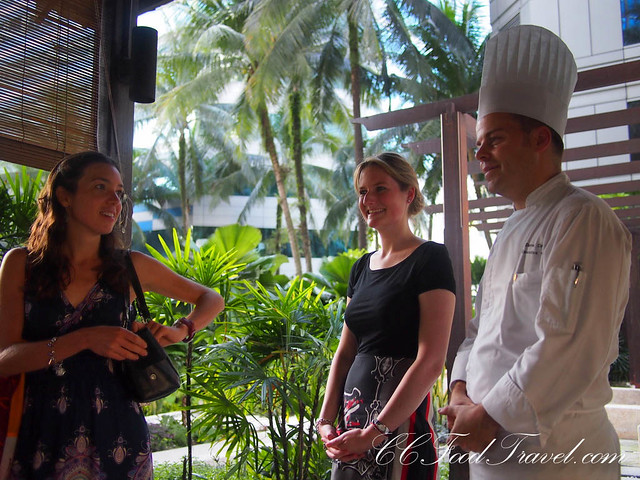 cocktails and getting to know the guests.. Zoe Chaplin from Marketing Communications introduces Chef Darrell

Growing up in Australia, in such a multi-cultural country Chef Darrell knew he enjoyed mixing diverse flavours to create fusion dishes. He is not defined by any type of cuisine; he is driven by using only the freshest and highest quality ingredients. Chef Darrell discovered his culinary identity as a teenager and started his career working at the local bakery before going to school. Once he has completed high school, the owner saw that he was passionate about the culinary field so offered him a fulltime job at a seafood restaurant in Australia. After learning the basics at this restaurant Chef Darrell began to travel abroad so he could learn more about different types of cuisine and enhance his skills. 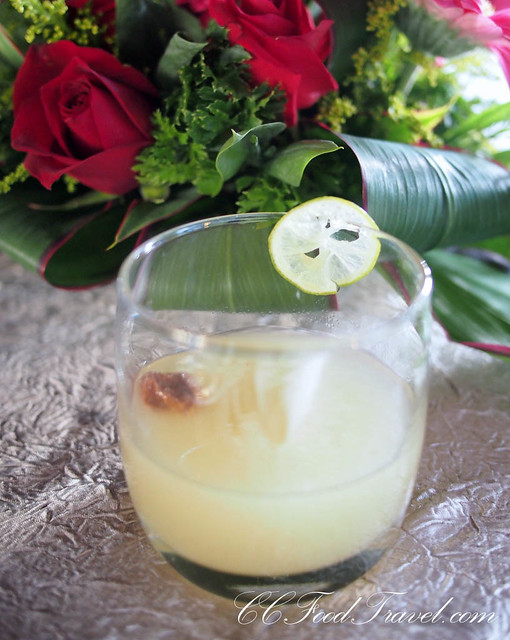 a rather interesting sake base cocktail called the Tropical Masumi – masumi sake, pineapple juice and lime

He worked in UK and France for 2 years before returning to Sydney for 3 years. In 2003 he moved to Hong Kong to work in InterContinental Grand Stanford Hotel. Then in 2005 he moved to Dubai and worked at the Burj Al Arab, a 7 Star Boutique Hotel where he utilised his creativity and modern approach to food preparation and presentation techniques. Chef Darrell then worked at Atlantis the Palm Jumeirah where he was responsible for overseeing four Michelin Starred Restaurants. Ronda Locatelli the 1 Michelin Star Italian Restaurant, Rostang the 2 Michelin Star French Brassiere, Ossiano the 3 Michelin Star Catalan inspired Restaurant and Nobu the 1 Michelin Star Japanese Restaurant. Whilst working in Dubai he worked under Chef Nobu Matsuhisa who has played a pivotal role in Chef Darrell’s development. 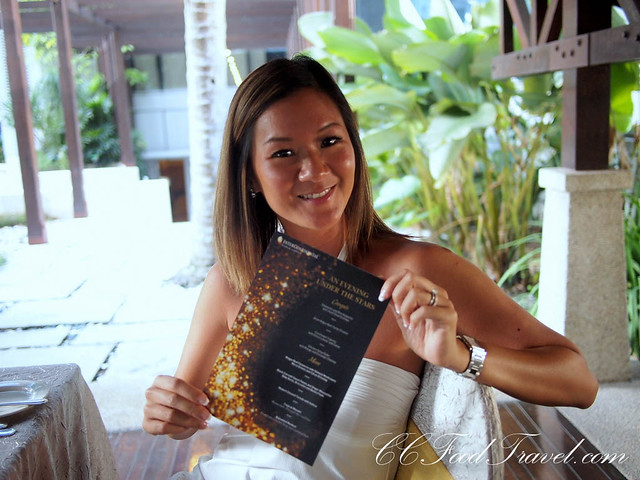 So, as luck would have it, we were invited to dine under the stars, by the pool side at the InterContinental, with Chef Darrell doing all the cooking for us. Loads of live demonstrations and on the spot preparations of our canapes, mains and also desserts, made this dinner exciting and really rather memorable. 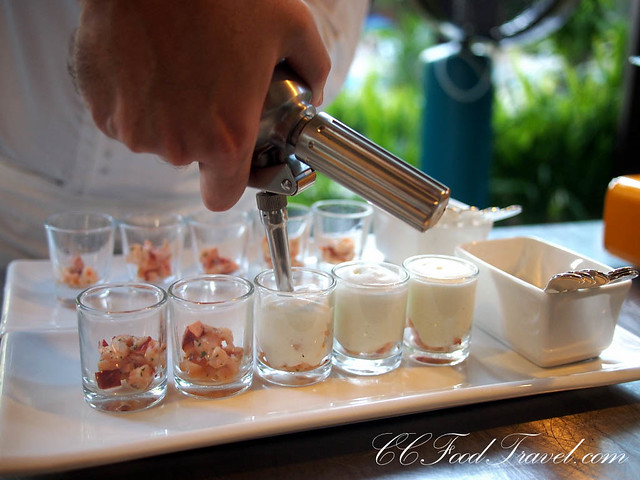 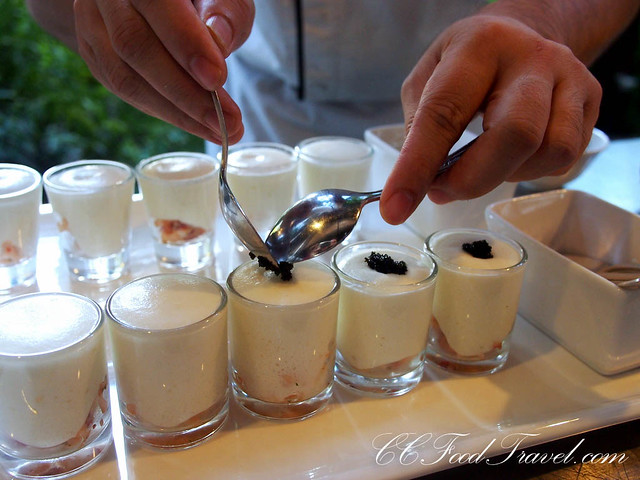 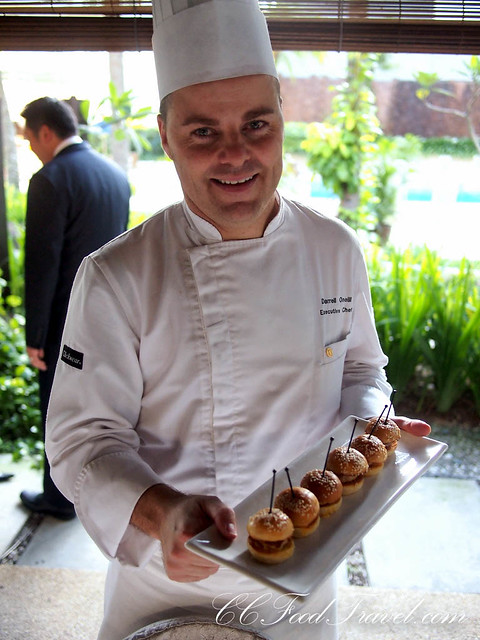 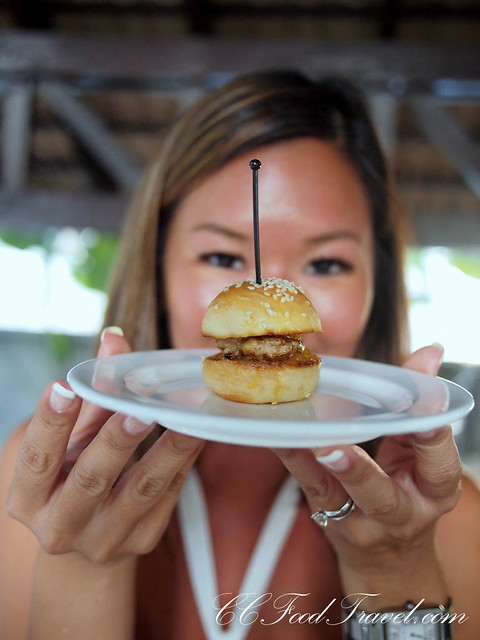 almost too cute to eat! 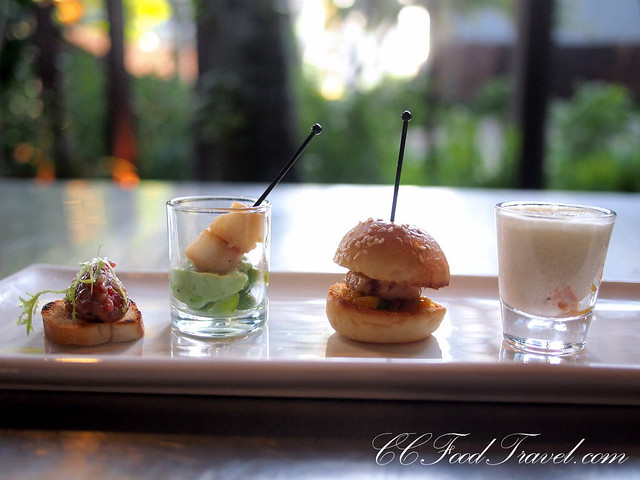 The canapes we had that evening L-R: Asian Angus Beef Tartar Crostini, Edamame and Mint Gazpacho with Hand Dived Scallops, chicken satay slider with mango and coriander chutney and cauliflower espuma with citrus lobster and caviar

Of these, I loved the Asian Angus Beef Tartar Crostini best, for its terrific texture and flavour. The beef was sweet, delicate in texture and has some lovely herbs in it. It was like eating mini explosions of rare, succulent steak. Out of this world! I also loved the cauliflower espuma with citrus lobster and caviar because of the freshness the lobster and the creamy yet light texture of the cauliflower espuma.. and who can resist caviar that completes the ensemble, and sits as the crowning glory! 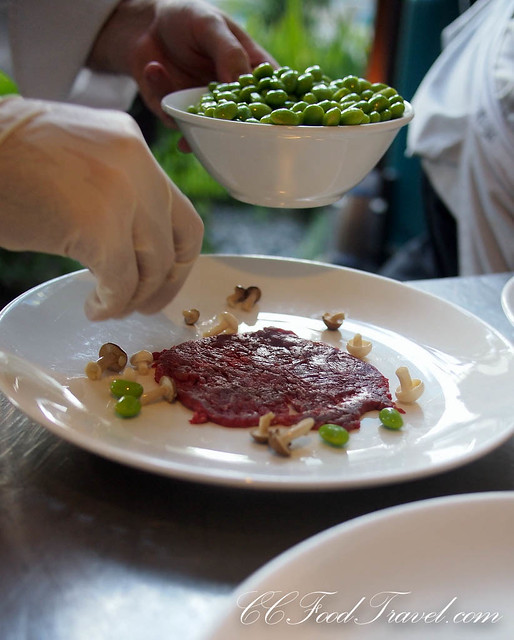 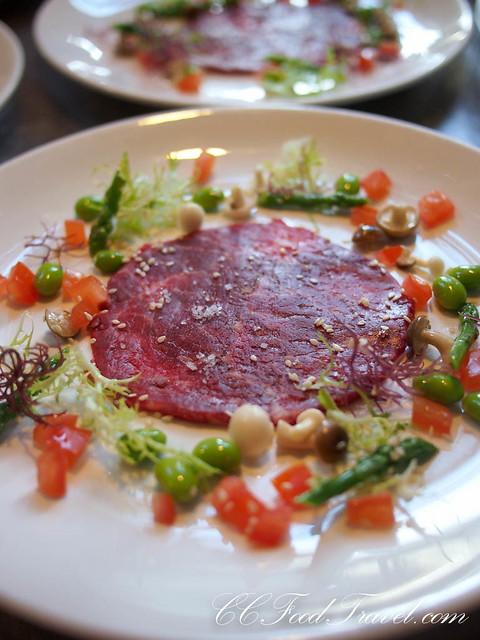 The Wagyu Beef Carpaccio, thinly sliced pieces of prime cut wagyu beef that the Chef had been hammering, the “be-juices” out of, just seconds earlier, to give that flattened effect, was exquisitely chilled, perfectly garnished and extremely flavorful. No complaints here. 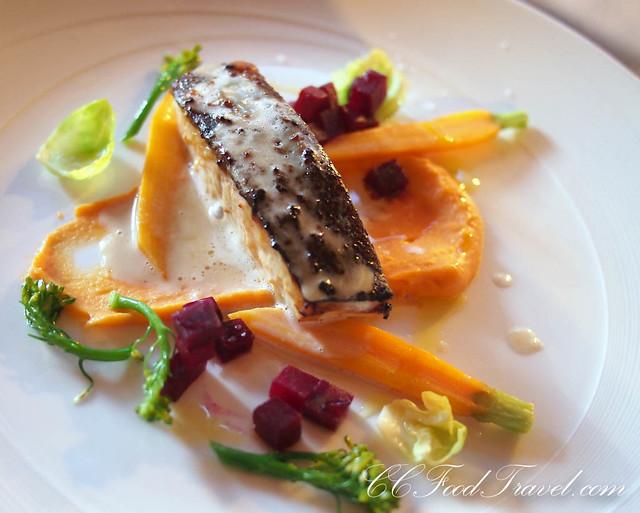 Another great mains but I was really too full from the earlier dish and the canapes to fully appreciate this dish, which was a shame! 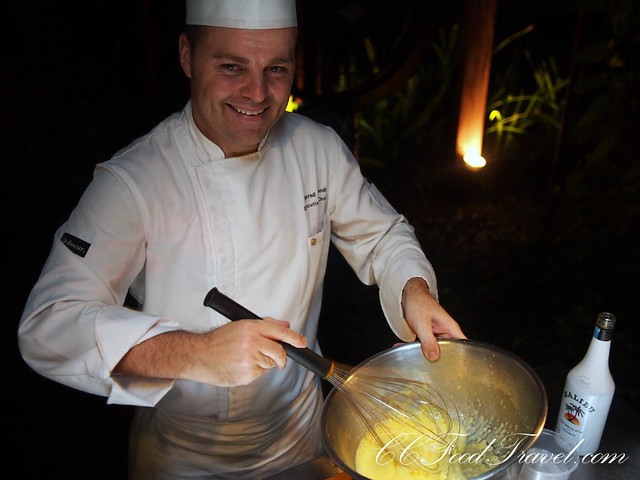 Ah, and the final highlight of the night – watching Chef Darrell preparing the Modern Coconut Tartufo with Kahlua. He had to work extra fast, as he was preparing this dessert outdoors, and the ice-cream was melting in the heat. 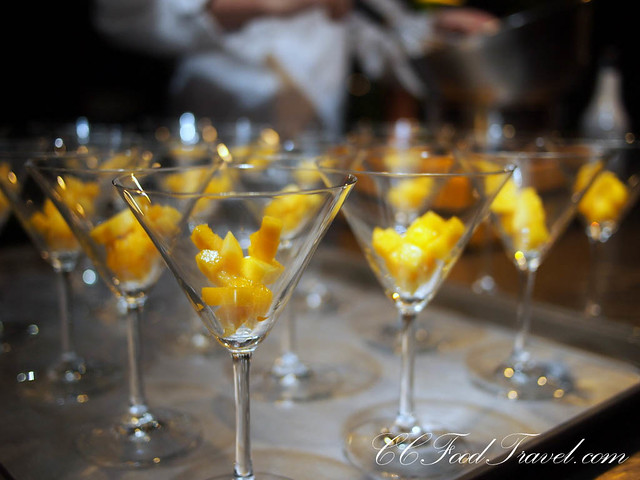 Though he was serving many more that night, this recipe that Chef Darrell share with us, serves 4 persons. 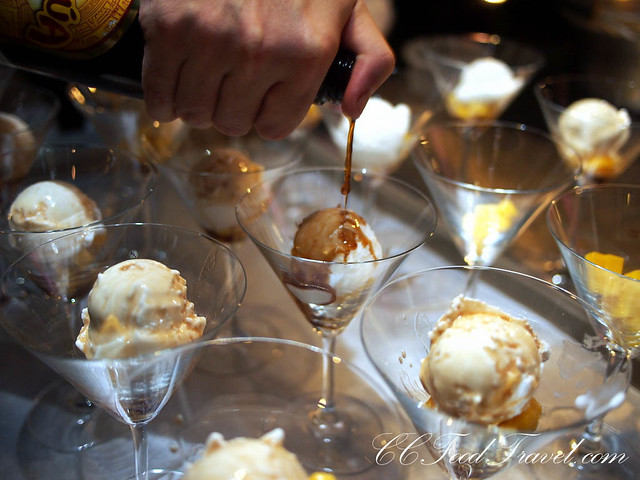 Combine the water with the grated Coconut and squeeze out the milk through a strainer into another bowl then add the fresh milk and half of the sugar and bring to the boil until 80 degrees. Add the other half of the sugar to the Ice Cream Stabilizer and add to the heated Coconut milk and stir until dissolved, place bowl into ice to cool down and then add to ice cream machine to churn. 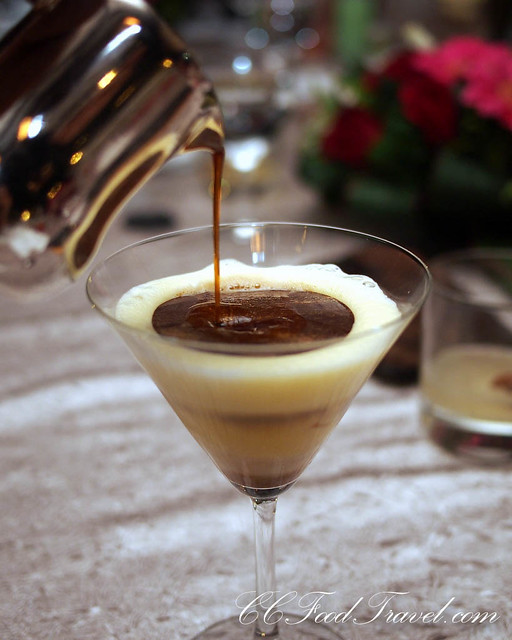 Place a sauce pan with warm water on a burner/induction and add your egg yolks to a clean mixing bowl and then place onto the sauce pan and use as a hot bath, add the water and start to whisk your egg yolks and after 1 minute add your Malibu and keep whisking until your sabayon becomes light and airy so you will be able to make your figure of 8 with your whisk. Serve with ice-cream and expresso coffee. The resulting dessert that’s both hot and cold is really a treat for the senses!

Well, after tonight, all we can say is that we will definitely be coming back for more of Chef Darrell’s excellent cooking. He’s a mighty fine chef, and we look forward to dining in his restaurant, ala carte style, real soon!

Adventure Rob was in town on a really tight schedule, en route London. The SMS read – I’m free for dinner, what’s the plan?…