Sometimes, Chinese New Year can be a bore.

Stuck in Kuala Lumpur, with no place to go. Nevermind the eerily quiet streets and the annoyingly packed shopping malls.. all the best Chinese hawker centers are closed as well. So it was with great glee when we noticed that this particular hawker shop was open on Jalan Kuchai Lama. Driving past with Cumi on the Chinese New Year long weekend, we just had to stop to check it out for lunch. 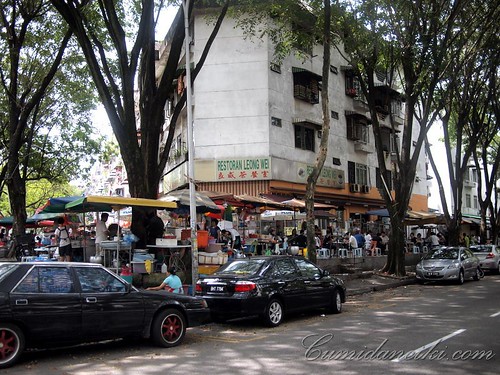 The place was packed. Loads of Chinese folk sitting outside in the blazing heat, under big colorful umbrellas stuffing their faces on Char Kwey Toew and Chee Chap Chok (Pork porridge/congee with huge, crispy deep fried pig’s intestine). Restoran Leong Wei on Jalan Kuchai Lama is not the most hygienic of places but you just need to close one eye. Think of the food – ask not where it came from.

I wanted to eat everything, including the Chee Chap Chok, then thought better of it, as I was already feeling hot and bothered. I would be sweating in my denim shorts and suffering from the heat of the porridge so I decided to eat the PIG INTESTINE SOUP noodles instead! Hah.. not much better, I know!

I also had the Char Kwey Teow – shiny with ingredients and steaming with promise.. and loads of aroma of the wok. Husband had the darker than night, Hokkien Mee – greasy, laden with Chee Yau Char (deep fried pork lard) and pretty tasty. 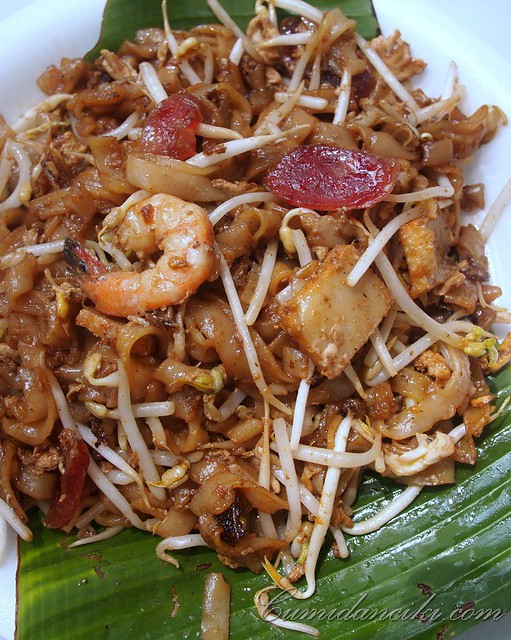 The Char Kwey Teow at RM5.00 was crunchy with taugeh (bean sprouts) and had a fair amount of chinese sausages and fried fish cake in it. 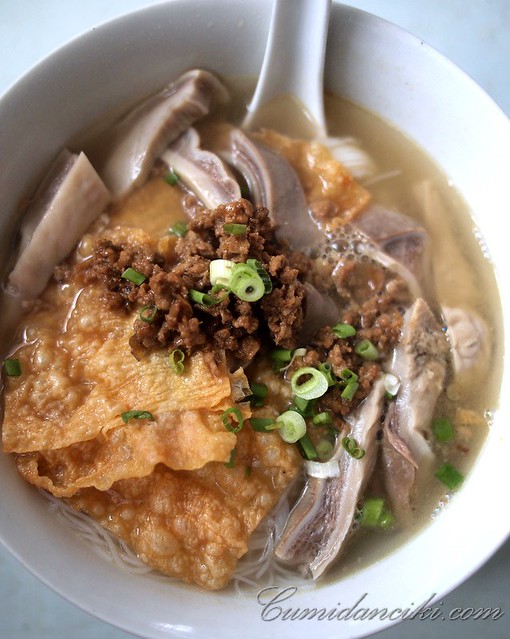 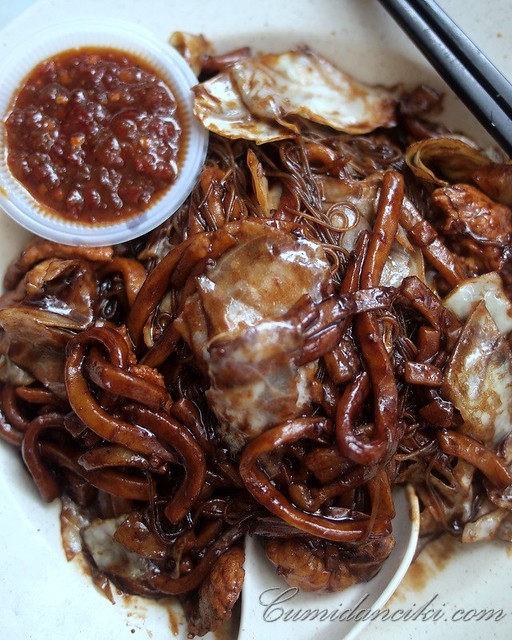 For just RM5.00 the Hokkien Mee came with 3 huge prawns and loads of pork meat. 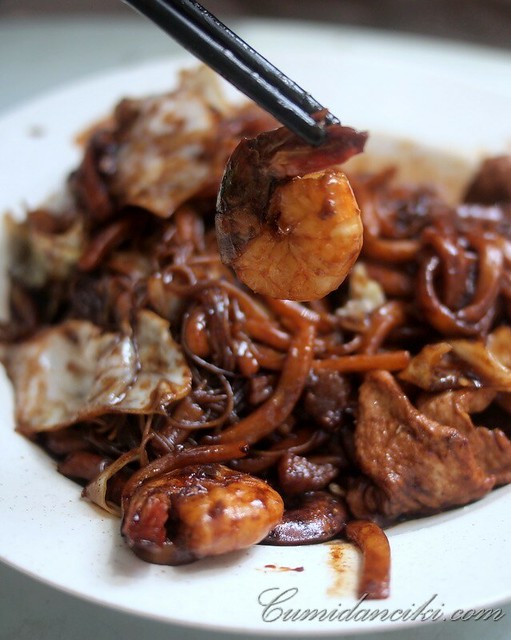 Ahhh.. for the love of good chinese food. Thank goodness there is life in the streets yet!

This place is good! We will come back to Restoran Leong Wei on Jalan Kuchai Lama to eat the Chee Chap Chok and other delectables soon. We also need to test if they serve us such big portions on our next visit again, as well. Who knows.. this place may soon be our new favourite, this side of town;)

The following week, we return the try the Pig’s Blood and Intestine Congee.. There was no keeping me away once I had my sights set on trying it. 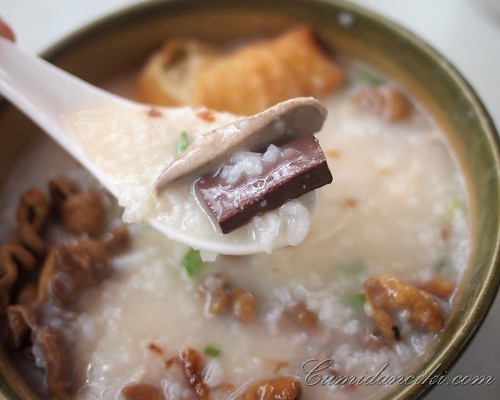 This is what pig’s congealed blood looks like. Rectangular cubes of dark-red pig’s blood is all some can stomach, really. Either you love it or hate it. I happen to be of the camp that totally digs it.

The stall where you can find this Deep Fried Pig’s Intestine Porridge is just on the edge of the hawker area. 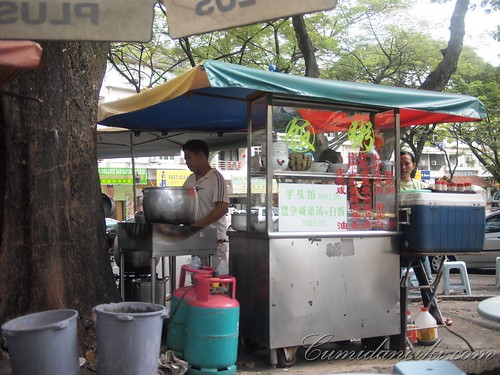 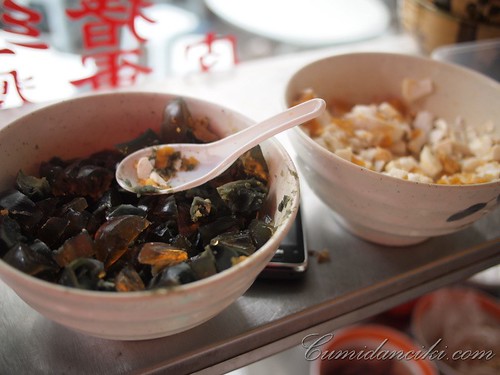 century egg and salted egg are essentials in any good porridge 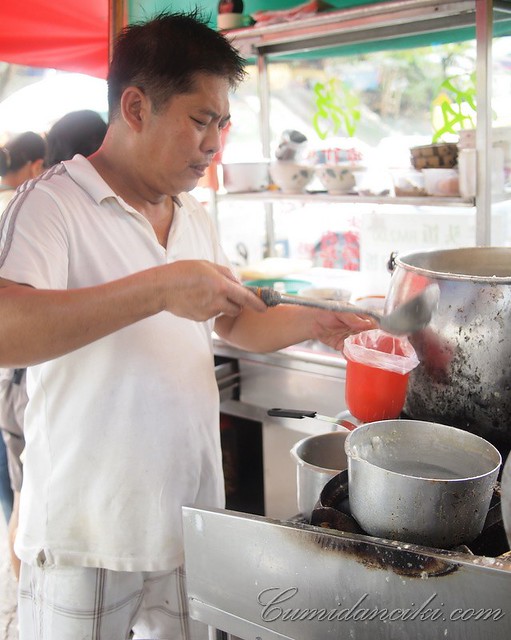 Some have it to take-away 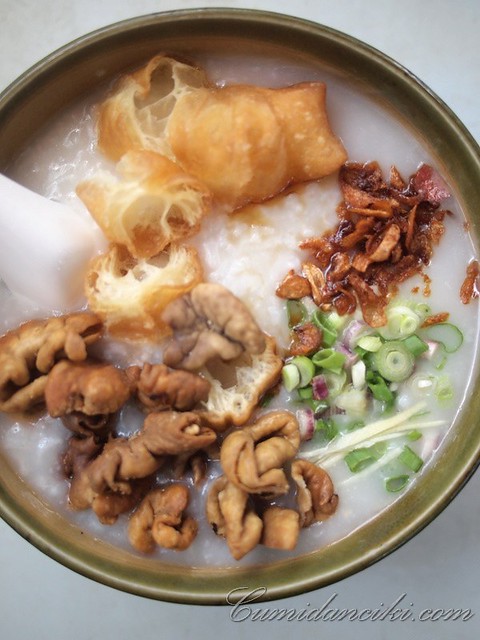 A gorgeous smattering of shallots, spring onions, strips of ginger, fried garlic and onion oil, tons of white pepper to taste and the customary yau-char-kwey, completes the ensemble. Takes a pretty picture, you think? 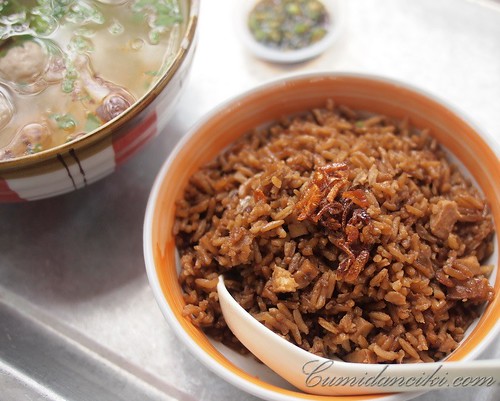 There’s also an equally delicious pork intestine glutinous rice, that comes with a side of pork soup, balls and innards 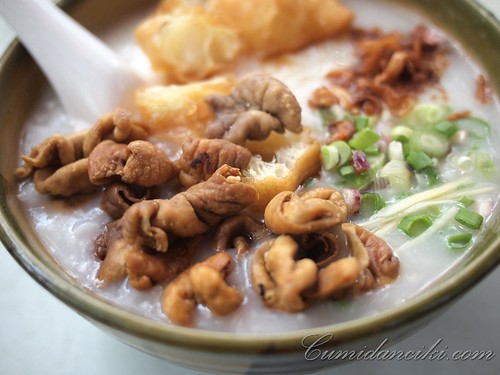 Ah… great balls of FIRE! Am sweating like a pig (forgive the pun) and loving every second and mouthful of it!

The Grand Hyatt Singapore. Finally, we have arrived! I always say that this is one of the most fabulous hotels to stay at, simply…