It’s always the humble foods that worm their way into our hearts. Displaced Malaysians don’t miss fine dining—they miss their neighborhood nasi lemak place. Travelling Italians yearn for pizza or a simple plate of pasta, wonderlust Californians long for proper tacos, and all this time, the globe-trotting German probably dreams of bratwurst.

In the main drinking and eating space at Pavilion, Weissbrau has created a tiny, bare-bones but jolly pub.. brick walls, fresh german beer on tap, the works. What people do not know too well however, is that the German food here is as good as the beer they serve. You order your beer, where four brews are on tap, and then plunk down at one of the haphazard communal tables or on a bar stool and place your order for food. This restaurant is seriously dedicated to high-quality German beer, as well as good old fashioned German/European dishes, and you won’t find a token vegetarian option unless you count sauerkraut, spätzle, or potato salad as vegetarian:P

On a Thursday night, the place was full and rowdy, with people sitting at the bar, standing, and sharing tables cluttered with tall, teetering glasses of German beers and plates of french fries and finger food.  But on a Monday night, it is sometimes much quieter, with mainly a drinking crowd. The Weiss beers are a heaven sent. A puckeringly zesty beer with a nice fruity after taste. This beer was only too easy to drink. 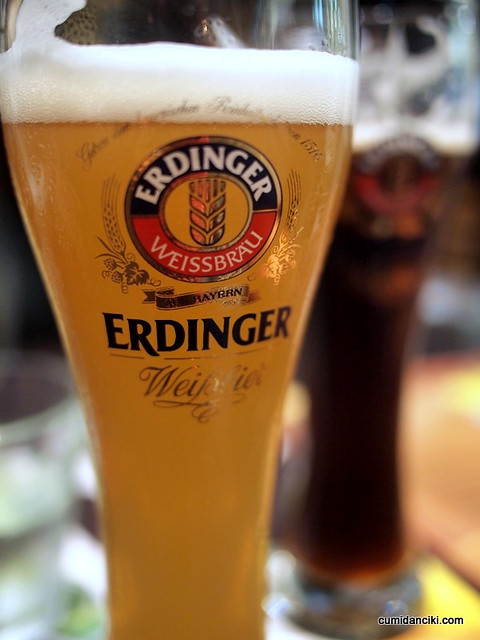 The Erdinger Weissbier is a Bavarian style brewed beer with an outstanding and unforgettable wheat beer flavor. This is my absolute favourite beer. The Erdinger Weissbier ‘dark’ is a rich and smooth wheat beer and owes its full-bodied flavor to the fine hops and dark malt used in its production. Cumi likes them dark. I usually prefer to go blonde. 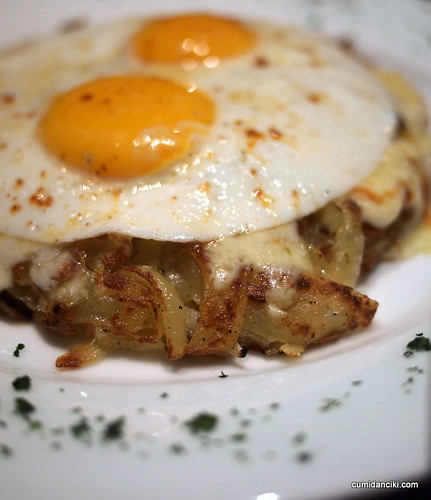 This is a traditional swiss potato dish with pan fried with butter, onion, cheese and topped fried egg. Rösti is a Swiss dish consisting mainly of potatoes. It was originally a common breakfast eaten by Swiss farmers and many Swiss people consider rösti a national dish. Today, rather than considering it a complete breakfast, it is more commonly served to accompany other dishes such as Cervelas or Fleischkäse. 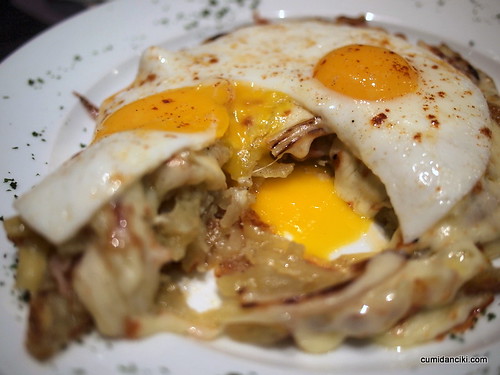 The Rösti served at Weissbrau is fantastic as it has bits of ham in it. Just look at the runny egg yolk. Eating carbs is just away too much fun. I am finding it hard to resist I tell you. 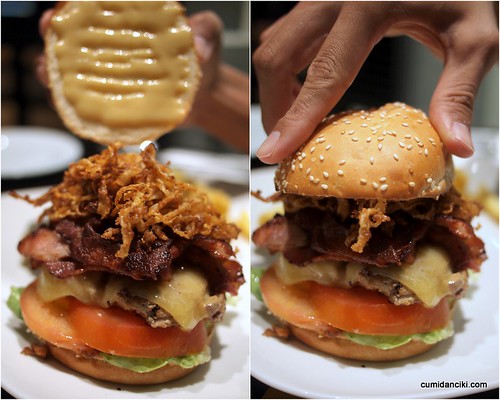 A handsome, hearty burger with a huge-ass juicy pork meat patty! The crispy onions, fatty bacon and melting cheese will have you quaking at the knees. An awesome tasting burger. Highly recommended. 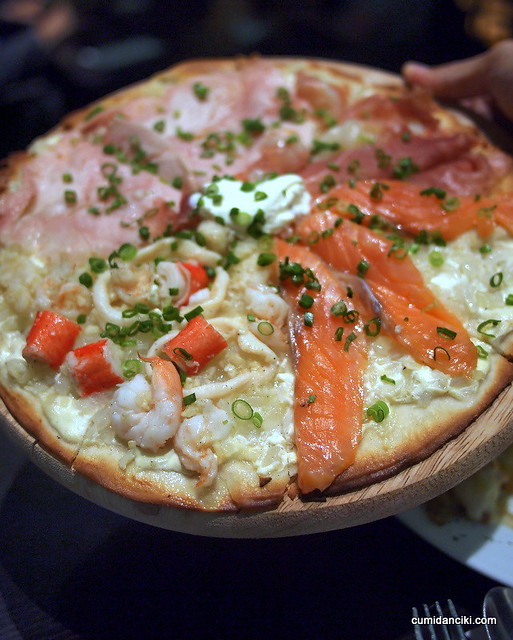 A nice and light option if you don’t feel like the heavier pizza. The flam served at Weissbrau is nicely charred on the edges with a succulent center. The ingredients are superbly fresh. 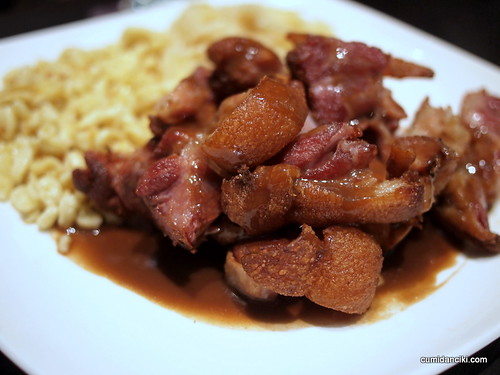 Pork knuckle served with sides of Spätzle and sauerkraut – RM48.00

Whilst the knuckle itself was slightly overcooked and hard on the outside, the Spätzle was fabulous. Spätzle literally translated from German as “little sparrow,” and is a dish of tiny noodles or dumplings made with flour, eggs, water or milk, and salt. In Germany, Spätzle is served as a side dish much like potatoes or rice, and is often accompanied by a sauce or gravy. All I can say is, more carbo loading. 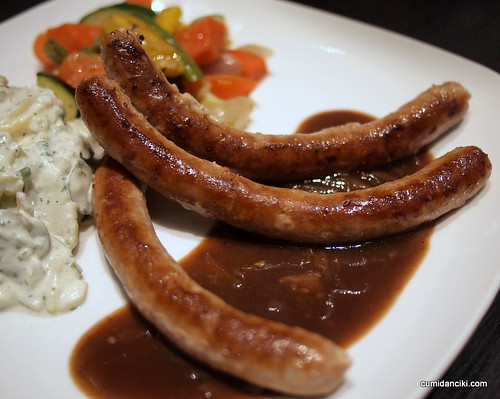 Most everybody loves a good Bratwurst. The name is derived from Old High German brätwurst – brät, which is finely chopped meat and -wurst, or sausage. Oh yeah, I know a good Bratwurst when I see one. Perhaps the most popular sausage in Germany is a small, thin bratwurst from Franconia’s largest city, Nuremberg. It is surprisingly small being only 7 to 9cm in length (only) and weighing between 20 and 25g. Presenting the Nürnberger bratwurst.

The ones served at Weissbrau are delicious, pork-based,  typically seasoned with fresh marjoram which gives them their distinctive flavour, and barbecued over a fire. Served with either sauerkraut or potato salad, and accompanied by a dollop of horseradish or mustard, this dish goes perfect with beer. 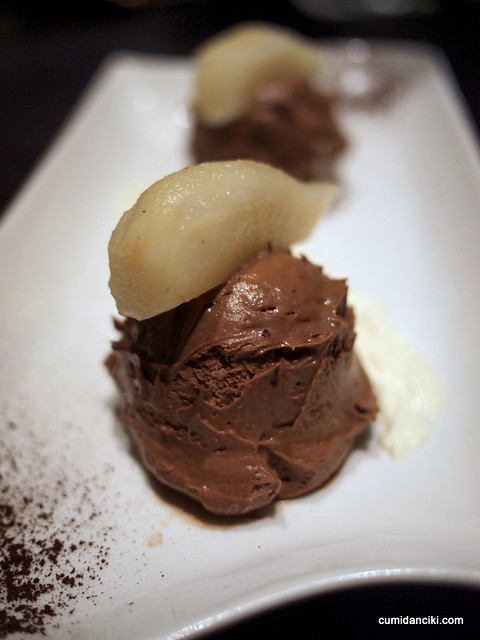 Chocolate mousse dessert- not my favourite as it was super sweet, but smooth enough I suppose. The pear’s were rather tasteless. We could have skipped dessert as the other dishes were hearty and delicious and we will definitely be back for more!

(this post is sticky – will be kept at top of blog till wed. scroll down for latest posts) Happy New Year Readers! Here…