Today’s Chef in the Spotlight is none other than Max Chin, better known as just Max.. a super-talented chef who owned and ran Max! Kitchen and Wines Restaurant before moving his restaurant to a more spacious location that was known as Max @iHaus Western Dining, Wines & Events. He is on the precipice of change, and Cumi & ciki are totally psyched and privileged to get the scoop on his story..

Right from the moment you meet him, you will like him. I mean, what’s there not to like? For starters this guy looks like a Chef.. big, burly and with a warm smile, Max is the kind of person you would want to spend many hours with, chatting about food, travel, life in general even..  over a cup of coffee.

A conversation with the man indicates someone who is discerning and passionate about food. He also finds pleasure in the simple things things in life, like a non pretentious lunch at one of his favourite Chinese restaurants in KKB (Kuala Kubu Baru). Family is important and Max has regular  “makan sessions” (eating excursions) with his family members, as often as time will allow. 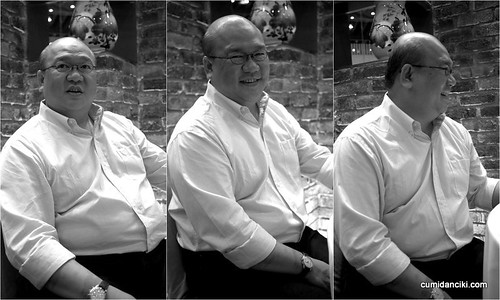 If you are patient and and sit long enough to peel off the layers to uncover what makes this man tick, you will find underneath that casual easy going exterior, a guy with razor sharp wit yet a great sense of humor. He likes his food, his wine and his cigars. Max’s culinary expertise was first tested at the age of ten, when he would cook fried rice from leftovers in his own home. Max’s first passion has always been F&B. In 1984, he was sent to train at the  Switzerland’s Hotel Consult in Hotel Management but for some strange reason or other, fate kept pushing him into the kitchen. Upon graduation, he joined  the famous Movenpick Restaurant in Singapore and had never looked back since. At 26 years old, he was the youngest executive chef  and since then he has been globe trotting from one international hotel chain to another. His credentials are super impressive- Shangrila Xian, J.W. Marriot , Sheraton Hanoi, Melia Hanoi,Crowne Plaza Hainan.. I look at him and wonder why we have not had this chat sooner.

Anyway, sitting with the man himself over lunch, the questions that fill my head and that I am dying to ask him include..

1. ..traveling so extensively in the course of his work, has he ever had any harrowing experiences or ever been in danger?

Sure, he says. He was in Crowne Plaza for 18 months when the Tsunami hit Phuket. He was right in the thick of things in Grand Melia Bali when the Bali bombing happened and 2 and half years later he was, Executive Chef at Crowne Plaza Jakarta when bombing at the Jakarta Marriot occurred just two years after he started working there.

2. Has he ever been afraid.. scared for his life?

No, says Max.. you cannot change your destiny nor live in fear of what you cannot control. Being so close to the natural disasters/terrorist attacks and yet being spared, reminds him of how the protection of God has been upon his life. Not scared. Blessed.

3. What were some of his achievements abroad?

In times of crisis , he managed to turn things around in his favour. For example, it was in Crowne Plaza where he turned around the hotel’s business despite the lack of tourist and difficult times right after the bombings. He started to build a reputation for himself when he organized  an event with the Australian embassy and later Qatar Airways.

4. A lot of people call Max’s food or cooking style, fusion. Is it fusion?

5. What are his favourite tools in the kitchen?

A sharp set of knives and a good fire!

6. What does he eat, when he is not cooking in his kitchen?

Max tells us that he loves a good bowl of Pork Noodles (Chee Yoke Fun, in Cantonese). Nothing comes close!

No, he has no time. All his time is spent in the restaurant business and in his spare time, his recreational activity is to go hunting, off the beaten path, for good Chinese food.

8. What brought him back to Malaysia?

At the age of 39 years , he decided that it was time to start on his own and he started Max’s Kitchen in Pudu. From working in big hotels, he started a quaint small dining place where patrons could watch him cook and this is his real passion. The open kitchen concept where diners can eat and chat with him is really where his heart is. Then 3 and half years on, Max moved on to [email protected] – a place that was more spacious, with ample parking for his customers, unlike Max’s kitchen which was sorely lacking in space. However, there were pros and cons. At Max iHaus, the place lost its charm in terms of that open kitchen concept. Max was no longer seen so often at the front of the kitchen. There was less interaction with the Chef.

Fine, so that is a bit about the past. Which brings us now, to the present.

After working for more than two decades with various five-star hotels in Malaysia, Singapore, Thailand, Vietnam, Indonesia and China, and running his own restaurant, it is now time to do something innovative and new. Soon to be launched will be Max’s newest concept in restaurant dining. He will craft dishes from seasonal ingredients without a fix ala carte menu which is going to be the first of its kind in Malaysia. The customer will eat what ever the chef decides to cook for that day!

This concept, also known as a ‘private kitchen’ has been widely practiced in Hong Kong and Singapore and also by most high end restaurants in the dining capitals of the world.

The real adventure here is to cook up a meal by going ‘off menu’..

The real adventure here is to cook up a meal by going ‘off menu’. His creations mostly depend on what he feels like cooking on that day. His challenge will be to produce simple yet exquisite dishes with a touch of French influence, using the freshest everyday natural ingredients found locally and abroad.

Regular diners will never tire of the restaurant’s menu as they go on a different casual experience every time they visit. They just need to show a little faith in the Chef, to improvise a variety of dishes and I don’t know about you, but I am pretty sure that Max will deliver;)

One benefit of this concept is that it creates interaction between the kitchen crew and the guests. Not only that, Max will recommend wines to compliment the food, from an eclectic collection of fine wines to the establish classics boasting arguably the largest collection of First Growth Bordeaux in the country.

You just need to show a little faith in the Chef, to improvise..

When asked, when this new restaurant is set to be launched, Max smiles secretively answering only that it should be sometime in October. He has great plans for the launch were only an invited list of guests will dine on a special menu, crafted by Max and a small donation will be taken. This money will go to charity. The location of his new restaurant is in Solaris Dutamas, one of the up and coming locations for dining,  in Kuala Lumpur. 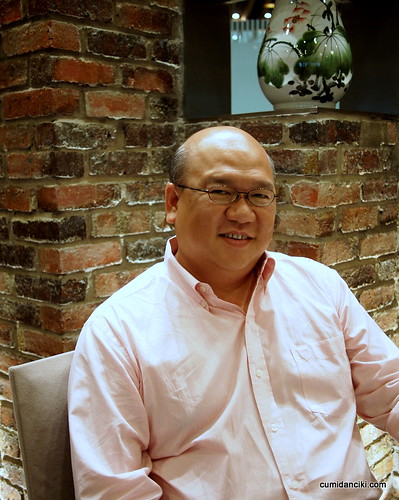 9. So, what will you call this new place of yours Max?

Millesime. It is pronounced Millésimé , which is the French word for Vintage. This place will be cosy, minimalistic.. no big signage.. just about people dining on simple, great food. Yes, I am talking about 1800 sq feet of space consisting of an open kitchen, a wine area and YOU.. ah, you will be sitting in the middle of that space. Millesime is aimed to impact you, in a big way, on the dining experience itself.

This food will be different from Max Kitchen and different from iHaus. The meals will consist of 4 to 5 course degustation menu , accompanied by some terrific wines. The Chef will surprise you with his changing menu every time you visit. Cigars will be available for the avid cigar smoker as well.

No, because it is time to move on to bigger and better things. One needs to constantly improve oneself and this next endeavor, Millesime, is the natural progression of things. This is what I live for. The challenge of something new.

November 88 till February 91: Truffles at The Dynasty
The Dynasty Hotel Singapore

Timing is everything. And so when an old friend of ours in the hospitality line told us that Shama Lakeview Asoke Bangkok, the latest…