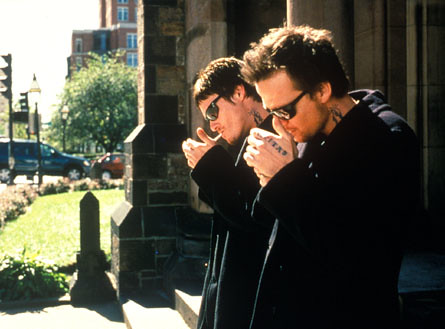 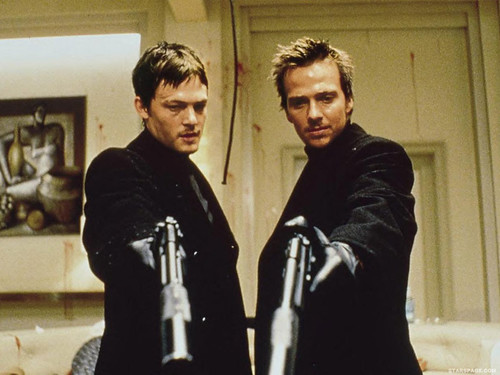 I liked the show initially because of the cool concept of two, young, handsome vigilantes, ridding the world of evil and crime. How chivalrous! I also particularly loved Dafoe’s over the top acting as a gay cop – check out the final scene when he dresses up as a woman – totally hilarious.

While I enjoyed the action spats in the movie and the eye-candy (like seeing dishy doubles!)  I don’t think the flick had a storyline that held water. A whole load of action scenes inter-cut with a flash-forward framework that promptly explains each action scene – it was a little too all over the place – like a Tarantino film gone wrong.  Overall, Boondock Saints is just a little bit less mindless than many B-grade  shootout flicks. It did not have a dense plot nor brilliant conversation. However, it did have actors like Billy Connolly, Willem Dafoe, and the super cool David Della Rocco (check out that facial-hair) who keep the show afloat.

We would only recommend this show if you have nothing else better to do, or watch on a rainy Saturday evening, and if you are huge fans of Sean Patrick Flanery and Norman Reedus.. (like me because they are SUPER hot!)

Bangsar Village 2 has gained a new Japanese restaurant, but it is also down by one sushi conveyor belt. Senjyu which has been repositioned…