This week’s Travel Tip by @TLWH features, the stuff that good horror flicks are made of. It’s gruesome and gory .. it’s a snack from the Philippines called the Balut.

Balut is one of the most popular treats in the Philippines amongst Filipinos. It’s found mainly towards the end of an afternoon and at night in many markets, and from vendors with carts along the streets. 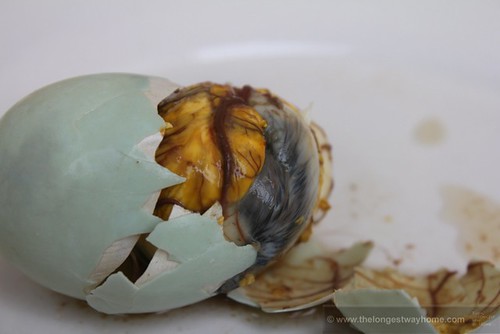 Balut is steamed or boiled duck eggs, with a difference. These eggs are fertilized and have a growing embryo inside. Sold in stages of development, 12 days, 14 days and 16 days the eggs take on a near gourmet quality to the Pinoy pallet. 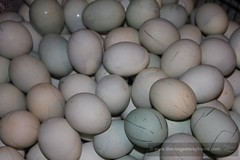 The most popular way to eat balut is to tap a hole on top of the egg, and to suck out the contents in several stages. Many mix this with adding a chili vinegar dressing into the hole, or plain salt. 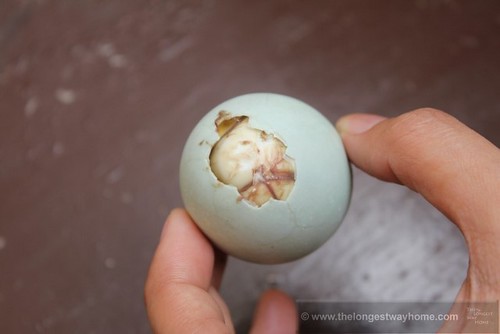 The egg shell is then peeled back as they get closer to larger parts of the egg, depending on its gestation period.

To the Filipino this is a food of taste, more than a visual feast. I’ve yet to see anyone actually savor the physical look of balut. And, no wonder.

Upon opening up a balut egg completely, one can see the duck fetus developing inside. Depending on the stage of development it can amass to little more than a ball of yolk, veins and gulp, right up to yellow yolk, red veins, black body and pink head.

I’ve seen balut at it’s worst with feathers included. And yes, I’ve witnessed someone eat it too. For now though, feast your eyes on a 14 and 17 day dissected balut egg! 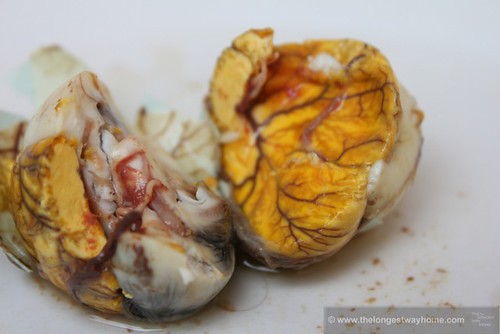 Balut is meant to be an aphrodisiac. It’s often found in drinking places with beer involved, so maybe that explains some things. However it’s most popularly found at night markets and eaten as a snack, or special treat. 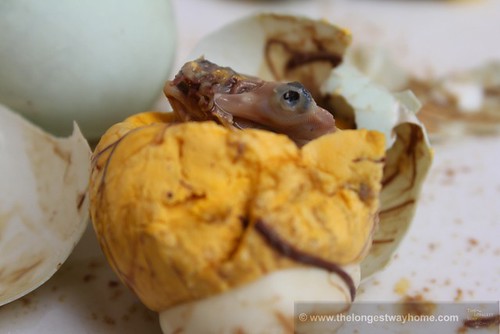 I see Balut just about everywhere in The Philippines. It’s something locals will ask tourists about, as a friendly tease. “have you eaten Balut,” and “have you tasted Durian?” If the tourist shakes their head and their is a Balut stand nearby the locals will crowd around and laugh as the disgusted tourist sees the nearly formed duck fetus. 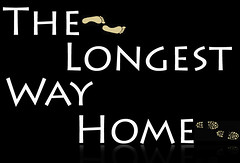 The who, how, why and what?
“A guy traveling the world in search of a place called home”. My name is Dave. I grew up in a fairly extreme family environment, in other words not so nice. I spent the greater portion of my life trying to leave a place I always knew was never my home. Working, saving, surviving and dreaming. My website  is a hanging wall for my photography, a shelf for my stories and a desk for my journal. Maybe something in my story can help inspire someone or motivate them to get through some rough times or push forward in their lives. If I can do this, so can anyone else!
Website: The Longest Way Home
Follow Dave on Twitter: @TLWH

Champagne and Brunches go hand in hand, and the latest, newest place to have brunch on a Sunday as you enjoy, not one, nor…